August 31, 2021: AWS KMS is replacing the term customer master key (CMK) with AWS KMS key and KMS key. The concept has not changed. To prevent breaking changes, AWS KMS is keeping some variations of this term. More info.

AWS Secrets Manager provides full lifecycle management for secrets within your environment. In this post, Maitreya and I will show you how to use Secrets Manager to store, deliver, and rotate SSH keypairs used for communication within compute clusters. Rotation of these keypairs is a security best practice, and sometimes a regulatory requirement. Traditionally, these keypairs have been associated with a number of tough challenges. For example, synchronizing key rotation across all compute nodes, enable detailed logging and auditing, and manage access to users in order to modify secrets.

However, rotating the keypair on all compute clusters’ nodes must be done in a tightly coordinated fashion, and failures generally result in availability risks. Moreover, the keypairs themselves are highly sensitive security credentials which must be carefully controlled with fine-grain access controls, detailed monitoring, and audit logging. These are precisely the types of tough challenges that AWS Secrets Manger solves for you.

The following architecture diagram presents an overview of the solution: 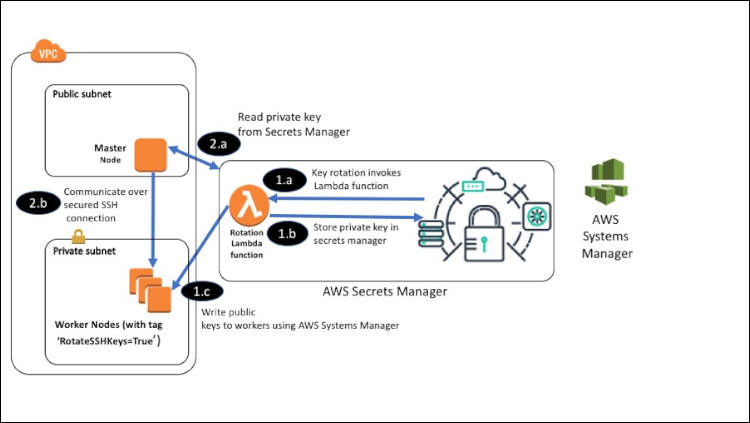 The sample architecture created by CloudFormation includes one master node, three worker nodes, AWS Secret Manager—which utilizes a rotation AWS Lambda function—and AWS Systems Manager. Setting up the cluster is out of scope for this post; in our walkthrough, we’ll focus on the keypair rotation architecture.

Secrets Manager uses staging labels to identify different versions of a secret during rotation. A staging label is a text string. For example, by default, AWSCURRENT is attached to the current version of the secret, while AWSPENDING will be attached to new versions of the secret before they have been verified and deployed to corresponding resources.

As shown in the diagram:

Today, this solution deployed in the N. Virginia Region will cost $0.0914 an hour for the four t2.micro EC2 instances and NAT Gateway that comprise the sample cluster. Secrets manager has a 30-day trial period, after which one secret will cost $0.40 per month and $0.05 per 10,000 API calls. There is no additional charge for AWS Systems Manager.

In this section, you’ll deploy a test stack that demonstrates the entire solution. After deployment, you’ll log in to the master node and securely copy a file to one of the worker nodes. Finally, you’ll use Secrets Manager to rotate and deploy a new SSH keypair. The CloudFormation templates and secret rotation code are available in the AWS GitHub repository.

Set up the sample deployment by selecting the AWS CloudFormation Launch Stack button bellow; by default, the stack will be deployed in the us-east-1 (N. Virginia) Region.

Next, create and configure a new secret from the Secrets Manager console to store the cluster communication SSH keypair.

The CloudFormation template did not deploy a secret, so follow these steps to create a secret from the console and rotation function configuration. To create a new secret:

With the secret configuration completed and the instances up and running, you’re now going to securely copy a file from the master node to one of the worker nodes, using the SSH key stored in Secrets Manager to test the solution.

Figure 6: The ssh login to master node, and the copy_file.py command

During execution, the python script will use the Secrets Manager get_secret_value API to retrieve the secret, which includes the private key. It will then use this key to establish a secure SSH connection with the worker nodes, without saving the private key on any master node storage.

You can review the copy_file.py on the master node or on GitHub. In the get_private_key() function, you can read the secret value, which includes the private key:

In the copy_file function, create a secured SSH tunnel to copy a file using the private key from memory, using Paramiko, a Python implementation of SSHv2.

The file has now been transferred successfully using a new key pair, with no updates required.

You can monitor and audit all APIs used to create and rotate your keys in Secrets Manager via AWS CloudTrail. To view CloudTrail events, follow these steps:

Additionally, Secrets Manager can work with CloudWatch Events to trigger alerts when administrator-specified operations occur in an organization (for example, to notify you of a secret deletion attempt).

Cleaning up the CloudFormation Stack

To delete the entire CloudFormation stack:

In this post, we demonstrate how you can use AWS Secrets Manager to store, rotate, and deliver SSH keypairs in order to secure communication within a compute cluster. Keys are securely encrypted and stored in AWS Secret Manager, which will also rotate the keys and install public keys on all nodes for you. By using this method, you won’t have to manually deploy SSH Keys on the various EC2 instances or manually rotate them. APIs associated with secrets management and rotation are logged in CloudTrail for auditing and monitoring. This key rotation solution is serverless. It does not require any servers to maintain and can scale rapidly.