Many customers adopting a cloud-first strategy prioritize serverless technologies and cloud file storage that offer automatic scaling, built-in high availability, and a pay-for-use billing model to increase agility and optimize costs. As customers adopt serverless architectures, they may need shared data access on a persistent storage layer. While AWS Lambda includes a 512-MB temporary file system for your code, this is an ephemeral scratch resource not intended for durable storage. SMB integration for Lambda allows you to share data across function invocations, read large reference data files, and write function output to a persistent and shared store.

Distributed applications like content management and web serving, home directories, and business-critical workloads can benefit from shared file storage. The following are some common serverless use case examples:

AWS Lambda supports multiple languages through the use of runtimes. There are several implementations of SMB in common programming languages, such as Python, .NET, Java, and Node.js. I demonstrate two Lambda functions with different runtimes. The first function uses a Python runtime and imports smbprotocol – an open-source Python library that implements the SMBv2 and SMBv3 protocol. The second function (an alternative for customers more comfortable with .NET) imports SMBLibrary – an open-source C# SMB 1.0/CIFS, SMB 2.0, SMB 2.1, and SMB 3.0 server and client implementation.

In the Lambda code provided, I implement two operations (store file and list shares) on a preexisting FSx for Windows File Server share. You can extend the operations to your needs by referring to the documentation for each respective 3PP library. I also detail security aspects and credential management using AWS Secrets Manager. 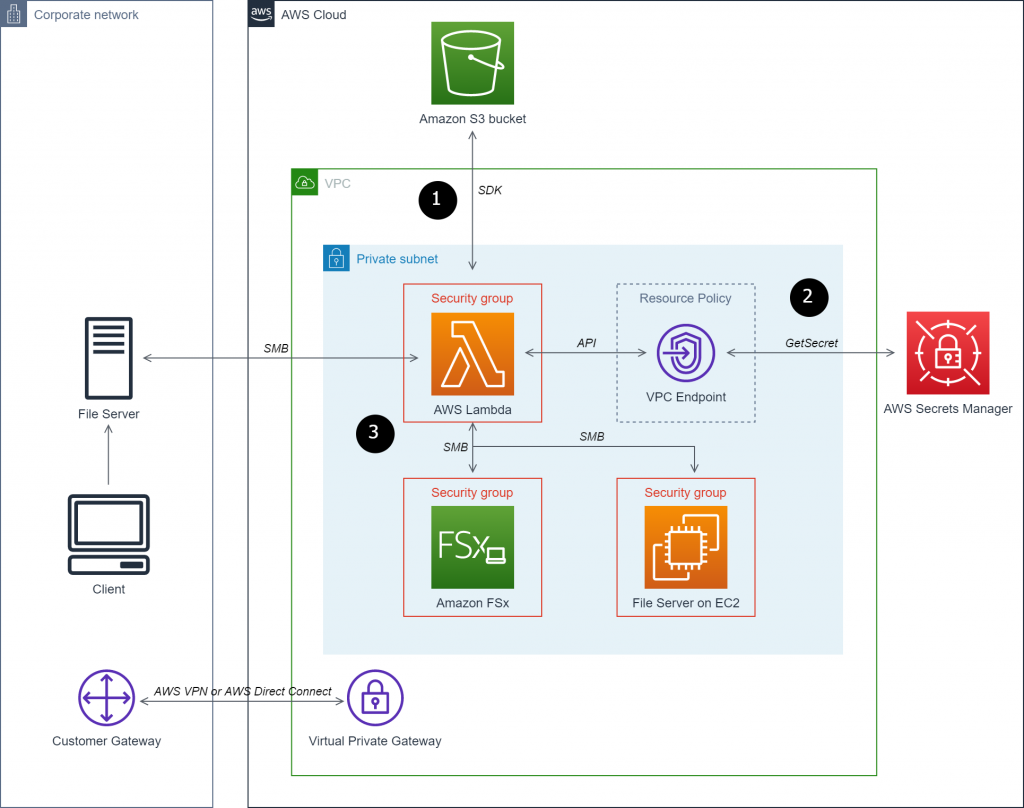 To deploy the example application, you need a few prerequisites:

Depending on the selected template, AWS SAM performs either action:

To test the integration, I show the steps for the Python runtime function:

1. Replace the dummy values in the created secret in Secrets Manager with the IP address or a resolvable hostname, server name, user name, and password of your file share.

Note: For Amazon FSx for Windows File Server, configure the host value in the secret with the ‘Preferred File Server IP Address’ found in the console.

2. In the Lambda console, select your function and create test event with payload from the json file in the repo. 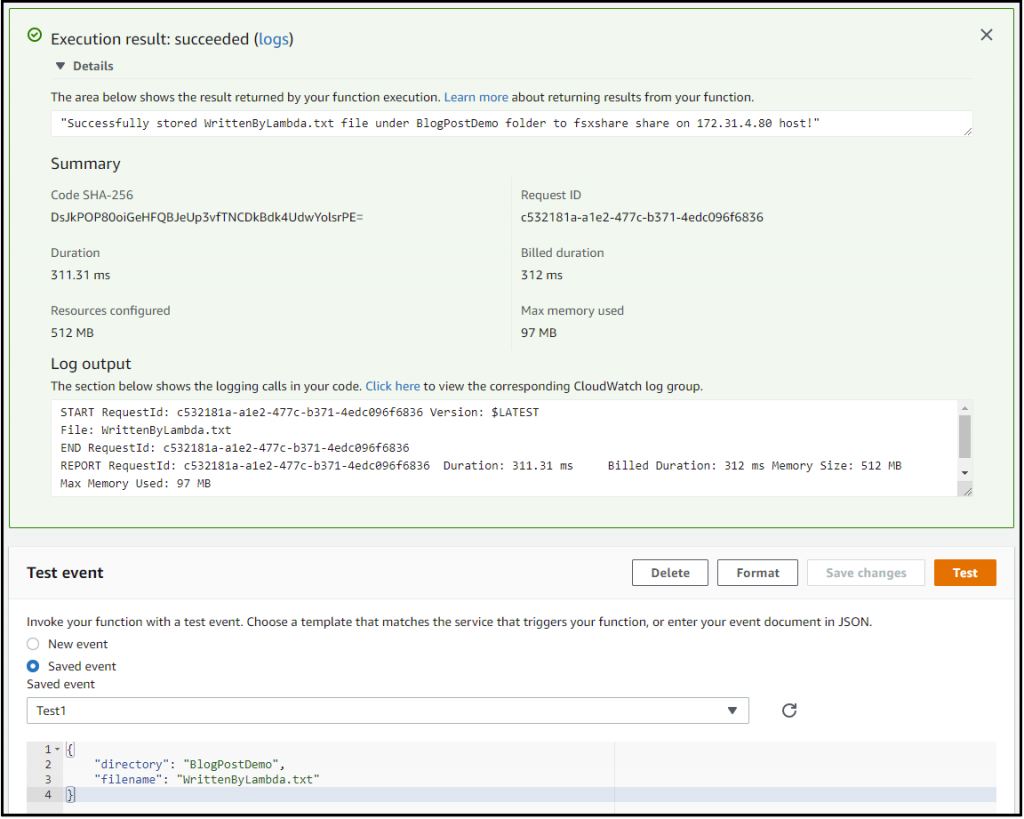 3. Verify that the file is created on the file share. 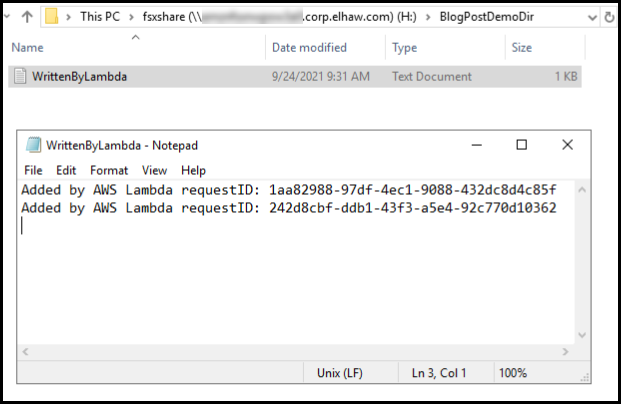 Figure 4: Test file is created on the file share

To verify file share access and file access, you can enable file access auditing and view the logs in CloudWatch if using Amazon FSx for Windows File Server. If your Windows file server is running on EC2 or on-premises, check the Windows Event Logs.

Per the Security pillar of the AWS Well-Architected Framework, apply security at all layers. Apply a defense in depth approach with multiple security controls to all layers (edge of network, VPC, load balancing, every instance and compute service, operating system, application, and code). Note: This solution is a proof-of-concept on how to achieve SMB access for serverless workloads. Customers should keep their security requirements in mind when developing their solutions.

In the case of on-premises file servers, you need Amazon VPN or AWS Direct Connect with routing rules that allow SMB traffic to pass through to the Amazon VPC.

The Lambda security group is configured with two outbound rules and no inbound rule:

The security group of the VPC endpoint of Secrets Manager is configured with one inbound rule:

The AWS Lambda function must authenticate with the SMB file share. A good practice is to avoid hardcoding credentials or storing in files or environment variables. For this reason, I integrate the Lambda function with AWS Secrets Manager to store and retrieve the file server credentials and parameters. Secrets Manager stores a secret in form of key-value pairs as shown in the following screenshot. We recommend customizing the name of the secret, and using a dedicated set of scoped-down credentials instead of Admin credentials.

Figure 7: A secret with configured credentials and parameters in AWS Secrets Manager

Secrets Manager provides code examples that illustrate how to retrieve the secret in your application. To view them, go to the AWS Management  Console>AWS Secrets Manager>Secrets>MySecretName.

Encryption at rest and in transit

In the following screenshot, I am sniffing the AWS Lambda function traffic on a Windows file server running on Amazon EC2. Similar behavior is expected for Amazon FSx for Windows File Server. You can see protocol negotiated to SMB 3.1.1 dialect, between the file server and Lambda. 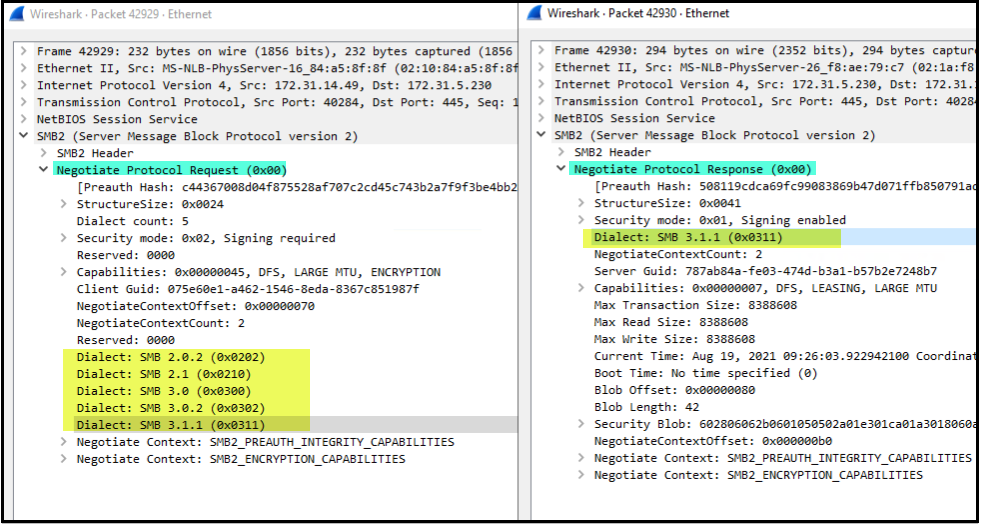 After the protocol negotiation is complete, you can see the encrypted traffic between AWS Lambda and the file server in the following screenshot:

You can restrict unencrypted access in Amazon FSx for Windows File Server for clients that do not support SMB 3.x, by enforcing encryption in transit as detailed in the documentation on best practices for administering Amazon FSx file systems.

Note: This configuration will fail any connected client (other than AWS Lambda function) to your file systems that does not support SMB 3.x.

In order for the Lambda function and the VPC endpoint of Secrets Manager to access my secret, I configure their inline policy as follows:

Additionally, I configure a resource policy for the secret stored in Secrets Manager. I tell Secrets Manager to deny any request explicitly unless it originates from a defined source SPC endpoint.

To clean up the demo:

In this post, I showed you how to integrate your Lambda functions with Amazon FSx for Windows File Server or Amazon FSx for NetApp ONTAP or SMB-compatible file shares using open-source libraries for Python and .NET. The demo solution is serverless and easily deployed with AWS SAM. I also walk through the security of all layers of the solution. This integration enables AWS Lambda to perform file operations on SMB-compatible persistent data stores.

Integrating AWS Lambda with Amazon FSx file shares allows you to share data across function invocations unlocking new use cases for Lambda such as automatically saving files to Windows home directories, taking programmatic actions upon file change events, or use cases simply requiring a larger and persistent data store for your function invocations.

You can experiment with other Lambda runtimes and open-source SMB libraries such as Java or Node.js based on your preference. All the demo artifacts are available on the GitHub repo and you can extend it to your needs.

Thanks for reading this blog post. If you have any comments or questions, don’t hesitate to leave them in the comments section.