How to create and manage users within AWS Single Sign-On

AWS Single Sign-On (AWS SSO) is a cloud service that allows you to grant your users access to AWS resources, such as Amazon EC2 instances, across multiple AWS accounts. By default, AWS SSO now provides a directory that you can use to create users, organize them in groups, and set permissions across those groups. You can also grant the users that you create in AWS SSO permissions to applications such Salesforce, Box, and Office 365. AWS SSO and its directory are available at no additional cost to you.

How to create users and groups in AWS SSO

You can create users in AWS SSO by configuring their email address and name. When you create a user, AWS SSO sends an email to the user by default so that they can set their own password. Your user will use their email address and a password they configure in AWS SSO to sign into the user portal and access all of their assigned accounts and applications in a single place.

You can also add the users that you create in AWS SSO to groups you create in AWS SSO. In addition, you can create permissions sets that define permitted actions on an AWS resource, and assign them to your users and groups. For example, you can grant the DevOps group permissions to your production AWS accounts. When you add users to the DevOps group, they get access to your production AWS accounts automatically.

In this post, I will show you how to create users and groups in AWS SSO, how to create permission sets, how to assign your groups and users to permission sets and AWS accounts, and how your users can sign into the AWS SSO user portal to access AWS accounts. To learn more about how to grant users that you create in AWS SSO permissions to business applications such as Office 365 and Salesforce, see Manage SSO to Your Applications.

For this walk-through, I assume the following:

To illustrate how to add users in AWS SSO and how to grant permissions to multiple AWS accounts, imagine that you’re the IT manager for a company, Example.com, that wants to make it easy for its users to access resources in multiple AWS accounts. Example.com has five AWS accounts: a master account (called MasterAcct), two developer accounts (DevAccount1 and DevAccount2), and two production accounts (ProdAccount1 and ProdAccount2). Example.com uses AWS Organizations to manage these accounts and has already enabled AWS SSO.

Example.com has two developers, Martha and Richard, who need full access to Amazon EC2 and Amazon S3 in the developer accounts (DevAccount1 and DevAccount2) and read-only access to EC2 and S3 resources in the production accounts (ProdAccount1 and ProdAccount2).

The following diagram illustrates how you can grant Martha and Richard permissions to the developer and production accounts in four steps: 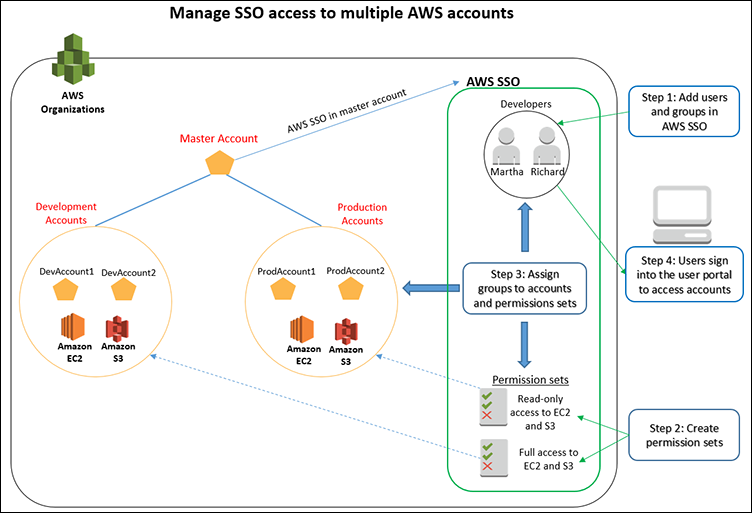 For this use case, you’ll create two permissions sets: 1) EC2AndS3FullAccess, which has AmazonEC2FullAccess and AmazonS3FullAccess managed policies attached and 2) EC2AndS3ReadAccess, which has AmazonEC2ReadOnlyAccess and AmazonS3ReadOnlyAccess managed policies attached. Later, in Step 3, you can assign groups to these permissions sets and AWS accounts, so that your users have access to these resources. To learn more about creating permission sets with different levels of access, see Create Permission Set.

Follow the steps below to assign the Developers group to the EC2AndS3FullAccess permission set and developer accounts (DevAccount1 and DevAccount2). To learn more about how to manage access to your AWS accounts, see Manage SSO to Your AWS Accounts.

You’ve successfully granted users in the Developers group access to accounts DevAccount1 and DevAccount2, with full access to Amazon EC2 and Amazon S3. 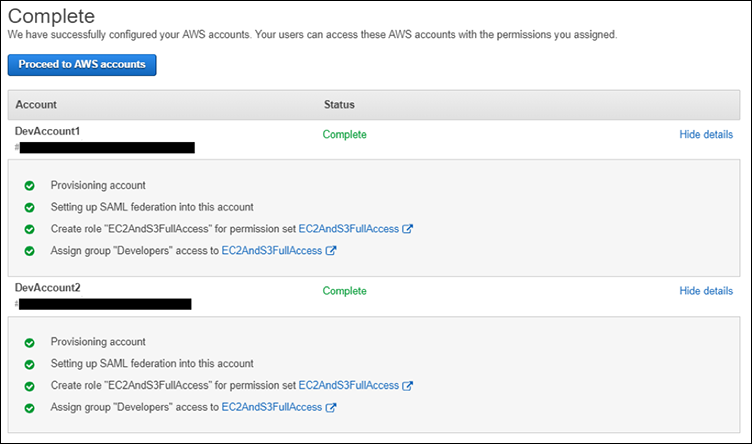 You can follow the steps below to see how Martha signs into the user portal to access her assigned AWS accounts.