In July 2015, AWS announced Amazon API Gateway. This enabled developers to build secure, scalable APIs quickly in front of a variety of different types of architectures. Since then, the API Gateway team continues to build new features and services for customers.

In early 2019, the team evaluated the current services and made plans for the next chapter of API Gateway. They prototyped new languages and technologies, applied lessons learned from building the REST and WebSocket APIs, and looked closely at customer feedback. The result is HTTP APIs for Amazon API Gateway, a service built from the ground up to be faster, lower cost, and simpler to use. In short, HTTP APIs offers a better solution for building APIs. If you are building an API and HTTP APIs fit your requirements, this is the place to start.

For the majority of use cases, HTTP APIs offers up to 60% reduction in latency. Developers strive to build applications with minimal latency and maximum functionality. They understand that each service involved in the application process can introduce latency.

With that in mind, HTTP APIs is built to reduce the latency overhead of the API Gateway service. Combining both the request and response, 99% of all requests (p99) have less than 10 ms of additional latency from HTTP API.

At Amazon, one of our core leadership principles is frugality. We believe in doing things in a cost-effective manner and passing those savings to our customers. With the availability of new technology, and the expertise of running API Gateway for almost five years, we built HTTP APIs to run more efficiently.

On the user interface for HTTP API, the API Gateway team has made the entire experience more intuitive and easier to use. 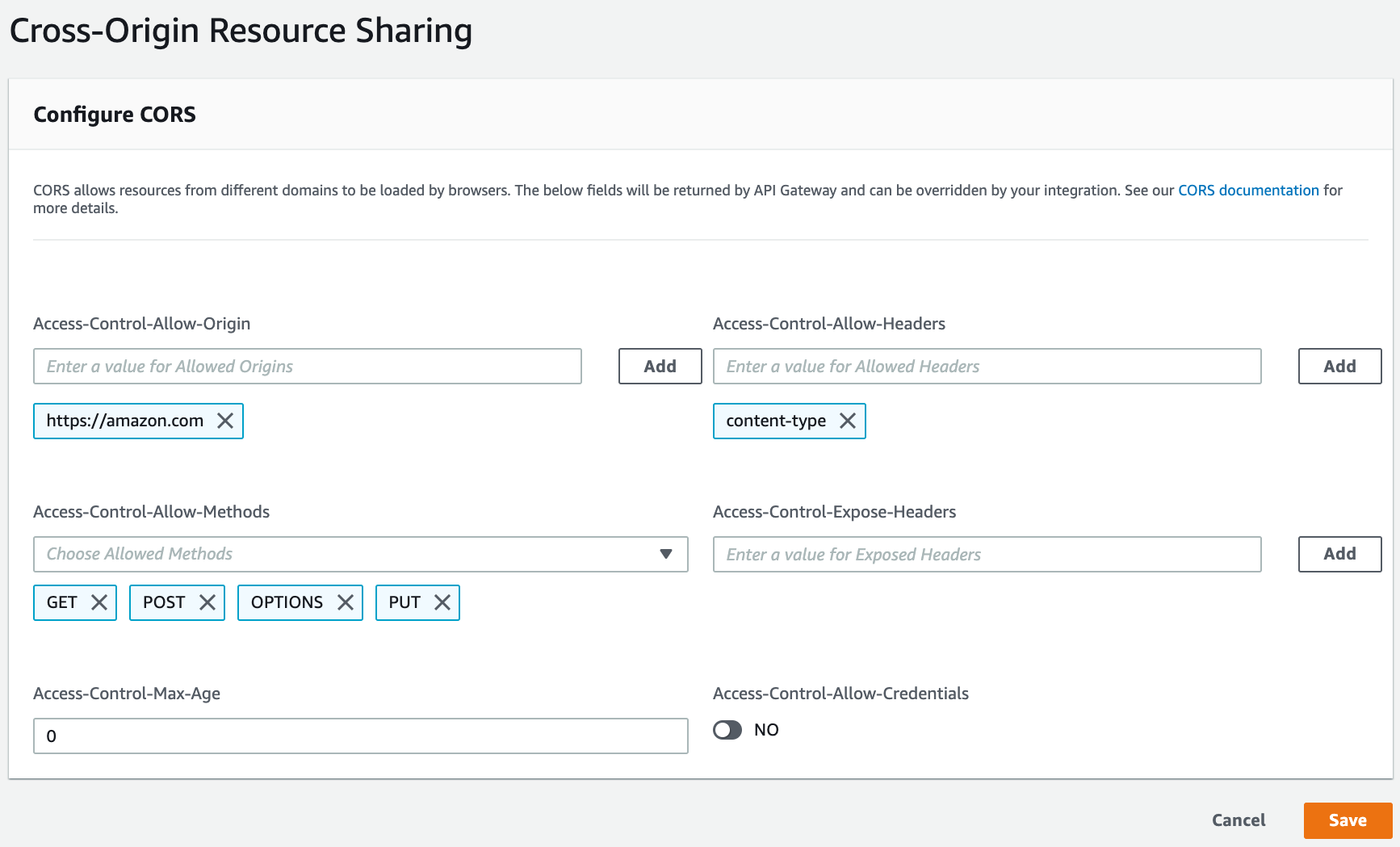 Another example is the configuration of cross origin resource scripting (CORS). CORS provides security by controlling cross-domain access to servers and can be difficult to understand and configure. HTTP APIs enables a developer to configure CORS settings quickly using a simple, easy-to-understand UI. This same approach throughout the UI creates a powerful, yet easy approach to building APIs.

HTTP APIs now offers developers the ability to integrate with resources secured in a Amazon VPC. When developing with technologies like containers via Amazon Elastic Container Service (ECS) or Amazon Elastic Kubernetes Service (EKS), the underlying Amazon EC2 clusters must reside inside a VPC. While it is possible to make these services available through Elastic Load Balancing, developers can also take advantage of HTTP APIs to front their applications.

To create a private integration, you need a VPC link. VPC links take advantage of AWS Hyperplane, the Network Function Virtualization platform used for Network Load Balancer and NAT Gateway. With this technology, multiple HTTP APIs can use a single VPC link to a VPC. Likewise, multiple REST APIs can use a REST APIs VPC link.

Previously, when building applications needing a consistent domain name, developers could only use a single type of API. Because applications often require features only available on REST, REST APIs are a common choice. From today, you can distribute these routes between HTTP APIs and REST APIs based on feature requirement.

HTTP APIs now offers the ability to do granular throttling at the stage and route level. API throttling is an often-overlooked API feature that is critical to the health of APIs and their infrastructure. By default, API Gateway limits the steady-state request rate to 10,000 requests per second (rps) with a 5,000 request burst limit. These are soft limits and can be raised via AWS Service Quotas.

HTTP APIs has the concept of stages that can be used for different purposes. Applications can have dev, beta, and prod stages on the same API. Additionally, for backwards compatibility, you can configure multiple production stages of the same API. Each stage has optional burst and rate limit settings that override the account level setting of 10,000 rps.

Throttling can also be set at the route level. A route is a combination of the path and method. For example, the GET method on a root path (/) combine to make a route. At the time of this writing, route level throttling must be created with the AWS Command Line Interface (CLI) or an AWS SDK. To set the throttling on a route of / [ANY] on the $default stage, use the following CLI command:

When you access the link for the dev stage, the dev stage variables are passed to the backend integration in the event object. The backend uses this information when processing the request. While not a best practice for passing secrets, it is useful for designating non-secret data, like environment-specific endpoints or feature switches.

When building dynamic integrations, it is also important to update permissions accordingly. HTTP APIs automatically adds invocation rights when an integration points to a single Lambda function. However, when using multiple functions, you must create and manage the role manually. Do this by turning off the Grant API Gateway permission to invoke your Lambda function option and entering a custom role with the appropriate permissions.

When using version 2.0, the response is simpler:

When HTTP APIs receives the response, it uses data like CORS settings and integration response codes to populate the missing data.

At the time of this writing, the AWS Serverless Application Framework (SAM) supports most features released in beta at re:Invent 2019. AWS SAM support for many GA features is scheduled for release by March 20, 2020.

For almost five years, Amazon API Gateway has enabled developers to build highly scalable and durable application programming interfaces. It has allowed the abstraction of tasks like authorization, throttling, and data validation from within the application code to a managed service. With the introduction of HTTP APIs for Amazon API Gateway, developers can now use this powerful service in a faster, lower cost, and better way.