In this post, I will tell you about Insider’s two-year journey of scaling up a production Elasticsearch cluster, which is a vital element for our recommendation and search products.

I will also describe the problems we encountered and how we fixed them by changing the configurations and architecture.

Amazon OpenSearch Service enables Insider to scale easily with almost zero downtime without the operational overhead and focus more on developing our products.

This post is written based on the knowledge and experiences of Insider’s machine learning engineers, and the main objective is to share the know-how and factors for Amazon Web Services (AWS) customers who are planning to conduct similar actions in the future.

Insider’s experiences in scaling Elasticsearch to cover increased customer usage can help you conduct in-depth research and identify the root causes of performance issues before making changes to increase the operational scalability of a technical component used in your business.

The Elasticsearch clusters are located within the same virtual private cloud (VPC) with other services that are using the cluster. It provides security, network cost optimization, and low latency.

There are periodical heavy write workloads and always-on read operations, performed by multiple APIs and Spark clusters. Write operations are being queued on Amazon Kinesis Data Streams by producers, and executed by a single AWS Lambda function in batches. 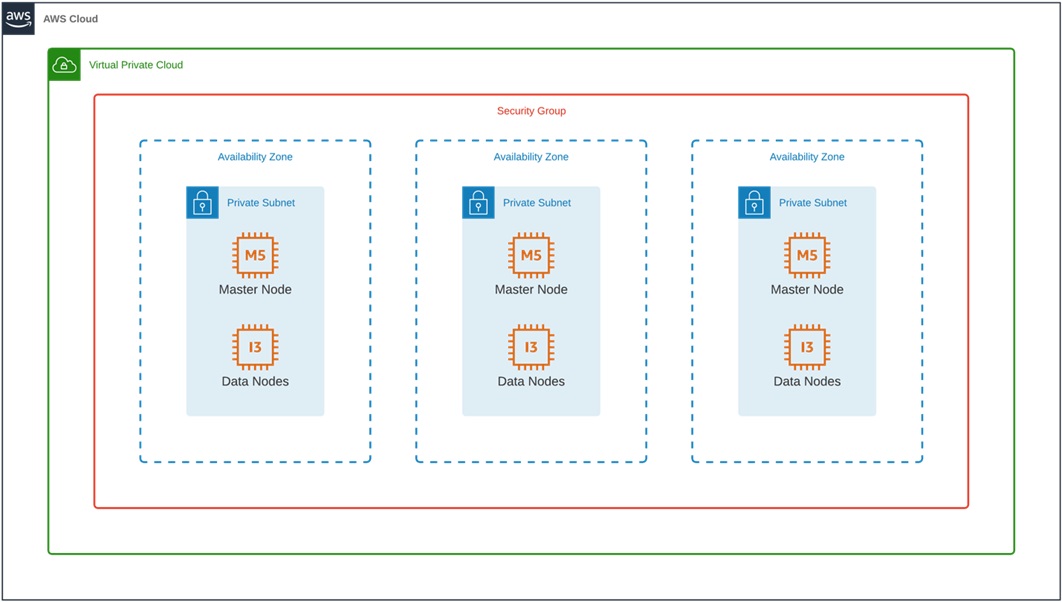 Why Do We Prefer this Architecture?

Our architecture did not spring to life out of the box, but evolved over time. At first, our primary cluster had M-series data nodes and no dedicated master nodes.

When the number of partners using the product and their data size increased, the number and volume of write operations also increased. Eventually, we started to face instant spikes on CPU utilization from 20 percent to 90 percent on the cluster.

The first thing we did was analyze the correlation of health metrics. We realized that CPU spikes were matching with heavy write loads, so we investigated our pipeline.

The problem was that we were running too many parallel operations that were using the same database and performing direct batch writes at high volumes. 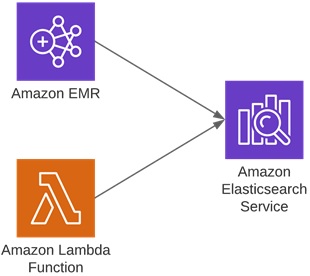 We took several actions to prevent the situation. One was a quick solution, and the other was the real solution.

The fastest solution to apply was changing Elasticsearch configurations. When Elasticsearch performs a write operation, it should also index the document for search queries to find it. This is a costly operation.

Configuring Elasticsearch indices was easy, but not enough to avoid another incident in the upcoming months. Therefore, we decided to refactor the pipeline architecture and perform write operations from a single point to the Elasticsearch cluster.

Since we had multiple parallel operations we had to queue their write requests somewhere and perform the write operations from another place. We selected Amazon Kinesis Data Streams to queue up the documents with their metadata about the index and document ID.

We used AWS Lambda to be triggered by Amazon Kinesis events, and perform write operations as batches to the Elasticsearch cluster, as shown in Figure 4. This introduces a little lag on write requests, but in our case, it was not a problem from the business needs perspective.

Benefits of the New Architecture

This approach gives us a lot of elasticity. Since the Lambda function controls the batch size and flow rate of the write operations, we can parallelize our compute as much as we want, and then pump the results to Amazon Kinesis Data Stream in less time.

This allows us to tweak the batch size and IOPS rate in the production environment within seconds by configuring the Lambda function, which has an immediate effect.

Finally, in case of any incident or migration situation on the production cluster, we can stop the write operations without stopping the computation by simply disabling the Lambda function.

All the write requests continue to line up on Amazon Kinesis Data Streams and, when the aforementioned situation is handled, the Lambda function is re-enabled and writes are performed without any data loss.

Having write operations from a single point fixed the issue for good, or so we thought. Six months later we experienced the CPU spikes again. At that time, we had much more data and requests compared to the previous time, and started to investigate the problem.

As a quick action, we replaced data nodes from M series to C series, which have better CPU performance. After all, if you are experiencing CPU issues, why not improve your CPU? Well, it was a wrong decision and the situation got worse.

When we examined how Elasticsearch controls JVM garbage collection, we understood the root cause. The old generation pool was filling up and full garbage collection was being activated too frequently, which happens when JVM memory pressure hits 75 percent.

We realized our main issue had been the memory and heap space all along. We changed data nodes to R instances, which are memory-optimized.

The Problem Hits One Last Time

We did not experience any issues for months—until we did. We recently got another hit by the very same cluster, as its usage had increased a lot by that time. After investigating the slow query logs, we realized that some queries were generating extreme loads.

First, we optimized those queries, but it was not enough. We then investigated health metrics using Cerebro, an open-source admin tool for Elasticsearch, and realized we needed more IOPS on data nodes.

We also realized that while some indices were big, some of them were very small and using the default five shards settings was an overkill. To fix that, we decreased the number of shards and also increased the replication factor for big indices while keeping it at two for small indices.

You need to play and do some benchmarking with that replication and sharding settings to find the sweet spot for your data and cluster. Since then, we are perfectly running high load operations on the production cluster without any interruption to our services.

At Insider, we have been using Elasticsearch for a long time and are satisfied with its performance and features. We had a couple of issues when we scaled up its usage, but we fixed them by making changes on configurations, architecture, and hardware.

We realized that fixing symptoms without understanding the root cause may lead to worse scenarios, and learned the hard way the importance of identifying the real issue as soon as possible.

If you’re interested in further reading to help tune your Elasticsearch cluster, check out the documentation to learn how to: tune for indexing speed, tune for search speed, tune for disk usage, and size your shards.