Amazon EKS provides a Kubernetes management infrastructure across Availability Zones (AZs), so you don’t have to manage a control plane or replace unhealthy control plane nodes. In addition, Amazon EKS is fully Kubernetes-compliant, so you can easily migrate applications that are running in standard Kubernetes environments.

XebiaLabs supports infrastructure provisioning and application deployment for many of the most popular AWS services, including Amazon EKS.

We recently introduced a feature called DevOps as Code. This makes it even easier for your teams when they’re getting started with Amazon EKS, or migrating applications to Amazon EKS infrastructure that they’ve already set up.

Going Code-Native with DevOps as Code

The XebiaLabs DevOps as Code approach allows your teams to define all of the components of their DevOps pipeline in code so they can version control and audit with ease.

DevOps as Code lets you create cloud infrastructure, environments, release templates, dashboards, and more in YAML files that you can share across projects, applications, and teams.

DevOps as Code also includes blueprints, which guide your teams through a process that automatically generates YAML files for their applications. A blueprint asks a short series of questions about the application and type of environment it requires. The XebiaLabs command line interface (CLI) uses the answers to generate YAML files that define configuration items and releases, plus special configuration files that manage sensitive data such as passwords.

XebiaLabs provides out-of-the-box blueprints that you can use to experiment with the XL YAML format. Use them to get acquainted with XebiaLabs products, and to see what a typical release to a platform like Amazon EKS looks like.

Using a Blueprint to Deploy a Sample App

Let’s take a look at a sample blueprint that deploys a microservice-based application on Amazon EKS.

The XebiaLabs DevOps Platform offers release orchestration and deployment automation that helps you launch applications to production in minutes. You will also want to install the XebiaLabs CLI.

Make sure to remember the admin passwords you create during the installation process, as you use them later to log in to the GUI.

Open a command prompt and navigate to the location where you’d like to save your XL YAML files. Execute the xl blueprint command to access the XebiaLabs blueprints, and then select the aws/microservice-ecommerce blueprint.

Here, you must provide some basic information, such as the name of the application, keys for accessing your AWS account, and the AWS Region where you want to run the app. If you’re new to Amazon EKS, you can choose to have XebiaLabs create a cluster for you. If you already have an Amazon EKS cluster up and running, XebiaLabs can deploy the application there instead.

In the final question, when asked about the XL Deploy URL, accept the default answer.

The XL CLI generates everything required for deploying an application to Amazon EKS, including YAML files and AWS CloudFormation templates.

Open the YAML files in a text editor to review the code the XL CLI generated. For example, the screenshot in Figure 1 describes the package that XebiaLabs uses to provision Amazon EKS worker nodes and save the output data (for example, the cluster endpoint). 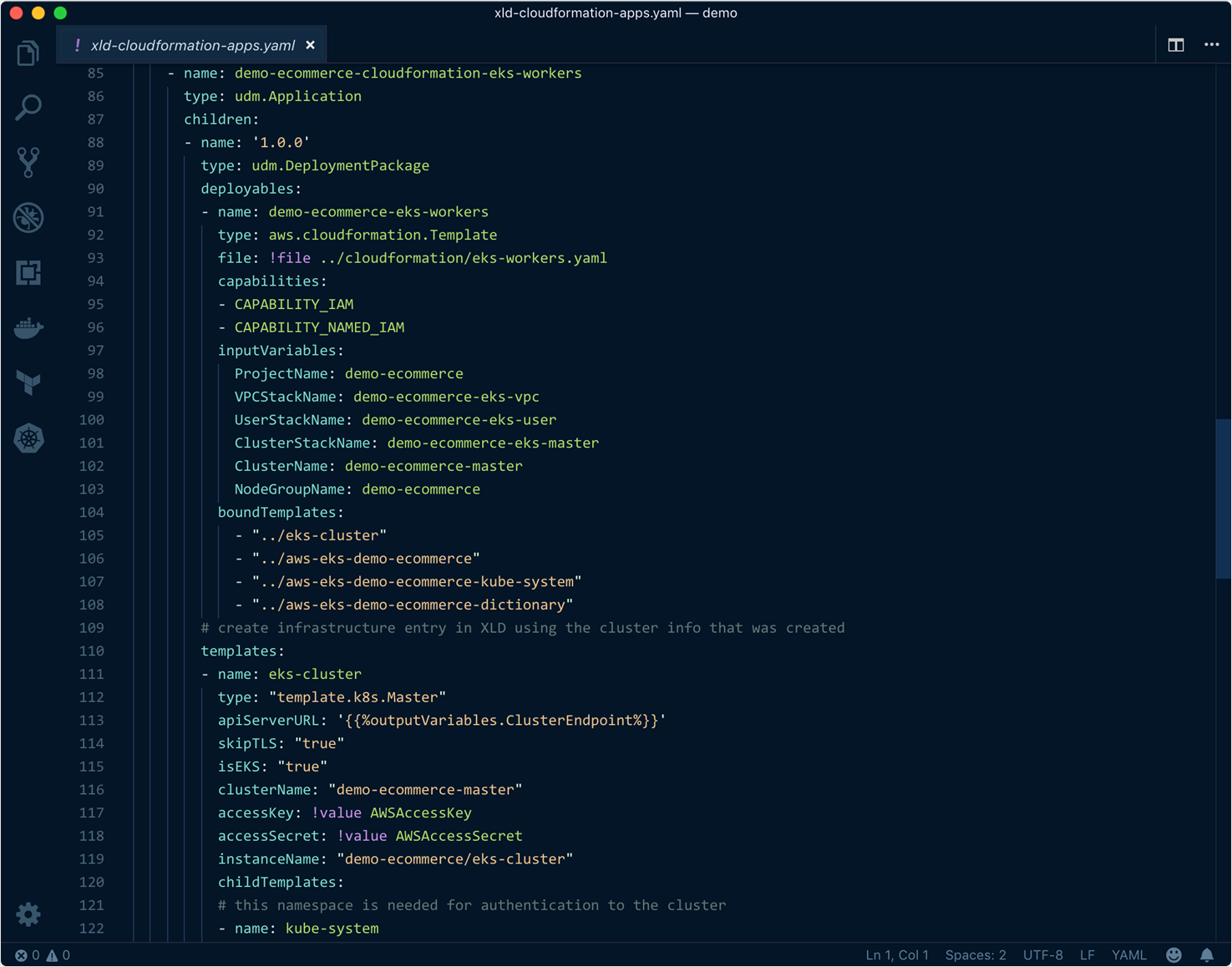 The following screenshot shows the portion of the release template you can use to provision the Amazon EKS cluster and deploy the sample application. 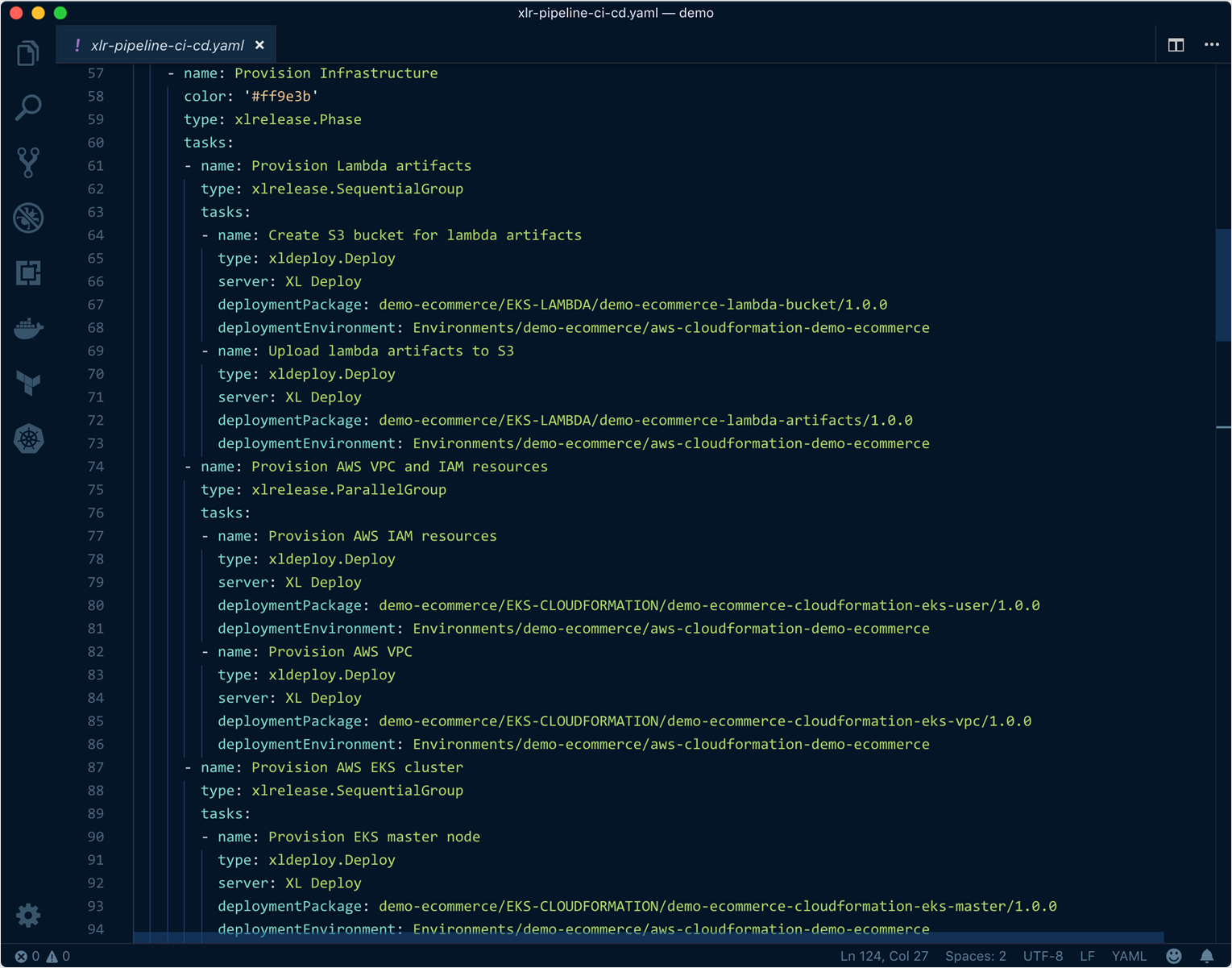 Figure 2 – YAML file showing the portion of the release template that can be used to provision the Amazon EKS cluster and sample microservice application.

The XL CLI created a xebialabs.yaml file that points to the other YAML files it requires. You can apply the code by running the following command:

When you apply the code, XebiaLabs creates infrastructure and environment configuration items, deployment packages, and release templates based on the information in the YAML files.

After applying the YAML files, log in to the XebiaLabs DevOps Platform.

In the XL Deploy GUI of the XebiaLabs DevOps Platform, you see the following items in the tree on the left side:

In the XL Release GUI of the XebiaLabs DevOps Platform, you see the following items under Templates:

Step 5: Provision the Cluster and Deploy the App

Open the CI/CD release template in the XL Release GUI. 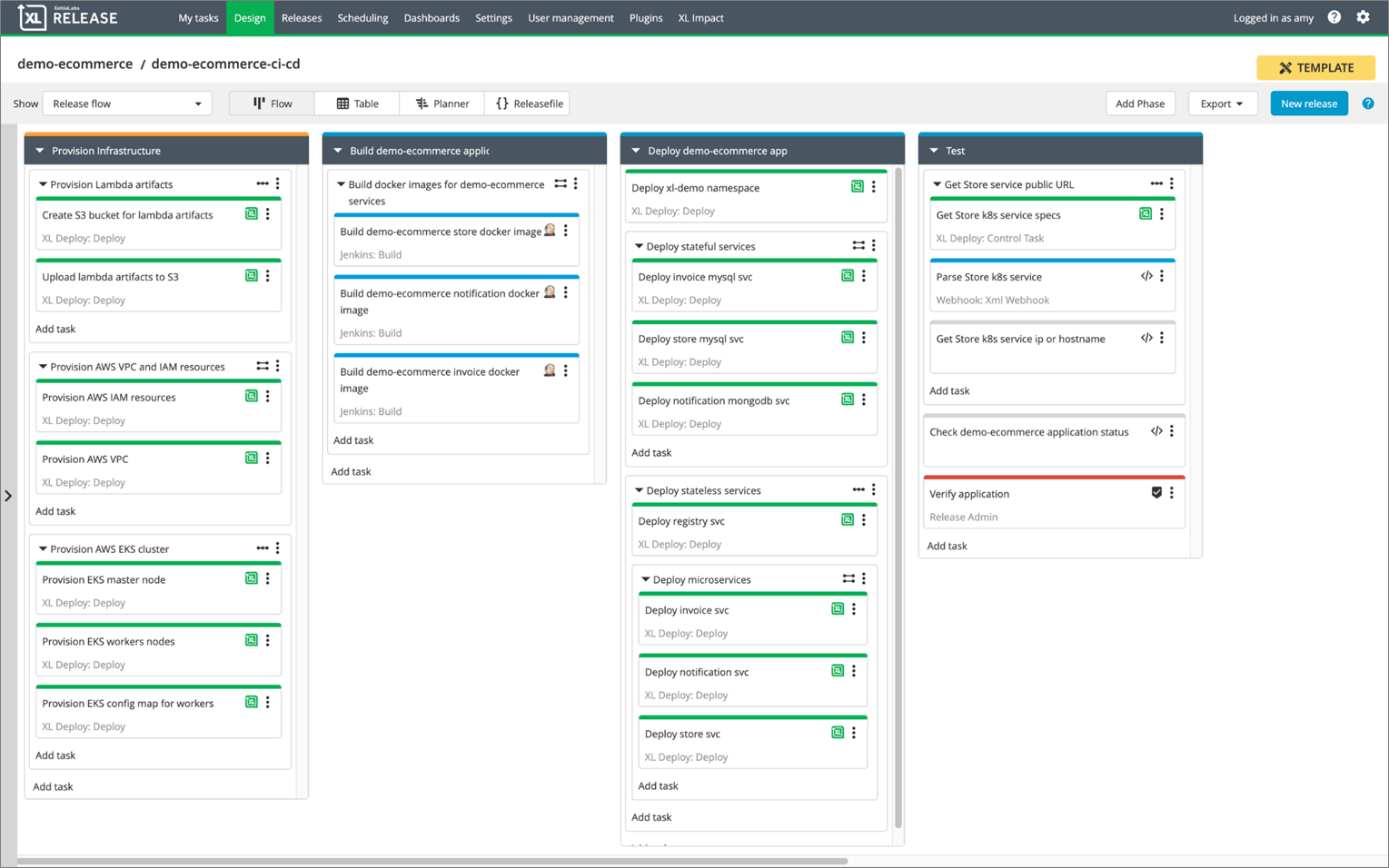 To get started, choose New Release, give the release a name, and choose Create. 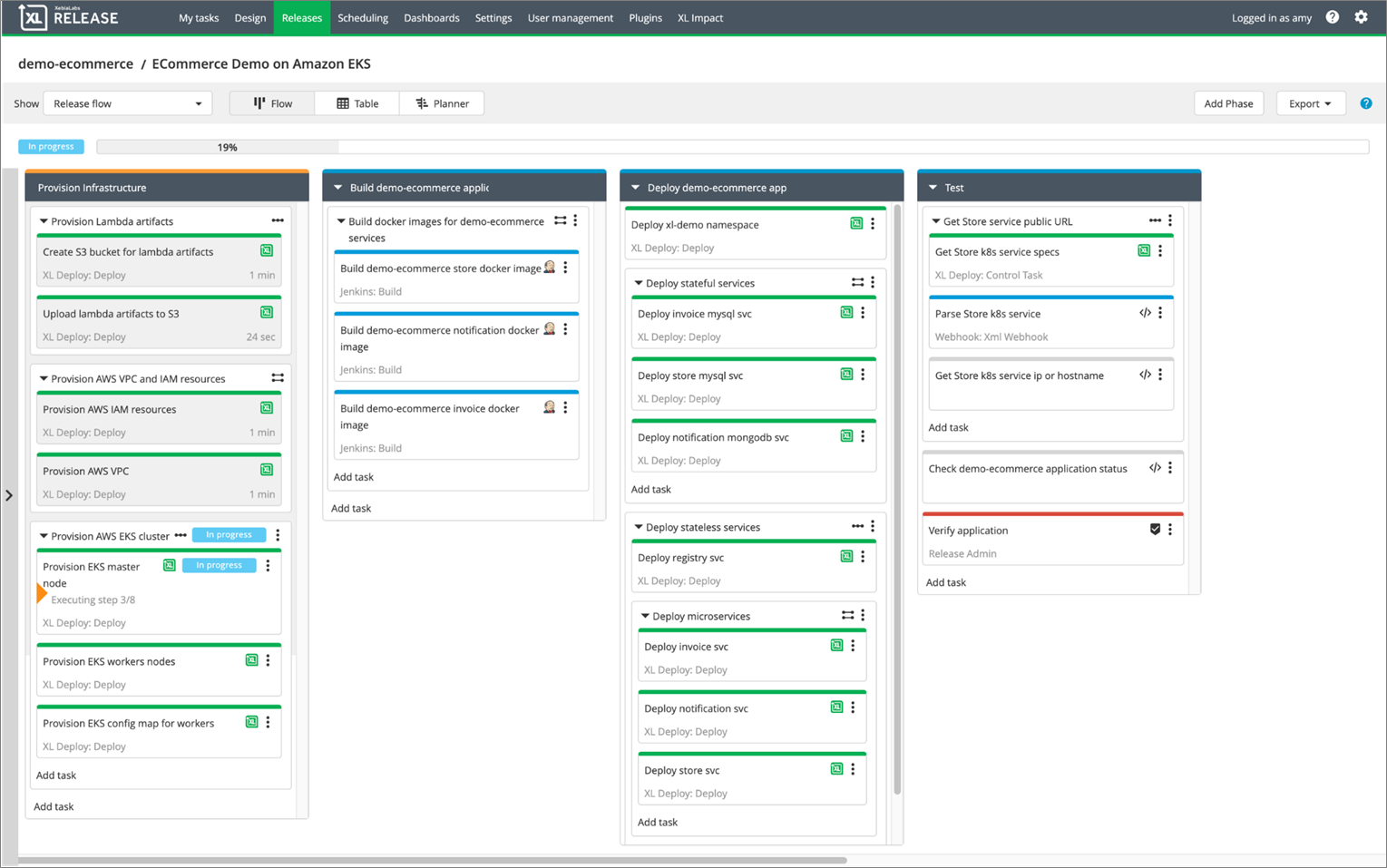 Figure 4 – Release template in the XebiaLabs DevOps Platform XL Release GUI showing the automatic execution of the release tasks that provision the Amazon EKS infrastructure, build the microservice artifacts, and deploy them to the infrastructure.

XebiaLabs starts by creating an Amazon S3 bucket to store the Lambda functions that are required for the application. It then provisions the VPC and creates AWS Identity and Access Management (IAM) resources, which are necessary for the Amazon EKS worker nodes and for running the Lambda functions.

Next, XebiaLabs provisions the Amazon EKS control plane instance and worker instances and deploys the ConfigMap that connects the workers to the master. XebiaLabs then uses Jenkins to build the sample microservice artifacts.

To deploy the microservices, XebiaLabs creates a Kubernetes namespace called xl-demo, and then deploys stateful and stateless services onto the namespace. Finally, after the deployment is complete, XebiaLabs gets the URL of the deployed application and provides it in the final Verify Application task so you can easily navigate to the running application.

XebiaLabs makes it easy to monitor infrastructure provisioning and application deployment activities in real-time, no matter which platform you’re targeting.

XebiaLabs offers real-time logging, making troubleshooting cloud deployments a breeze. All that information is captured and provided in reports for later review.

To clean up, open the Destroy template, create a release from that template, and run it. XebiaLabs undeploys the microservices, de-provisions the Amazon EKS cluster, and removes the Lambda functions, VPC, and IAM resources.

Adapt the Code for Your Apps

Now that you’ve seen how a typical deployment to Amazon EKS works, you can adapt the YAML files for your own applications. All you have to do is edit the files and re-run the xl apply command.

The XL CLI updates the deployment and release components accordingly and creates new items if necessary.

At XebiaLabs, we want to make it easy for companies to move applications to the cloud and adopt container technologies like Kubernetes. The XebiaLabs DevOps Platform:

XebiaLabs is an AWS Competency Partner. They create a unified, holistic view across all software delivery pipelines while automating and executing crucial governance, compliance, and security processes.