LoRaWAN is one of the most popular LPWAN technologies, with a growing deployment footprint.

AWS IoT Core is a managed IoT platform that allows connected devices to interact with cloud applications and Amazon Web Services (AWS) easily and securely—with the ability to support billions of devices and trillions of messages.

In this post, you will learn how to integrate devices connected to your private LoRaWAN network powered by OrbiWAN with AWS IoT Core. OrbiWAN is OrbiWise’s carrier-grade LoRaWAN Network Server (LNS) and is broadly used by large public network operators and by many private networks alike.

OrbiWise is an AWS Partner whose mission is to design advanced technologies for LoRaWAN providers to maximize the performance of their service and product offerings.

By using AWS IoT rules actions, you should be able to synchronize the AWS IoT Core and OrbiWAN device registries, integrate payloads from your LoRaWAN devices with AWS services like Amazon Timestream, and add reporting dashboards to your applications in no time.

OrbiWAN complies with the LoRaWAN protocol and supports a wide variety of commercial LoRaWAN gateways, offering reliability and scalability to end customers.

The OrbiWAN-Professional and OrbiWAN-Enterprise editions are available in software-as-a-service (SaaS) mode through AWS Marketplace.

The OrbiWAN-Professional edition is suited for Industrial IoT (IIoT) networks requiring a professional LNS, emphasizing ease of use and allowing for quick deployment of end-to-end solutions. It includes an intuitive user interface (UI) suitable to small and medium-sized IoT deployments. It also includes advanced features, such as the possibility to perform remote firmware updates over-the-air (FUOTA). 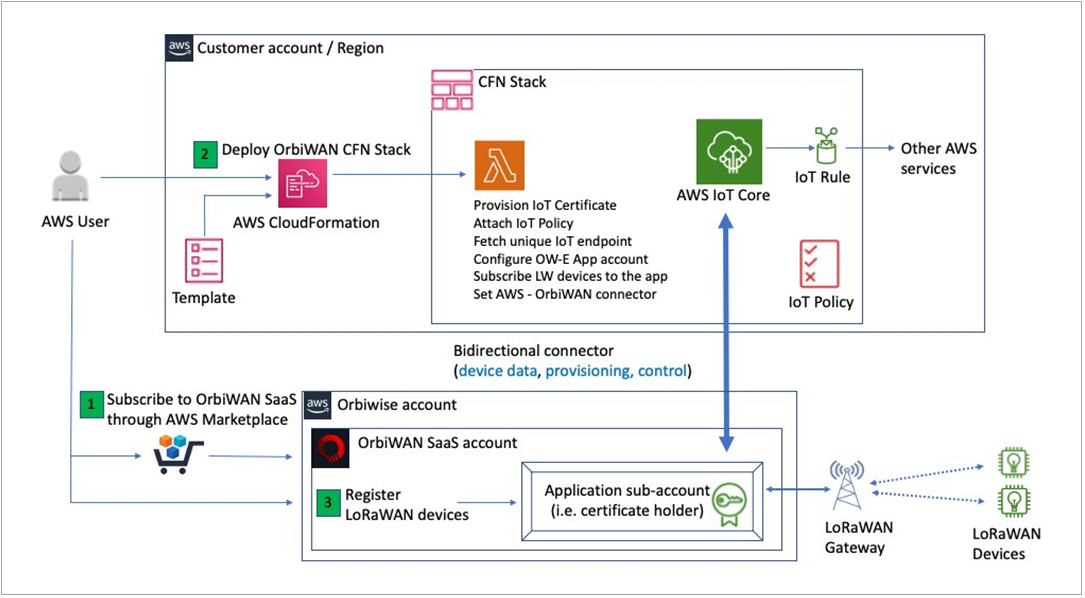 After subscribing to OrbiWAN-Professional, you will receive a welcome email with step-by-step instructions for completing your account setup and accessing the OrbiWAN management console. You can deploy the AWS IoT integration in your chosen AWS Region.

The OrbiWAN bi-directional connector publishes event-based messages to the pre-determined topics when specific device events occur and allows applications to send commands back to the devices—for example, to update properties or invoke actions.

The available topics for uplink are the following:

Downlink messages must be sent to the following topic: orbiwan/lorawan/{deveui}/downlink

The join request is initiated by the device for activation. The integration allows join requests visible to customers in AWS IoT Core. In this section, we will use AWS IoT Core MQTT test client to monitor the messages passed in your AWS account:

Early uplink notifications are sent as soon as a new uplink frame has been received by the LNS to allow the application enough time to send an almost immediate response when needed.

On the other hand, packets sent by LoRaWAN devices are potentially received by multiple gateways. Instead of sending all copies of the same uplink message to the applications, the data is aggregated by the LNS into a single uplink notification which may contain the full list of gateways that received the message.

Your application can subscribe to one or the other type of uplink notifications: 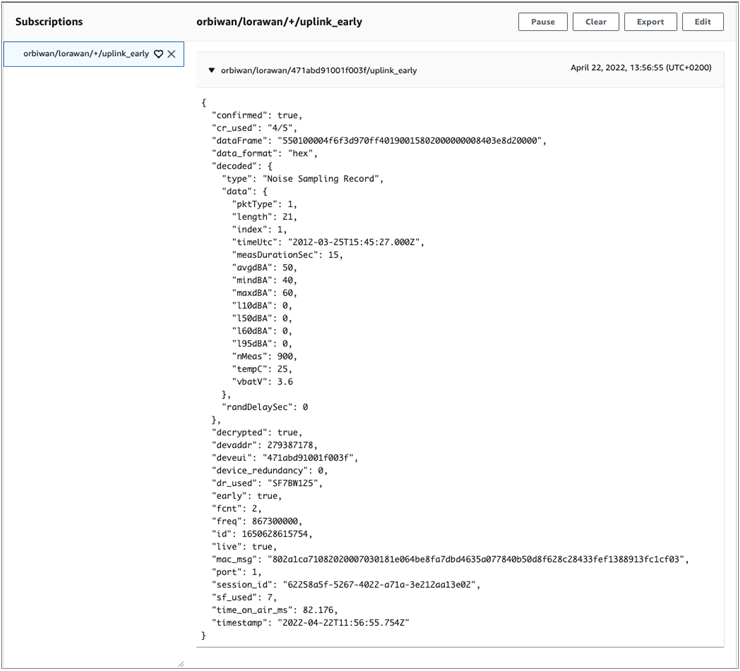 Applications built on AWS IoT can send downlink payloads to LoRaWAN devices by publishing on the topic orbiwan/lorawan/{deveui}/downlink.

The Lambda function republishes the messages by making POST requests to the OrbiWAN server to transmit the message to the devices on next opportunity. DevEUI of the target device is part of MQTT topic.

The message is a JSON object with the following format:

The diagram in Figure 4 below illustrates the overall approach:

You can use AWS IoT Core MQTT test client to publish downlink messages to OrbiWAN: 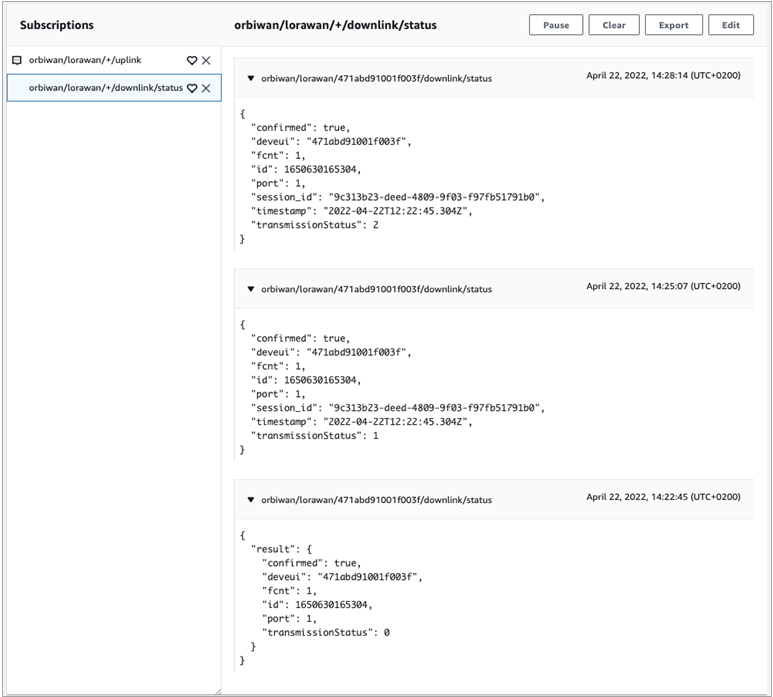 Note that this notification will be sent several times as the state changes. The meaning of the transmission status is the following:

If an error happened on the downlink, it is indicated on orbiwan/lorawan/+/downlink/status.

Downlink payloads are listed in the OrbiWAN console, indicating they are successfully scheduled.

Downlink messages are by default transmitted as confirmed messages, but setting “confirmed” to “false” will force transmission of the downlink as unconfirmed. The payload in the request message body is in hexadecimal format by default, but base64 can be used by setting “data_format” to “base64”.

The AWS IoT Core integration for OrbiWAN synchronizes LoRaWAN devices between AWS IoT Core Registry and OrbiWAN in real-time. It supports having either side as master device registry.

Devices DevEUI created in OrbiWAN are automatically created as AWS IoT Core as a “Thing” as soon as you assign devices to the AWS IoT application account. 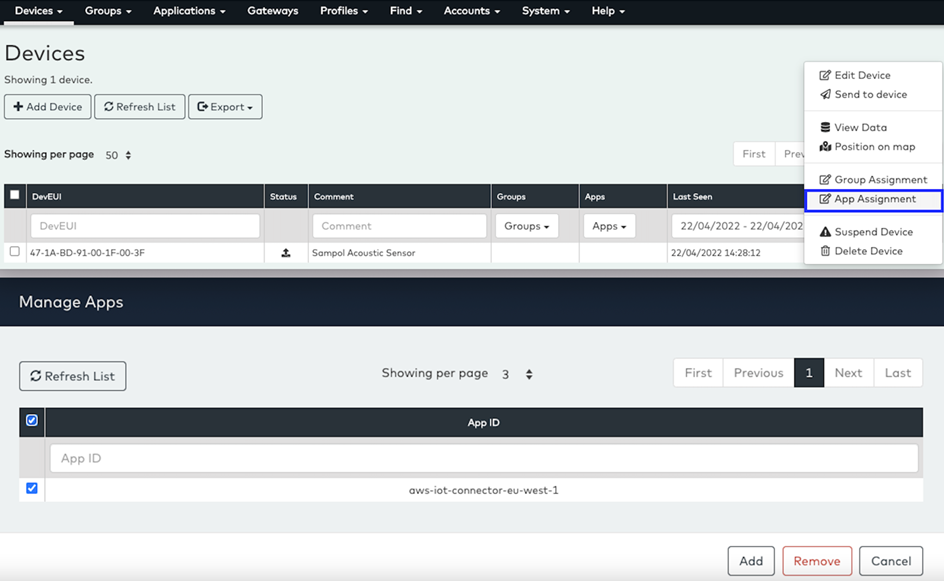 Similarly, the integration relies on event messages from AWS IoT Core registry to act upon “Thing” creation or removal. Changes (such as new things) are automatically replicated on OrbiWAN without user interaction required.

To create devices from AWS IoT Core, you need to: 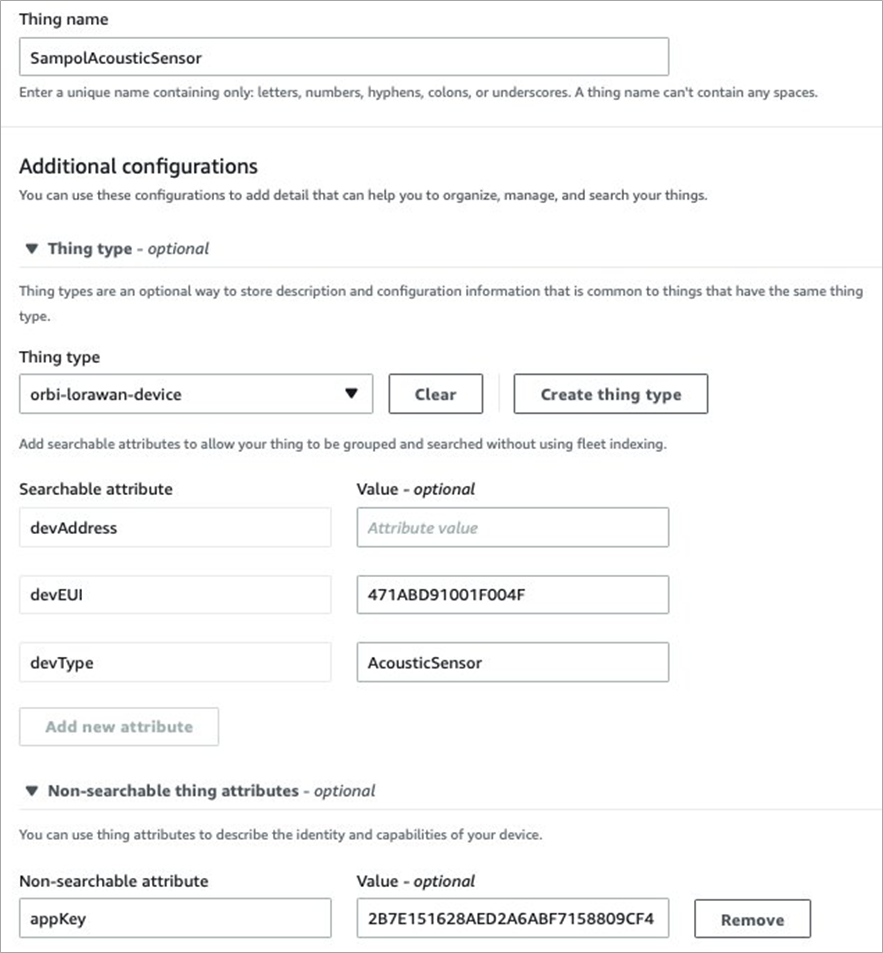 A Lambda function created as part of AWS CloudFormation will immediately replicate the device in OrbiWAN.

Since the data transmitted by your devices is now received in AWS IoT Core via the connector, you can build IoT applications that store, process, analyze, and act on data generated by connected devices, without having to manage any infrastructure.

This section guides you through the steps to build a real-time dashboard solution to visualize the telemetry data and link quality indicators from your LoRaWAN devices. 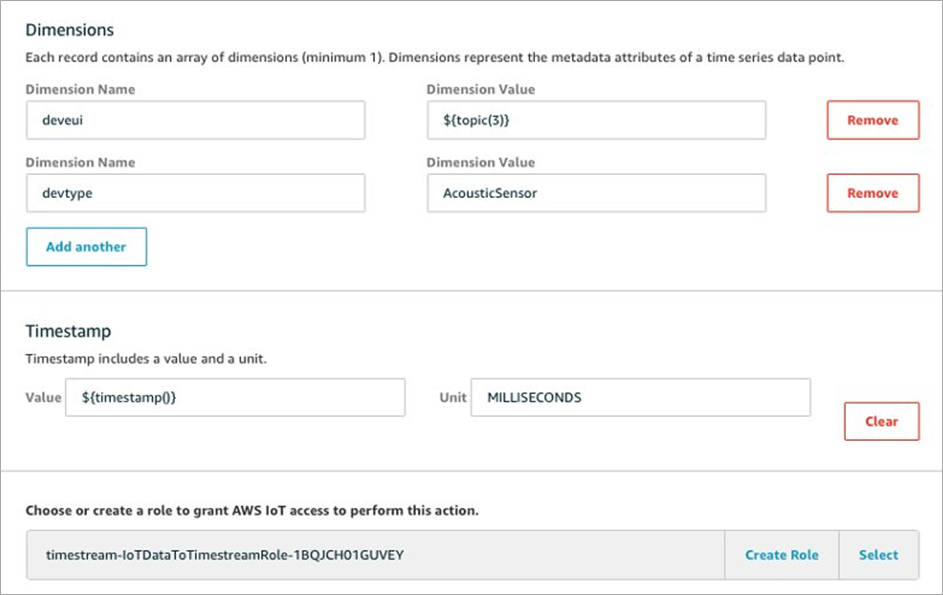 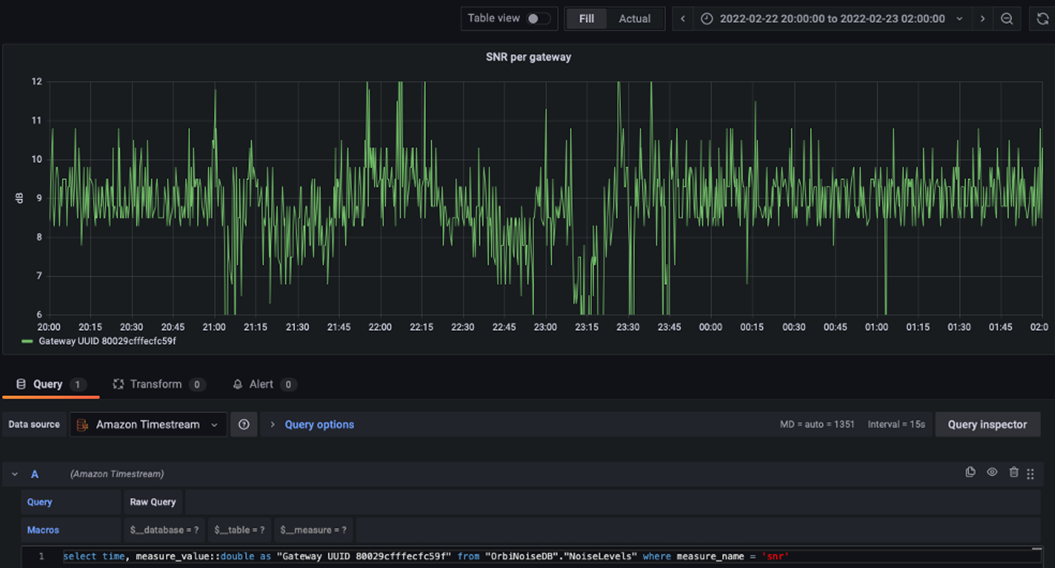 Similarly, you can create a new panel to visualize the RSSI reported by the device’s best gateway. 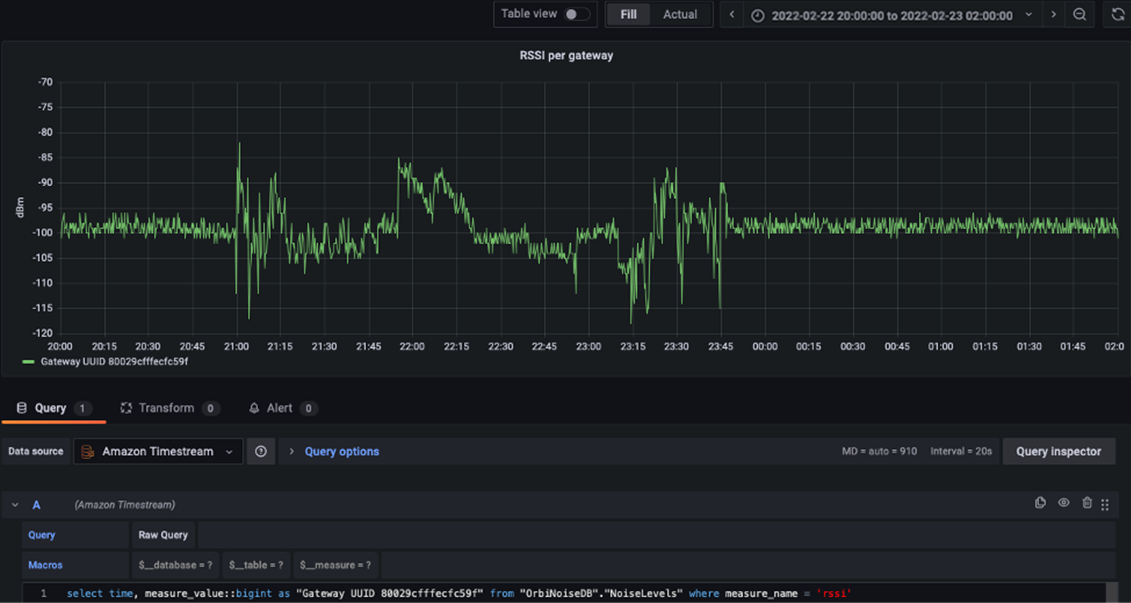 Grafana allows you to easily move or re-arrange the panels in the dashboard. 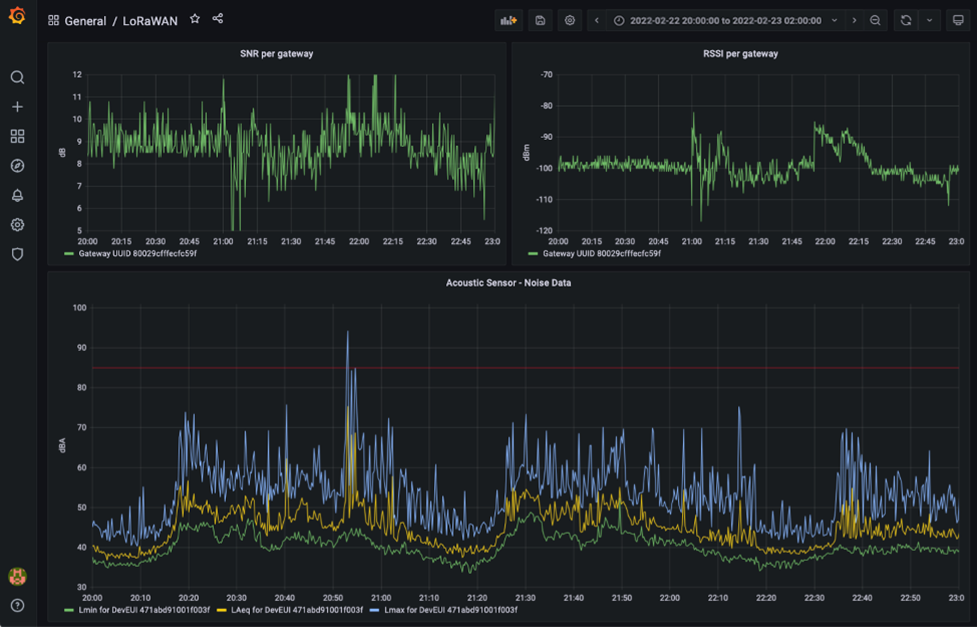 To simplify setup, OrbiWise can provide an AWS CloudFormation template that will automatically create a Timestream database, a Timestream table, an IoT rule, and set up a new Grafana instance.

In this post, we covered how easy it is to use AWS CloudFormation to integrate OrbiWAN LoRaWAN network server with AWS IoT Core, send/receive device payload and synchronize device status, and use other cloud services available on AWS.

OrbiWAN will continue to build additional features for AWS IoT integration and enable customers to build their solutions using other AWS services.