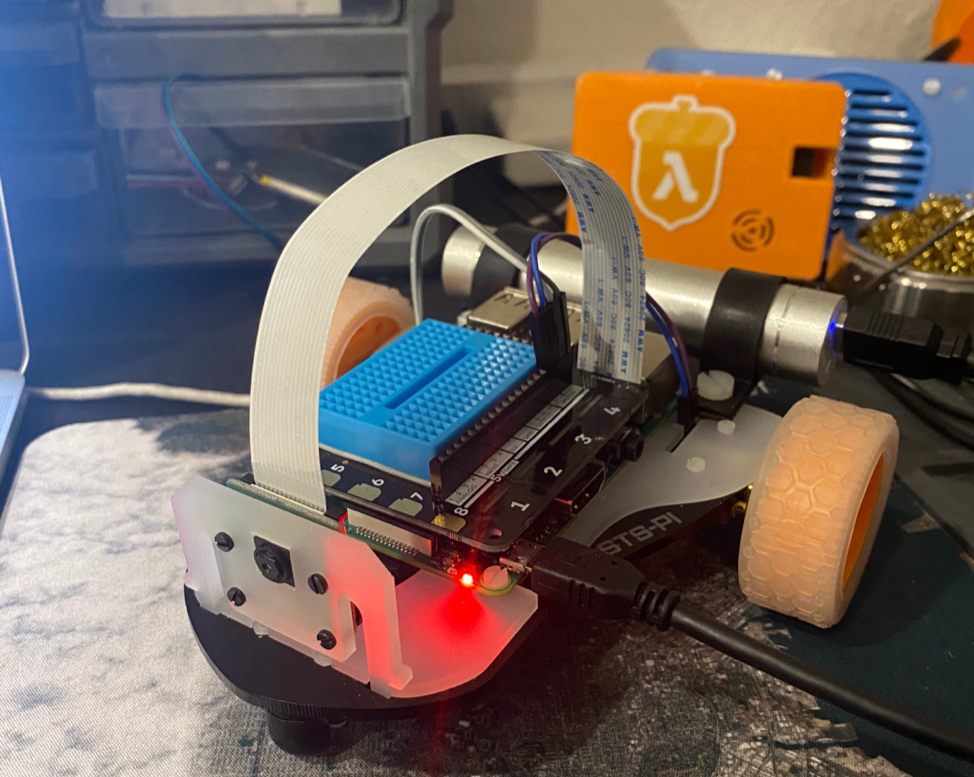 A Pimoroni STS-Pi Robot Kit connected to AWS for remote control and viewing.

A telepresence robot allows you to explore remote environments from the comfort of your home through live stream video and remote control. These types of robots can improve the lives of the disabled, elderly, or those that simply cannot be with their coworkers or loved ones in person. Some are used to explore off-world terrain and others for search and rescue.

This guide walks through building a simple telepresence robot using a Pimoroni STS-PI Raspberry Pi robot kit. A Raspberry Pi is a small low-cost device that runs Linux. Add-on modules for Raspberry Pi are called “hats”. You can substitute this kit with any mobile platform that uses two motors wired to an Adafruit Motor Hat or a Pimoroni Explorer Hat.

The sample serverless application uses AWS Lambda and Amazon API Gateway to create a REST API for driving the robot. A Python application running on the robot uses AWS IoT Core to receive drive commands and authenticate with Amazon Kinesis Video Streams with WebRTC using an IoT Credentials Provider. In the next blog I walk through deploying a web frontend to both view the livestream and control the robot via the API.

You need the following to complete the project: 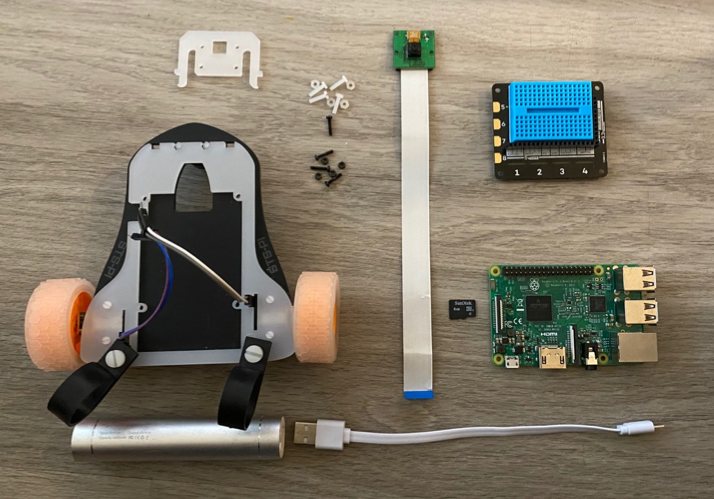 There are three major parts to this project. First deploy the serverless backend using the AWS Serverless Application Repository. Then assemble the robot and run an installer on the Raspberry Pi. Finally, configure and run the Python application on the robot to confirm it can be driven through the API and is streaming video.

The Python application that runs on the robot requires permissions to connect as an IoT Thing and subscribe to messages sent to a specific topic on the AWS IoT Core message broker. The following policy is created in the SAM template:

To transmit video, the Python application runs the amazon-kinesis-video-streams-webrtc-sdk-c sample in a subprocess. Instead of using separate credentials to authenticate with Kinesis Video Streams, a Role Alias policy is created so that IoT credentials can be used.

When the above policy is attached to a certificate associated with an IoT Thing, it can assume the following role:

This role grants access to connect and transmit video over WebRTC using the Kinesis Video Streams signaling channel deployed by the serverless application.

A deployed API Gateway endpoint, when called with valid JSON, invokes a Lambda function that publishes to an IoT message topic, RobotName/action. The Python application on the robot subscribes to this topic and drives the motors based on any received message that maps to a command.

Flash an operating system to an SD card

The Raspberry Pi single-board Linux computer uses an SD card as the main file system storage. Raspbian Buster Lite is an officially supported Debian Linux operating system that must be flashed to an SD card. Balena.io has created an application called balenaEtcher for the sole purpose of accomplishing this safely.

Typically, a keyboard and monitor are used to configure Wi-Fi or to access the command line on a Raspberry Pi. Since it is on a mobile platform, configure the Raspberry Pi to connect to a Wi-Fi network and enable remote access headless by adding configuration files to the SD card.

For this section, you can use the Pimoroni STS-Pi robot kit with a Pimoroni Explorer Hat, along with a Raspberry Pi Model 3 B+ or newer, and a camera module. Alternatively, you can use any two motor robot platform that uses the Explorer Hat or Adafruit Motor Hat.

Use your computer to gain remote command line access of the Raspberry Pi using SSH. Both devices must be on the same network.

A built-in utility, raspi-config, provides an easy to use interface for configuring Raspbian. You must enable the camera module, along with I2C, a serial bus used for communicating with the motor driver.

An installer script is provided for building and installing the Kinesis Video Stream WebRTC producer, AWSIoTPythonSDK and Pimoroni Explorer Hat Python libraries. Upon completion, it creates a directory with the following structure:

The Python application on the robot subscribes to AWS IoT Core to receive messages. It requires the certificate and private key created for the IoT thing to authenticate. These files must be copied to the directory where the Python application is stored on the Raspberry Pi.

It also requires the IoT Credentials endpoint is added to the file config.json to assume permissions necessary to transmit video to Amazon Kinesis Video Streams.

The following steps create a WebRTC connection with the robot to view the live stream.

The serverless backend includes an Amazon API Gateway REST endpoint that publishes JSON messages to the Python script on the robot.

The robot expects a message:

In this post, I show how to build and program a telepresence robot with remote control and a live video feed in the cloud. I did this by installing a Python application on a Raspberry Pi robot and deploying a serverless application.

The Python application uses AWS IoT credentials to receive remote commands from the cloud and transmit live video using Kinesis Video Streams with WebRTC. The serverless application deploys a REST endpoint using API Gateway and a Lambda function. Any application that can connect to the endpoint can drive the robot.

In part two, I build on this project by deploying a web interface for the robot using AWS Amplify. 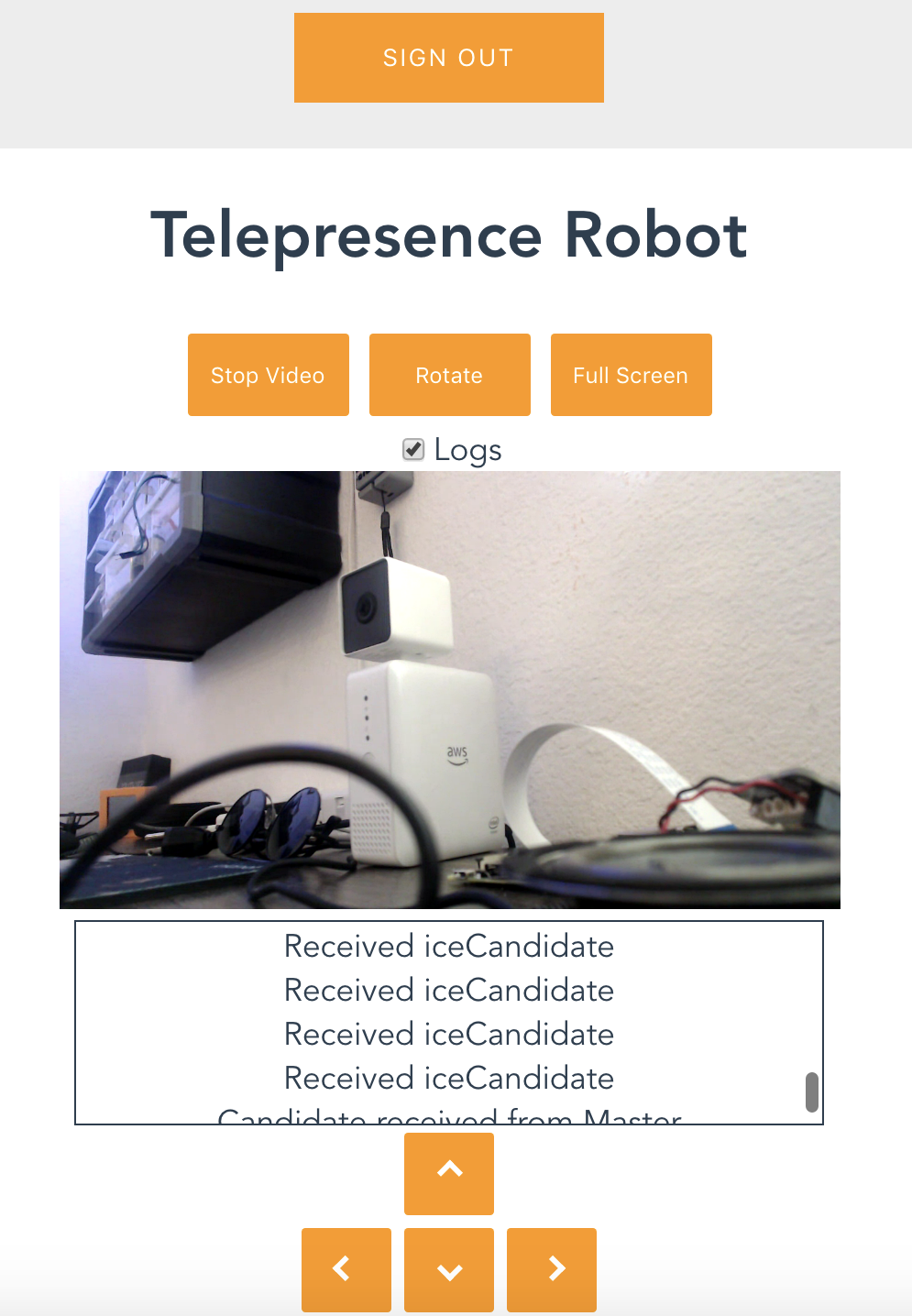 A preview of the web frontend built in the next blog.