This post is contributed by Yahav Biran, Chad Schmutzer, and Jeremy Cowan, Solutions Architects at AWS

Many successful video games such Fortnite: Battle Royale, Warframe, and Apex Legends use a free-to-play model, which offers players access to a portion of the game without paying. Such games are no longer low quality and require premium-like quality. The business model is constrained on cost, and Amazon EC2 Spot Instances offer a viable low-cost compute option. The casual multiplayer games naturally fit the Spot offering. With the orchestration of Amazon EKS containers and the mechanism available to minimize the player impact and optimize the cost when running multiplayer game-servers workloads, both casual and hardcore multiplayer games fit the Spot Instance offering.

Simply put, multiplayer game servers spend most of their life updating current character position and state (mostly animation). The rest of the time is spent on image updates that result from combat actions, moves, and other game-related events. More specifically, game servers’ CPUs are busy doing network I/O operations by accepting client positions, calculating the new game state, and multi-casting the game state back to the clients. That makes a game server workload a good fit for general-purpose instance types for casual multiplayer games and, preferably, compute-optimized instance types for the hardcore multiplayer games.

In other cases, you can use game-server deployment patterns like containers-based orchestration (such as Kubernetes, Swarm, and Amazon ECS) for deploying multiplayer game servers. Those systems manage a large number of game-servers deployed as Docker containers across several Regions. The rest of this blog focuses on this containerized game-server solution. Containers fit the game-server workload because they’re lightweight, start quickly, and allow for greater utilization of the underlying instance.

Why use Amazon EC2 Spot Instances?

A Spot Instance is the choice to run a disposable game server workload because of its built-in two-minute interruption notice that provides graceful handling. The two-minute termination notification enables the game server to act upon interruption. We demonstrate two examples for notification handling through Instance Metadata and Amazon CloudWatch. For more information, see “Interruption handling” and “What if I want my game-server to be redundant?” segments later in this blog.

Avoiding player impact is key when using Spot Instances. Here is a strategy to avoid player impact that we apply in the proposed reference architecture and code examples available at Spotable Game Server on GitHub. Specifically, for Amazon EKS, node drainage requires draining the node via the kubectl drain command. This makes the node unschedulable and evicts the pods currently running on the node with a graceful termination period (terminationGracePeriodSeconds) that might impact the player experience. As a result, pods continue to run while a signal is sent to the game to end it gracefully.

Node drainage requires an agent pod that runs as a DaemonSet on every Spot Instance host to pull potential spot interruption from Amazon CloudWatch or instance metadata. We’re going to use the Instance Metadata notification. The following describes how termination events are handled with node drainage:

The following architecture describes an instance mix of On-Demand and Spot Instances in an Amazon EKS cluster of multiplayer game servers. Within a single VPC, control plane node pools (Master Host and Storage Host) are highly available and thus run On-Demand Instances. The game-server hosts/nodes uses a mix of Spot and On-Demand Instances. The control plane, the API server is accessible via an Amazon Elastic Load Balancing Application Load Balancer with a preconfigured allowed list. 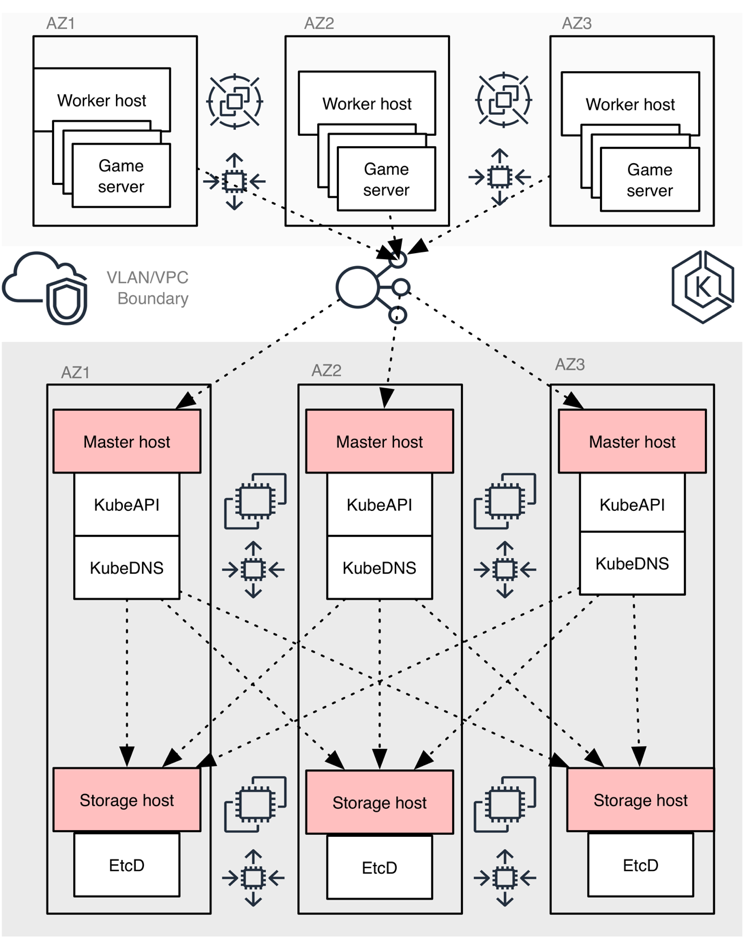 What if I want my game server to be redundant?

This section proposes a solution for the case where game servers deployed as containerized Amazon EKS pods use UDP as the network transport layer and are required to be highly available. We’re using the UDP load balancer because of the Spot Instances, but the choice isn’t limited to when you’re using Spot Instances.

The following diagram shows a reference architecture for the implementation of a UDP load balancer based on Amazon EKS. It requires a setup of an Amazon EKS cluster as suggested above and a set of components that simulate architecture that supports multiplayer game services. For example, this includes game-server inventory that captures the running game-servers, their status, and allocation placement. 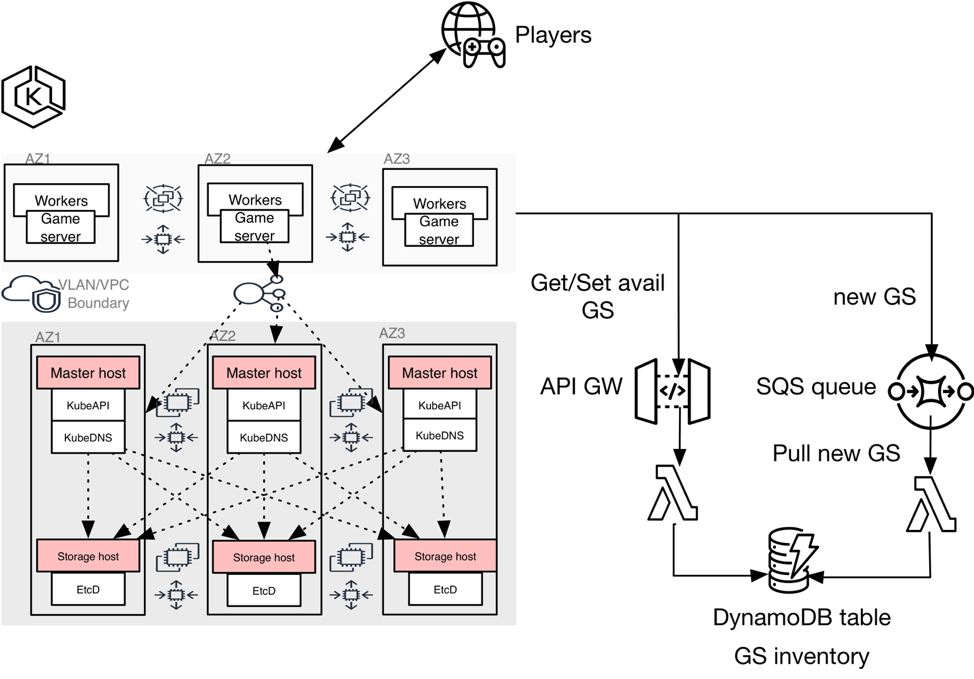 The Amazon EKS cluster is on the left, and the proposed UDP load-balancer system is on the right. A new game server is reported to an Amazon SQS queue that persists in an Amazon DynamoDB table. When a player’s assignment is required, the match-making service queries an API endpoint for an optimal available game server through the game-server inventory that uses the DynamoDB tables.

Our goal in this example is to reduce the chance that two game servers that serve the same load-balancer game endpoint are interrupted at the same time. Therefore, we need to prevent the scheduling of the same game servers (mockup-UDP-server) on the same host. This example uses advanced scheduling in Kubernetes where the pod affinity/anti-affinity policy is being applied.

The requiredDuringSchedulingIgnoredDuringExecution tells the scheduler that the subsequent rule must be met upon pod scheduling. The rule says that pods that carry the value of key: “app” mockup-grp1 will not be scheduled on the same node as pods with key: “app” mockup-grp2 due to topologyKey: “kubernetes.io/hostname”.

When a load balancer pod (udp-lb) is scheduled, it queries the game-server-inventory-api endpoint for two game-server pods that run on different nodes. If this request isn’t fulfilled, the load balancer pod enters a crash loop until two available game servers are ready.

We published two examples that guide you on how to build an Amazon EKS cluster that uses Spot Instances. The first example, Spotable Game Server, creates the cluster, deploys Spot Instances, Dockerizes the game server, and deploys it. The second example, Game Server Glutamate, enhances the game-server workload and enables redundancy as a mechanism for handling Spot Instance interruptions.