Event-driven computing is a common pattern in modern application development with microservices, which is a great fit for building resilient and scalable software in AWS. Event-driven computing needs to be push-based with event-driven applications that are run on-demand when an event triggers the functional workflow. Tools that help you minimize resource usage and reduce costs are essential. Instead of running systems continuously while you wait for an event to occur, event-driven applications are more efficient because they start when the event occurs and terminate when processing completes. Additionally, event-driven architectures with Smart Endpoints and Dump Pipes patterns further decouple services, which makes it easier to develop, scale, and maintain complex systems.

AWS Step Functions integration with Amazon EKS creates a workflow that creates and deletes resources in your Amazon EKS cluster. You also benefit from built in error-handling that handles task failures or transient issues.

We use AWS Step Functions to orchestrate an AWS Lambda function and a Map state ("Type": "Map") that runs a set of steps for each element of an input array. A Map state executes the same steps for multiple entries of an array with the state input. 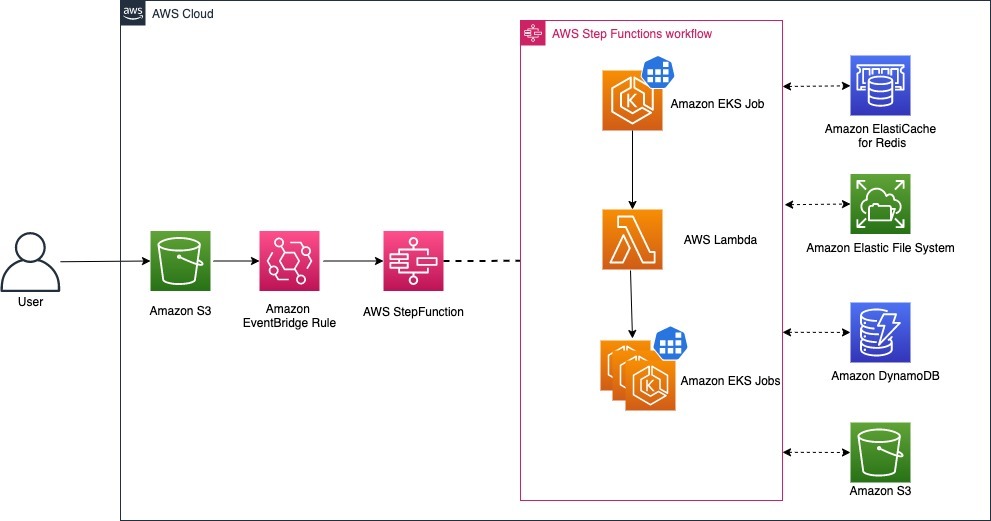 For this demonstration, we use AWS Cloud Development Kit (AWS CDK) and first deploy a set of AWS CDK stacks to create and deploy necessary infrastructure, as shown in the previous diagram. AWS Step Functions invoke when an input file appears in the configured Amazon Simple Storage Service (Amazon S3) bucket.

You need the following to complete the steps in this post:

Execute the following commands to bootstrap the AWS environment:

The AWS CDK code create one stack with the name file-batch-stack, which creates the following AWS Resources:

Run the following command to start the deployment:

To verify that the deployed solution is working, you can upload sample file test.csv under the payload folder to the input bucket. Run the following command from the root directory:

The following image shows a line from the input file:

When a new file is uploaded to the Amazon S3 bucket, the AWS Step Function state machine is triggered using an Amazon EventBridge Rule. Navigate to the AWS Managed Console and select the state machine created by the AWS CDK (the CDK output includes the name).

The AWS Step Function execution looks like the execution details, as described in the Solution overview section, and shown in the following diagram: 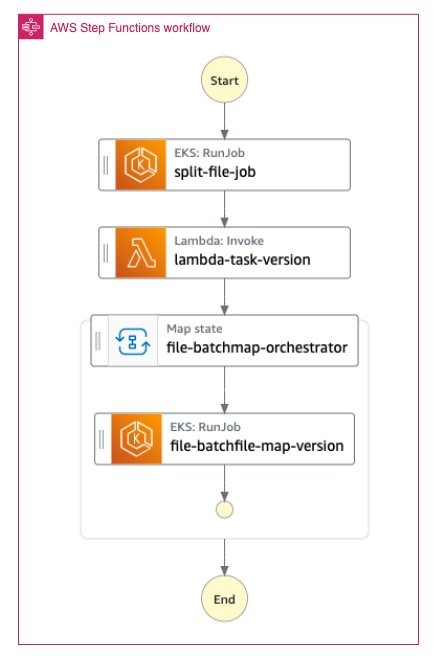 Once the workflow completes successfully, you can download the response file from the Amazon S3 bucket.

Are you sure you want to delete: file-batch-stack (y/n)?

This post showed how to run event-driven workflows at scale using AWS Step Functions on Amazon EKS and AWS Lambda. We provided you with AWS CDK code to create the cloud infrastructure, Kubernetes resources, and the application within the same codebase. Whenever you upload a file to the Amazon S3 bucket, the event triggers a Kubernetes job.

You can follow the details in this post to build your own serverless event-driven workflows that run jobs in Amazon EKS clusters.