Technologies involved
AWS Key Management Service (AWS KMS) is a managed service that makes it easy for you to create and control the encryption keys used to encrypt your data. It uses hardware security modules (HSMs) to protect the security of your keys. AWS KMS is integrated with several other AWS services to help you protect the data that you store with these services. AWS KMS is also integrated with AWS CloudTrail to provide you with logs of all key usage to help meet your regulatory and compliance needs.

Amazon Simple Storage Service (Amazon S3) is object storage built to store and retrieve any amount of data from anywhere—websites and mobile apps, corporate applications, and data from IoT sensors or devices. It’s designed to deliver 99.999999999 percent durability, and has many customers that each store billions of objects and exabytes of data. You can use it for media storage and distribution, as a data lake for big data analytics, as a backup target, and as the storage tier for serverless computing applications.

Amazon RDS for SQL Server makes it easy to set up, operate, and scale Microsoft SQL Server deployments in the cloud. With Amazon RDS, you can deploy multiple editions of SQL Server (2008 R2, 2012, 2014, and 2016) including Express, Web, Standard, and Enterprise, in minutes with cost-efficient and resizable compute capacity. Amazon RDS frees you up to focus on application development by managing time-consuming database administration tasks including provisioning, backups, software patching, monitoring, and hardware scaling.

Overall process
The following sections go into each step in greater detail, but overall the process for securely restoring an encrypted Microsoft SQL Server backup file to RDS is as so:

Envelope encryption provides customers with the benefits of layered security combined with symmetric encryption. It reduces the effort required to rotate encryption keys, and it provides unique data encryption keys for every encrypted customer object. 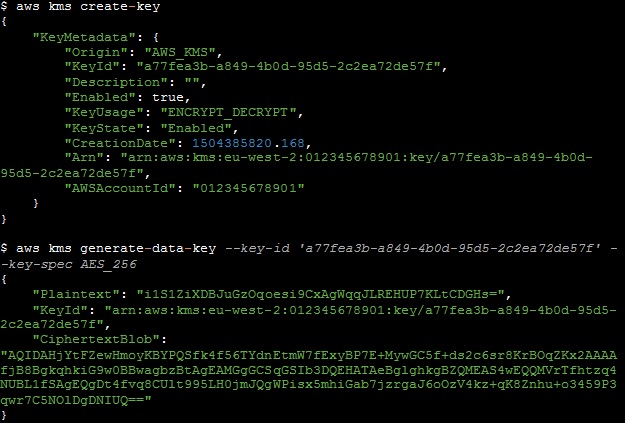 Note: The CMK and data key must be generated in the same AWS Region as the RDS instance so that the instance can decrypt and import the backup.

In general, client-side encryption works in concert with KMS and S3. An on-premises software package retrieves a data encryption key from KMS and creates a ciphertext using the data key. It then uploads the ciphertext and encrypted data key to S3 to be consumed by other services. When decrypting the data stored in S3, services and other users require permissions to access the S3 object and the KMS CMK that protects the encrypted data key.

Specifically, in terms of RDS, customers must use AES-256 with cipher block chaining (CBC) and PKCS5 padding to perform the client-side encryption. After encryption, the resulting encrypted object should be uploaded to S3 with the following metadata attached to the object:

For example, using the Python script following to encrypt a BAK file produces the following output.

You store as metadata the initialization vector (IV), the encrypted data key retrieved earlier from KMS, and the identifier for the KMS CMK used to create the data key. You store these with the encrypted RDS backup in S3.

When the backup is encrypted and stored in S3, you can import it into RDS. The following table shows example S3-CSE metadata.

This post uses a custom Python script to encrypt the Microsoft SQL Server backup. RDS performs and uses standard AES-256 encryption using CBC mode in concert with KMS. This approach means that you can use almost any tool to perform the encryption on-premises.

The example following uses Python to control the encryption process. However, you can use any encryption software that supports AES-256 CBC and that can take an encryption key, returning the initialization vector. 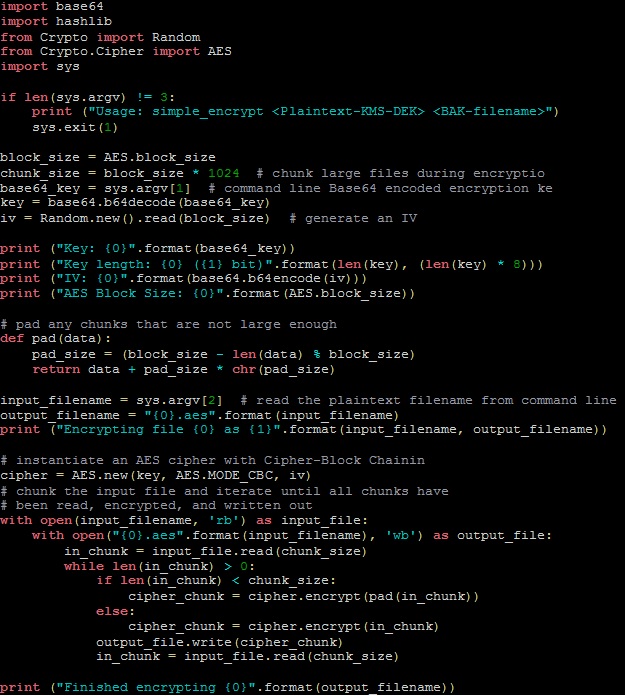 The post outlines use of the stored procedure msdb.dbo.rds_restore_database to decrypt the S3 object and restore the database into RDS. The steps are summarized following:

The following shows an example.

By using the rds_task_status stored procedure, you can track the progress of the restoration. When the task is completed, the database is available for use. You can delete the S3 object if it’s no longer required.

By using this stored procedure, RDS creates an encrypted backup file in S3 using the specified KMS CMK in the same manner as you did client-side. You can then retrieve and decrypt the backup in a fashion similar to the upload and import performed earlier.

Begin by downloading the exported file from S3 and retrieving the metadata, which contains the encrypted DEK and IV needed to decrypt the backup.

With the encrypted backup on your local disk and the metadata retrieved from S3, you next decrypt the DEK by using KMS. Using the AWS CLI, you can request KMS to decrypt the DEK and return the plaintext value of the DEK. You can then use that value to decrypt the Microsoft SQL Server backup.

Last, you decrypt the backup using the sample Python script as in the following.

You can now import the resulting output into an on-premises SQL Server database system.

Following you can find a full Python example of AES-256 CBC decryption. 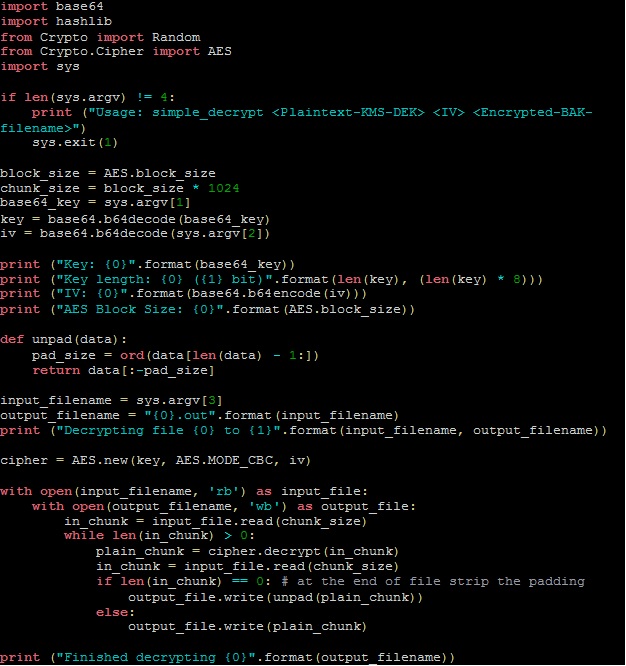 Jason Barto is a solutions architect at Amazon Web Services. He works with our customers to provide guidance and technical assistance on database projects, helping them improving the value of their solutions when using AWS.