As you migrate Oracle workloads to AWS, you may want to implement Oracle Enterprise Manager (OEM) Cloud Control in AWS. OEM is Oracle’s management platform, which provides a single pane of glass for managing Oracle environments.

This post explains why the AWS native OEM HA architecture is preferred in AWS. This solution is less complex, has a faster implementation time, and doesn’t rely on AWS third-party solutions to provide OEM high availability.

The outage of any OEM service impacts the monitoring of all OEM targets. These targets can include Oracle databases, Oracle middleware, and EC2 instances.

Customers can have more than 25 concurrent OEM user sessions, more than 100 OEM agents, or more than 1,000 OEM targets. For environments that meet any of these criteria, Oracle recommends a medium or large OEM configuration, which requires high availability.

Customers can easily exceed 1,000 OEM targets. As a result, you may undersize your OEM environment and experience performance problems. A single Oracle database, OEM environment, and Oracle E-Business Suite environment contains more targets than you might anticipate.

The following screenshot shows that a single Amazon RDS for Oracle instance has six OEM targets.

However, if you use the traditional OEM Level 3 HA AWS architecture, the Restricted Use License for OEM may not be compliant. Based on Oracle’s recommended sizing, you may need to purchase Oracle Enterprise Edition Database and Oracle RAC licenses. Additional Oracle database licenses may be required due to the implementation of an Oracle Data Guard environment. Oracle RAC licenses may be required because the OEM database repository is deployed on Oracle RAC.

You should send database backups directly to Amazon Simple Storage Service (Amazon S3) via the Oracle Secure Backup (OSB) Module for Amazon S3. OSB should be implemented with both OEM solutions, which may require an Oracle license.

You are responsible for making sure you have the proper Oracle licenses to run your workloads. 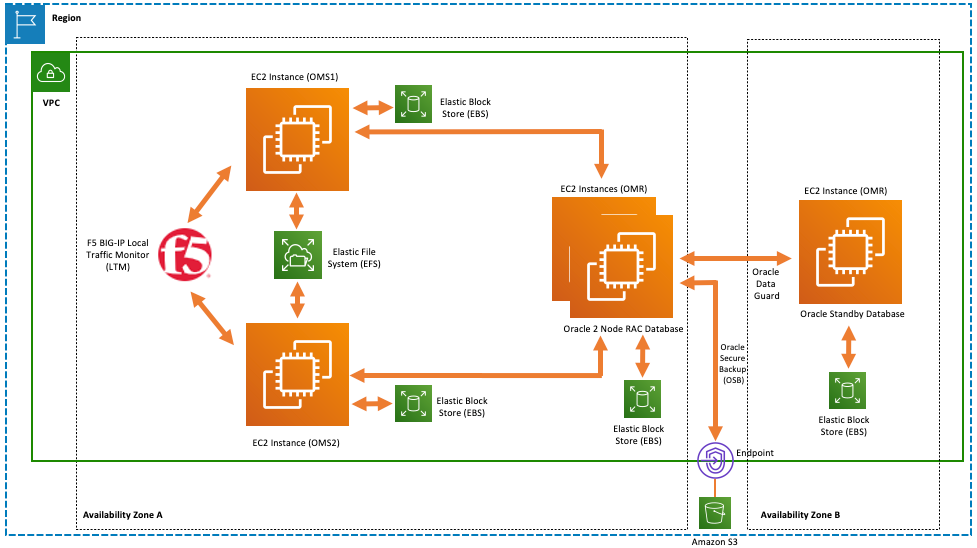 The traditional OEM Level 3 HA AWS architecture is a proven, viable option. It’s recommended if you have available Oracle Database Enterprise Edition and Oracle RAC licenses. However, a simpler, much more cost-efficient option is available. 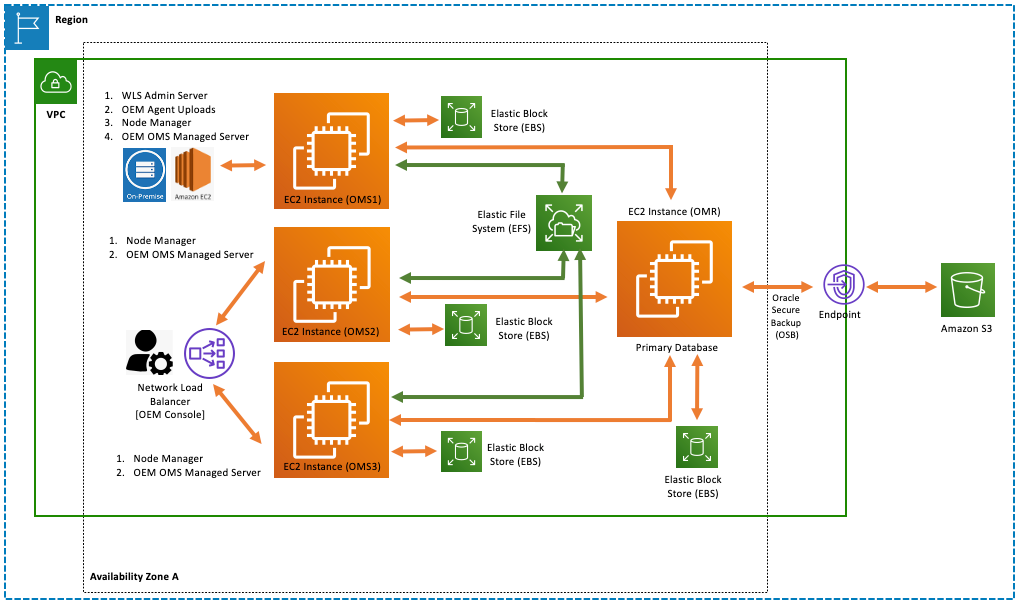 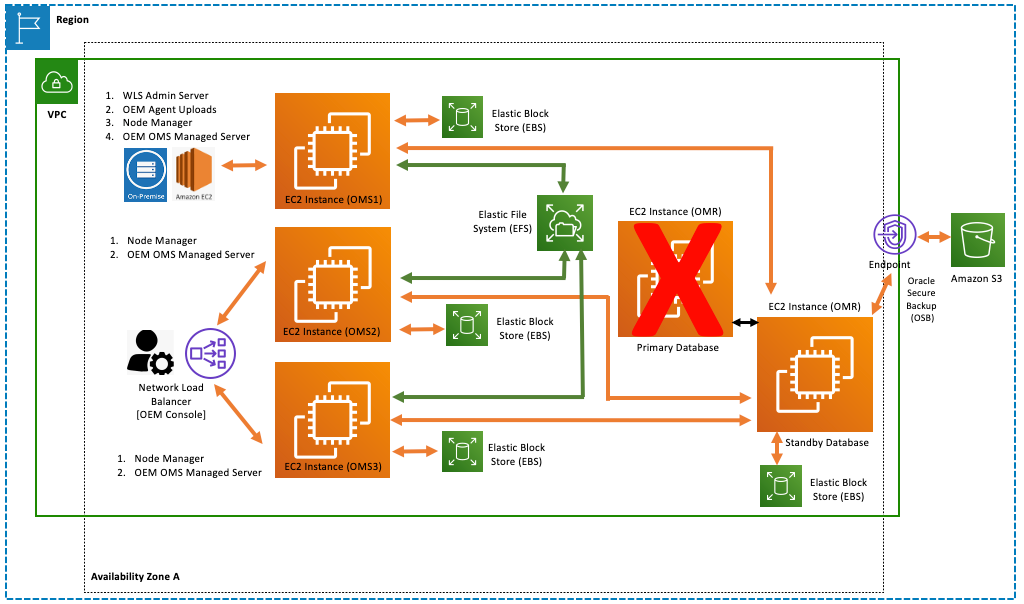 All the EC2 instances in this solution should enable Amazon EC2 instance termination. This prevents an instance from being accidentally terminated by requiring the user to disable the protection before terminating the instance.

Additionally, all the EC2 instances in this solution should enable the Amazon EC2 automatic recovery feature. This resolves issues if the hardware that hosts an EC2 instance becomes impaired. This feature recovers the instance on different underlying hardware and reduces the need for manual intervention.

The OEM OMR (database) EC2 instance should follow Oracle’s general best practices for high availability. This includes running the database in ARCHIVELOG mode and enabling flashback database. Database backups should be sent directly to Amazon S3 via the OSB module for Amazon S3. OSB should be implemented with both OEM solutions. Amazon S3 provides data protection while in transit (as it travels to and from Amazon S3) and at rest (while it’s stored on disks in Amazon S3). You can protect data in transit using Secure Socket Layer/Transport Layer Security (SSL/TLS) or client-side encryption. We recommend using server-side encryption (SSE) for this solution. When you use server-side encryption with Amazon S3-managed keys (SSE-S3), each object is encrypted with a unique key. As an additional safeguard, it encrypts the key with a primary key that it regularly rotates. Amazon S3 SSE uses one of the strongest block ciphers available, 256-bit Advanced Encryption Standard (AES-256), to encrypt your data.

Configure the NLB to access the OEM OMSs designated for the OEM console users. The NLB should be set up using pass-through mode to terminate SSL on the OEM OMS EC2 instances. Additionally, use the NLB sticky session feature (also known as session affinity) to enable the load balancer to bind a user’s session to a specific target. This ensures that all requests from the user during the session are sent to the same target. This feature is useful for servers that maintain state information in order to provide a continuous experience to clients. 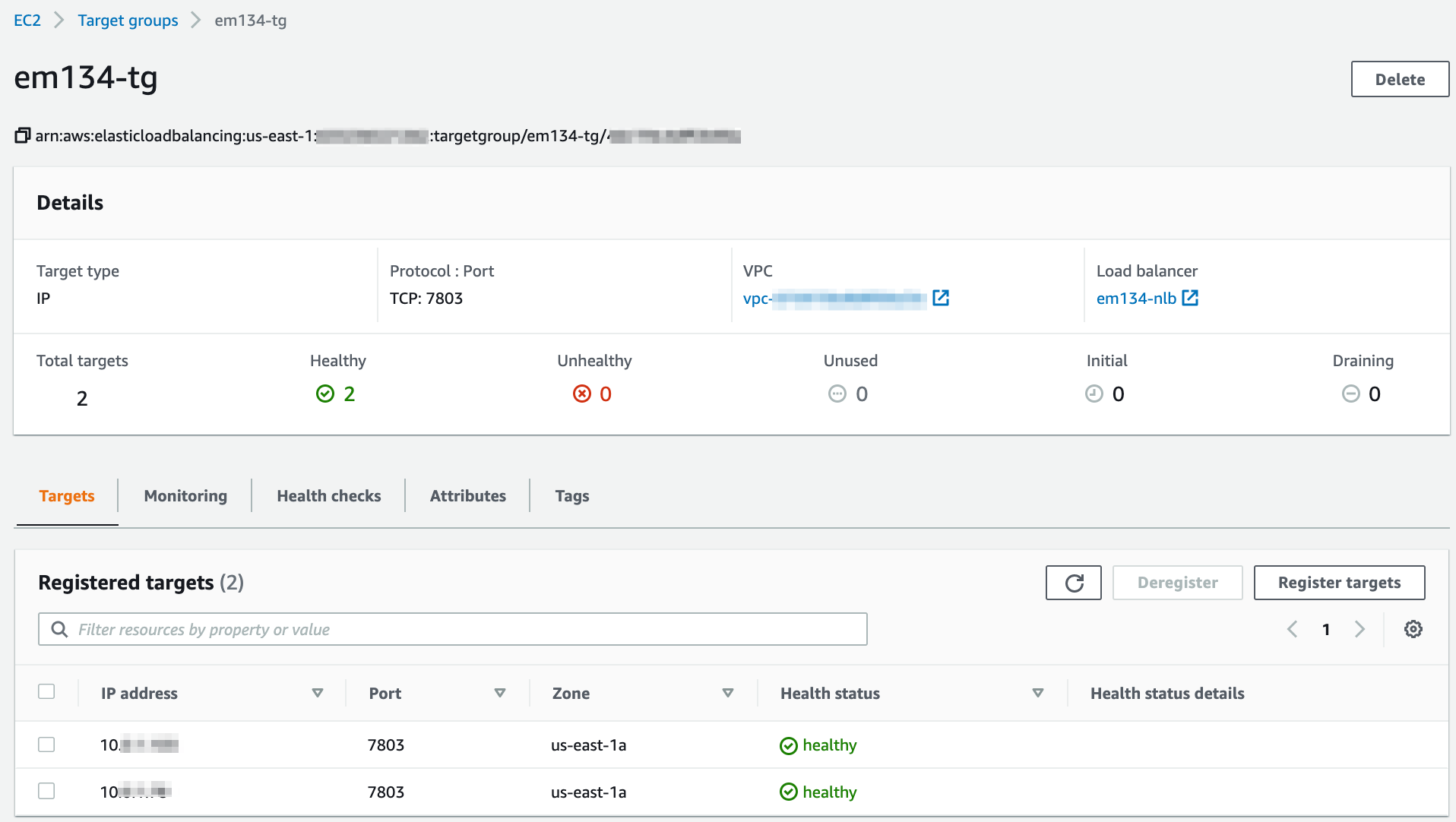 We can perform this Oracle installation using a Java UI (such as Oracle runInstaller or Oracle DBCA) or via command line (silent install). We recommend using the Java UI. XQuartz is recommended for macOS as a X Windows client. XQuartz is an open-source project.

This blog has been tested and validated using the following Oracle software versions and patches:

After successfully installing the AWS native OEM HA architecture, you can access the OEM console via the NLB URL. 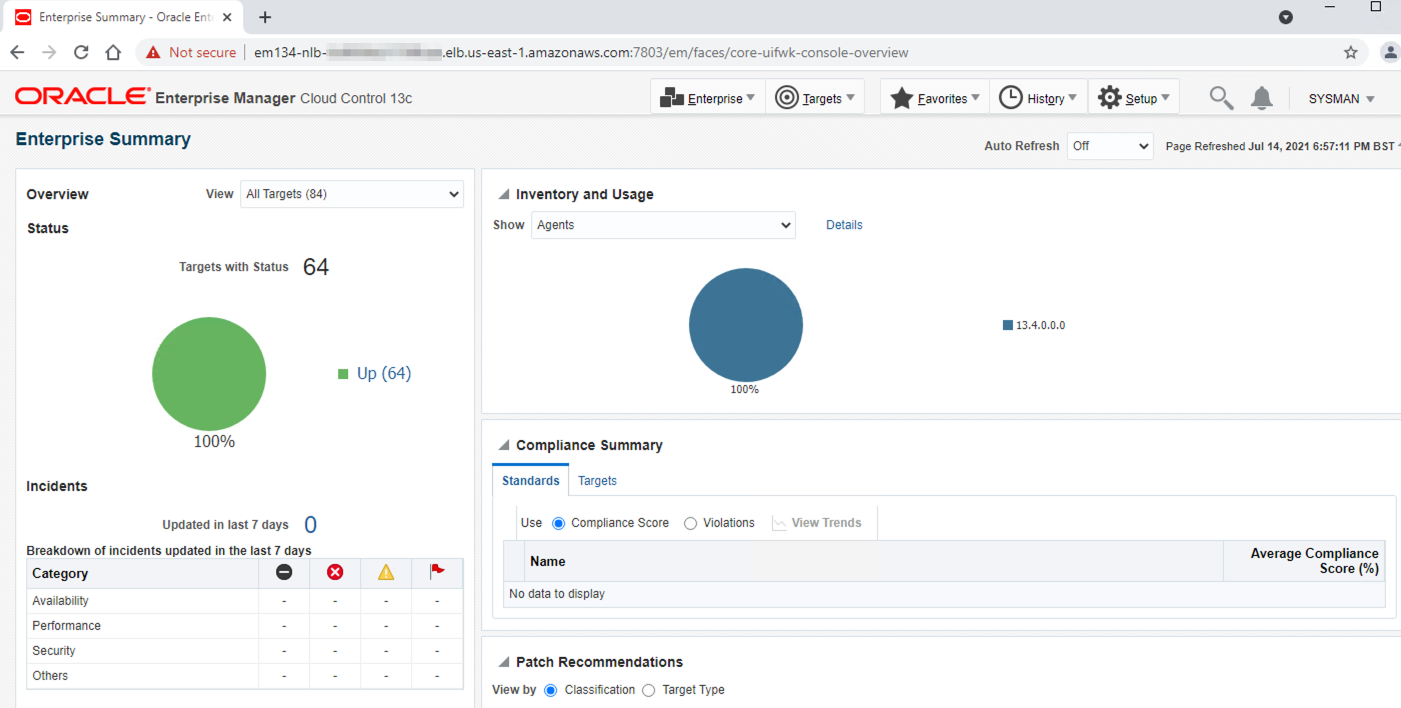 The OEM environment should undergo a stress test to ensure that it can easily scale up to twice the number of expected concurrent users. Additionally, monitor the OEM EC2 instances via CloudWatch, and publish notifications to Amazon SNS. If CPU utilization exceeds 80% or I/O throughput is throttled, consider changing the EC2 instance type, EBS volume type, or Provisioned IOPS setting.

Also set up CloudWatch alarms for AWS CloudTrail events. For example, a CloudWatch alarm should be triggered when configuration changes occur on security groups. This alerts the operations team when someone attempts to gain access to the OEM EC2 instances.

We recommend using CloudWatch Logs to store logs (including the OEM error logs). For security purposes, make sure the HOSM (execution) role used is following the least privilege design. We suggest only giving access to PutLogEvents to the EC2 instances.

In this post, we provided two high availability solutions to deploy OEM in AWS.

To learn more about OEM and its integration with Amazon RDS for Oracle, refer to AWS documentation.

Marvin Vinson is an Oracle Database Specialist for AWS. He works in the Worldwide Public Sector (WWPS) organization. He is focused on migrating Oracle workloads to AWS.