If you have mission-critical workloads running on an on-premises Microsoft SQL Server database, you may be looking for ways to migrate to AWS while keeping the same database engine (homogeneous migration) with minimal to near-zero downtime. This post provides a solution for migrating your on-premises SQL Server database to Amazon RDS for SQL Server using the SQL Server backup and restore method in conjunction with AWS Database Migration Service (AWS DMS) to minimize downtime. This method is useful when you have to migrate the database code objects, including views, stored procedures, and functions, as part of the database migration. This solution is applicable to SQL Server of any database size. It keeps the database available for the application during migration and when you need to perform validation on the target database while the data is getting replicated from source to target, thereby saving time on data validation. However, you can only use this solution when there are no limitations on using SQL Server as a source for AWS DMS.

Before you get started, you must complete the following prerequisites:

The solution consists of two stages.

Stage one includes a one-time backup and restore of the SQL Server database:

Backing up the SQL Server database from the on-premises source

The log sequence number (LSN) value is a three-part, uniquely incrementing value, consisting of the following:

The following screenshot shows the output.

After you upload the file to Amazon S3, it’s available for Amazon RDS to restore. To restore the database, use the following code:

This step concludes the first stage of migrating the SQL Server database and existing data that was present in the database to the point when the backup was taken at the source database.

To migrate the data that changed from when the database full backup was taken, and to keep the data changes at the source database continuously applied to the target Amazon RDS, the second stage uses AWS DMS.

You now use the LSN that you captured earlier after taking the database full backup in the source database to get the start point for the migration task based on the last backup restored in Amazon RDS. In the Task settings section, for CDC start mode, select Specify log sequence number. For System change number, enter the LSN you captured earlier.

This starts processing changes from the source to target database using the LSN provided.

For Target table preparation mode, for the tables to remain unaffected if they already exist at the target, select Do nothing if it’s not selected by default.

It is optional to enable validation. When validation is enabled, AWS DMS can compare the data at the source and the target and ensures that your data is migrated accurately, however it requires additional time to complete.

Since we’re migrating ongoing changes for the entire database, we use a wild card (%) in the selection rules. This option includes all schemas and tables in the database for the migration task.

You can monitor the task using AWS DMS metrics. When data changes in the source database start replicating to the target database, they’re replicated continuously until the AWS DMS task is manually stopped. If you have enabled validation option during task creation, AWS DMS performs data validation for tables with primary keys. You can monitor this via the Validation state column, as shown in the screenshot. For tables with no primary keys, the AWS DMS task uses SQL Server CDC. You can count the rows in the source and target databases to validate the data; this count has to match in both databases. 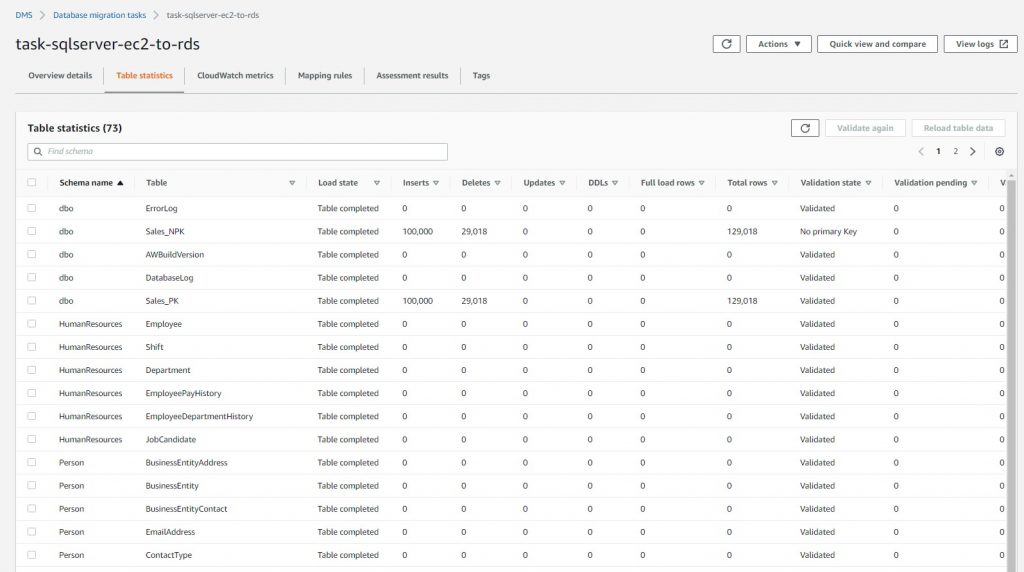 You can use CloudWatch to monitor the AWS DMS task for latency between the source and target databases, and choose a window when there is low latency to cut over to the target database. For more information about monitoring in CloudWatch, see Replication task metrics.

Praveen Marthala is a Database Consultant with the Professional Services team at AWS. Praveen is passionate about building high-available, high-performance, high-security, and cost-effective databases that help customers achieve the best outcome with workloads on AWS.