Most organizations create multiple AWS accounts because they provide the highest level of resource and security isolation. In this blog post, I will discuss how to use cross account AWS Identity and Access Management (IAM) access to orchestrate continuous integration and continuous deployment.

Do I need multiple accounts?

If you answer “yes” to any of the following questions you should consider creating more AWS accounts:

The identities in this use case are set up as follows:

Developers check the code into an AWS CodeCommit repository. It stores all the repositories as a single source of truth for application code. Developers have full control over this account. This account is usually used as a sandbox for developers.

A central location for all the tools related to the organization, including continuous delivery/deployment services such as AWS CodePipeline and AWS CodeBuild. Developers have limited/read-only access in this account. The Operations team has more control.

Applications using the CI/CD orchestration tested in the ToolsAccount are deployed to production from this account. Developers and the Operations team have limited/read-only access in this account.

In this solution, we will check in sample code for an AWS Lambda function in the Dev account. This will trigger the pipeline (created in AWS CodePipeline) and run the build using AWS CodeBuild in the Tools account. The pipeline will then deploy the Lambda function to the Test and Prod accounts.

Note: Follow the steps in the order they’re written. Otherwise, the resources might not be created correctly. Use this code repository for the walkthrough.

In the output section of the CloudFormation console, make a note of the Amazon Resource Number (ARN) of the CMK and the S3 bucket name. You will need them in the next step.

What did we just do? 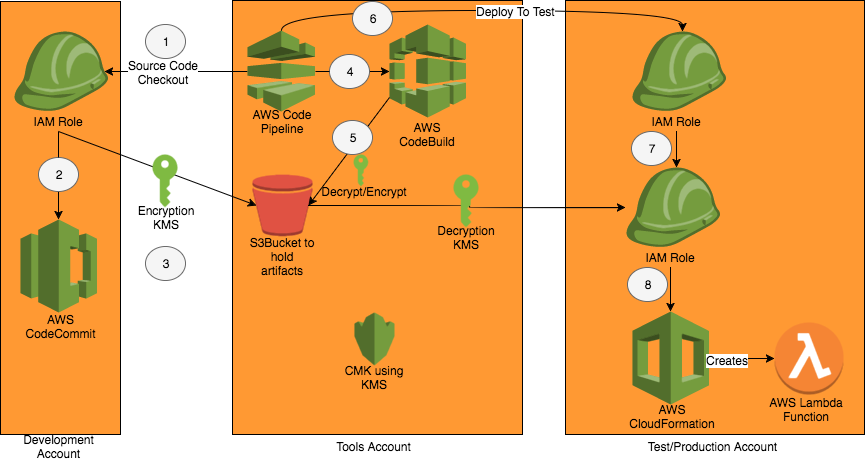 This is what the pipeline looks like using the sample code:

Creating multiple AWS accounts provides the highest degree of isolation and is appropriate for a number of use cases. However, keeping a centralized account to orchestrate continuous delivery and deployment using AWS CodePipeline and AWS CodeBuild eliminates the need to duplicate the delivery pipeline. You can secure the pipeline through the use of cross account IAM roles and the encryption of artifacts using AWS KMS. For more information, see Providing Access to an IAM User in Another AWS Account That You Own in the IAM User Guide.