Keeping up with your dependencies: building a feedback loop for shared libraries

In a microservices world, it’s common to share as little as possible between services. This enables teams to work independently of each other, helps to reduce wait times and decreases coupling between services.

However, it’s also a common scenario that libraries for cross-cutting-concerns (such as security or logging) are developed one time and offered to other teams for consumption. Although it’s vital to offer an opt-out of those libraries (namely, use your own code to address the cross-cutting-concern, such as when there is no version for a given language), shared libraries also provide the benefit of better governance and time savings.

To avoid these pitfalls when sharing artifacts, two points are important:

Based on those two factors, we’re looking for the following solution:

In this blog post I develop a solution that takes care of both those problems. I use Amazon EventBridge to be notified on new releases of a library in AWS CodeArtifact. I use an AWS Lambda function along with an AWS Fargate task to automatically create a pull request (PR) with the new release version on AWS CodeCommit. Finally, I use AWS CodeBuild to kick off a build of the PR and notify the library producer via EventBridge and Amazon Simple Notification Service (Amazon SNS) in case of a failure.

Let’s start with a short introduction on the services I use for this solution:

The resulting flow through the system looks like the following diagram. 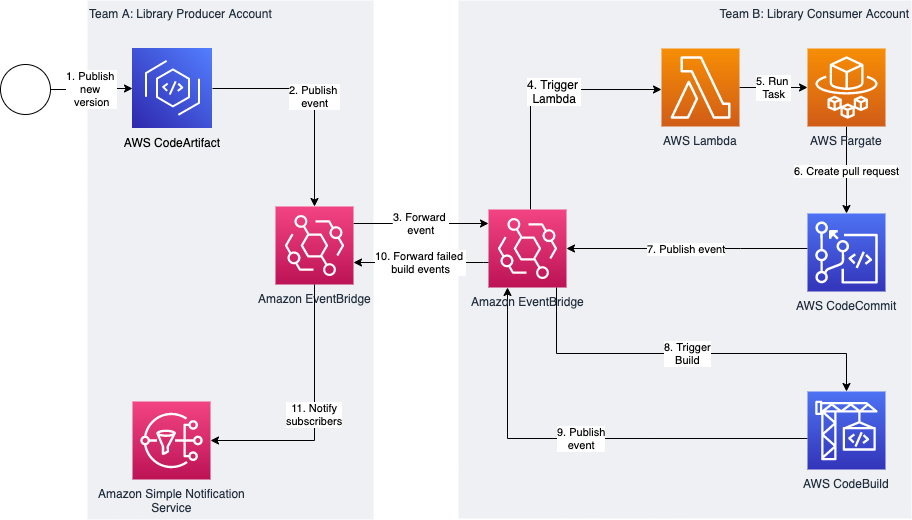 In my example, I look at two independent teams working in two different AWS accounts. Team A is the provider of the shared library, and Team B is the consumer.

Let’s do a high-level walkthrough of the involved steps and components:

A central component of the solution is Amazon EventBridge. I use EventBridge to receive and react on events emitted by the various AWS services in the solution (e.g., whenever a new version of an artifact gets uploaded to CodeArtifact, when a PR is created within CodeCommit or when a build fails in CodeBuild). Let’s have a high-level look on some of the central concepts of EventBridge:

In this section I walk through the most important parts of the solution. The complete code can be found on GitHub. For a detailed view on the resources created in each account please refer to the GitHub repository.

The code for the shared library producer and consumer is written in Java and uses Apache Maven for dependency management. However, the same concepts apply to e.g., Node.js and npm.

With that the producer account has the permission to publish events into the event bus of the consumer account.

I’m interested in CodeArtifact events that are published on the release of a new artifact. I first create a Rule which matches those events. Next, I add a target to the rule which targets the event bus of account B. As of this writing there is no CDK construct available to directly add another account as a target. That is why I use the underlying CloudFormation CfnRule to do that. This is called an escape hatch in CDK. For more information about escape hatches, see Escape hatches.

I established the connection between the events produced by Account A and Account B: The events now are available in Account B’s event bus. To use them, I add a rule which matches this event in Account B:

Now that I created a rule to trigger anytime a new package version is published, I will now add an EventBridge target which  triggers my runTaskLambda Lambda Function. The below CDK code shows how I add our Lambda function as a target to the onLibraryRelease rule. Notice how I extract information from the event’s payload and pass it into the Lambda function’s invocation event.

Because I’m not interested in Maven SNAPSHOT versions (such as 1.0.1-SNAPSHOT), I have to find a way to filter those and only act upon non-SNAPSHOT versions. Even though content-based filtering on event patterns is supported by Amazon EventBridge, filtering on suffixes is not supported as of this writing. This is why the Lambda function filters SNAPSHOT versions and only acts upon real, non-SNAPSHOT, releases. For those, I start a custom Amazon ECS Fargate task by using the AWS JavaScript SDK. My function passes some environment overrides to the Fargate task in order to have the required information about the artifact available at runtime.

In the following function code, I pass all required information to create a pull request into the environment of the Fargate task:

With the environment set, I can use a simple bash script inside the container to create a new Git branch, update the pom.xml with the new dependency version, push the branch to CodeCommit, and use the AWS Command Line Interface (AWS CLI) to create the pull request. The Docker entrypoint looks like the following code:

After a successful run, I can check the CodeCommit UI for the created pull request. The following screenshot shows the changes introduced by one of my pull requests during testing: 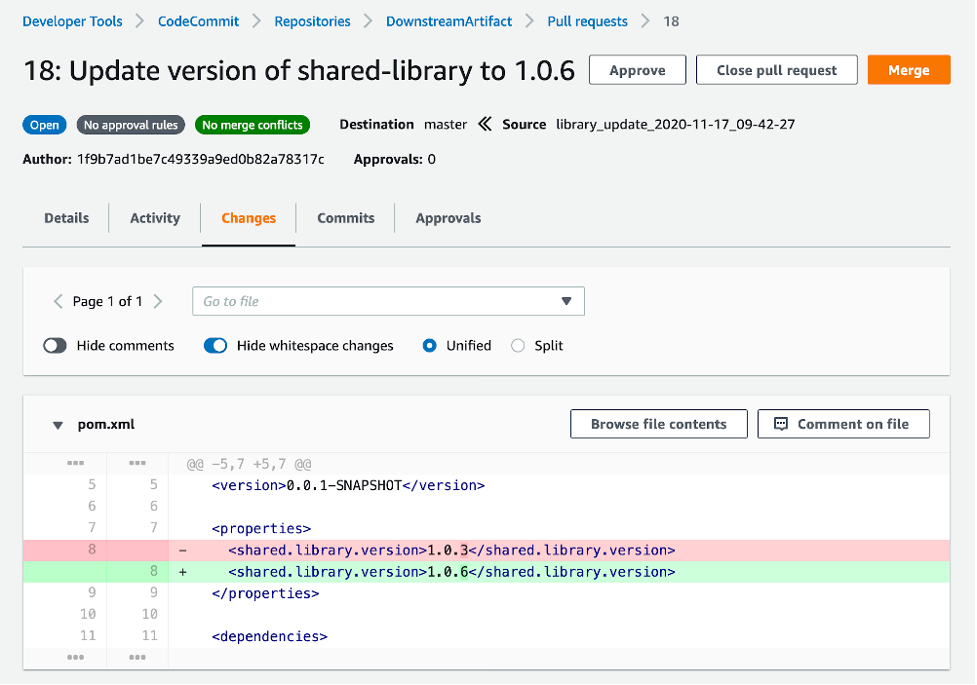 Now that I have the pull request in place, I want to verify that the dependency update does not break my consumer code. I do this by triggering a CodeBuild project with the help of EventBridge.

The ingredients I use are the same as with the CodeArtifact event. I create a rule that matches the event emitted by CodeCommit (limiting it to branches that match the prefix used by our Fargate task). Afterwards I add a target to the rule to start the CodeBuild project:

This triggers the build whenever a new pull request is created with a branch prefix of refs/head/library_update_.
You can easily add the build results as a comment back to CodeCommit. For more information, see Validating AWS CodeCommit Pull Requests with AWS CodeBuild and AWS Lambda.

My last step is to notify an SNS topic in in case of a failing build. The SNS topic is a resource in Account A. To target a resource in a different account I need to forward the event to this account’s event bus. From there I then target the SNS topic.

First, I forward the failed build event from Account B into the default event bus of Account A:

Then I target the SNS topic in Account A to be notified of failures:

See it in action

In this post, I automated the manual task of updating a shared library dependency version. I used a workflow that not only updates the dependency version, but also notifies the library producer in case the new artifact introduces a regression (for example, an API incompatibility with an older version). By using Amazon EventBridge I’ve created a loosely coupled solution which can be used as a basis for a feedback loop between library creators and consumers.

To improve the solution, I suggest to look into possibilities of error handling for the Fargate task. What happens if the git operation fails? How do we signal such a failure? You might want to replace the AWS Fargate portion with a Lambda-only solution and use AWS Step Functions for better error handling.

As a next step, I could think of a solution that automates updates for libraries stored in Maven Central. Wouldn’t it be nice to never miss the release of a new Spring Boot version? A Fargate task run on a schedule and the following code should get you going: