As Jeff Barr showed in his introductory blog post, Amazon Lex is a service that allows developers to build conversational interfaces for voice and text into applications. With Amazon Lex, the same deep learning technologies that power Amazon Alexa are now available to any developer, so you can quickly and easily build sophisticated, natural language conversational bots (chatbots). Amazon Lex’s advanced deep learning technology provides automatic speech recognition (ASR), for converting speech to text, and natural language understanding (NLU), to recognize the intent of text, so you can build applications with a highly engaging user experience.

What does it take to develop a functional chatbot using Amazon Lex? If you use one of the examples in the documentation, you can start interacting with your chatbot in about a minute or two.  And although it’s a start, it’s hardly sufficient.  Let’s see what else you need to do to build a chatbot.

Chatbot design is a nascent discipline with few established norms.  Only interactions with real users can teach us what’s frustrating and what’s delightful.  We recommend that you treat this section as an exploration of design considerations, not as a guide for bot design.  Here’s what we’ve learned from the millions of interactions with Amazon Alexa.

Simon Sinek urges us to start with why:  Why does this chatbot exist?  Good design starts with a clear goal:  Who is the user, and what is that user trying to accomplish?

You also need to think about modality and medium.  A helpful voice interface should anticipate that there are times when the user isn’t paying attention or simply can’t hear what was said, and offer the ability to repeat the last prompt or handle responses like “What?” or “Where were we?” gracefully.  For a text interface, this may not be necessary.  Some text interfaces might even support response cards, with images and buttons.

For the interface designer, emphasis is an essential tool. It lays out the norms for presenting information and recommending choices. The rules for achieving clarity vary depending on the mode (web UI, text chat, or voice).  Depending on the goal and mode, the tools used for emphasis can differ. Consider these examples of how an order could be placed in each of the three modes:

With a web experience, the user experience can emphasize “Place your order” to clearly call it out as the recommended choice and to remind the user that this action is a commitment on the customer’s part. In a chat experience, the convention is to list options in parentheses to let the user know what’s expected. You also can use text placement, whitespace, and capital letters for emphasis.

In a voice interaction, you replace this convention with a new norm that assures the user that she is in control of when the order will be placed. For example, you can use a confirmation when making significant changes to the order. Additionally, with voice, you might be able to control the speech rate, for example, speak slower for emphasis.  If no other means are available, you might simply use repetition.  Consider this example.

Let’s say that you need a voice bot to support conversations involving uncommon words such as when you order your latté:  “May I have a triple mocha please?”  Or, if you’re comfortable ordering a bot around, “Get me a triple mocha.”

Using the Amazon Lex console, we create a custom bot.  We call it “CoffeeBot” and use an IAM role that has the appropriate permissions to invoke Amazon Lex. To learn how to do this, see the Amazon Lex Getting Started guide.

As Jeff explained in his blog, Amazon Lex uses intents, slot types, and slots.  To promote reusability, intents and slot types are associated with an AWS account and can be used by multiple Amazon Lex bots.  As you make changes, you will notice that Amazon Lex automatically tracks a version for these resources so you know exactly what’s used for the particular version of the bot you’re testing.  While this might seem insignificant at first, it’s essential to support concurrent and continuous development.

When starting on a new bot, it’s often helpful to simply record how people normally engage in conversation for a single type of request, analyze those requests, and then extrapolate to a larger scope of requests.  For CoffeeBot, let’s focus on how someone might order a mocha at a coffee shop.

Consider the case where CoffeeBot hears “double short mocha.”  Did the user ask for a “short (8 oz.) mocha with two shots of espresso” or did something get lost while the user was actually asking for a “double shot mocha” without mentioning a size?  Validating the input is still necessary. The next post in this series will cover input validation.

When designing conversational interfaces, it’s important to remain focused. Some of the complexity we noted naturally disappears when you start with an app that “knows” who the user is and can handle payment.  If it was a particularly cold or wet day, this conversation might have included the weather as a topic.  Although it might be fun to model such tangents, that might not be the best use of your time.  Focus on the development tasks that substantially enhance the user experience instead of those that are merely nice to have.

Analysis like this reveals the structure of these conversations.  Although the snippets of information might be shared separately or together, in one of many possible sequences, and there might be optional add-ons for certain beverages. At the end of the day, there is a set of values that must be known in order to place an order for a mocha.  Accepting that you are catering to an essential subset of what you have discovered, and that these slots will be refined over time using a feedback loop, you start with some slot types for CoffeeBot.

Development teams will create their own conventions for making it easy to find shared resources, but we’ll use “cafe” as a prefix for ours.

Next, define a goal, known as an ‘intent’ in Amazon Lex terminology.  Although the bot might ultimately use multiple intents, let’s start with just one.  (Multiple bots can use the same intent, and potentially different versions of the same intent.)

It’s important to provide some examples of what you might expect users to actually say. Amazon Lex calls these examples “utterances.” This is important because Amazon Lex uses them to train machine learning models to recognize the right intents. This text doesn’t have to exactly match what the user says , and it’s good to start with a small set and then add permutations as needed.

Each utterance refers to one or more slots, and those slots must be defined. Each slot can also be associated with one or more prompts that Amazon Lex uses to elicit the value from the user. The Amazon Lex dialog manager keeps track of the slot values. It can also use the priority of each required slot to decide which one to prompt for next, as follows.

At this point, the bot is ready to place an order for coffee. We will worry about fulfillment in our Part 2 post.

Next, you build and test the bot. It’s very useful to test what you have so far because it’s easier to find and fix errors at this step than when you have a mobile app with a lot more going on. You can test it in the overlay that appears in the Amazon Lex console. 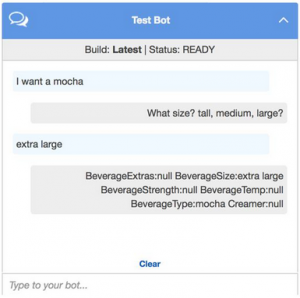 What just happened?  Although we didn’t configure this exact text as an utterance, the input text “I want a mocha” was matched to the cafeOrderBeverageIntent you created and the utterance was interpreted as I want a {BeverageType: mocha}.  Then, Amazon Lex determined that BeverageSize was required, and prompted with the default prompt for this slot, namely, What size?  tall, medium, large?.

Finally, when all required slots have been filled, Amazon Lex simply displayed the values as requested (“Return parameters to client”).

What if Lex doesn’t understand?  You can use clarification prompts in the intent editor on the console to try to elicit something different and, failing all else, exit gracefully.

With this configuration, we see that Amazon Lex uses different clarification prompts up to three times and then gives up using one of the hang-up phrases.  Why multiple prompts?  It’s true that you need just one, but having multiple prompts allows Amazon Lex to choose, which maintains spontaneity. 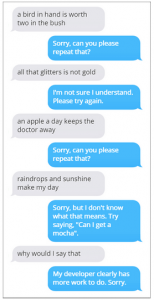 You also can configure the bot to prompt the user right before the order is placed. The confirmation prompts are listed in intent editor on the console.

Confirmation prompts don’t need to include every single slot that you have set up, especially when some slots are required only if others have been filled.  It’s a good idea to include required slots in the prompt, but you can also use a code hook to customize the prompt.  (More on that in the next post.)

Notice that the confirmation prompt can include slot values.  Let’s see how that works out. 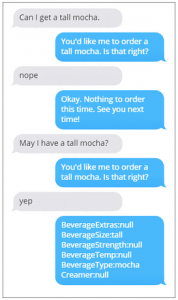 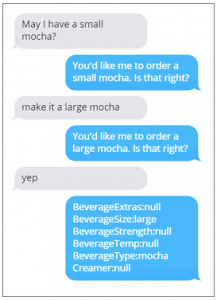 What does this show?  With no additional configuration, Amazon Lex correctly interpreted the user’s desire to swap the size, right from the confirmation prompt.

In this post, we looked at some elementary bot design decisions.  We started with some raw observations about conversation flow, narrowed in on a particular transaction, and quickly built an interactive bot with some defaults.  In the test console, we made sure that the bot behaves as expected.

In Part 2, we look at some more considerations and develop this elementary bot so that it can understand voice.

Note: The code for for Part 1 and Part 2 is located in our Github repo.

As a Solutions Architect, Niranjan Hira is often found near a white board helping our customers assemble the right building blocks to address their business challenges.  In his spare time, he breaks things to see if he can put them back together.