Understanding the direction and context of an ever-evolving conversation is beneficial to building natural, human-like conversational interfaces. Being able to classify utterances as the conversation develops requires managing context across multiple turns. Consider a caller who asks their financial planner for insights regarding their monthly expenses: “What were my expenses this year?” They may also ask for more granular information, such as “How about for last month?” As the conversation progresses, the bot needs to understand if the context is changing and adjust its responses accordingly.

Amazon Lex is a service for building conversational interface in voice and text. Previously, you had to write code to manage context via session attributes. Depending on the intent, the code had to orchestrate the invocation of the next intent. As the conversation complexity and the intent count increased, managing the orchestration could become more cumbersome.

Starting today, Amazon Lex supports context management natively, so you can manage the context directly without the need for custom code. As initial prerequisite intents are filled, you can create contexts to invoke related intents. This simplifies bot design and expedites the creation of conversational experiences.

This post uses the following conversation to model a bot for financial planning:

In this post, we build an Amazon Lex bot called FinancialPlanner, which is available for download. Complete the following steps:

The context management feature defines input tags and output tags that the bot developer can set. You use these tags to manage the conversation flow. For our use case, we set expenses as the output context tag in ExpensesIntent. We also use this as the input context for ExpensesFollowupIntent. We can also configure the output tag with a timeout, measured by conversation turns or seconds since the initial intent was invoked.

The following screenshot shows the Context configuration section on the Amazon Lex console.

The following screenshot shows the specific parameters for the expenses tag. 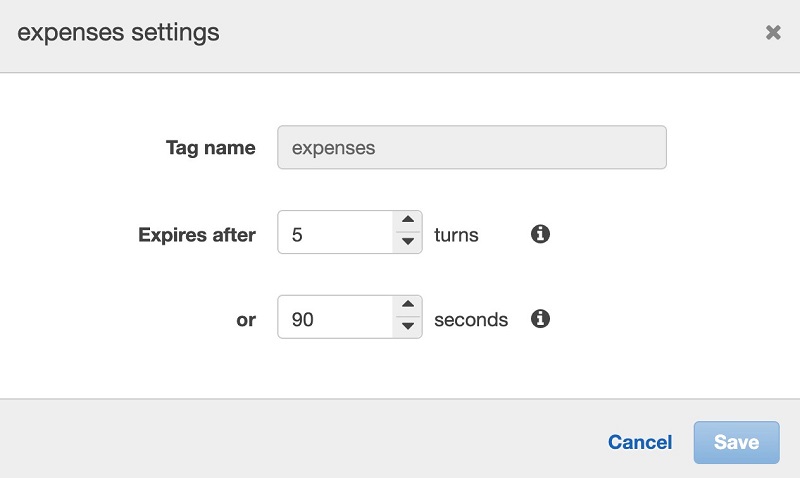 Similar to expenses, we now set the context for income intents. For IncomeIntent, set the output context tag as income. We use this context as the input context for IncomeFollowupIntent.

The following screenshot illustrates how the context tags are used to invoke the appropriate intent. 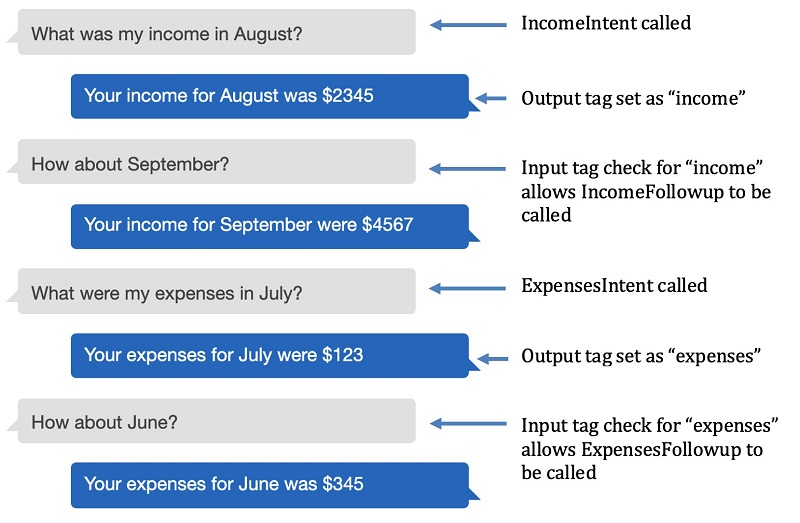 You can configure the behavior of the context attributes by editing the threshold. Editing the number of turns sets the limit for the number of interactions with the bot, and the number of seconds is from the original input tag being set. As long as the intent with the output tag occurs before the turn- or time-based timeout, the user can invoke the intent based on the input context.

Along with the context management feature, you can also set default slot values. You can set the slots to populate from a context, a session attribute, or a value. In our sample bot model, the {month} slot in ExpensesIntent is set to August as the default slot value.

With the new Amazon Lex context management feature, you can easily orchestrate when to enable intents based on prior intents, and pass specific user data values from one intent to another. This capability allows you to create sophisticated, multi-turn conversational experiences without having to write custom code. Context carry-over, along with default slot values, simplifies bot development and allows you to easily create more natural, conversational user experiences. For more information, see Setting Intent Context documentation.

Blake DeLee is a Rochester, NY-based conversational AI consultant with AWS Professional Services. He has spent five years in the field of conversational AI and voice, and has experience bringing innovative solutions to dozens of Fortune 500 businesses. Blake draws on a wide-ranging career in different fields to build exceptional chatbot and voice solutions.

Esther Lee is a Product Manager for AWS Language AI Services. She is passionate about the intersection of technology and education. Out of the office, Esther enjoys long walks along the beach, dinners with friends and friendly rounds of Mahjong.