Customers want a single pane of glass for their systems operations where they can visualize the health and performance of applications running in several AWS Regions and in their on-premises environment.

Simple Network Management Protocol (SNMP) is an internet standard protocol for collecting and organizing information about managed devices on IP networks and for modifying that information to change device behavior. Devices that typically support SNMP include routers, switches, firewalls, servers, and appliances.

Logstash is a free and open server-side data processing pipeline that ingests data from a multitude of sources, transforms it, and then sends it to your preferred analytics solution.

You can use SNMP to monitor on-premises devices through AWS Direct Connect or AWS Site-to-Site VPN. You can establish a private virtual interface from your on-premises network directly to your VPC created in Amazon Virtual Private Cloud (Amazon VPC).

In this blog post, I provide a deployable demo and a walkthrough that you can use to set up an SNMP monitoring solution. You can tailor the repository assets as appropriate for your needs. This solution does not cover SNMP traps or SNMP set commands.

In this solution, Logstash acts as a relay server that sits between the managed devices that you want to monitor and Amazon CloudWatch. I use two Logstash plugins: SNMP (input plugin) and CloudWatch (output plugin). The input plugin collects information (using SNMP polling) from the monitored devices. These devices must be running SNMP daemons, listening on standard port 161 (Poll). After Logstash processes the information, the output plugin forwards the metrics to CloudWatch using standard AWS APIs. I use AWS Secrets Manager and Logstash keystore for SNMP credential management. You can expand this solution by using Logstash Snmptrap input plugin.

In the example application, there are three object identifiers (IfInOctets, IfOutOctets, and sysUpTimeInstance) configured to be polled every minute. These OIDs provide total input and output bytes for a given network interface and the system uptime since last reboot. These OIDs are ISO standard and do not require importing MIBs. For more information, see the Importing MIBs in the Logstash documentation.

In the GitHub repository, there are detailed deployment instructions for the example application. The repo contains Logstash settings files, configuration files and an AWS CloudFormation template that automates the entire setup as explained later in the post. 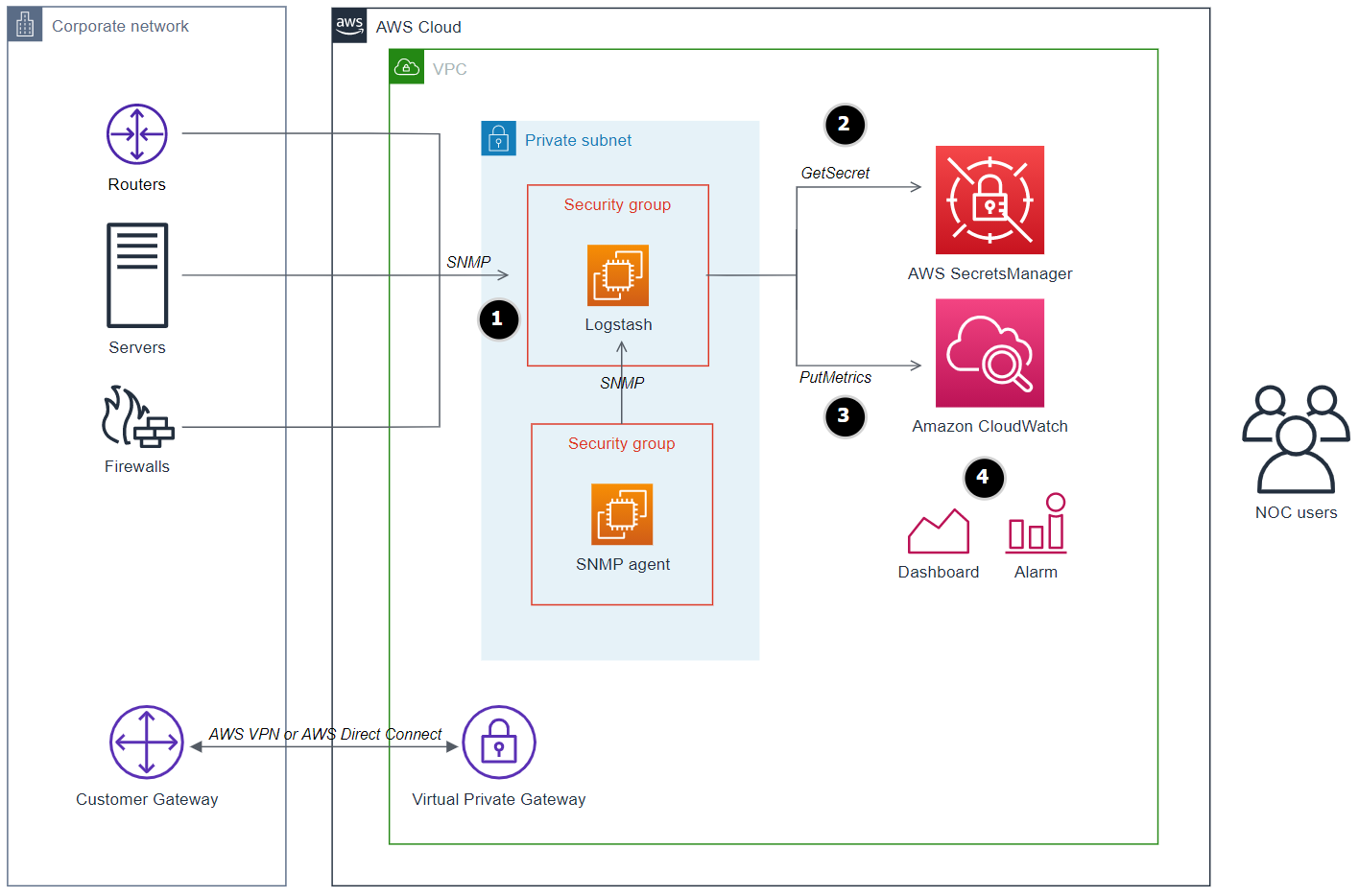 Per the Security pillar of the AWS Well-Architected Framework, apply security at all layers. Apply a defense-in-depth approach with multiple security controls to all layers (edge of network, VPC, load balancing, every instance and compute service, operating system, application, and code).

The Logstash server and simulator devices (in this demo solution, EC2 instances) do not need to be reachable from the internet. However, they need outbound internet access to download and update software packages from Amazon Linux 2 repositories, yum repositories, and the Elastic.co repository.

To simplify the demo, you can use a VPC with an internet gateway route and a public subnet with assigned public IP addresses for the instances. This will allow inbound access (SSH for troubleshooting) and outbound access to download the required packages. In production environments, we recommend that you launch the instances in private subnets with a NAT gateway route.

The Logstash instance: No inbound rules are required. Leave it empty to deny any inbound traffic or, optionally, to allow SSH to log on the instance for troubleshooting or viewing Logstash debug logs.

To demonstrate the authentication capability of SNMPv3, I configure the Logstash SNMP input plugin with SNMPv3, which supports authentication with devices and the encryption of traffic. I also create snmpv3 users on the simulated devices running an SNMP daemon.

Because Logstash server must authenticate with the simulated devices, Logstash configuration files are configured with SNMPv3 credentials. A good practice is to avoid hardcoding credentials in configuration files or instance environment variables. For this reason, you can use AWS Secrets Manager to store and retrieve the SNMPv3 credentials required to authenticate with the devices. After the EC2 launch script retrieves credentials from AWS Secrets Manager, it stores them in the Logstash secrets keystore running on the same Logstash server instance.

Note: SNMPv1 and SNMPv2c versions do not support authentication. Some older devices might still be running these versions. You can update the Logstash plugin configuration for these older versions, but I do not cover that in this post.

The Logstash instance profile is configured with a role with two attached policies to communicate with AWS Secrets Manager and Amazon CloudWatch:

The SNMP instances profile is configured with a role with one attached policy:

Prerequisites for deploying the solution with AWS CloudFormation

To deploy the example application, you need the following:

Download and save the provided CloudFormation template from the GitHub repository, then complete the following steps: 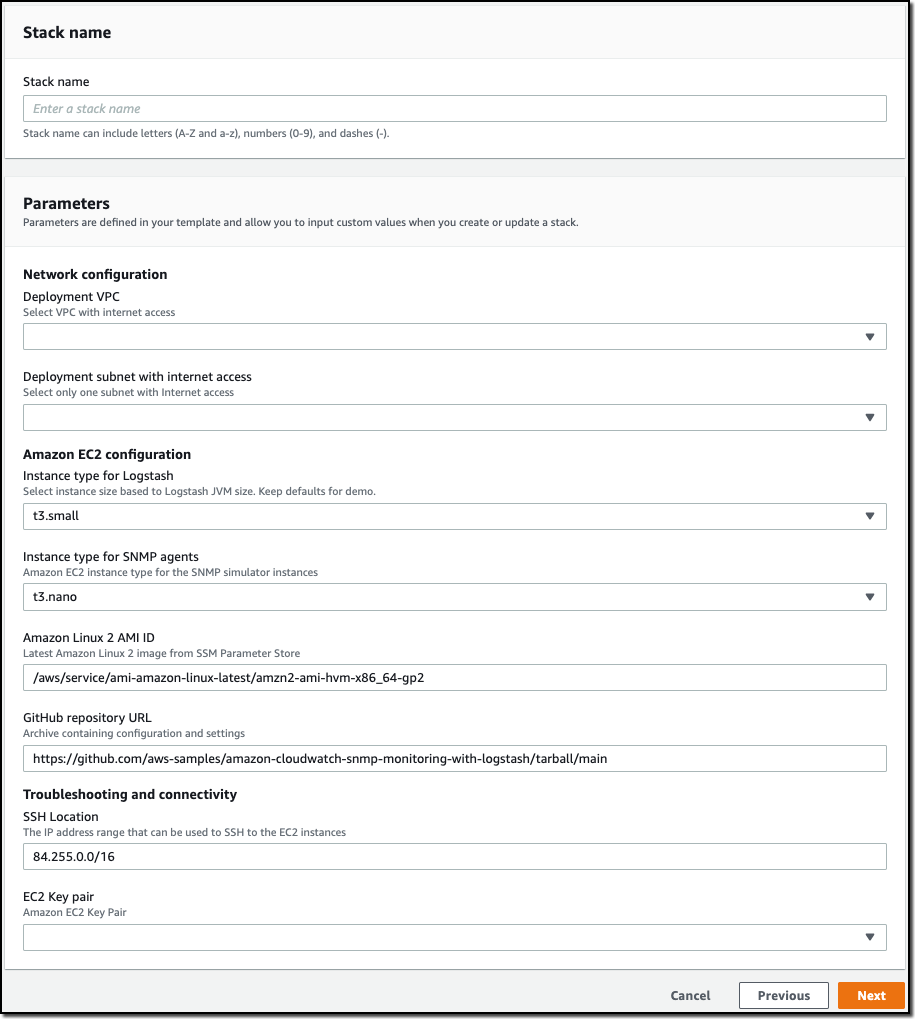 This stack creates one EC2 instance for the Logstash server and two instances running the SNMP daemon, fully configured with cfn-init helper scripts. The deployment also creates a secret with a randomly generated password in AWS Secrets Manager, the necessary EC2 IAM profiles and locked down security groups.

At a high level, the instances are bootstrapped by cfn-init as follows: 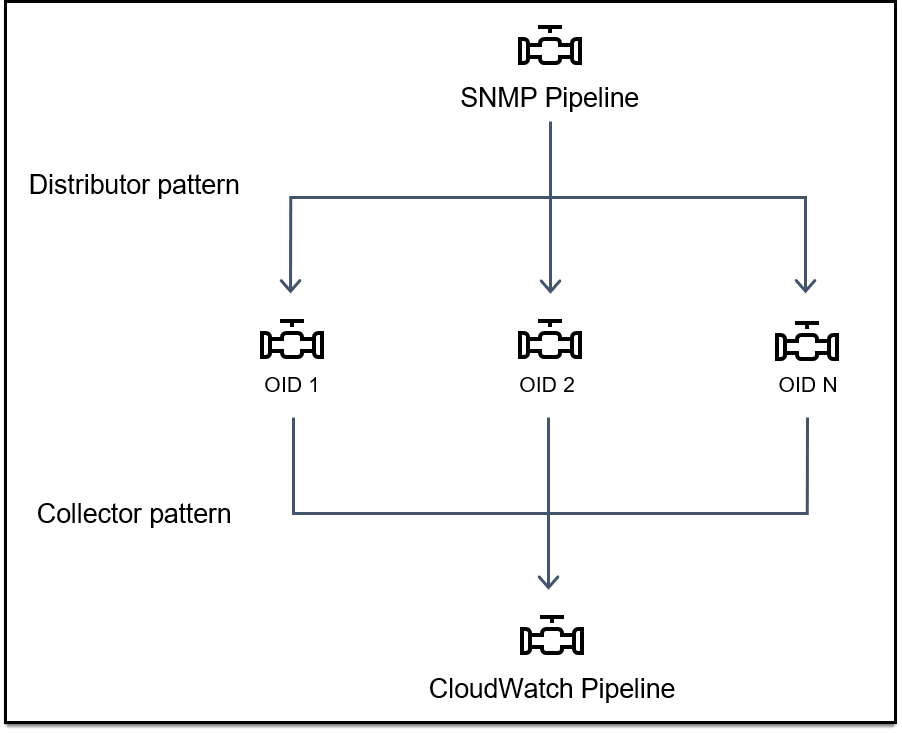 Figure 4: An SNMP pipeline distributing to multiple filter pipelines and collected by a CloudWatch pipeline 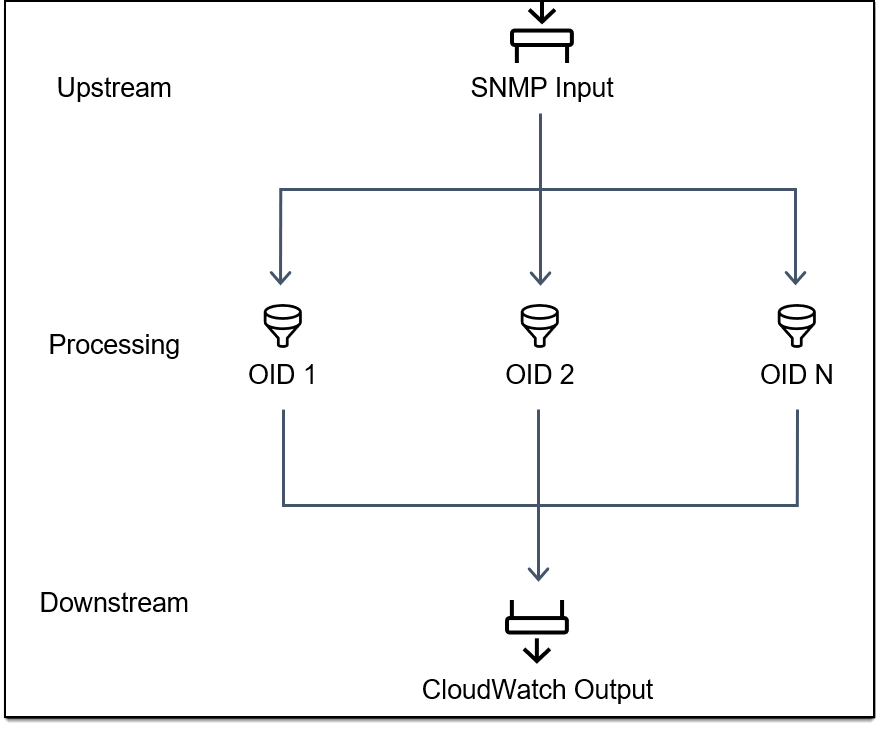 Upstream pipeline: A single configuration file runs the SNMP input plugin that connects to hosts using their IP address and port. It selects OIDs for polling and produces Logstash events. There is one event per host. Each event contains the data for all the polled OIDs in the form of field/value. Finally, the events are sent to the processing pipelines through Logstash outputs. Security level is set to “authPriv” for authentication and encryption in transit. Figure 6 shows the snmp.conf file. 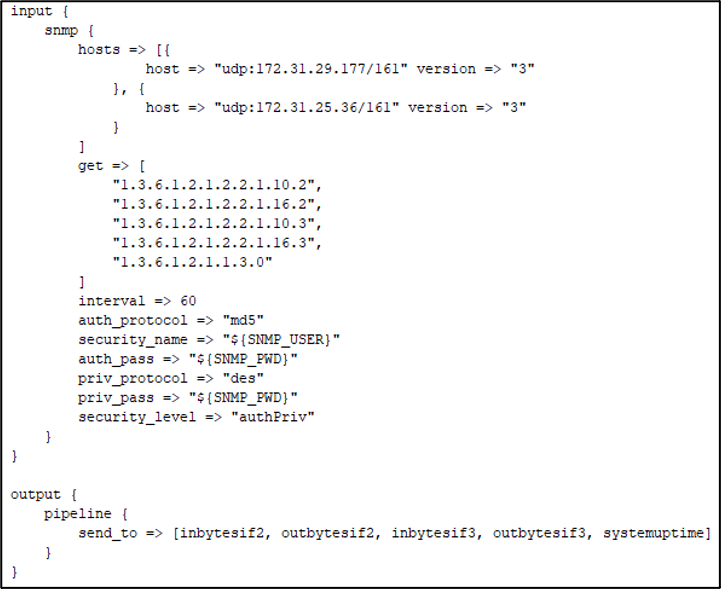 Processing pipelines: One small configuration file per OID. The filter stage maps the OID field and value to a CloudWatch metric and then forwards the event to the final stage. Figure 7 shows the systemuptime.conf file.

Downstream pipeline: In this final stage, The filter stage adds CloudWatch fields (metric dimensions and a custom namespace in CloudWatch) that apply to all metrics. Figure 8 shows the cloudwatch.conf file.

Logstash configurations are programmable and configurable, enabling many possibilities to achieve the same outcome.

Logstash server can periodically check for configuration updates by setting logstash.yml flag (config.reload.automatic: true) and automatically reloads the pipeline. You can use AWS CodeCommit for source control and AWS CodeDeploy to deploy the updated configurations to the Logstash EC2 instance. You can automate the process using AWS CodePipeline.

Now that SNMP metrics are populated in CloudWatch, from the left navigation pane of the CloudWatch console, choose Metrics and then choose All metrics. In Custom Namespaces, choose the SNMP namespace.

Note: it may take up to five minutes for the metrics to appear in the custom namespace.

You can now create dashboards and set alarms. 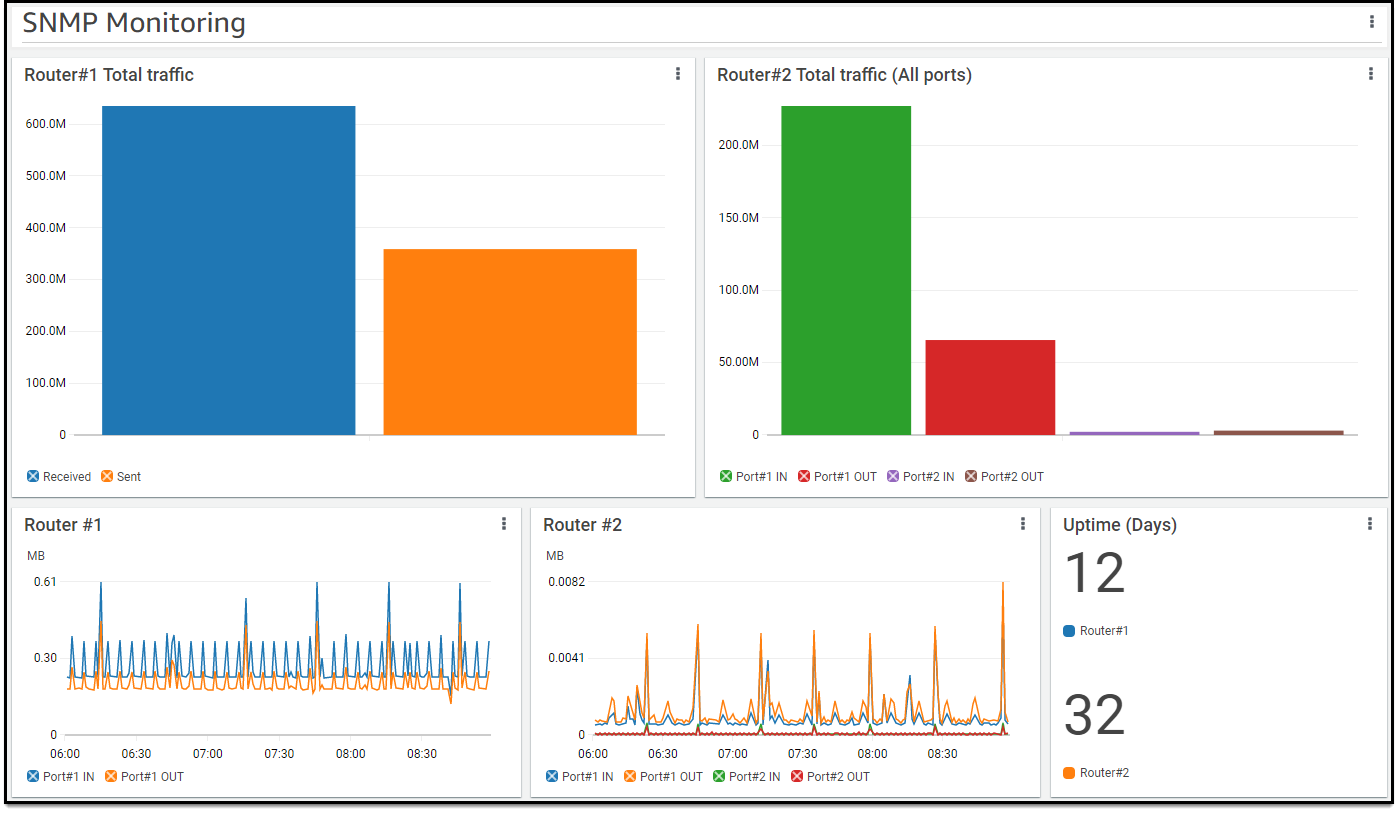 Figure 10: Example of a monitoring dashboard for two devices

You can investigate the following log and configuration files to troubleshoot your deployments:

To clean up the demo, open the CloudFormation console and delete the stack.

CloudWatch provides a single pane of glass for monitoring and observability across applications and infrastructure. In this post, I showed you how to integrate SNMP-enabled devices with CloudWatch using a lightweight Logstash solution in a secure way. I also shared options for continuous deployment of Logstash using AWS Developer Tools. Logstash is also available as a Docker container and on AWS Marketplace.