Migrating accounts between AWS Organizations from a network perspective

In this post, we’ll discuss the considerations, recommendations, and approach for migrating AWS accounts between AWS Organizations from a networking perspective. We’ll explain the behavior of AWS networking resources when AWS accounts are moved between Organizations. We’ll also analyze the behavior from different viewpoints including service availability, management and governance, as well as commercial and operations.

Sometimes customers ask: What would be the impact to the existing networking setup when AWS accounts are moved to a different Organization? Understanding the impact can be difficult when there are multiple AWS accounts involved in network connectivity setup. In this post, we’ll discuss the following networking scenarios:

With AWS Transit Gateway customers can connect multiple Amazon Virtual Private Clouds (Amazon VPC) from the same or different account. To connect VPCs from a different account, customers must share the Transit Gateway using AWS Resource Access Manager (RAM). When you create a resource share like Transit Gateway, you grant a principal that will consume the resource. The principal could be an individual AWS account, Organization, Organizational unit (OU), AWS Identity and Access Management (IAM) user, or IAM role.

Figure 1 – Transit Gateway between two accounts under the same Organization

In regards to billing, the payer account in the new Organization will be responsible for the networking resources owned by the newly moved account. In the example shown in the figure above, this means:

You can use VPC Peering to interconnect two VPCs so that you can route the traffic between them. The requestor and acceptor VPC can be from the same or different AWS accounts. The following figure shows the condition when Account A and Account B are still under the same Organization A.

Figure 4 – VPC Peering after Account A moved to Organization Z

In terms of cost, there’s no change. Each side of the connection will still be charged for cross availability zones data transfer. For more information, see Amazon EC2 Pricing.

If we refer to the figure above, cross-AZ data transfer charges between VPC A3 and VPC B2 now will be paid by payer account in Organization A and Z respectively.

is a fully-managed service that creates a secure connection between your data center or branch office and AWS, via the internet. You can configure Virtual Private Gateway or Transit Gateway as the target gateway. The following figure shows the hybrid connectivity from the customer’s premise to Account A using Site-to-site VPN. 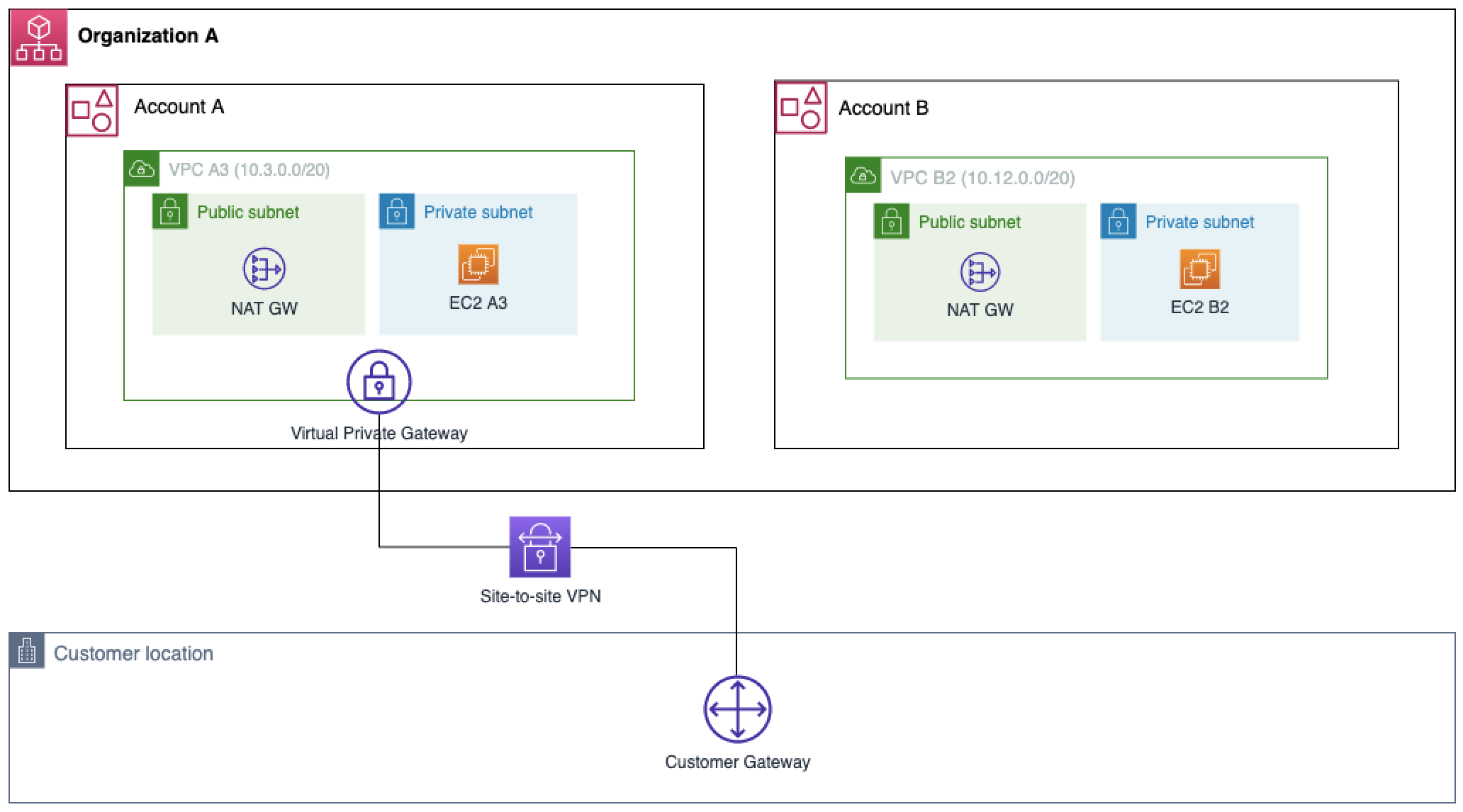 Transit VPC architecture also uses the same approach by using IPSec VPN to connect multiple VPCs together. With Transit VPC you must host VPN appliances with that will aggregate multiple Site-to-Site VPNs from all other VPCs (in the same or different accounts). 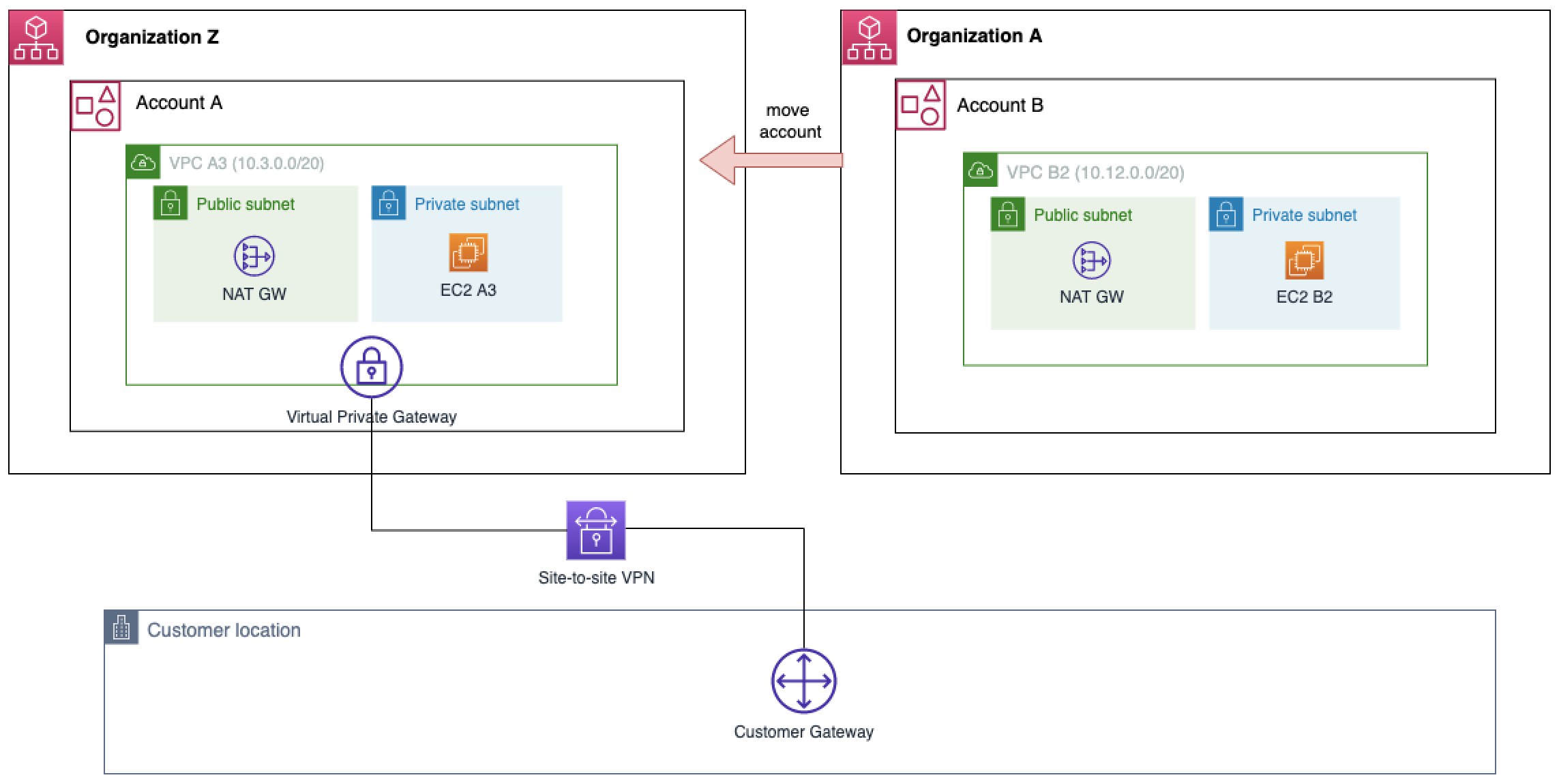 Account movement to a new Organization won’t disrupt Site-to-Site VPN connectivity. In the example shown in the figure above, active VPN tunnels toward Account A will remain connected. In regard to billing, if we refer to the figure above, Site-to-Site VPN hourly charges and the data transfer out will now be paid by Organization Z’s payer account.

AWS Direct Connect is a cloud service that links your network directly to AWS to deliver consistent, low-latency performance. 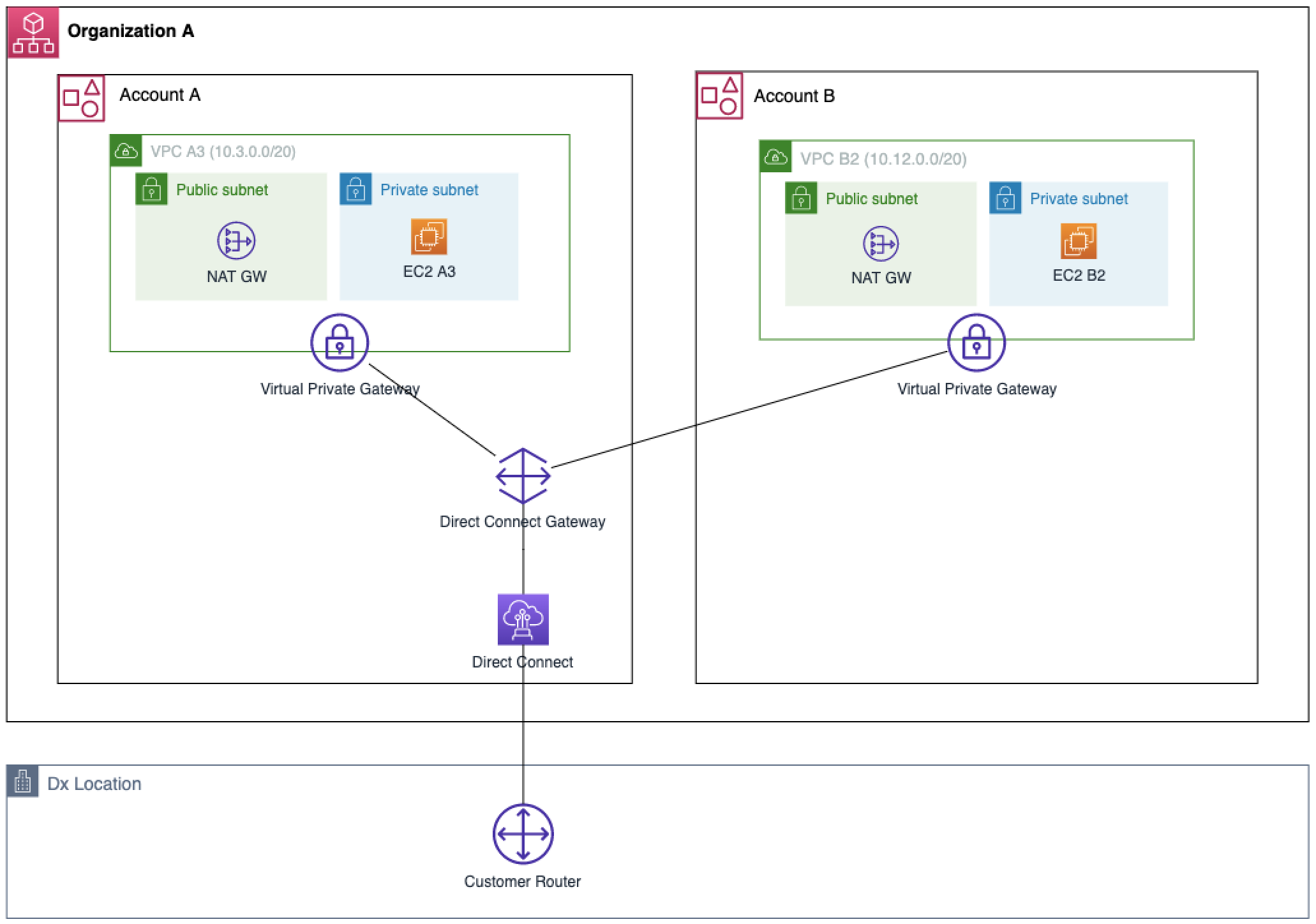 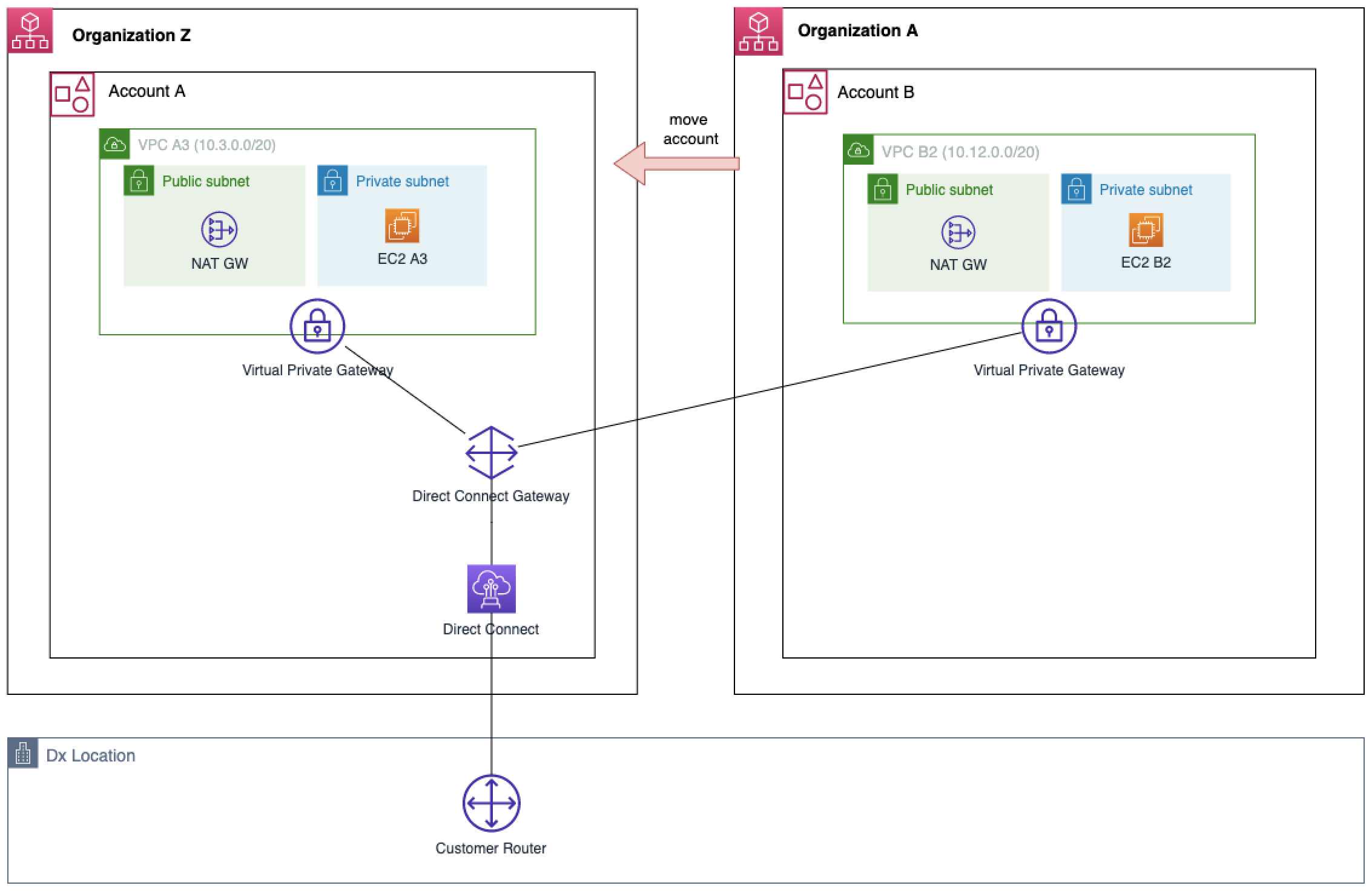 All costs related to the Direct Connect will remain the same. If we refer to the figure above, the cost for the Connection and data transfer out from VPC A3 will be paid by Organization Z’s payer account. However, Organization A’s payer account will keep paying for the cost of data transfer out from VPC B2. Visit Direct Connect pricing for detailed pricing information.

With VPC Sharing, you can share VPC subnets to the other principals within the same Organization. You use AWS RAM to share subnets, and you can share to the entire Organization (by specifying Organization ID), to certain OUs, or to individual accounts from the same Organization. The VPC Owner is the entity that owns and shares the subnets. The account that you shared the VPC with will be known as VPC Participant. If we refer to the following figure, Account A is the VPC Owner while Account B is the VPC Participant.

Figure 9 – VPC Sharing between two accounts in the same Organization

In the example shown in the figure above, Account B as the VPC Participant has Application Load Balancer (ALB) and EC2 instance (named EC2 Shared 1). Here is what will happen to those resources when Account A is moved to Organization Z as shown in the following figure:

Figure 10 – VPC Sharing when Account A moved to Organization Z

The same behavior also applies for the opposite scenario, when Account B is moved to the other Organization.

If you want resources created by VPC Participant to remain active, then it’s recommended that you consider moving both the VPC Owner and VPC Participant account together and share the subnets again as soon as possible to minimize the impact.

There are no changes regarding billing, the VPC Participant account is still responsible for the charges incurred from the resources that they created. In the sample diagram in the figure above, Organization A’s payer account will still be charged for the ALB and EC2 Shared 1.

You can use private hosted zones (PHZ) to store DNS entries for a private domain name that will only be resolved from associated VPCs. We can also share a PHZ to VPCs that belong to the different accounts. The following figure shows the sample configuration when Account A shares its PHZ to Account B. It also shows VPC B1 in the Account B already associated to that PHZ.

Regarding billing, all of the costs related to the private hosted zone will remain the same. Visit the Route 53 Pricing page for more details regarding pricing.

You can share Resolver rules to multiple VPCs (in the same or different accounts). You must use AWS RAM to share the rule to other principals (e.g., single account or Organization). The following figure shows that Account A has Route 53 resolver and shares its Resolver rule to Account B.

To learn about sharing Resolver rules, you can visit this article from AWS Premium Support. 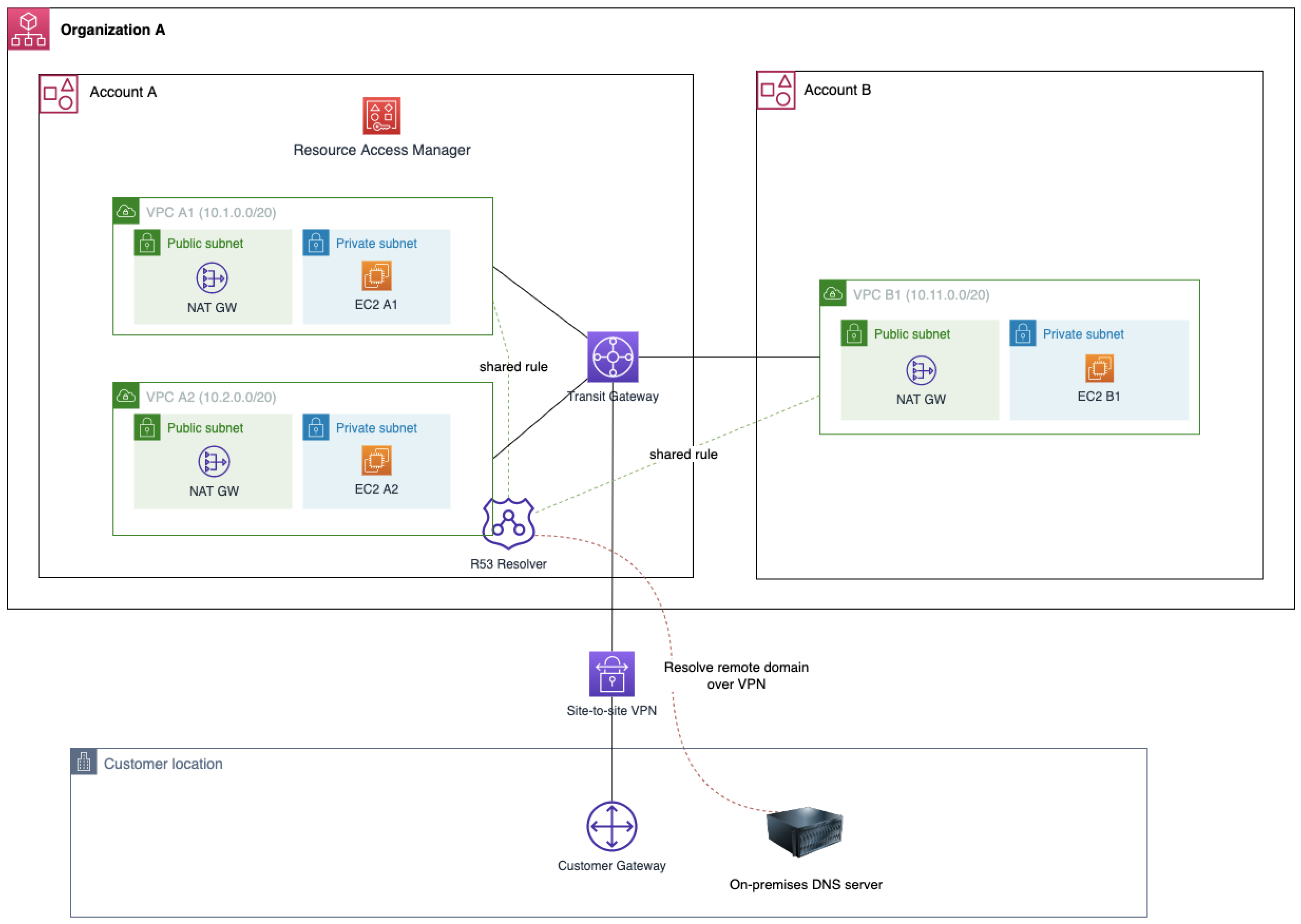 Here’s what will happen when an account that has a Resolver rule leaves an Organization: 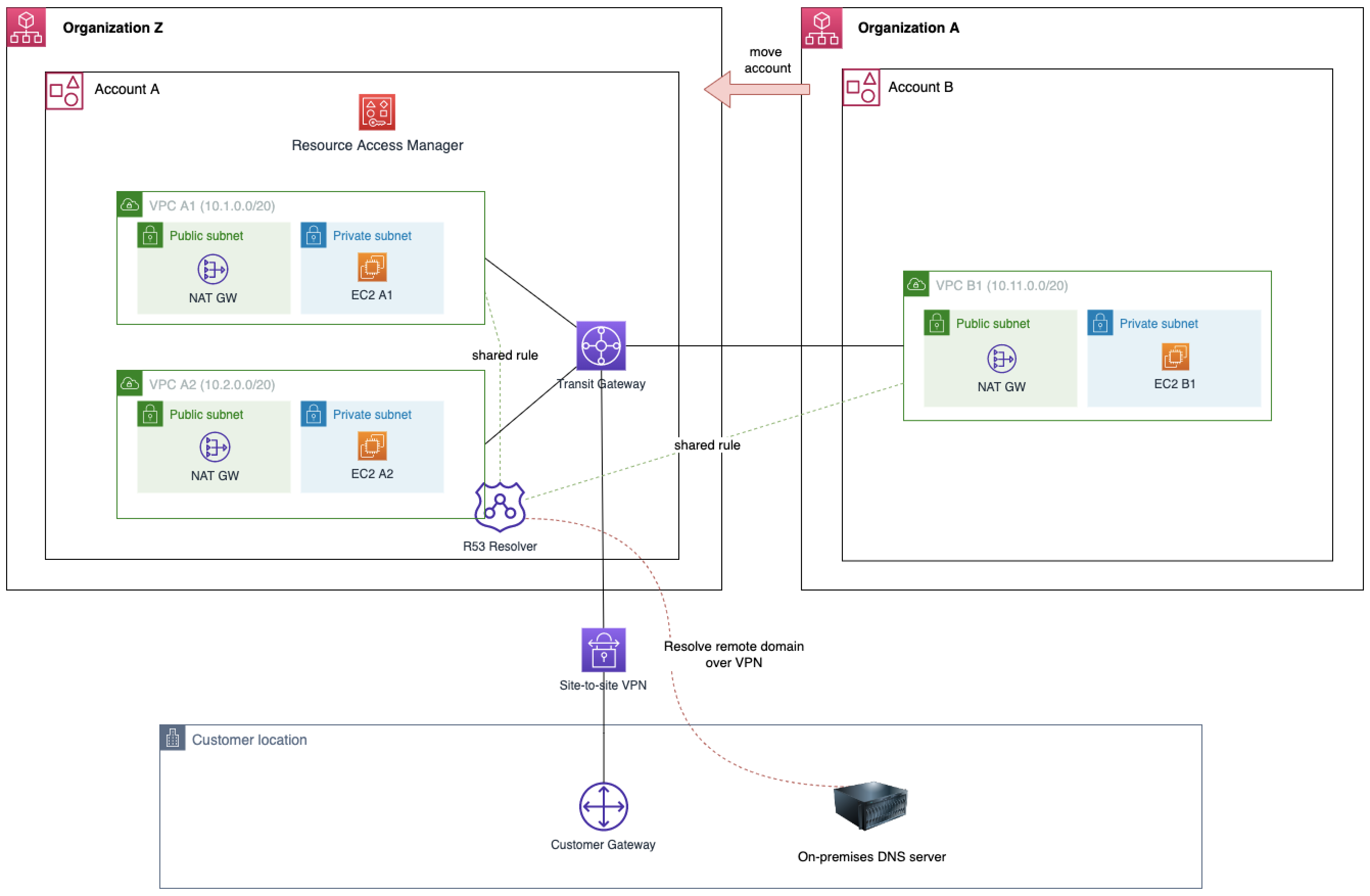 You can explicitly specify Account IDs as the principal prior to a migration. This approach is recommended to keep the rule available when the rule’s owner is moved to another Organization.

For the Inbound endpoint, as long as the remote network still has connectivity to the Inbound Endpoint’s IP addresses, it will remain functional.

All of the cost related to the Route 53 Resolver endpoints and resolver rules will remain the same. Visit the Route 53 Pricing page for detailed pricing information.

If you’re migrating accounts outside of the Organization, then any shared resources that are deployed should be terminated to make sure of no unauthorized access to resources.

Depending on the resources that are provisioned in the account, charges may be incurred during the period after leaving the original Organization and joining another. To learn more about AWS member accounts leaving an Organization, visit removing a member account from your Organization in the documentation.

Tedy is the Senior Solutions Architect at Amazon Web Services (AWS). He works with enterprise customers to build solutions and capabilities that help customers as they move to the cloud. Based in Jakarta, Indonesia, Tedy has over 15 years of experience in IT & Telecommunication business from both principal side as well as end-user enterprise side.