In celebration of Veterans Day, we connected with Marla Bradbury, an Amazon Web Services (AWS) employee, Veteran, and former United States Army pilot. Read on to learn about her military career and what led her to Amazon as well as advice for transitioning military.

Marla, tell us about your military career. 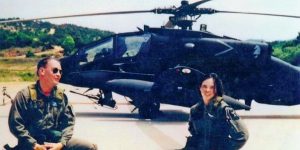 Marla Bradbury (right), in front of an Apache helicopter.

I was a United States Army Apache helicopter pilot, graduating from the aviation program at Fort Rucker, Alabama in the early days as women started into Combat Aviation roles. I began flight school in 1996 just shortly after finishing my undergraduate degree at Boston University where I was also a Distinguished Military Graduate of their Army ROTC program. At Fort Rucker, I trained on OH-58C/TH-67 helicopters for basic, instruments, night, and combat flight before starting the Apache training program. One thing that stands out even today about my experience going through the training is how impressive the instructors of the Apache program are, not only having mastery of the aircraft, flight, and combat aviation but also an innate ability to educate with calm and drive each trainee through the program successfully.

After graduating from the Apache program, I was stationed at Camp Page in Chuncheon, South Korea about 60 miles from the border of North Korea in support of the 2nd Infantry Division. In Korea, I was a Lieutenant and led a platoon of courageous and gifted Warrant Officers, most who had many years more of flight experience than me. Our mission was to essentially be at the ready for any arising need, which may require attack aviation assets. We conducted regular training exercises throughout South Korea, and frequently along the P-518. Looking back, serving in South Korea was one of my favorite assignments because of the amazing flying, the talented aviation leadership (Ret. LTG Anthony Crutchfield), and camaraderie of soldiers, many of whom I still stay in touch with today.

There were numerous assignments after Korea, stateside in Savannah at Hunter Army Airfield in support of the 3rd Infantry Division, back to Fort Rucker for the Captains Career Course, then to Fort Leavenworth for more training (Combined Armed Services and Staff School), Fort Hood in support of the 4th Infantry Division where I was deployed to serve from Soto Cano Air Base in Honduras as a part of counter-drug operations, and then on to Iraq in support of Operation Iraqi Freedom for which I was in theater during 2003.

What made you ultimately decide to pursue a career outside of the military, and how did you come across Amazon/AWS?

I earned an MBA while serving in the military knowing that for me, serving my country and learning how to fly were just two of many boxes I wanted to check on my life journey. As I was transitioning, I connected with the Cameron-Brooks organization, which helps junior military officers (JMOs) find jobs in corporate America. My first job out of the military was as an associate brand marketing manager at the Campbell’s Soup Company in Camden, New Jersey and this bloomed into a career. I met my future husband there (Dan Drummond) who is also a former military officer as well as graduate from the Air Force Academy, and we have two sons together, Lachlan is now 10, and Campbell (yes, named after the company that brought us together) is 11 years old. While raising our family, I worked in various marketing roles over the course of a decade and one day I received a call from an Amazon recruiter, which started a whole new life journey about four years ago. I now lead a team at AWS focusing on state, local government, education, and workforce development marketing. 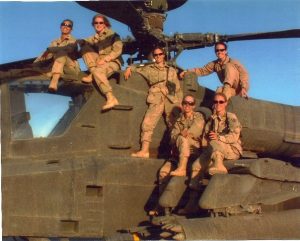 When I was transitioning from the military into corporate America, it became clear to me through both my own personal experience but also as a manager, why companies invest in prior service military: leadership experience! In the military, the stakes are high to accomplish missions on time. The military has zero-tolerance for issues with integrity. And you don’t get to pick your team so you figure out how to collaborate and build a team with who you have, and not doing so can have catastrophic results. So I generally see prior military as they transition into corporate roles index high on Amazon Leadership Principles like Bias for Action, Deliver Results, Earn Trust, and Ownership.

Tell us about your work with AWS Educate? And how can other veterans get involved?

It has been a career highlight to work with the AWS Educate program team where I help lead the marketing efforts. AWS Educate is Amazon’s global initiative to provide students comprehensive resources for building skills in the cloud. It is a no-cost curriculum providing access to content, training, pathways, AWS services, and the AWS Educate Job Board with employment opportunities. In working with the broader AWS Educate team, we’ve expanded the program to include retired military, transitioning military, and their spouses. Members of AWS Educate’s military community receive 50 percent off instructor-led AWS Training to learn in-demand cloud skills in top cloud careers.

You learn so many skills in any role in the military—for other Veterans looking to transition into cloud-based roles, what would your advice be?

The cloud is a growing career field with a substantial number of in-demand, high-paying jobs. LinkedIn ranked cloud computing as a top hard-skill for the last five years by LinkedIn. There are a number of ways to start your journey. Ultimately, it depends on what role you see yourself in within cloud as there are about a dozen different job families. So do your research and talk to people who know about cloud. Take advantage of the AWS Educate program as well as cloud instruction from the AWS Training and Certification team. There is also an AWS Educate Job Board that can help connect prior service U.S. military and their spouses to jobs with a large number of companies throughout the world.

Thank you Marla for your service and for sharing your experience and advice with us!