As organizations scale up their Amazon Web Services (AWS) presence, they are faced with the challenge of administering user identities and controlling access across multiple accounts and Regions. As this presence grows, managing user access to cloud resources such as Amazon Elastic Compute Cloud (Amazon EC2) becomes increasingly complex. AWS Directory Service for Microsoft Active Directory (also known as an AWS Managed Microsoft AD) makes it easier and more cost-effective for you to manage this complexity. AWS Managed Microsoft AD is built on highly available, AWS managed infrastructure. Each directory is deployed across multiple Availability Zones, and monitoring automatically detects and replaces domain controllers that fail. In addition, data replication and automated daily snapshots are configured for you. You don’t have to install software, and AWS handles all patching and software updates. AWS Managed Microsoft AD enables you to leverage your existing on-premises user credentials to access cloud resources such as the AWS Management Console and EC2 instances.

This blog post describes how EC2 resources launched across multiple AWS accounts and Regions can automatically domain-join a centralized AWS Managed Microsoft AD. The solution we describe in this post is implemented for both Windows and Linux instances. Removal of Computer objects from Active Directory upon instance termination is also implemented. The solution uses Amazon DynamoDB to centrally store account and directory information in a central security account. We also provide AWS CloudFormation templates and platform-specific domain join scripts for you to use with AWS Lambda as a quick start solution. 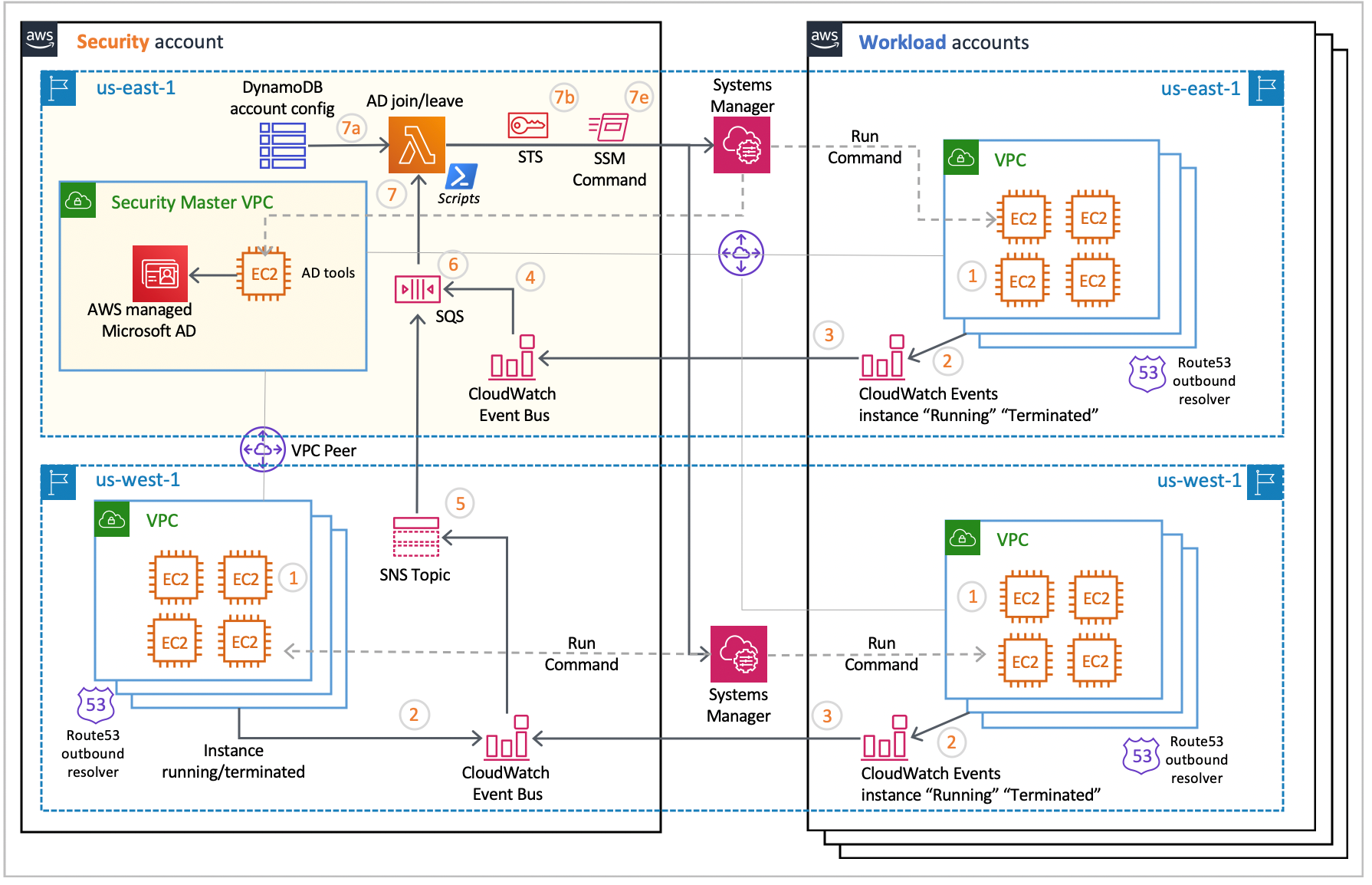 The event flow works as follows:

To build the solution outlined in this post, you need:

The steps in this section deploy AD Join solution components by using the AWS CloudFormation service.

The CloudFormation template provided with this solution (mad_auto_join_leave.json) deploys resources that are identified in the security account’s AWS Region that hosts AWS Managed Microsoft AD (the top left quadrant highlighted in Figure 1). The template deploys a DynamoDB resource with 5 read and 5 write capacity units. This should be adjusted to match your usage. DynamoDB also provides the ability to auto-scale these capacities. You will need to create and deploy additional CloudFormation stacks for cross-account, cross-Region scenarios.

To deploy the solution

The DynamoDB table hosts account-level configurations. Account-specific configuration is required for an instance from a given account to join the Active Directory domain. Each DynamoDB item contains the account-specific configuration shown in the following table. Storing account-level information in the DynamoDB table provides the ability to use multiple AWS Managed Microsoft AD directories and group various accounts accordingly. Additional account configurations can also be stored in this table for implementation of various centralized security services (instance inspection, patch management, and so on).

Following is an example of how you could insert an item (row) in a DynamoDB table for an account.

where itemData.json is as follows.

(Update with your own values as appropriate for your environment.)

adJoinUserName identifies a user with the minimum privileges to do the domain join; you created this user in the prerequisite steps.

adJoinUserPwParam identifies the name of the encrypted Systems Manager parameter that stores the password for the AD Join user. You created this parameter in the prerequisite steps.

After you successfully deploy the solution using the steps in the previous section, the next step is to test the deployed solution.

To test the solution

The AD user used to perform the domain join is a least-privileged user, as described in Delegate Directory Join Privileges for AWS Managed Microsoft AD. The password for this user is passed to instances by way of SSM Run Commands, as described above. The password is visible in the SSM Command history log and in the domain join scripts run on the instance. Alternatively, all script parameters can be read locally on the instance through the “adjoin” encrypted SSM parameter. Refer to the domain join scripts for details of the “adjoin” SSM parameter.

AWS Managed Microsoft AD can be shared with other AWS accounts in the same Region. Learn how to use this feature and seamlessly domain join Microsoft Windows EC2 instances and Linux instances.

Launching EC2 instances with an autoadjoin tag key with a “false” value excludes the instance from the automated Active Directory join process. You might want to do this in scenarios where you want to install additional agent software before or after the Active Directory join process. You can invoke domain join scripts (bash or PowerShell) by using user data or other means. However, you’ll need to reboot the instance and re-run scripts to complete the domain join process.

In this blog post, we demonstrated how you could automate the Active Directory domain join process for EC2 instances to AWS Managed Microsoft AD across multiple accounts and Regions, and also centrally manage this configuration by using AWS DynamoDB. By adopting this model, administrators can centrally manage Active Directory–aware applications and resources across their accounts.