Cisco Meraki customers commonly question how they can extend their SD-WAN environment into an existing Amazon Web Services (AWS) footprint. They desire high availability and a way to automate reachability from their cloud resources down to their local branches.

In this post, we introduce a new AWS Quick Start to help automate the highly available deployment of Meraki vMXs in multiple AWS Regions along with route propagation. Multiple Meraki branch MXs can AutoVPN connect to AWS regional vMX hubs configured in an active/active pair.

All routes learned through AutoVPN are propagated into AWS for seamless connectivity from your branch locations to your AWS workloads in any region. This is accomplished through the newly launched AWS Cloud WAN service, Meraki APIs, and a serverless mechanism for distributing routes without BGP.

Cisco Systems is an AWS Partner that helps customers optimize their cloud strategy by bringing together networking, security, analytics, and management.

Cisco Meraki creates intuitive technologies to optimize IT experiences, secure locations, and seamlessly connect people, places, and things. Founded in 2006 and acquired by Cisco in 2012, Meraki has grown to become an IT industry leader, with over 600,000 customers and 9 million network devices online around the world.

AWS Cloud WAN is a managed wide area networking (WAN) service that makes it easy to build, manage, and monitor a global network that connects resources running across your cloud and on-premises environments. Fundamentally, Cloud WAN provides built-in automated route propagation and segmentation to your AWS WAN network, including: 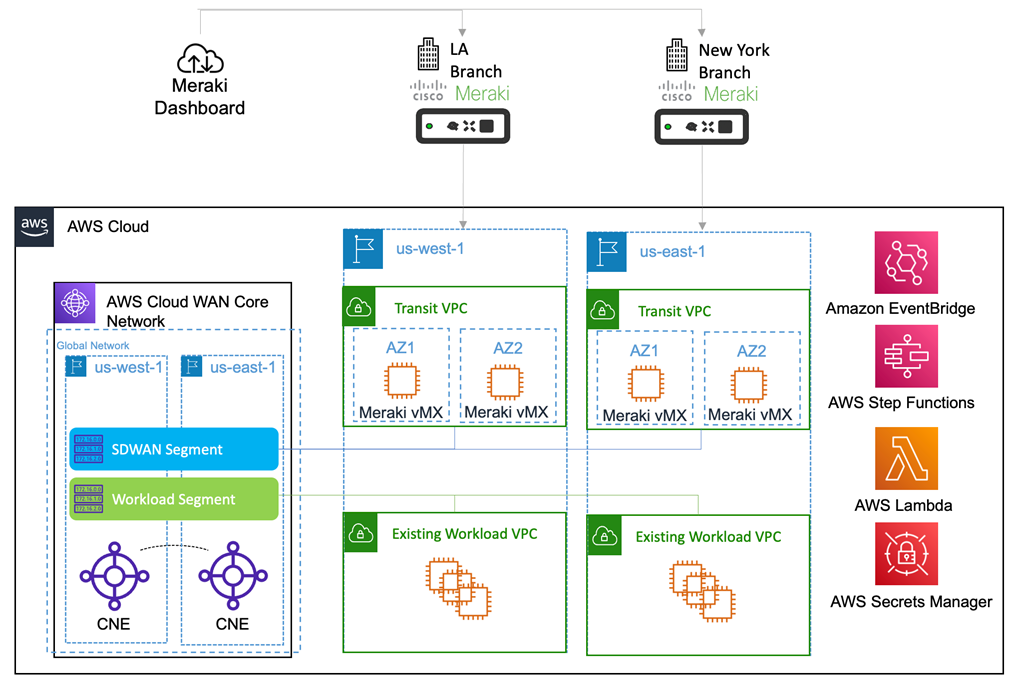 Traditionally, before AWS Cloud WAN was available, customers could utilize AWS Transit Gateway to interconnect workloads across AWS Regions. For example, users can peer a transit gateway in each region and deploy their own custom automation to update the individual transit gateway route tables.

However, Cloud WAN is considered a managed WAN because it provides this route propagation out of the box. To see the original vMX solution built out with Transit Gateway, read this Quick Start.

As shown in Figure 2, the Quick Start is divided into the following two types of AWS CloudFormation templates: 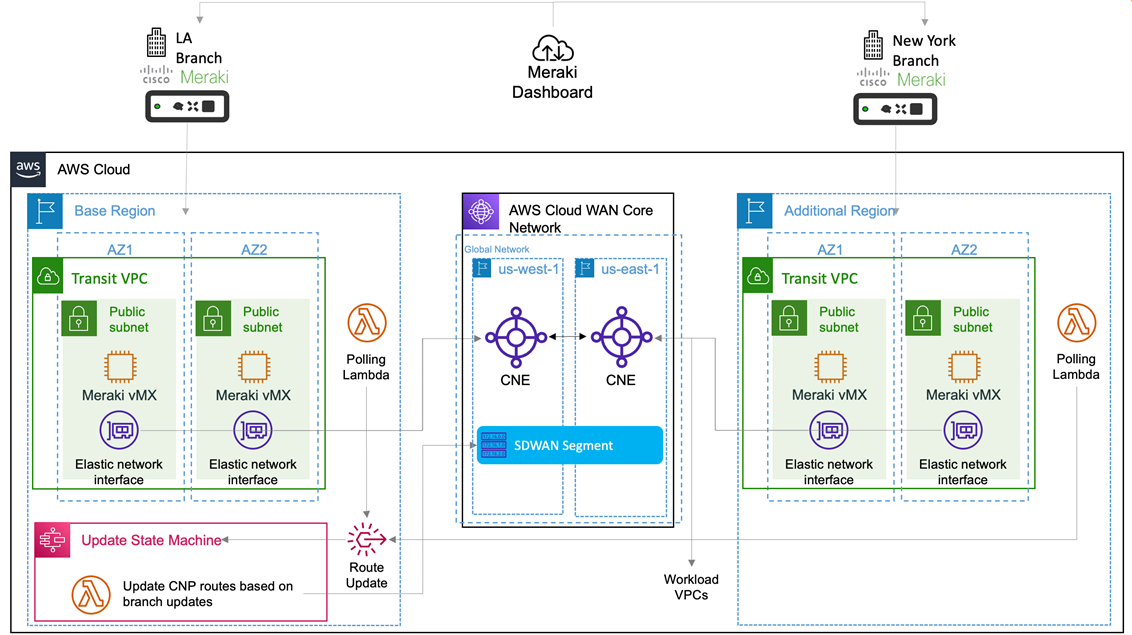 With AWS Cloud WAN, it is now possible to use BGP to create an underlay where routes are synced end-to-end from local branches to remote AWS Regions. However, where BGP is not an option, it is still possible to sync routes end-to-end using AWS Serverless components. The diagram in Figure 3 shows an example network with two customer branch networks with MX appliances connected to a transit VPC in us-east-1 region with AWS workloads spread across two separate regions.

As shown in Figure 3 above:

The Quick Start solution enables dynamic route propagation for all branch routes that are added or removed from your Meraki SD-WAN network. In Figure 4, these routes are colored green. This includes all the branch routes being provisioned into Cloud WAN, as well as the VPC. The rest of the static routes needed are provided manually, but only needed a single time upon creation.

The following AWS services enable end-to-end route automation and orchestration without the need to deploy any servers:

Why Step Functions Instead of Lambdas?

With Cloud WAN being a global service, it can take additional minutes to propagate and sync the routes across regions. With Lambda charged by the millisecond, it is more economical to create a state machine that can execute the API and poll periodically for completion.

Another benefit of Step Functions is that it allows for additional logic to check if any other Core Network Policy (CNP) versions are currently being executed and handle race conditions where two separate regions request route updates at the same time.

Figure 5 walks through the update process that is taken by both the polling lambda and the update state machine. Each process is decoupled and event-driven using EventBridge. 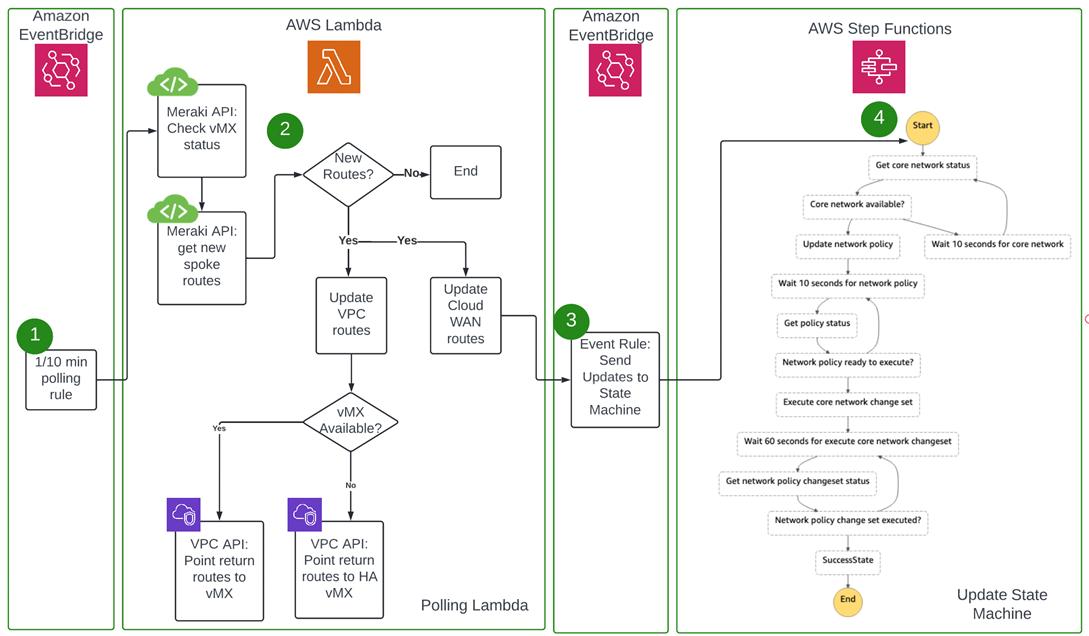 In this post, we discussed how Cisco Meraki customers can use an AWS Quick Start to help automate the highly available deployment of Meraki vMXs in multiple AWS Regions along with route propagation.

Cisco is an AWS Partner providing a range of products for transporting data, voice, and video within buildings, across campuses, and around the world.