Editor’s Note: This post has been updated following announcements at AWS re:Invent 2018. 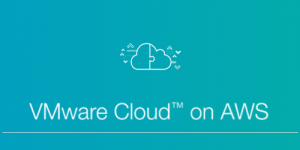 VMware Cloud on AWS enables customers to have a hybrid cloud platform by running their VMware workloads in the cloud while having seamless connectivity to on-premises and Amazon Web Services (AWS) native services.

In this post, we dive deep into SDDC networking and how it connects to different local and remote customer networks. We also explore options for connecting from your SDDC to Amazon Virtual Private Cloud (Amazon VPC), on-premises networks, and multiple VPCs.

With the SDDC deployed on AWS bare metal hardware provided by Amazon Elastic Compute Cloud (Amazon EC2), the lowest network level to start with is the Amazon EC2 underlay network or the Infrastructure Subnet. This network hosts the vmkernal adapters of the ESXi hosts like vMotion, vSAN, and host management networks.

VMware uses NSX to control access to this network as part of the SDDC management model, and limits access to only remote traffic required to support features like cross-cluster vMotion.

Figure 1 – Networking and security overview in the VMware Cloud on AWS portal. 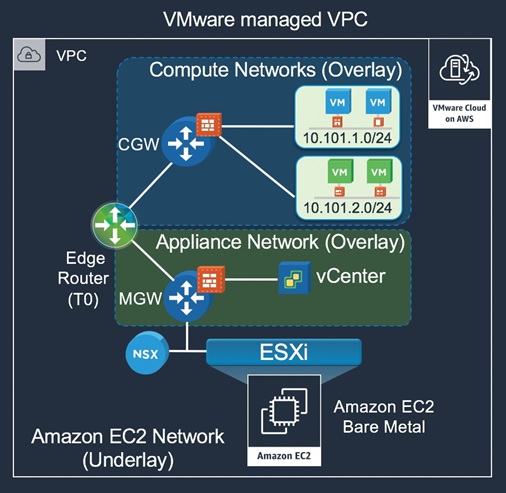 Customers will also run an AWS CloudFormation template, which grants VMware Cloud Management Services across account roles with a managed policy. This managed policy allows VMware to perform operations like creating Elastic Network Interfaces (ENIs) and route tables. A detailed description of what the policy allows can be seen in the AWS IAM Console under AWS Managed Policies. The policy’s Amazon Resource Name (ARN) is arn:aws:iam::aws:policy/AmazonVPCCrossAccountNetworkInterfaceOperations.

Once the role has been created and assigned, VMware Cloud Management Services assumes a role in the customer account and creates ENIs in the subnet the customer chooses. These ENIs are directly attached to the ESXi hosts in the VMware SDDC account.

Of all the attached ENIs, only one of them is in use. The NSX edge Router (also called T0 Router) lives on a single ESXi host, and this decides the ENI that’s in active state. This ENI allows for connectivity between the SDDC cluster and customer VPC. In the event of a host failure, VMware vMotions the Compute Gateway to a new host and the customer route table is updated to point to the new active ENI. Customers will be able to see these ENIs in their account with a description set to ‘VMware VMC Interface.’

Customers can view details about the connected account from their VMware Cloud on AWS console. Connectivity between the SDDC and VPC will not incur any data egress costs if the ENI created for this service and SDDC are in the same Availability Zones (AZs). If they are in different AZs, you will incur standard data transfer charges. 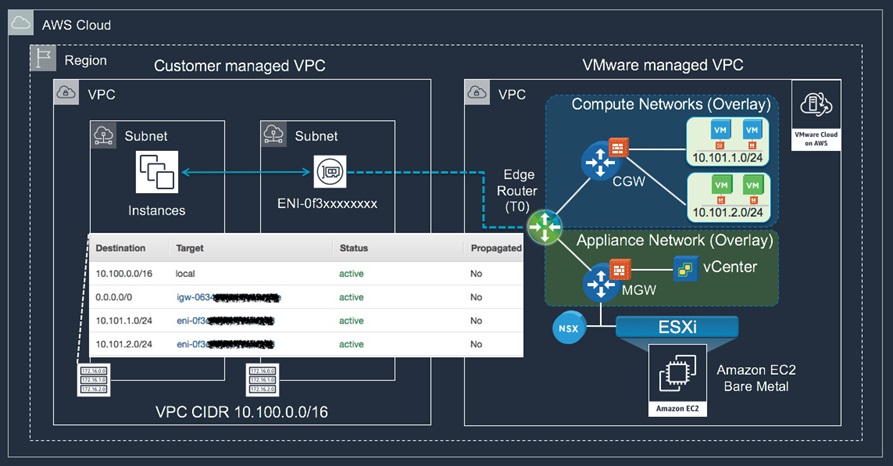 Connectivity to Other Customer VPCs

There are three primary approaches to enable connectivity between SDDCs and customer-managed VPCs (other than the connected VPC where VMware cloud ENIs are provisioned). Choosing the right approach depends on the number of VPCs you will need to connect to and requirements for additional networking services on traffic flow.

Before we get into these options, we need to mention that the new NSX-T backed SDDCs support both BGP route-based and static policy-based VPNs. Our recommendation is to always use route-based VPNs unless if not supported on the other end of the connection. We’ll focus on route-based VPN practices in this blog.

The first approach is to create 1:1 VPN tunnels between the NSX T0 edge router and the different VPCs using the AWS-managed VPN offering (or any Amazon EC2 based VPN, if preferred). To maintain connection resiliency, it’s important to configure both IPSec tunnels provided by the AWS-managed VPN to the edge router. AWS will use BGP to influence the selection of the active tunnel on both sides and failover as necessary.

The T0 edge router is highly available by design through active/stand configuration, so it will not be a single point of failure for the connection. This model works well when connectivity is required to small or limited number of VPCs. 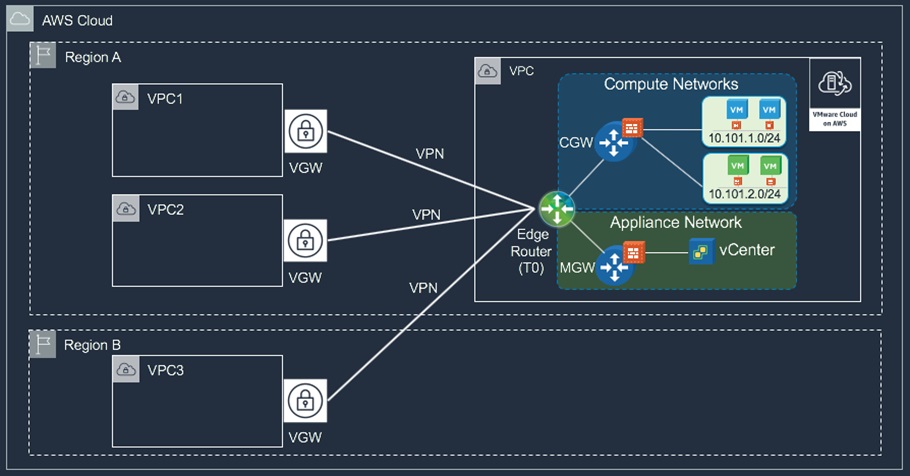 If connectivity is required to multiple VPCs, a different solution using the recently announced AWS Transit Gateway can be used to minimize the number of tunnels and provide simplified hub and spoke routing model for SDDC to SDDC, VPC, and on-premises environments. 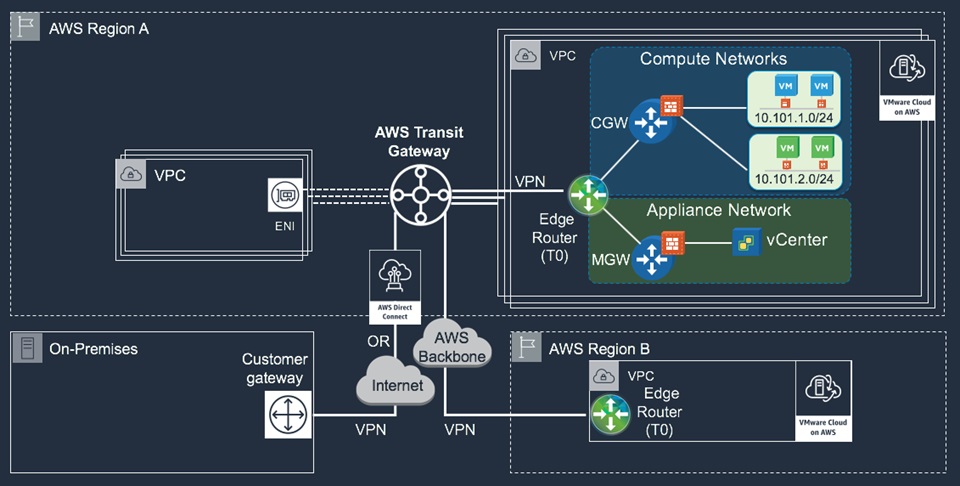 AWS Transit Gateway (TGW) is highly scalable and resilient. It supports multiple Routing Domains for granular routing and network segregation similar to VRF functionality. TGW can have up to 5,000 attachments per Region, and can burst up to 50Gbps of traffic per VPC attachment. It supports route-based VPNs with Equal-Cost Multi-Path (EMCP) to increase VPN bandwidth by equal traffic distribution across multiple tunnels when advertise the same CIDR block. Native Direct Connect support is coming early 2019.

In cases when additional network services, like traffic inspection or IPS/IDS is needed, the Transit VPC approach can still be used. This model suggests the use of third-party software VPN on Amazon EC2 inside a shared/transit VPC. The software router on Amazon EC2 works as a hub that terminates tunnels to the different environments, or spokes. Routing and additional networking capabilities will be provided by the software router based on the software vendor capabilities. 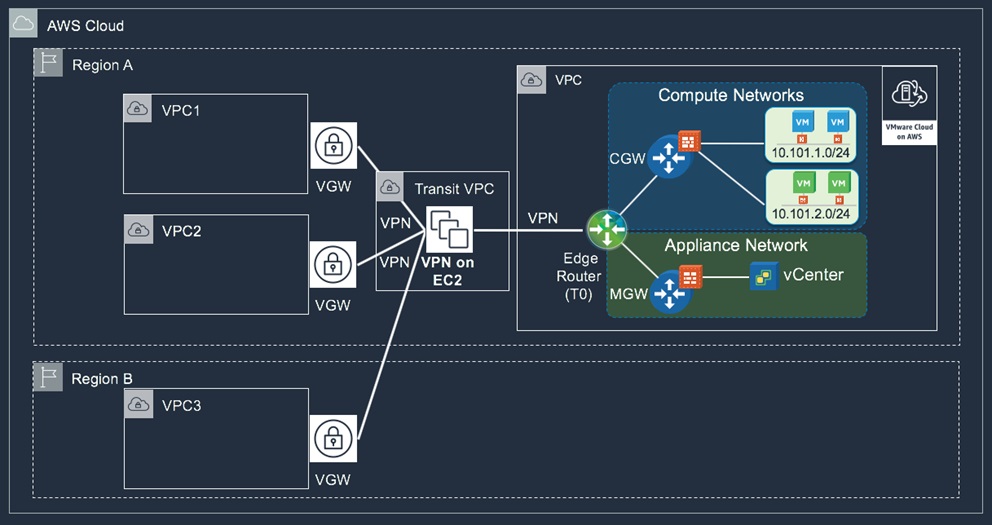 The new VMware Cloud on AWS SDDCs backed by NSX-T networking provides full routing support for Infrastructure (underlay) and overlay networks over a single Virtual Private Interface. This model simplifies the routing requirements between SDDC and on-premises environments using BGP routing without the need for VPN tunnels, unless if encryption is required.

In cases when encryption is required for some or all network communication to on-premises, SDDC supports the option to either use the public or private address of the T0 edge router when creating VPN connections. This gives customers flexibility on how to route their VPN traffic over Direct Connect:

Let’s take data center extension as one common use case and touch on how to meet networking requirements for vMotion with AWS Direct Connect today.

One of the most popular and core features of VMware vSphere is vMotion—the ability to live migrate workloads from one physical host to another with no downtime. vMotion capability was later extended to support cross-cluster, cross-vCenter, and long-distance live migrations. These features pushed infrastructure capabilities to its limits to support and maintain reliable migration operations. 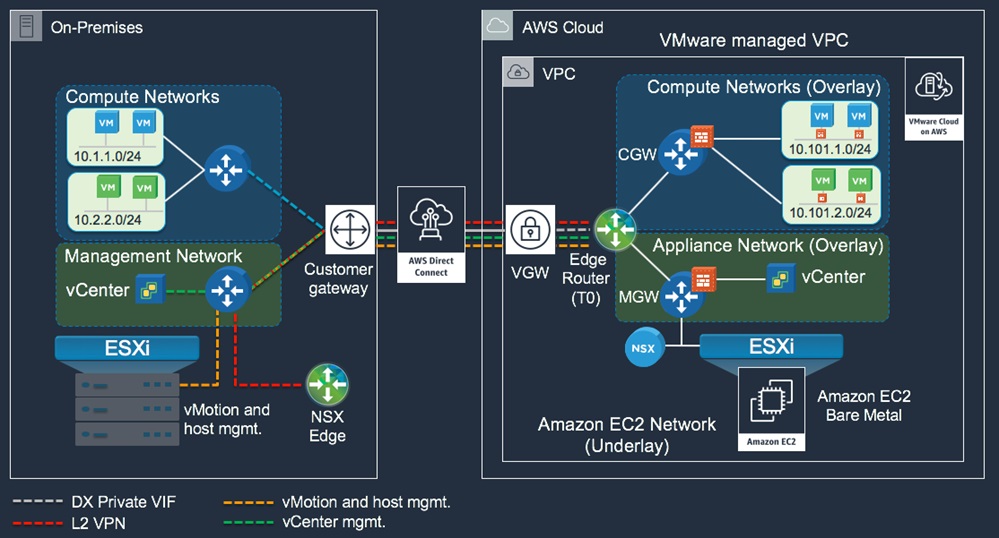 Figure 8 – Network requirements for vMotion between on-premises and SDDC.

SDDC customers who need to connect to multiple VPCs can create tunnels over AWS backbone using an AWS-managed VPN with multiple options based on SDDC logical networks and connectivity requirements.

If you would like to see how VMware Cloud on AWS can help transform your business, please contact VMware >>