Mainframes continue to support major applications in many enterprises, running the software that is core to their business.

With age have come fixes, bolt-ons, and spaghetti architecture, but some businesses believe replacing the mainframe with a new one or totally rewriting applications is too expensive for their budgets.

The good news is that replatforming with TmaxSoft OpenFrame, TmaxSoft Tibero, and Amazon Web Services (AWS) is a cost-effective solution to aging mainframes. In this post, we describe the replatforming components, why the combined solution is unique, and best practices for implementation.

The migration starts with a source code analysis by a tool developed by TmaxSoft called OFMiner that sets the stage. TmaxSoft’s advanced automated migration tools move the code to a distributed environment.

Application source code is recompiled in the AWS environment using OpenFrame compilers. There are minimal to no code changes required to the application code during recompilation. Business logic remains the same while the data is being modernized to ASCII character-set, which is more portable than the EBCDIC character-set.

OpenFrame has a unique value proposition with strong technical features: 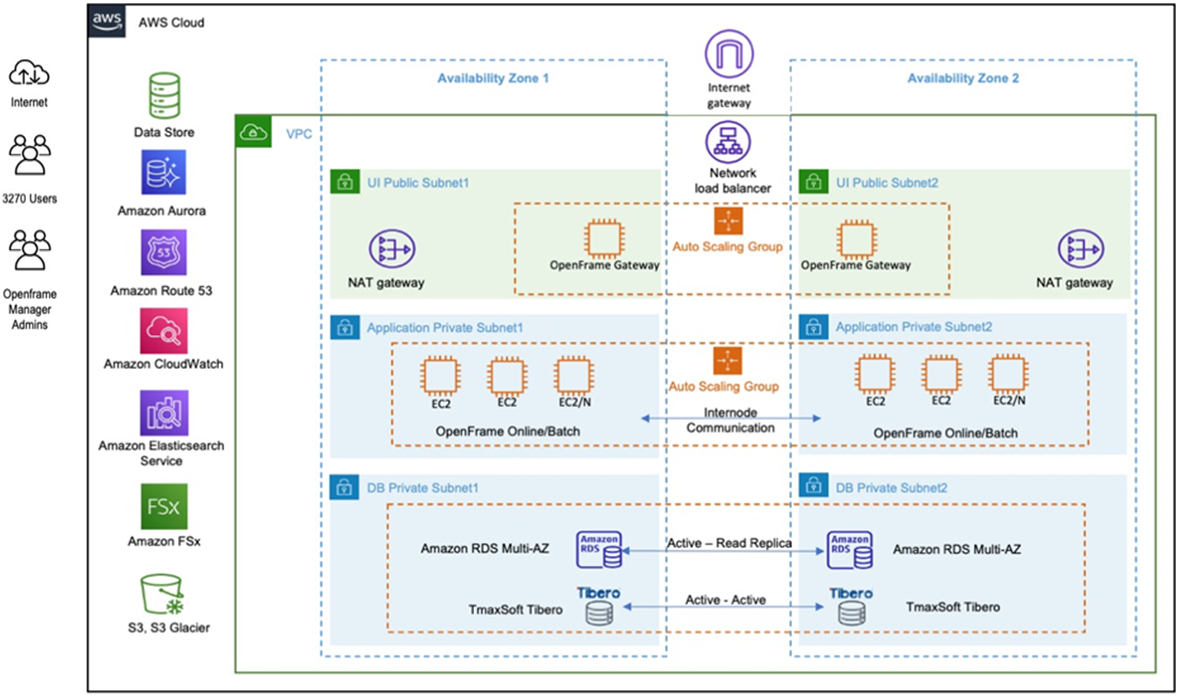 Following these best practices facilitates the migration of programs and data from mainframe to OpenFrame, and allows customers to choose from a wide range of target RDBMS such as Tibero, Aurora, DB2 LUW, Oracle, and Tibero.

Once it has assessed the current mainframe environment and its applications, TmaxSoft provides a detailed report that includes an estimate of TmaxSoft license pricing and maintenance, a list of any third-party software that may be required, an overview of any identified risks or gaps in functionality, recommended target hardware/cloud specifications, inbound-outbound interfaces analysis.

The report includes expected benefits and an estimate of the project duration that includes details on tasks and roles and responsibilities as well. The report also gives the recommended target hardware/cloud specifications and an AWS design and infrastructure estimate for the services that would be required, such as a computing instance (Amazon EC2), elastic load balancer, and more.

The assessment process identifies any unused source code (programs, JCLs, PROCSs) which helps you narrow down migration and reduce the time and effort to replatform.

At a large financial services company, TmaxSoft found that almost 50 million lines of code were not actively used in the application being replatformed, which in turn helped narrow down the scope and reduce the migration and testing time.

Prepare the Open System and Migrate Your Resources

Don’t migrate everything all at once. Instead, choose one mainframe application and data at first conversion as a pilot. Bring the remaining systems and databases over after you have identified any system anomalies.

After the migration, run tests on a pre-production environment to see how well everything performs by staging use of the new system and databases by departments or functions. Once on the target environment, test one or two production monthly cycles to validate results and measure performance.

The flexibility of AWS allows you to launch, scale-in, scale-out, and shut down instances until you reach the expected performance metrics. You should not turn off the old system right away; instead, wait a for a comfortable period—this will vary—to make sure everything is operating to expectations.

During this time, data is synchronized between the old and new environments on a daily basis, allowing to switch over to the new environment completely.

Your customers and employees expect a fast, personalized experience that resembles what they get on mainframe 3270 terminals. Replatforming delivers this expectation on several levels.

TmaxSoft OpenFrame increases agility and flexibility, enabling you to configure active clustering on your AWS environment. This serves as the foundation for the highly available and scalable solution in this always-on world.

Replatforming creates an environment that can scale with AWS resources based on business demand. It can also unlock the value of your mainframe apps by exposing them to web services for mobile and digital applications, transforming the customer experience.

For more detailed information about OpenFrame visit the TmaxSoft website.