It’s never been less expensive to move to Amazon Web Services (AWS), and new research from TSO Logic shows AWS prices keep getting lower. The more resources you move to the AWS Cloud, and the longer you keep them there, the more value you can expect.

TSO Logic is an AWS Partner Network (APN) Advanced Technology Partner with the AWS Migration Competency. In this post, we’ll take you inside the research TSO Logic conducted to quantify year-over-year cost declines of AWS services—the first study of its kind to put actual numbers behind the trend.

You’ll find out who TSO Logic is and why more businesses are using our analytics platform to optimize their business case for cloud. Lastly, we’ll share a use case to illustrate what the combination of TSO Logic analytics and AWS cost savings can mean for real-world customers.

If you’ve been paying attention to the cloud marketplace, you probably have a general sense that prices keep dropping. In fact, AWS has reduced prices 67 times since AWS launched in 2006.

It can be easy to dismiss advertised price drops as marketing hype, but at TSO Logic we decided to find out what those ostensibly lower prices mean when applied to real-world enterprise workloads. And we were in the perfect position to do it—that’s what our company is all about, after all.

The TSO Logic analytics platform helps customers discover the true costs of their current compute and storage environment. It’s designed to automatically identify low-cost options for each workload on the cloud, accounting for the huge diversity of options in the AWS Service Catalog and factoring in software license mobility.

Typically, TSO Logic customers use predictive analytics to build and validate their cloud business case. But there’s no reason the platform can’t look backwards as well, and that’s exactly what we did.

We looked at actual compute and storage provisioning, software license types, and utilization levels across an anonymized data set of enterprise servers. We then ran those findings through our predictive analytics engine to compare current and historical AWS pricing catalogs going back several years.

The results: the workloads our clients were running in 2017 cost up to 73 percent less than it would have cost to run them in 2014.

The table in Figure 1 illustrates the cost of running 100,000 workloads on AWS in 2014 with the costs of running like-for-like workloads—those with the same compute and usage patterns—over the following three years. We skipped cloud server products introduced later, which couldn’t be matched to identical instances from previous years.

The analysis also calculates cost savings when using like-for-like payment models, as well as the added benefit of using Amazon EC2 Reserved Instances, which were not available until 2016. The results speak for themselves.

Based on these numbers, AWS has been offering customers more cloud for their money every year. But with AWS’ recently announced Optimize CPUs for Amazon EC2 Instances feature, customers can save even more moving forward. By thinking carefully about core count, you can now unlock software license savings that potentially dwarf those infrastructure savings.

The ability to specify a custom number of virtual central processing units (vCPUs) will be a huge deal for many AWS customers running database workloads like Oracle and SQL Server on Amazon Elastic Compute Cloud (Amazon EC2) instances, since those applications are licensed on a per-core basis.

Previously, AWS offered only fixed Amazon EC2 core count and memory configurations. This was not ideal for customers who wanted high memory, storage, and I/O bandwidth, but didn’t need a high vCPU count. If your SQL Server instance required large amounts of RAM, for example, you had to buy a larger number of cores—even if the workload didn’t actually need them. Those extra cores translated to a much higher price tag. 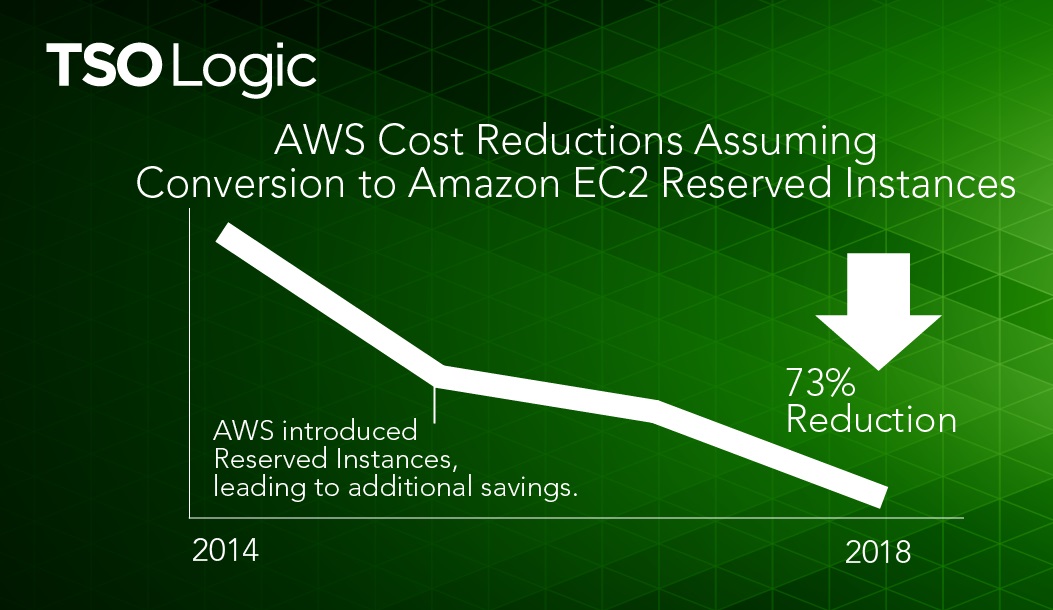 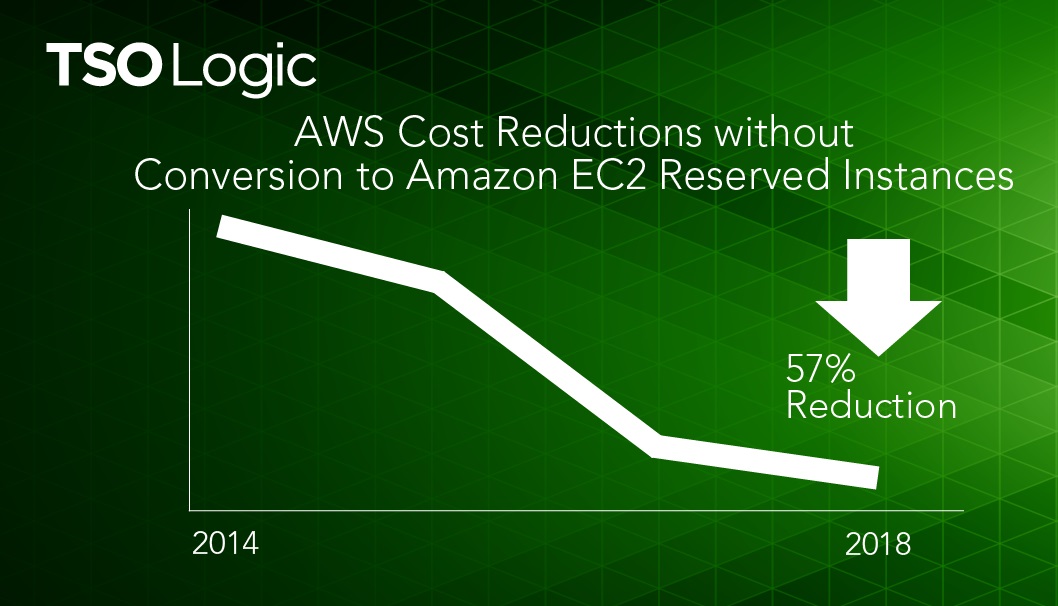 Figure 2 – TSO Logic calculated cost savings when using like-for-like payment models, as well as the added benefit of using Amazon EC2 Reserved Instances, which were not available until 2016.

Let’s put some real numbers behind these savings. One TSO Logic customer was using 1,356 licensed cores of SQL Server on-premises and wanted to bring their SQL license to AWS. Previously, they would have had to use 2,220 cores (63 percent more) on AWS to meet their memory needs.

Considering the list price for Microsoft SQL Server is $14,000 per core, that fixed core count requirement would have meant a huge spike in licensing costs—effectively making cloud a nonstarter for this workload.

Now, customers can keep the same memory, storage, and bandwidth of the full-size instance they need. They can also run SQL Server on AWS with just 1,272 cores—7 percent fewer than they’re currently using on-premises. Running on AWS with 84 fewer cores translates to a significant price drop over this customer’s current environment.

More importantly, the core count flexibility means the AWS Cloud is now a viable option for their SQL Server. They can bring their existing license and start realizing all the other designed benefits of the AWS Cloud.

With the ability to define core counts at a granular level, along with the trend of steady year-to-year declines in AWS prices, the AWS Cloud really is more economical than ever. If you’ve been considering moving your Microsoft workloads to AWS but thought it wouldn’t be cost-effective, it’s time to look again.

Of course, selecting the right AWS options to maximize savings is critically important. To capitalize on continuous improvements in processing power and instance size price cuts, you can’t just migrate once and never think about it again. You have to continually identify the best and most cost-effective instance type for job.

To maximize your software license savings, you have to know which of your existing licenses can move, as well as the best instance type and configuration to move to.

You won’t find those answers on a spreadsheet. The AWS Service Catalog offers many choices, with many fine-grained nuances to consider—any one of which could potentially make or break your cloud business case. That’s where TSO Logic comes in. We’re an AWS Migration Competency Partner and can help customers quickly build data-backed business cases for cloud.

The TSO Logic analytics platform ingests millions of data points from your current environment to show how much you’re spending to run each workload, where you’re overprovisioned, which current software licenses can move to AWS, and more.

By replacing guesswork with algorithmic analysis, you gain a clear blueprint, including costing, to quickly build and validate your cloud business case. On average, our customers realize validated cost savings of 30 percent or more by optimizing infrastructure alone. By using our platform to optimize software licenses and core counts, they’re seeing up to 80 percent savings.

To illustrate what these data-driven insights can mean in practice, let’s walk through an anonymized use case from a real-world TSO Logic and AWS customer. This is a privately-held U.S. company with more than 70,000 employees, operating in 50 countries.

Company leaders wanted to use the cloud to help them innovate faster and expand the company’s global presence. They aimed to close five of their six datacenters by 2020 and shift those resources to AWS. To convince their global leadership team, they needed a data-driven, cost-optimized business case. Getting there was far from straightforward.

First, the team had to contend with the massive scale of the environment: six datacenters, nearly 8,000 physical and virtual machines, and more than 3.2 petabytes of storage. In forecasting future costs, they also had to wrestle with extraordinary complexity, including changing workload patterns, complex software licensing rules, and a vast number of possible future-state configurations on AWS.

There was simply no way to build an accurate business case using any kind of static analysis. So, they brought in TSO Logic.

Our agentless data collector was set up in less than two hours, and we began feeding it data from their existing monitoring tools. Our platform then analyzed their server, storage, application usage, and applied software licenses. Here’s what we found:

Want to see how much savings TSO Logic can help you identify for your AWS migration? Visit www.tsologic.com/aws or contact us today.

If you plan to attend one of the upcoming AWS Transformation Day events, stop by our booth for a demo.

TSO Logic is an AWS Competency Partner. Their patented discovery and algorithmic analysis platform quickly discovers compute, software, and storage across your environment.