One of the most common needs we have heard from customers in Autonomous Vehicle (AV) development, is to launch a hybrid deployment environment at scale. As vehicle fleets are deployed across the globe, they are capturing real-time telemetry and sensory data. A data lake is created to process the data, and then iterating that dataset improves machine learning models for L3+ development. These datasets can include 4K60Hz camera video captures, LIDAR, RADAR and car telemetry data. The first step is to create the data gravity on which the compute and labeling portions will operate.

In this blog, we explain how to build the components in the following architecture, which takes an input dataset of 4K camera data, and performs event-driven video processing. This also includes anonymizing the dataset with face and license plate blurring using AWS Batch.

The output is a cleaned dataset which is processed in an Amazon SageMaker Ground Truth workflow. You can visualize the results in a SageMaker Jupyter notebook.

You can transfer data from on-premises to AWS with both online transfer using  AWS Storage Gateway, AWS Transfer Family, or AWS DataSync via AWS DirectConnect, as well as offline using AWS Snowball. Whether you use an online or offline approach, a fully automated processing workflow can still be initiated.

Description of the Dataset

The dataset we acquired was a driving sample in the N. Virginia/Washington DC metro area, as shown in the following map. 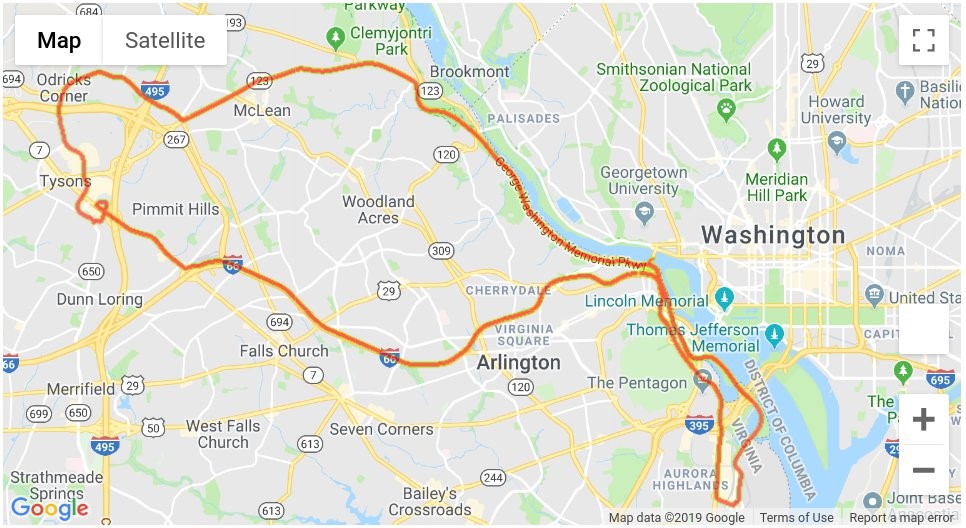 Figure 2 – Map of the area in which the driving sample was taken.

This path was chosen because of several different driving patterns including city, suburban, highway and unique driving characteristics.

We walk you through the process for the video processing workflow and manifest creation. 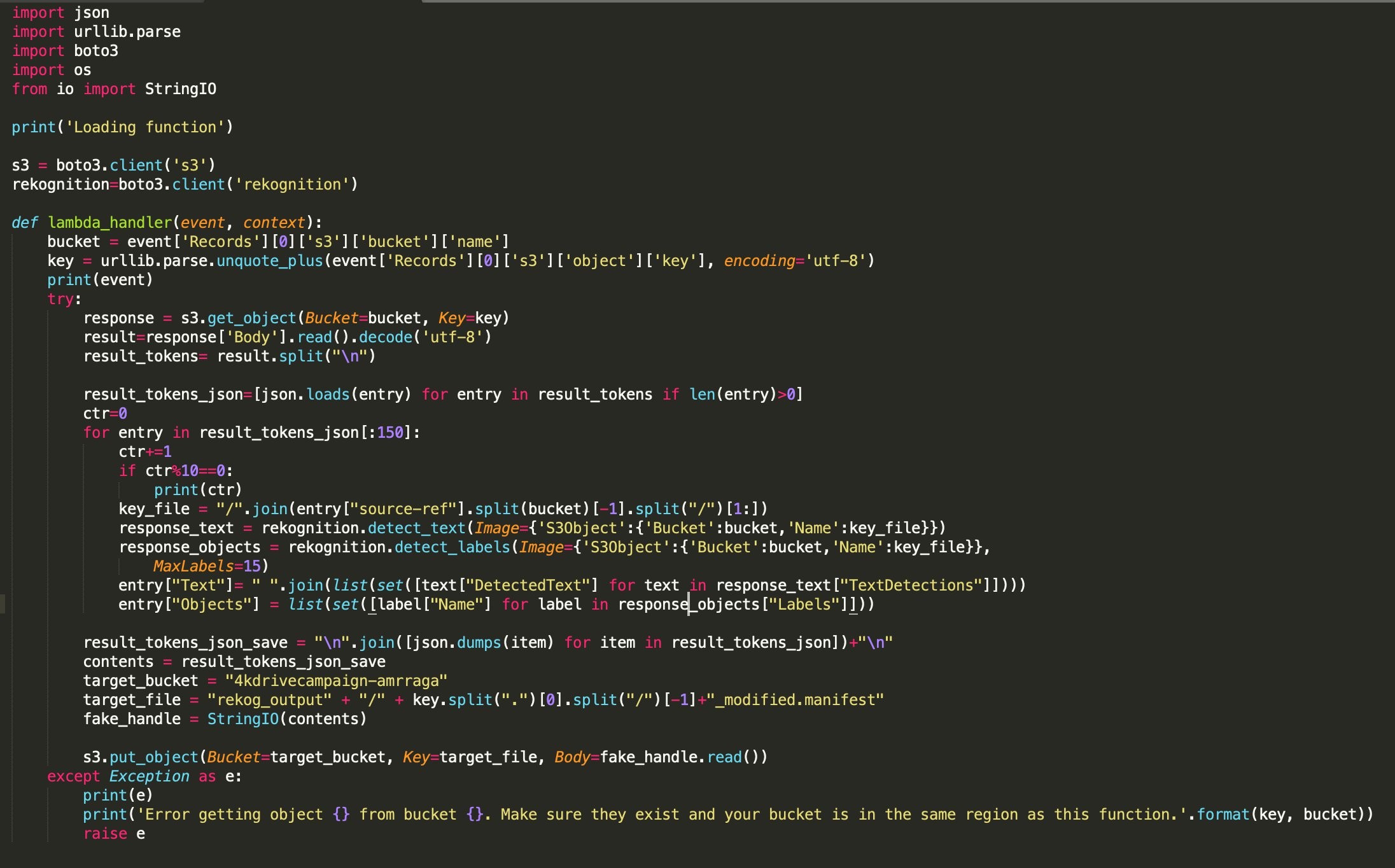 Before starting the analysis, let’s create some helper functions using the following code: 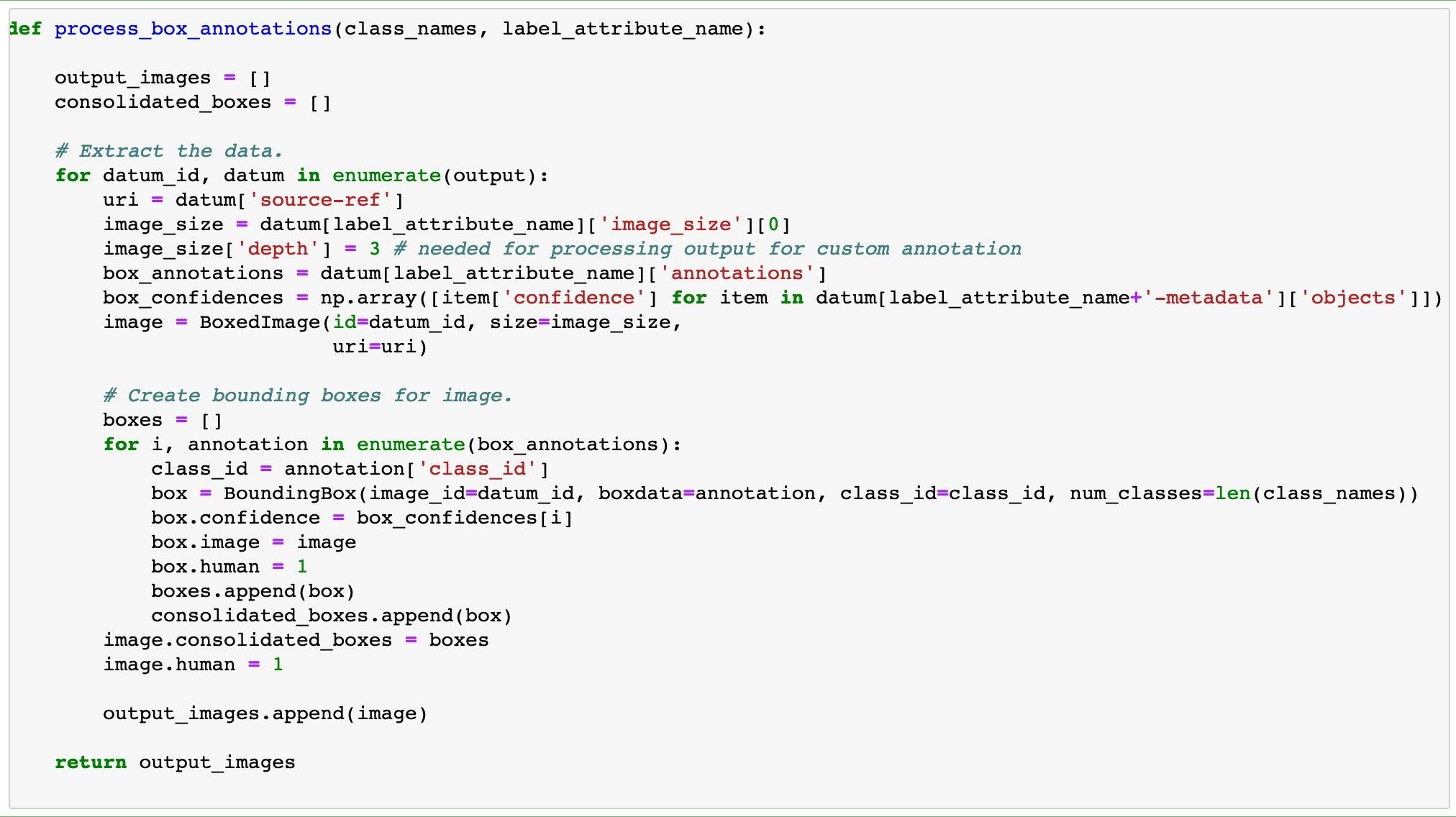 First, let’s compute some summary statistics for a set of labeling jobs. For example, we might want to make a high-level comparison between two labeling jobs performed with different settings. Here, we’ll calculate the number of annotations and the mean confidence score for two jobs. We know that the first job was run with three workers per task, and the second was run with five workers per task. 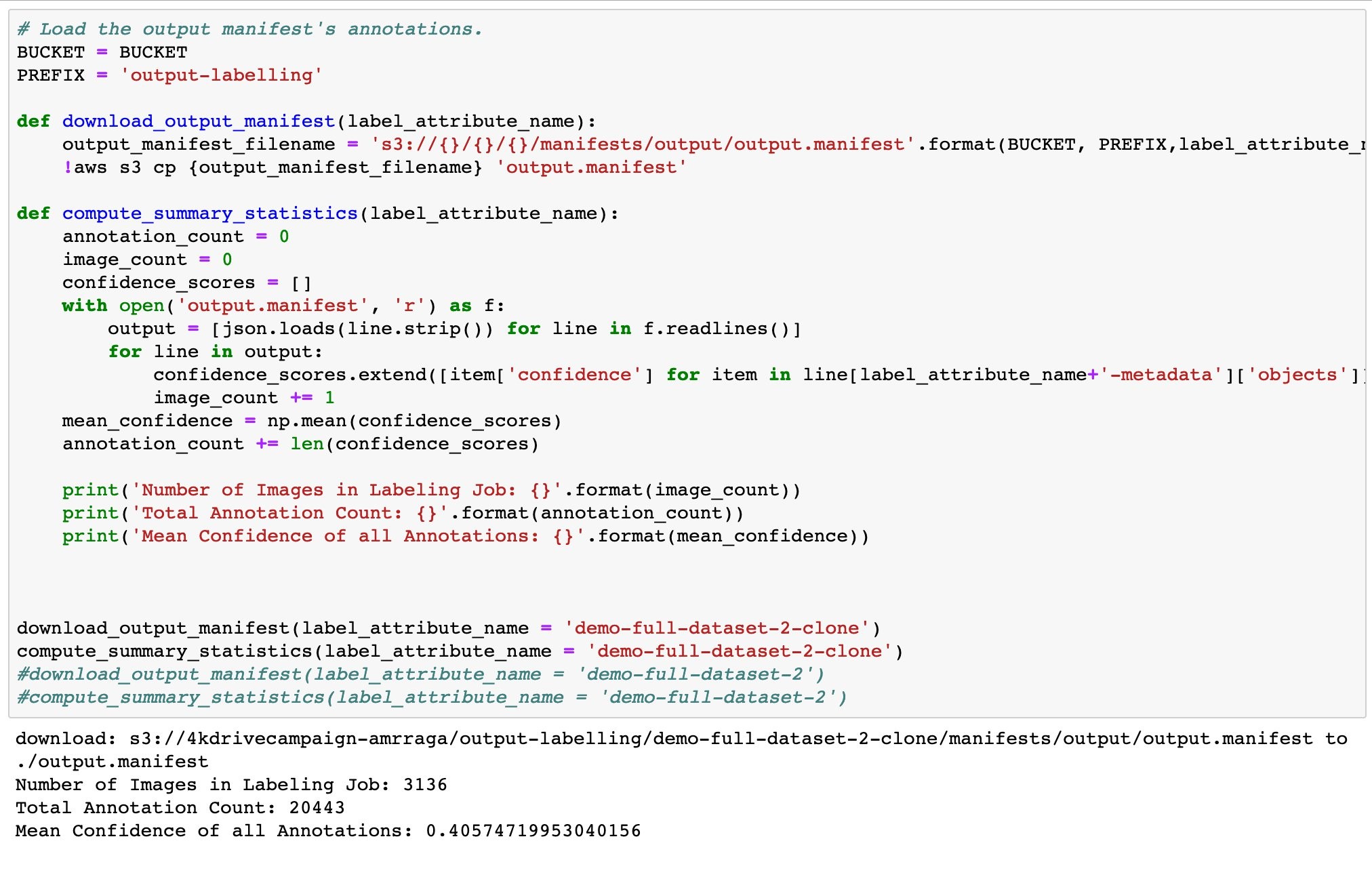 We can determine that the mean confidence of the whole job was 40%. Now, let us do the querying on the dataN.

Objective: All images with at least 5 cars annotations with confidence score of at least 80%. 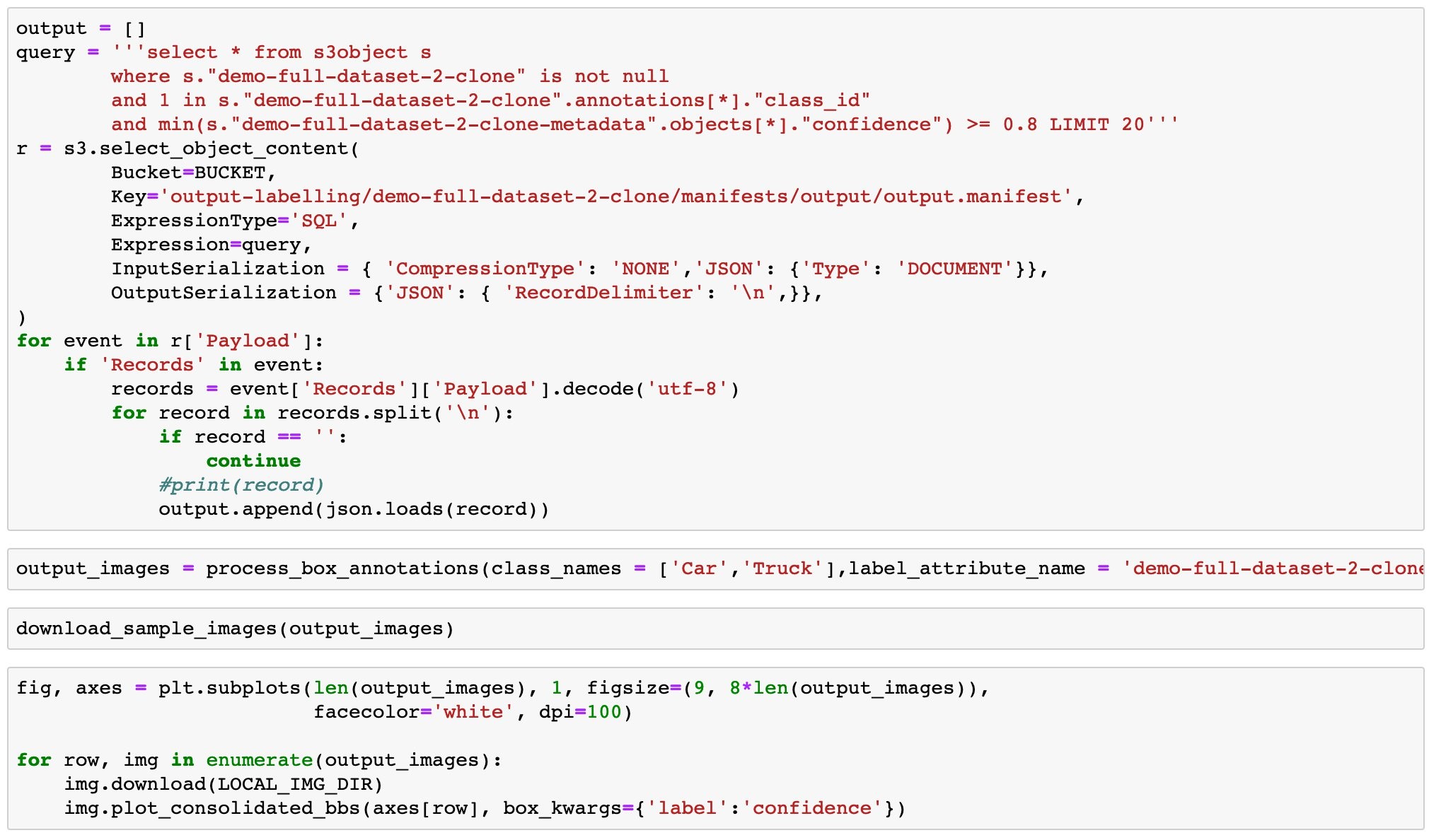 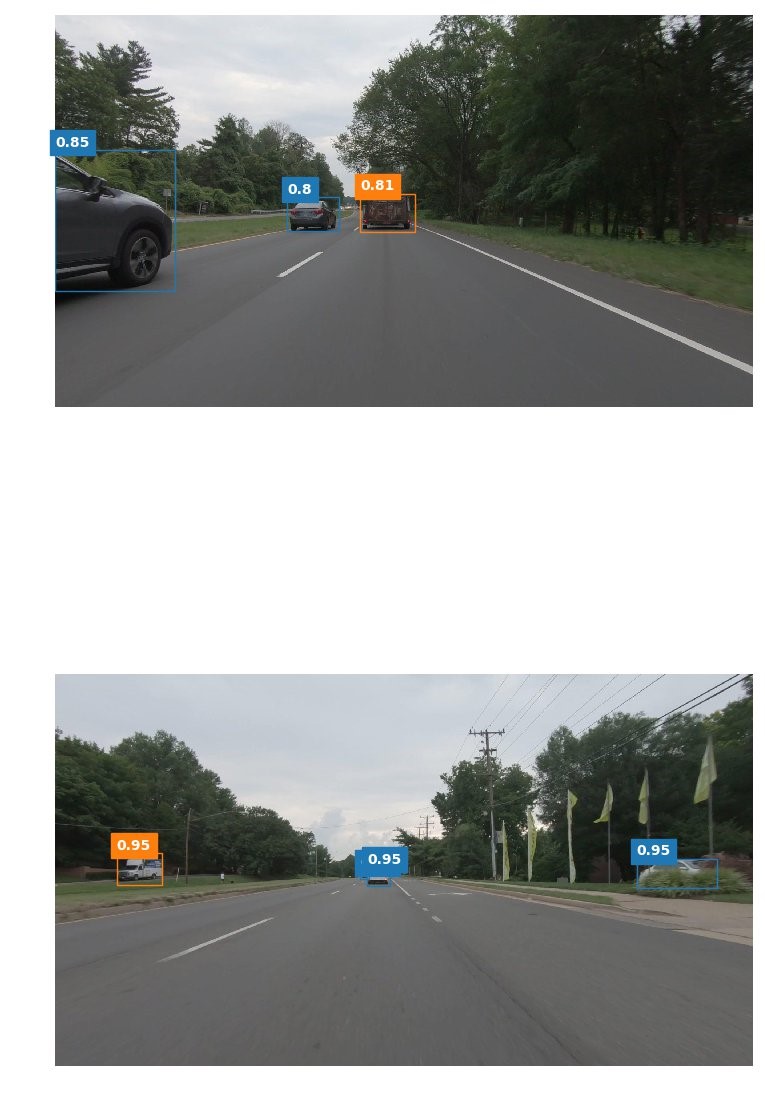 Objective: Identify all images with at least one Person in them. 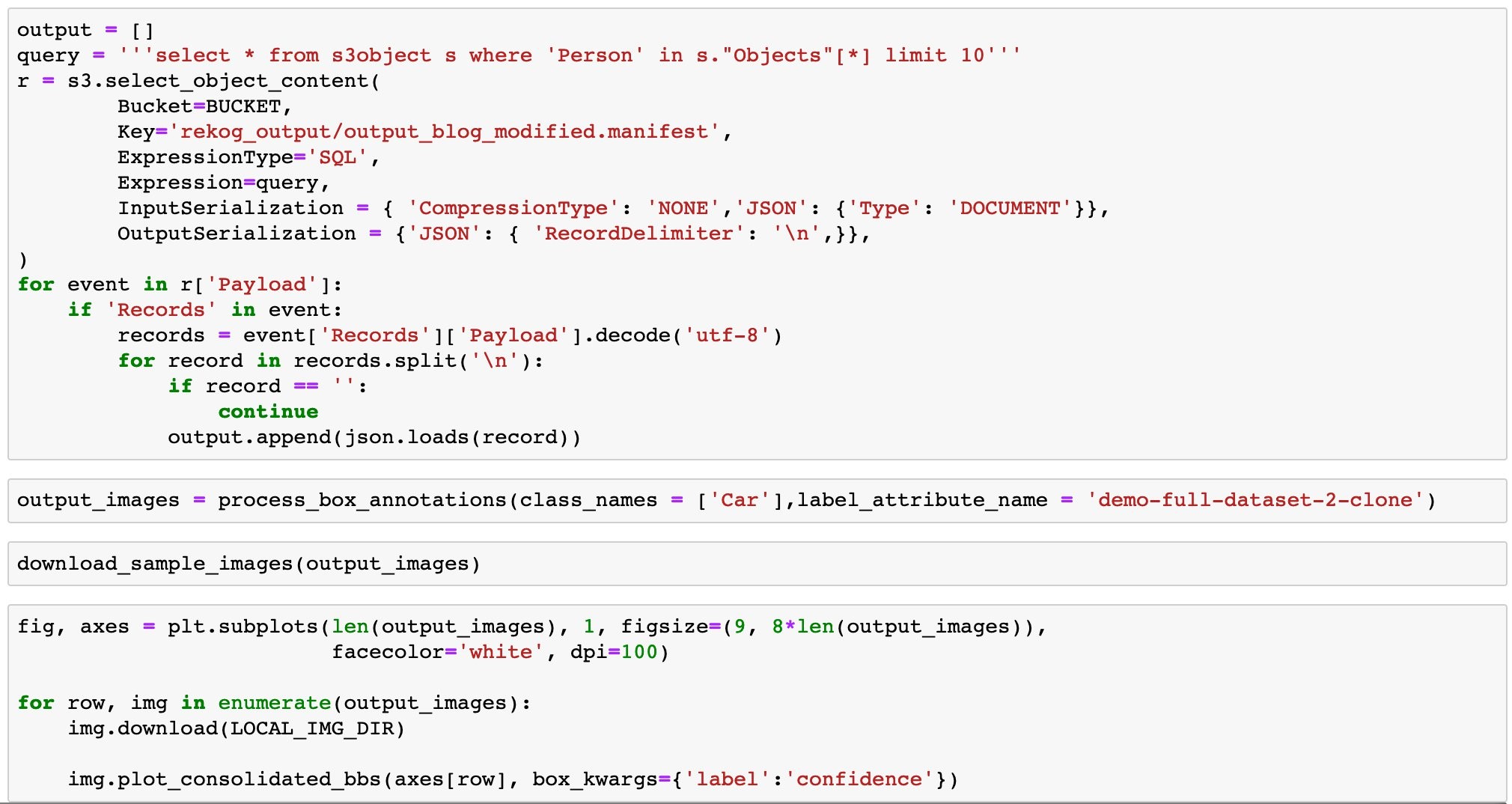 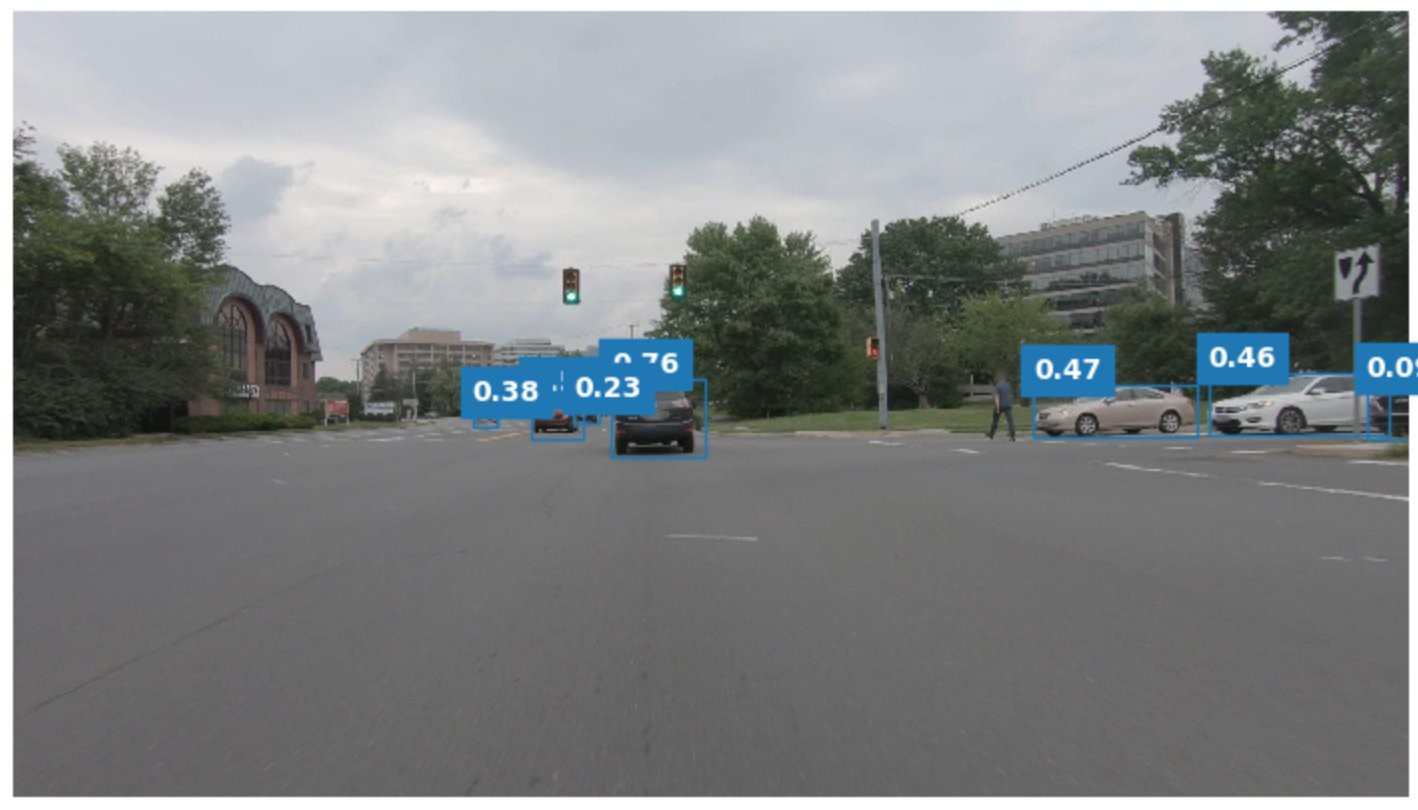 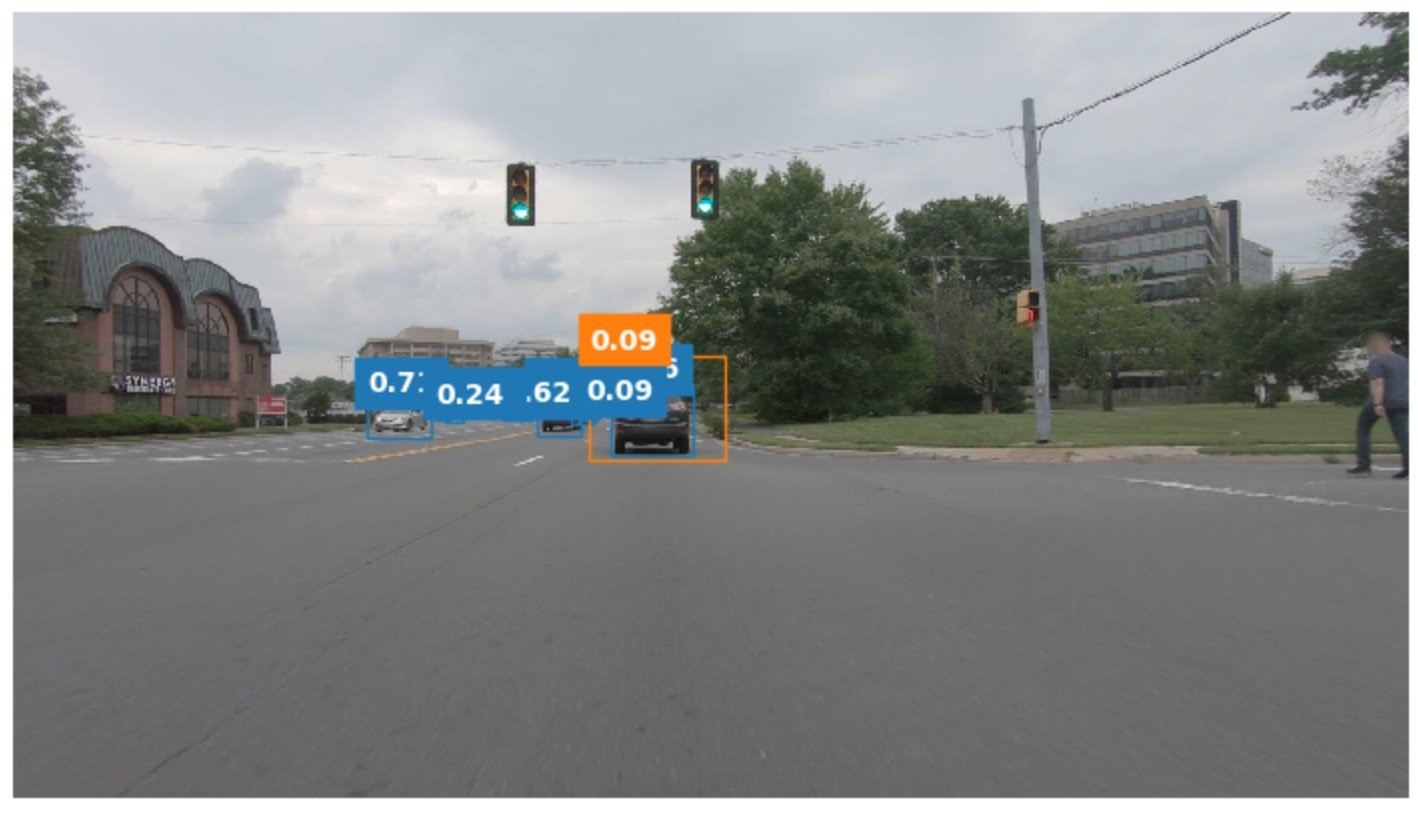 Objective: Identify all images with at least some text in them (for example, on signboards) 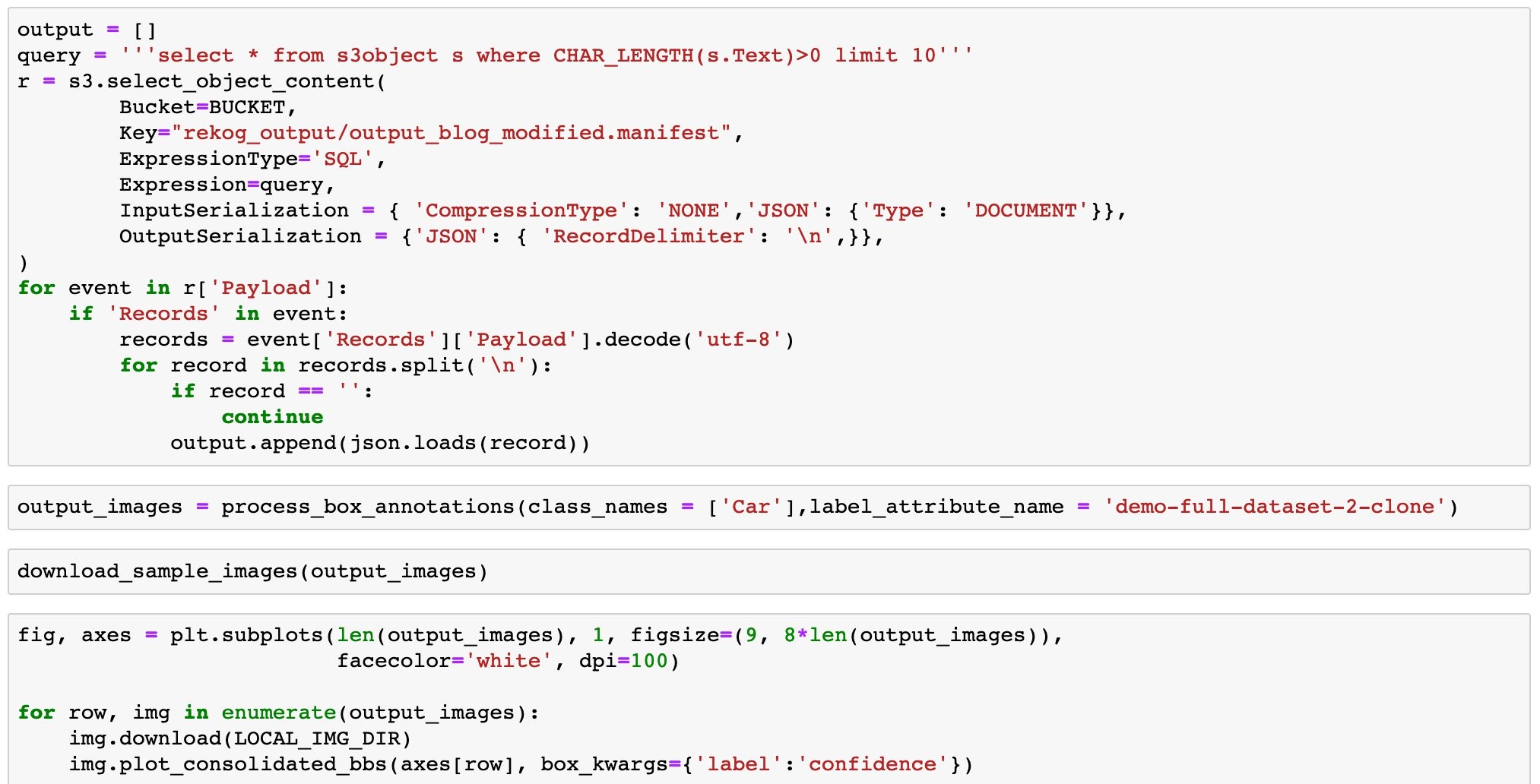 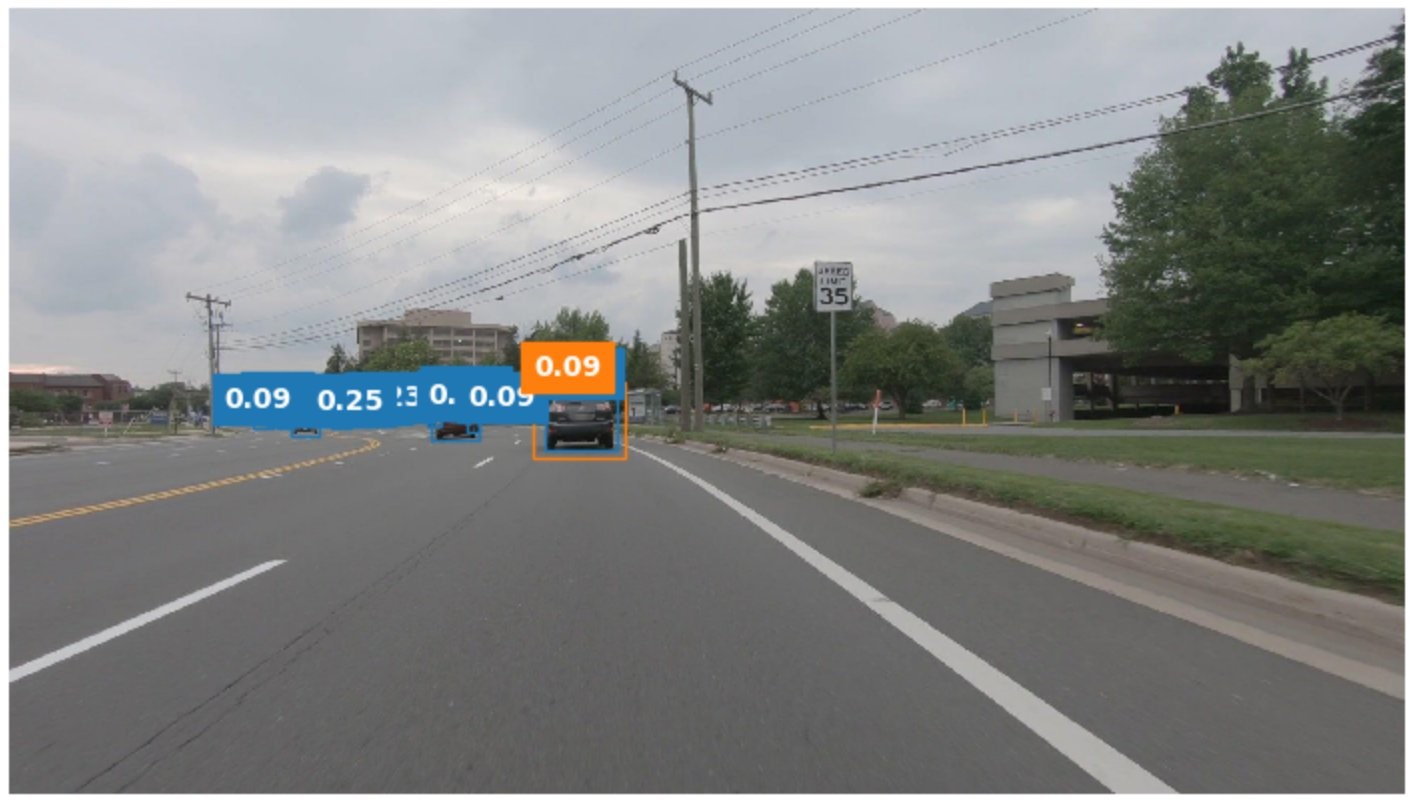 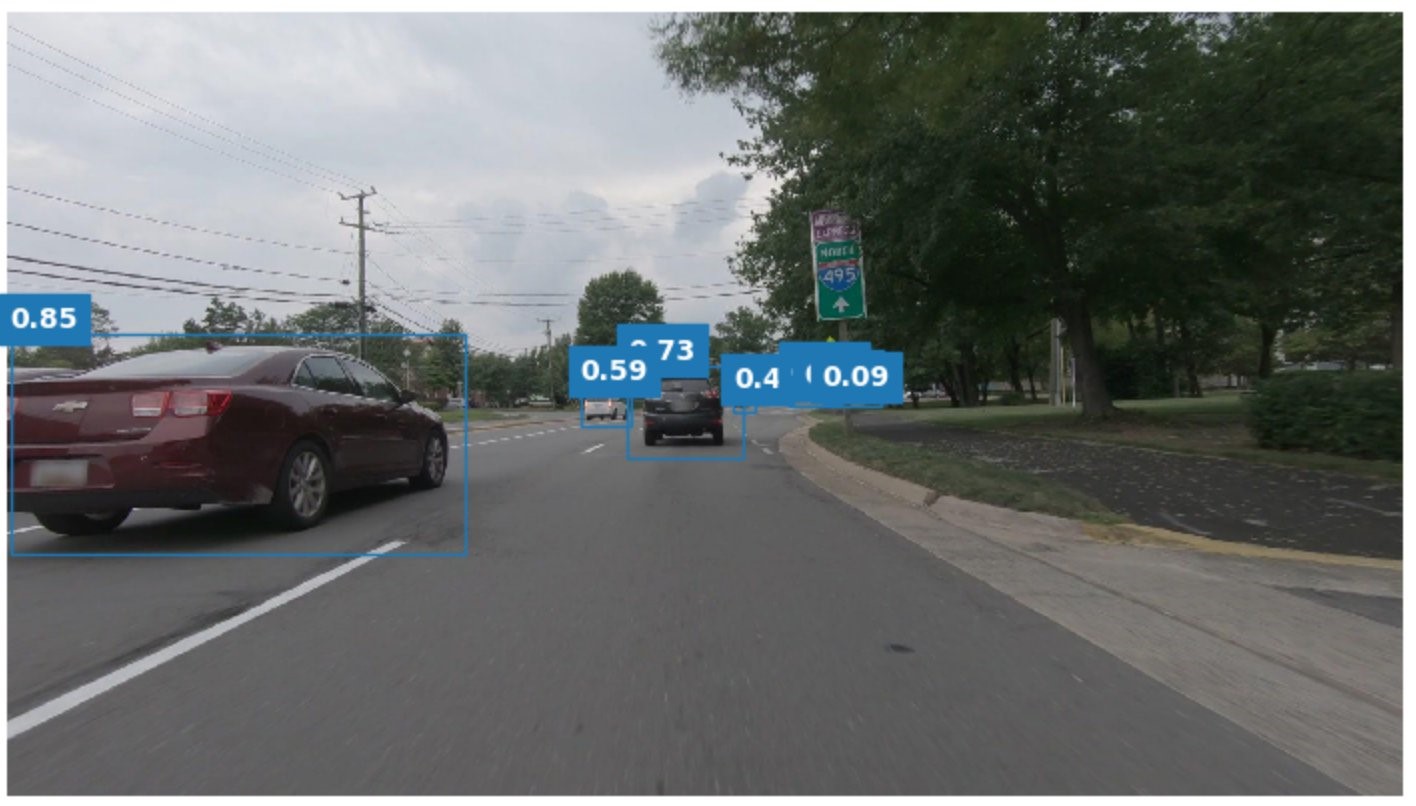 In this blog, we showed an architecture to automate data ingestion and Ground Truth labeling for autonomous vehicle development. We initiated a workflow to process a data lake to anonymize the individual video frames and then prepare the dataset for Ground Truth labeling. The ground truth labeling UI was offered to a globally distributed workforce which labeled our images at scale. If you are developing an autonomous vehicle/robotics platform, contact your AWS account team for more information.