This post provides guidance on how to configure Amazon Athena federation with AWS Lambda and Amazon Redshift, while addressing performance considerations to ensure proper use.

In these scenarios, Athena federation with Amazon Redshift allows you to seamlessly access the data in your Amazon Redshift data warehouse without having to wait to unload the data to the Amazon S3 data lake, which removes the overhead in managing such jobs.

In this post, you walk through a step-by-step configuration to set up Athena federation using Lambda to access data in Amazon Redshift. You also see a performance benchmark analysis of interactive and ad hoc TPC-DS queries, and learn some key performance considerations and best practices when using federation.

Data federation is the capability to integrate data in another data store using a single interface. The following diagram depicts how Athena federation works by using Lambda to integrate with a federated data source. 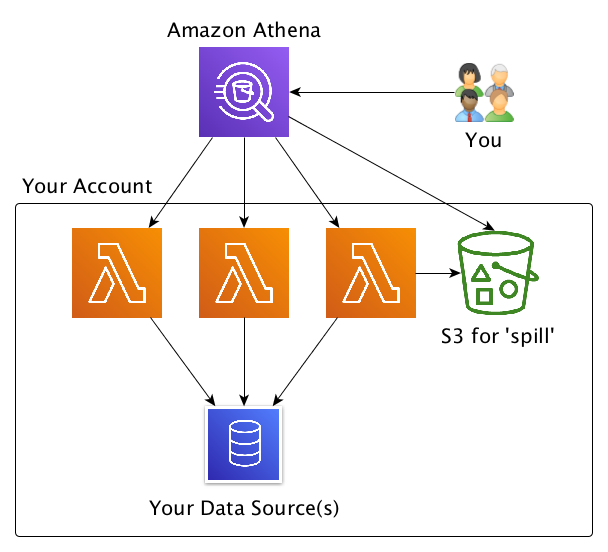 Lambda lets you run code without provisioning or managing servers. You can run code for virtually any type of application with zero administration and only pay for when the code is running.

The following diagram depicts all the data source connectors available as of this writing in the AWS Serverless Application Repository. 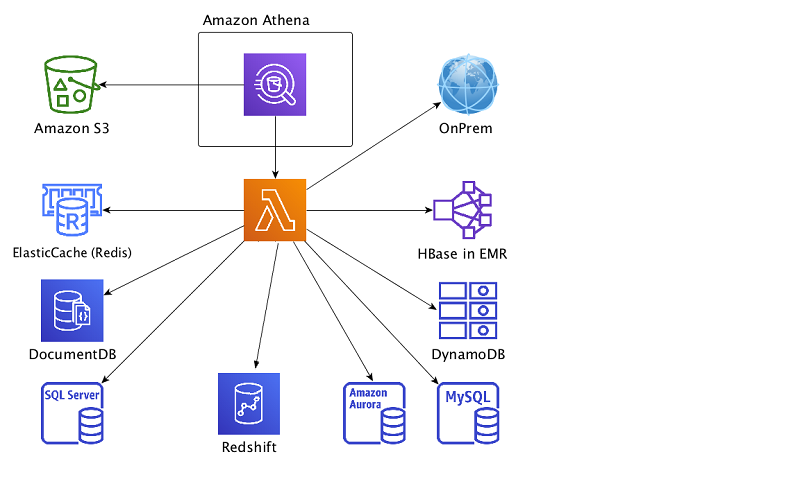 The AWS Serverless Application Repository is a managed repository for serverless applications. It enables you to store and share reusable applications, and easily assemble and deploy serverless architectures in powerful new ways.

You can also create a custom connector for sources that aren’t in the AWS Serverless Application Repository.

Before you get started, create a secret for the Amazon Redshift login ID and password using AWS Secrets Manager.

Setting up your S3 bucket

On the Amazon S3 console, create a new S3 bucket and subfolder for Lambda to use. For this post, use the name myworkspace0009/athenafederation. 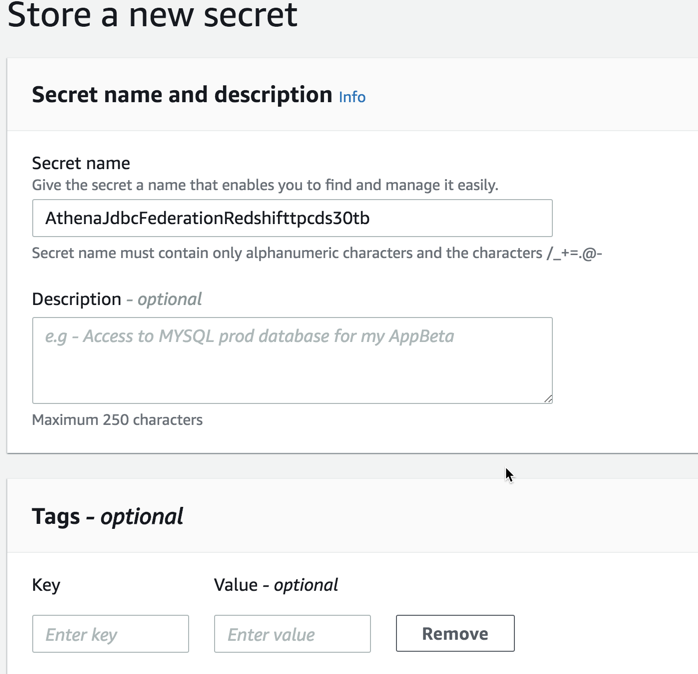 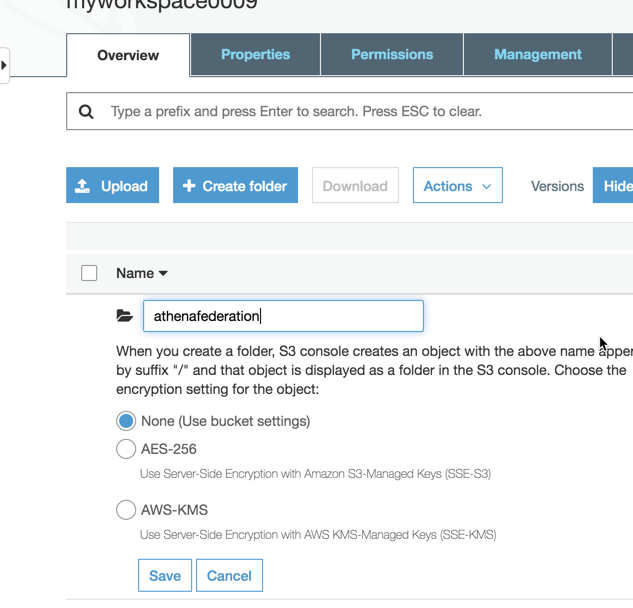 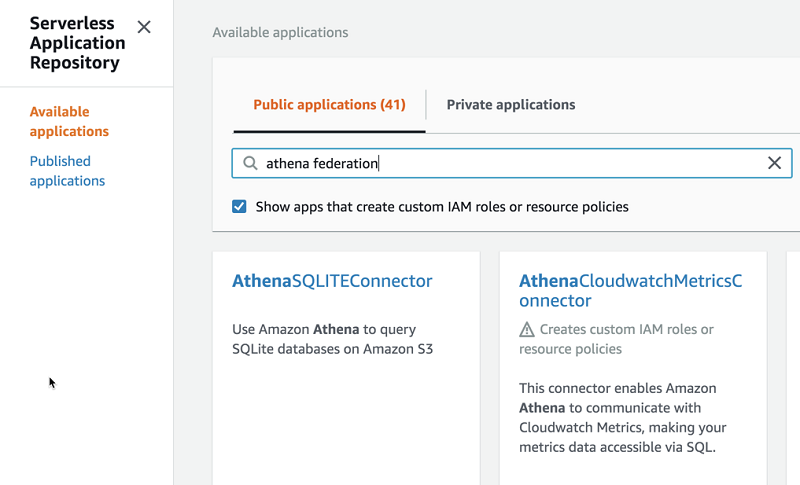 In the next steps, you configure an Amazon Virtual Private Cloud (Amazon VPC) endpoint for Amazon S3 to allow Lambda to write federated query results to Amazon S3. 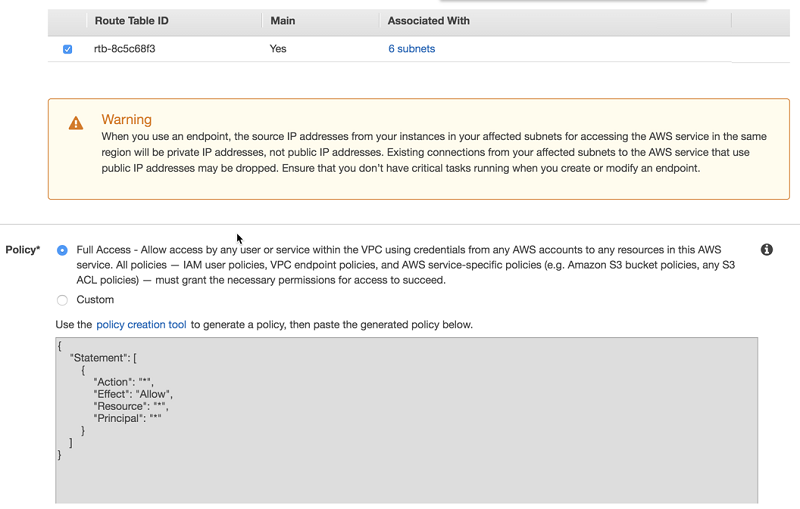 When this feature becomes generally available, you won’t need to use this workgroup name. 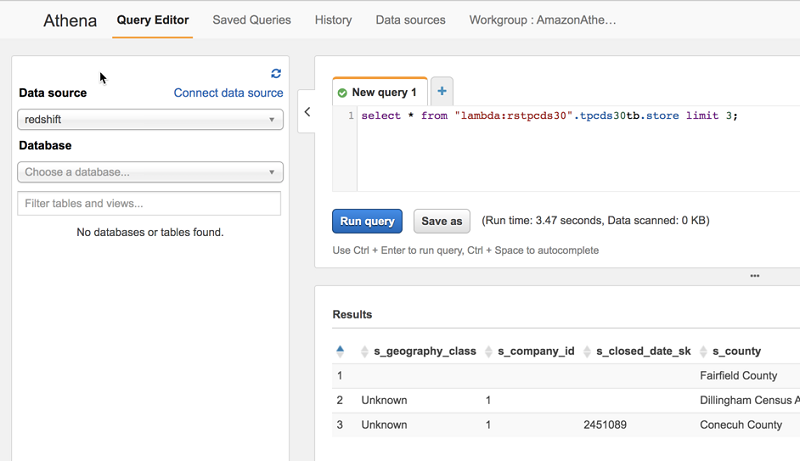 Several customers have asked us for performance insights and prescriptive guidance on how queries in Athena compare against federated queries and how to use them. In this section, we use a TPC-DS 3 TB standard dataset and a select few queries that fall in the category of ad hoc and interactive. The comparison of their performance should give you an idea of what to expect when running federated queries against Amazon Redshift.

We ran the following four tests:

The following graph represents the performance of some of the ad hoc and interactive TPC-DS queries. 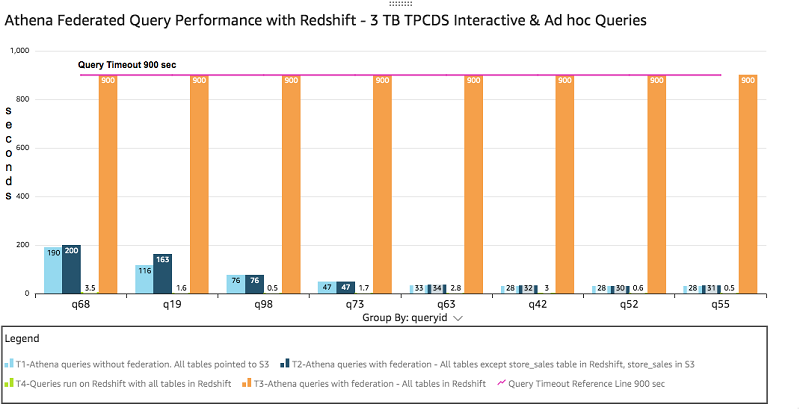 In the preceding graph, all T3 queries timed out at 900 seconds, depicted by the pink reference line, due to the Lambda 900-second timeout limit. This is due to overhead from store_sales fact data that needed to be transferred back to Athena.

The following graph removes T3 from the visualization, which gives better visibility when comparing the other tests. 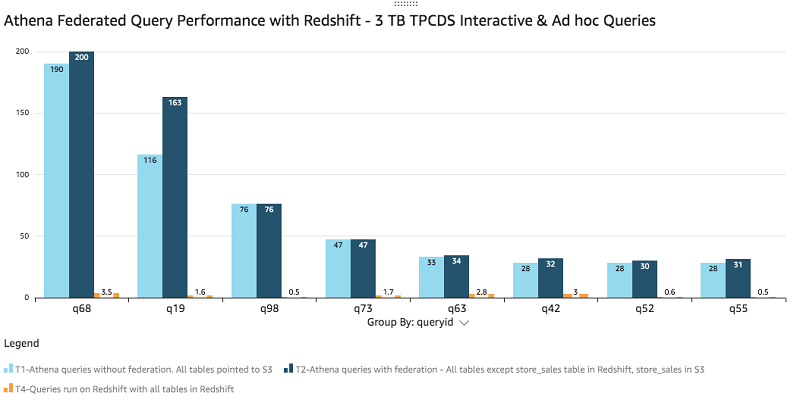 Notice the query performance between T1 and T2 that completed in almost the same time while T4 queries ran significantly faster.

Amazon Redshift beats the performance of Athena in providing extremely low latency and should be the tool of choice if you’re looking for very low SLAs for analytics queries that Athena can’t achieve.

The following graph shows the data scanned in Amazon S3 for T1 and T2, which outlines why there isn’t much difference in query performance when compared to federated queries.

For the T2 federated queries, a small amount of dimension data is filtered in Amazon Redshift and brought back to Athena, instead of scanning the entire dimension tables. This is a typical nature for several ad hoc and interactive queries.

The performance of these TPC-DS queries between T1 and T2 is comparable because very little data is transferred back to Athena. You can see a similar behavior in several ad hoc and interactive query use cases because they use limited dimensions and scan a small subset of dimension data. Due to the 900-second timeout for the Lambda instances that connect to Amazon Redshift, it’s advised to minimize the amount of data the query brings back. Although Athena uses multiple Lambda instances in parallel to run your federated query, it’s also important to make sure the Amazon Redshift WLM queue has enough slots to process it, thereby not leading to queue wait time. For example, in some of the preceding queries, 20 Lambda executions were connecting to Amazon Redshift concurrently.

When considering Athena federation with Amazon Redshift, you could take into account the following best practices:

In this post, you learned how to configure and use Athena federation with Amazon Redshift using Lambda. Now you don’t need to wait for all the data in your Amazon Redshift data warehouse to be unloaded to Amazon S3 and maintained on a day-to-day basis to run your queries. You can use the best practice considerations outlined in the post to minimize the data transferred from Amazon Redshift for better performance. When queries are well written for federation, the performance penalties are negligible, as observed in the TPC-DS benchmark queries in this post. Happy query federating!

Harsha Tadiparthi is a Specialist Sr. Solutions Architect, AWS Analytics. He enjoys solving complex customer problems in Databases and Analytics and delivering successful outcomes. Outside of work, he loves to spend time with his family, watch movies, and travel whenever possible.