Sumo Logic started around the same time as the AWS stack was starting to mature. The company initially chose infrastructure that was tried and tested, but also cutting-edge at the time, namely Amazon RDS for MySQL instances.

However, over time, that choice started to cost us a significant number of developer hours. Developers spent time performing MySQL version upgrades, scaling instances due to increased database connections, and scaling storage as data and demand from our customers grew with us.

This meant that there was a constant struggle between having customer-visible downtime and staying on an older version of MySQL for too long. We needed a solution that was more hands-off, robust, and flexible for any future workloads we may see as we grew.

More than 2,000 customers around the globe rely on Sumo Logic for the analytics and insights to build, run, and secure their modern applications and cloud infrastructures. With Sumo Logic, customers gain a multi-tenant service-model advantage to accelerate their shift to continuous innovation, increasing competitive advantage, business value, and growth.

Why we migrated to Amazon Aurora

Migrating over to Amazon Aurora provided several benefits over the classic RDS implementation provided by Amazon:

Challenges and migration approaches that we considered

Sumo Logic processes hundreds of petabytes of data every day. Any disruption, delay, or downtime becomes orders of magnitudes worse and absolutely critical, given that we are the solution that our customers use to deal with similar issues of their own. We host terabytes of storage with thousands of database operations per second across each of our databases in eight-plus AWS Regions all over the world. Hundreds of thousands of users log in to Sumo services every day.

To migrate our EC2 instances (non-VPC) running on EC2-Classic networking platform (that hosted our application) to VPC, we needed to migrate all our databases into VPC first. This was because if you want an EC2 instance that is in VPC to access a database that is not in VPC, it needs to do so over the public internet. This migration thus meant opening up our VPC to the internet. This was a security concern, even though in this case both the EC2 instance and RDS instance are protected by their own security groups for user access.

For some background on this process, see Scenarios for Accessing a DB Instance in a VPC in the RDS documentation.

The push-button migration that Amazon provides for RDS instances incurs about 5–10 minutes of downtime, at the time we performed the migration. We were aiming for minimal or no downtime because even with maintenance windows, our systems are always operational. We ingest hundreds of petabytes of data on any given day and perform thousands of database operations per second. Any downtime thus causes problems across the board.

Even though you can create read replicas for RDS DB instances, you can’t do so across the VPC boundary. This means that an instance needs to be in a VPC for its read replica to also exist in a VPC.

We had a few discussions with our AWS technical account managers regarding the possible options to mitigate the above challenges. They were a great source of information and support during this whole process. They provided us with an AWS whitepaper on the topic that detailed moving RDS MySQL databases to VPC. But this was not a use-case that worked for us due to the challenges mentioned preceding.

Around the same time, we started planning to migrate over our databases to Aurora. By our figures, if we did the migration to VPC and migration to Aurora separately, it would have taken us six-plus months. It would have also cost a lot of development hours, mainly due to the slow rollout and minimum downtime requirements per deployment. Instead, migrating directly to Aurora from RDS DB instances on the EC2-Classic networking platform accomplished both goals in a single migration effort, saving us three months of cost and effort.

In the end, we chose to use the Aurora migration path using Aurora read replicas.

There are several considerations when performing a task that is going to affect literally all parts of your distributed system. Planning is crucial when working with several teams (infrastructure, ingest, search, security, analytics, customer success, and so on) with varying upgrade cycles, expectations, workloads, and impacts on service interruption. Because databases are central to any operations of our service, all teams were equally affected and had to either communicate internally or to customers.

As part of planning, you have to consider dependencies between databases, modules, services, and teams. If possible, you have to try to group together migrations that are mostly independent of each other for faster turnaround time.

Here’s an example of a roll out plan that we used and shared with all teams.

How we migrated our RDS DB instances to Aurora in VPC

Moving to Aurora directly instead of migrating the RDS instances into VPC first gave us both Aurora and VPC in one shot.

Amazon Aurora provides a great migration path for this very purpose: Aurora read replicas. These replicas were designed to be used across the VPC boundary and gave us a replicating copy of our data inside VPC directly. This way, we skipped the complex process of moving our existing RDS instances to VPC. Instead, we directly migrated them to Aurora, which gave us VPC by default. For a great step-by-step description of the process, see the post Create an Amazon Aurora Read Replica from an RDS MySQL DB Instance on the AWS News blog.

First step was to create Aurora read replicas for each of our databases. Creating these does a few things:

All of this happens in the background and there is minimal overhead to the operation of the master database — which was no more than a ~5-10% increase in memory and CPU utilization, as seen through Amazon CloudWatch metrics monitoring. However, keep in mind that once the snapshot is migrated, binary log replication can have a similar detrimental performance impact on the master database, so we had to make sure that we size up any DB instances that were near our alert thresholds for CPU, memory or database connections, given the above increase in usage.

This process typically took anywhere between four to six hours per database. Considering hundreds of databases contained on about a hundred database instances across all AWS Regions, it was crucial that this step be started as soon as possible. It also needed to be finished long before we start the actual switchover. Thankfully, this process was mostly nonintrusive, apart from some increased load on the master instances. (We had previously provisioned higher in anticipation of this.)

After all the Aurora replicas were created for our master databases and they were all replicating, it was time for the migration.

In our switchover process, we took these steps:

After migration, we took these steps:

Voilà! The migration is complete!

One of the most important metrics to monitor during the switchover is Login failures. 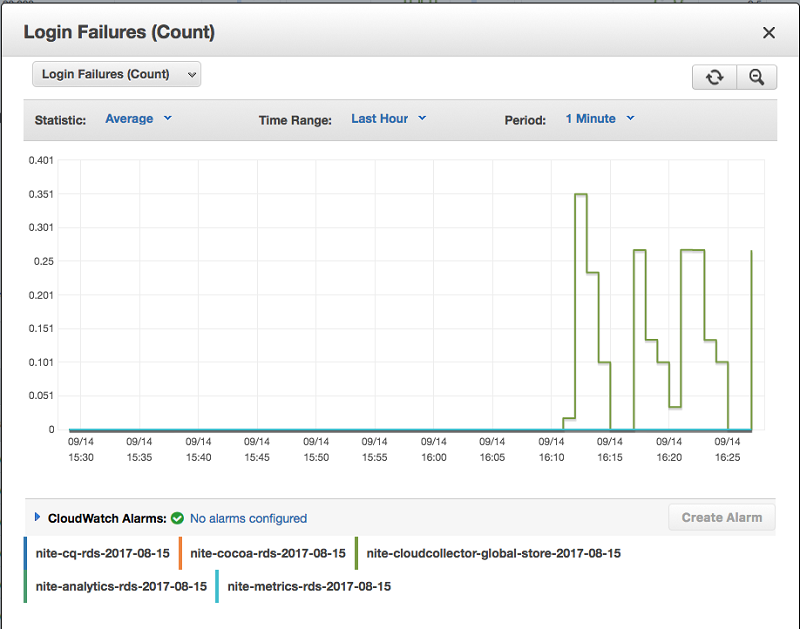 This metric indicates that one or more of your services is unable to connect to the new master instances.

Other metrics to monitor:

We had hundreds of databases on about a hundred instances to migrate over, each containing terabytes of data. If a process of this scale is done manually, this could mean a lot of places for human errors to get introduced:

We wanted to eliminate any deviation of process between any two database migrations.

A non-exhaustive list of things we automated/added tooling for: (these were in-house tools developed specifically for our use case with future migrations in mind.)

Migrating all of our databases took about 3-4 months including the pre-migration steps while keeping all of our systems operational.

Throughout all of this, we had great help from our AWS technical account managers (TAMs) and the Aurora team. We had a few back and forth discussions with them and they always there to help us out and hash out possible strategies. The TAMs also ran several pressure tests and mock migrations on varying types of configurations and accounts included classic (individual AWS accounts), managed (administrator managed), VPC only and hybrid (classic and VPC).

We relied heavily on monitoring and KPIs during this migration (as mentioned in the switchover section), both from AWS Cloudwatch and the internal monitoring using of our own Sumo Logic platform.

Since we use Sumo Logic internally to monitor our own service and infrastructure, we have a massive collections of Sumo Logic dashboards per service that helped our on-call engineers to quickly diagnose and triage any issues caused during the migration like login failures, pre and post migration comparisons on database connections, select throughput, latency, service stability, measurable customer downtime and impact on search, indexing, and streaming of petabytes of data into Sumo Logic.

We were able to migrate about a hundred database instances with hundreds of databases within them, with zero downtime from the customers’ perspective because:

Detailed planning with accounting for production upgrades, spikes, downtimes, etc. and most importantly, unknowns, bugs and production fires helped us to stay on course with all teams being in the know at all times.

This migration allowed us to move from older hardware and systems to the latest the RDS platform has to offer, and while doing so, we were able to make our systems more robust and future proof not just in terms of technology, but also processes and future migrations.

Aditya Kelkar is a backend engineer at Sumo Logic in the data and infrastructure team, working on designing and developing next generation features. Aditya also works on ensuring that Sumo Logic has a robust, scalable infrastructure that is up to date with the latest industry standards and trends including containers, microservices and large-scale distributed systems. In his spare time, he enjoys woodworking and playing with his dog.