In many real work applications, you can use custom Docker images with AWS Batch and AWS Cloud Development Kit(CDK) to execute complex jobs efficiently. AWS CDK is an open source software development framework to model and provision your cloud application resources using familiar programming languages, including TypeScript, JavaScript, Python, C# and Java. For the solution in this blog, we will use C# for the infrastructure code. This is a sequel to an earlier published blog with same infrastructure and concept. In this blog, we will leverage the capabilities and features of AWS CDK (with Microsoft .NET using C#) instead of CloudFormation. Let’s get started!

This post provides a file processing implementation using Docker images and Amazon S3, AWS Lambda, Amazon DynamoDB, and AWS Batch. In this scenario, the user uploads a CSV file to into an Amazon S3 bucket, which is processed by AWS Batch as a job. These jobs can be packaged as Docker containers and are executed using Amazon EC2 and Amazon ECS. The following steps provide an overview of this implementation:

The following steps outline this walk-through. Detailed steps are given throughout the rest of this post.

Once the code is downloaded, please take a moment to see how CDK provides a simpler implementation for spinning up an infrastructure using C# code. You may use Visual Studio Code or your favorite choice of IDE to open the folder (aws-netcore-app-using-batch). The provided source code consists of the following major components. Note the corresponding downloaded path for these components provided below.

Open the file “/aws-netcore-app-using-batch/cdk/src/MyApp/SrcStack.cs”. Code below (provided a snippet from the github solution) spins up a VPC for the required CIDR and number of availability zones.

Similarly, developers have an option of implementing the CDK Constructs and can define & deploy an AWS Service. In the below snippet, Batch service role is created by implementing the construct and returns an IAM Role. See full source in /aws-netcore-app-using-batch/cdk/src/MyApp/Modules/BatchServiceRole.cs

When deployed, the AWS CDK creates the following infrastructure. 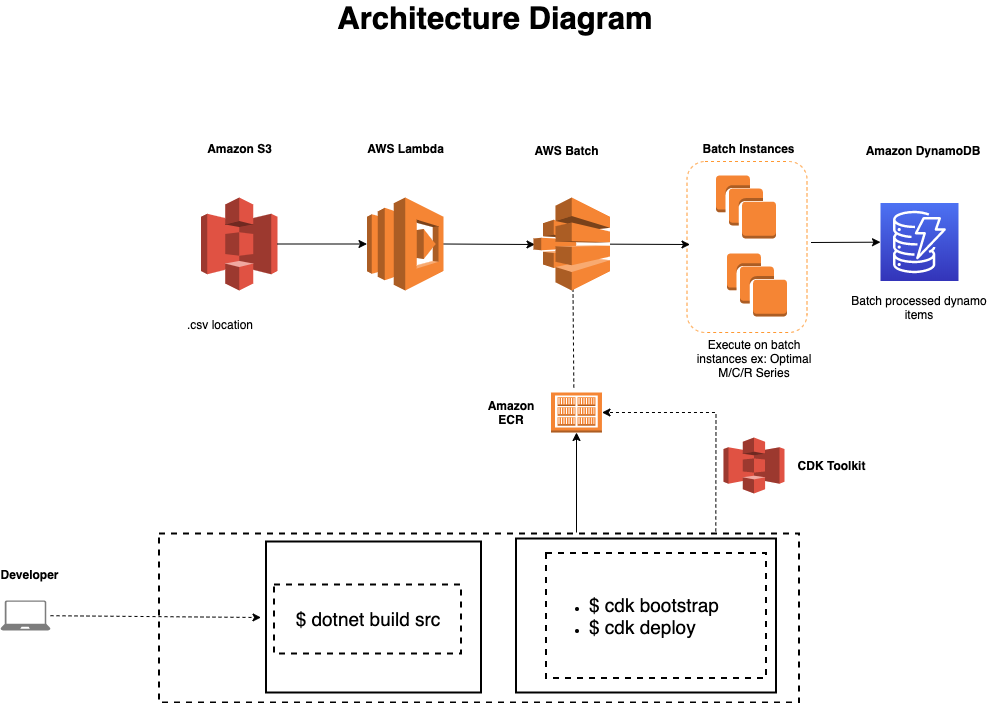 You can download the source from the github. Below steps will detail using the downloaded code. This has the source code for AWS CDK that spins up the infrastructure. Additionally a lambda Python code and batch python application (.py file) are provided. A sample CSV file is provided which will be processed by the batch. You can optionally use the below git command to clone the repository as below. This becomes your SOUCE_REPOSITORY

NOTE: Optionally, you can also use the “run.sh” script/bash file provided as part of the code base within “cdk” folder, that will take care of the above steps. Once the preceding CDK Deploy command is completed successfully, two CloudFormation stacks are created. Take a moment to identify the major components. The CloudFormation stack spins up the following resources, which can be viewed in the AWS Management Console. Please find sample stack resources that gets created. This can be changed with “Constants.cs” file having STACK_PREFIX variable (Ex: netcore is the default prefix in the provided sample)

Using CDK constructs, we have built the above infrastructure and integrated the solution with a Public Load Balancer. The output of this stack will give the API URLs for health check and API validation. As you notice by defining the solution using CDK, you were able to:

Other major advantages using this CDK approach include, as a developer/development team we should be able, to

AWS CDK Destroy command deletes the CloudFormation stack and all the AWS Resources that were created as part of the stack. AWS Services that provide “Retain” policy on stack deletion need to be manually deleted. This can be done either in AWS Console or using AWS CLI (commands provided) below

# CLI Commands to delete the S3, Dynamo and ECR repository

You were able to launch an application process involving AWS Batch to integrate with various AWS services. Depending on the scalability of the application needs, AWS Batch is able to process both faster and cost efficiently. The post walked through deploying a lambda and batch processing code with infrastructure as code using Microsoft .NET AWS CDK.

I encourage you to test this example and see for yourself how this overall orchestration works with AWS Batch. Then, it is just a matter of replacing your Python (or any other programming language framework) code, packaging it as a Docker container, and letting the AWS Batch handle the process efficiently. If you decide to give it a try, have any doubt, or want to let me know what you think about the post, please leave a comment!

If you are interested in a .NET Web API with Amazon Aurora database using AWS CDK, refer this blog.