How Greenko uses AWS IoT and serverless for wind monitoring

India is going through a revolution in renewable energy (RE). During fiscal years 2016–2020, the Indian RE generation space saw a compound annual growth rate of 17.33 percent. This was fueled by dedicated support from the government in the form of RE-focused policies such as the Green Energy Corridor Project and increased investment in the sector. Since 2014 more than US$42 billion has been invested in India’s RE market. The Indian government is aiming to reach a target of total installed capacity of 227 gigawatts (GW) by 2022 and 523 GW by 2030. This will include almost 73 GW from hydro. Due to these factors, India is ranked third globally in investments in RE.

Driving the change to renewable energy

Greenko Group (Greenko) is helping drive this change to RE in India. Greenko is a leading energy solution provider in the changing energy landscape of India. With a total installed capacity of 7.5 GW, which includes wind (2000+ wind turbines), solar (5+ million solar panels) and hydro (25 sites), Greenko has electrified over 6.3 million households and has removed an equivalent of over 17 million tons of carbon dioxide from the atmosphere.

Greenko’s corporate strategy is focused on powering India with decarbonized, digitized, and decentralized energy assets. Toward this end, Greenko has moved from being a pure-play RE producer to a long-duration energy storage (LDES) provider. LDES providers address system challenges such as balancing electricity supply and demand and changing transmission flow patterns with corresponding decreases in system stability. They can accomplish this through a balanced combination of intelligent energy platforms and pumped storage systems, like Greenko’s Integrated Renewable Energy Storage Projects (IRESPs). IRESPs will harness the power of solar and wind resources with digitally connected storage infrastructure to provide scheduled and flexible around-the-clock power to the grid. Greenko has license to build and operate multiple IRESPs across five states in India with a daily storage capacity of 40 gigawatt-hours (GWh).

Greenko’s IT infrastructure was completely on premises, with data centers located in the city of Hyderabad. The company observed the following challenges with its RE asset monitoring architecture:

In December 2020, the India account team of Amazon Web Services (AWS) contacted Greenko to introduce the team’s work in the RE space, including the work outlined in Real-time operational monitoring of renewable energy assets with AWS IoT. The author of this blogpost engaged Greenko representatives, including the Greenko leadership team: Mr. Tirumala Raju Mandapati, head of information and communication technology (ICT), and Mr. Sateesh Konduru, general manager of ICT.

AWS presented a dive deep into the concepts of using the Internet of Things (IoT) on AWS and how AWS IoT services can be a vehicle to deliver part of the Greenko corporate strategy—the digitization and decentralization of renewable assets. AWS recommended a pilot program with a quantifiable minimum viable product (MVP) that resolves an important use case and highlights the capabilities that AWS IoT has to offer.

Greenko accepted the recommendation, and in April 2021 it delivered a pilot scope and an MVP was finalized. The MVP was to be performed on one of the largest Greenko wind farms in the city of Poovani in the state of Tamil Nadu. Greenko named the MVP Greenko Wind Farm Health 1.0. The scope of the MVP involved four pillars, as shown in Figure 1. 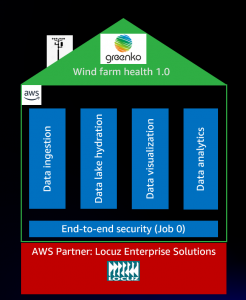 Figure 1: Scope of the Greenko MVP

Working with the AWS team and Locuz, Greenko successfully delivered the MVP with bias for action in just under 10 months. The timeline and milestones of the delivery are shown in Figure 2 below.

The following is the AWS reference architecture that was created for the Greenko MVP. Although the MVP was done on 100 wind turbines, the architecture is scalable and robust to support multiple sites with thousands of assets.

It’s important to note that the solution is completely serverless with minimal to no infrastructure to manage for the Greenko team. 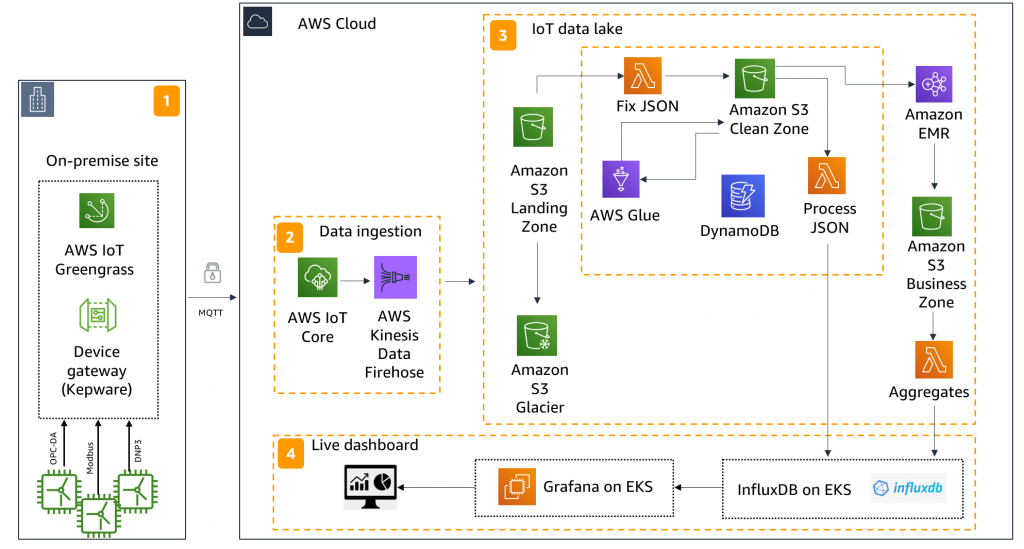 Let us go through each stage of the data journey, one block at a time.

In Greenko’s case, we use the AWS IoT rules engine to divert the IoT data to Amazon Kinesis Data Firehose.

Grafana on Amazon EKS: Grafana is a multiplatform open-source analytics and interactive visualization web application. It provides charts, graphs, and alerts for the web when connected to supported data sources. It easily connects with InfluxDB and has a number of plugins for various graphs. Within a short time, we can get insightful visualizations into our time series data. We set up Grafana on Kubernetes using Amazon EKS. Below are few screenshots of the Grafana live dashboard.

Once the MVP was live, we let it run for 1 month. At the end, the AWS cost of running the solution was approximately $8.00 per wind turbine per month. In return for a cost of $8 per month per wind asset (worth $1 million or more each), Greenko gets the following benefits:

Looking to the future

For more information, visit Greenko Group. And to find out more about how AWS is empowering digital utilities, visit here.