Few industries test the limit of database throughput and latency like advertising technology (ad tech). Industry leaders like The Trade Desk run workloads with tens of millions of read and write events per second and single-digit millisecond response times. Growing media consumption in areas like connected TV, over-the-top (OTT) streaming, and retail means that ad tech businesses continue to see request volumes and throughput requirements grow—making performance, maintenance, and cost optimization significant technological challenges. There is a broad spectrum of open-source and commercial data storage and caching solutions available for such workloads, but selecting the right one that scales to petabyte-level processing cost effectively is not trivial.

A single ad tech company may buy, sell, or serve hundreds of billions or trillions of ads per day, pushing the limits of performance on a second-by-second basis. Under the hood, this level of throughput requires extreme capacity and deliberate measures to optimize costs. Using Amazon EC2, customers can rapidly scale up depending on demand—and use a broad slate of capabilities such as Amazon EC2 Auto Scaling, which lets users automatically add or remove Amazon EC2 instances according to conditions they define, and Amazon EC2 Spot Instances, which lets users take advantage of unused Amazon EC2 capacity in the cloud, to reduce costs. Amazon EC2 also offers a broad and deep choice of processor, storage, networking, operating system, and purchase model, which make AWS ideal for ad tech firms looking to pair Aerospike together with the most high-performing, optimized instance types. For example, we consistently see ad tech customers use storage- and memory-optimized instance families such as I3/I3en, D3/D3en, M5d, and R5/R6 as a best practice for running Aerospike workloads requiring high, sequential read and write access to very large datasets on local storage. 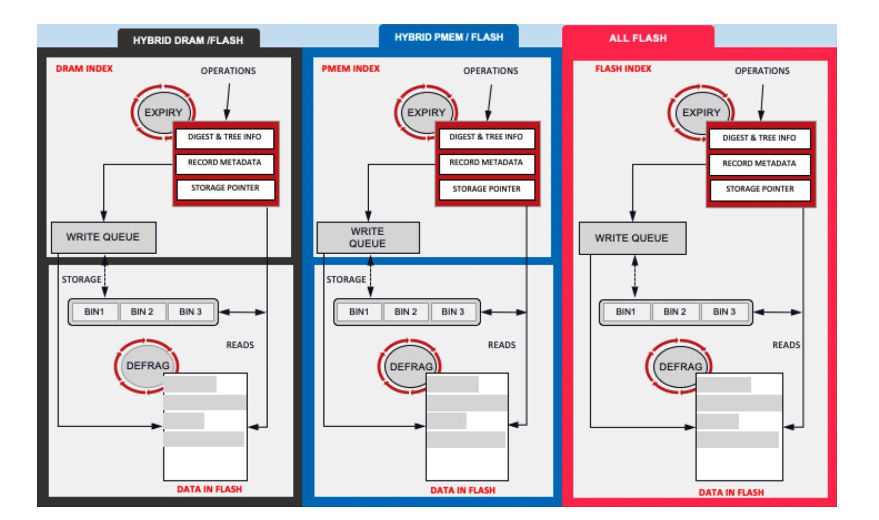 Aerospike has the flexibility to be deployed in multiple different configurations. In the all-dynamic random-access memory (DRAM) configuration, the index and user data reside in traditional memory and data is persisted to disk storage as a backup. Similarly all-PMEM, all-flash, and hybrid configurations (where the index can reside in PMEM/DRAM and data can reside in flash memory) are possible, letting customers choose the right configuration based on business needs and application requirements.

Together with AWS and Intel, Aerospike set up a 20 node cluster on AWS with each server node running on an i3en.24xlarge node featuring 768 GB of DRAM and 8 x 7,500 GB NVMe solid state drive (SSD) to benchmark performance. Client nodes were hosted on 40 c5n.9xlarge nodes featuring 96 GB DRAM each and backed by EBS volumes. Load was generated on the client nodes using the Aerospike C client. Before performing the benchmark tests, Aerospike primed the environment by running a generic read/write workload for several days. This was done to ensure that data is suitably randomized and periodic background jobs like defragmentation are triggered as in a production environment.

Aerospike’s benchmark was conducted on Amazon EC2 i3en.24xlarge server nodes, beginning with a 20-node cluster in Year 1; based on up-front AWS annual fees for the compute instances, this configuration resulted in just over $1.2 million in infrastructure costs for the year. By contrast, Cassandra’s Year 1 configuration was sized at a 514-node cluster of i3.4xlarge servers, which yielded an infrastructure cost of nearly $3.58 million for Year 1. Projections were made for Year 2 and Year 3 on an assumption of a 15% rate of data growth. As can be seen, growth in Aerospike’s expenses is much lower than Cassandra’s with an estimated $11.2 million in savings over a 3-year period. Note that the cost estimations are based on On-Demand pricing of Amazon EC2 instances, which lets users pay for compute capacity by the hour or second (minimum of 60 seconds) with no long-term commitments. Customers can take advantage of AWS Savings Plans, a flexible pricing model offering lower prices compared to On-Demand pricing, which can reduce the operational costs of Aerospike further, by up to 72% depending upon the Amazon EC2 instance types chosen to host the Aerospike server nodes.

Customers such as The Trade Desk have noted even greater performance running Aerospike with write volumes as high as 32 million key-value pairs / tuples per second with larger clusters with 150+ m5d.metal instances. In a 2020 re:Invent session, Matt Cochran, director of engineering at The Trade Desk, noted, “The elastic nature of Amazon EC2 got us to full scale pretty quickly and let us do a full-scale prototype. We were able to distribute data around the world and actually make sure that our problem was solved. The diversity of instance types we found on Amazon [EC2] was super helpful in this case too.” Cochran also recommended testing instance types per workload using the Aerospike Certification Tool (ACT) to select the right instance for the job. “Using ACT is absolutely key. You need to run this to understand what the implications are on your system, and it will prove to you what you need.”

As ad tech continues to push the limits of petabyte-scale and millisecond-latency workloads, industry customers can use the new solution for Aerospike on AWS to accelerate deployments and optimize high-throughput, low-latency workloads running on Amazon EC2. You can review ad tech customer examples and reference architectures here, or get started using Aerospike on AWS through the AWS Quick Start deployment guide for Aerospike Database Enterprise Edition. Customers can also directly subscribe to the Aerospike Database Enterprise Edition via AWS Marketplace.

Check out the full results from Aerospike’s petabyte-scale benchmark study using AWS and Intel on their website.