Bidirectional Encoder Representations from Transformers (BERT) [1] has become one of the most popular models for natural language processing (NLP) applications. BERT can outperform other models in several NLP tasks, including question answering and sentence classification.

Training the BERT model on large datasets is expensive and time consuming, and achieving low latency when performing inference on this model is challenging. Latency and throughput are key factors to deploy a model in production. In this post, we focus on optimizing these factors for BERT inference tasks. We also compare the cost of deploying BERT on different Amazon Elastic Compute Cloud (Amazon EC2) instances.

We achieved these results after a set of GPU optimizations on MXNet, described in the section Optimizing BERT model performance on MXNET 1.6 and 1.7 of this post.

G4 instances are optimized for machine learning application deployments. They’re equipped with NVIDIA T4 GPUs, powered by Tensor Cores, and deliver groundbreaking AI performance: up to 65 TFLOPS in FP16 precision and up to 130 TOPS in INT8 precision.

Amazon EC2 offers a variety of G4 instances with one or multiple GPUs, and with different amounts of vCPU and memory. You can perform BERT inference below 5 milliseconds on a single T4 GPU with 16 GB, such as on a g4dn.xlarge instance (the cost of this instance at the time of writing is $0.526 per hour on demand in the US East (N. Virginia) Region.

GluonNLP is a deep learning framework built on top of MXNet, which was specifically designed for NLP applications. It extends MXNet, providing NLP models, datasets, and examples.

GluonNLP includes an efficient implementation of the BERT model, scripts for training and performing inference, and several datasets (such as GLUE benchmark and SQuAD). For more information, see GluonNLP: NLP made easy.

For this post, we use the GluonNLP BERT implementation to perform inference on NLP tasks. Specifically, we use MXNet version 1.7 and GluonNLP version 0.10.0.

In the following graphs, we compare latency achieved by a single GPU on a g4dn.xlarge instance with FP16 precision vs. the most efficient CPU instance in terms of latency, c5.24xlarge with INT8 precision, MKL BLAS and 24 OpenMP threads. 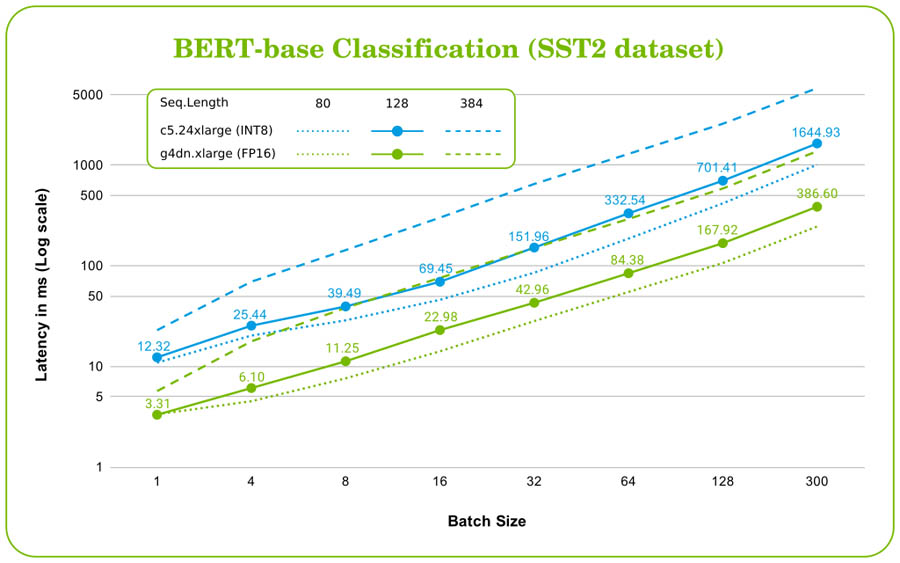 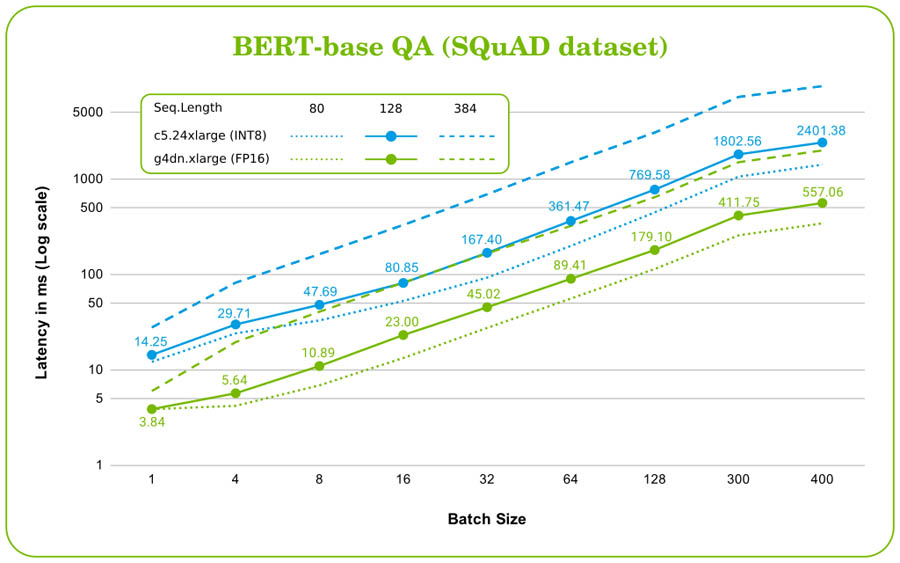 In the following two graphs, we present a cost comparison between several instances based on the throughput (sentences/s) and the cost of each instance on demand (cost per hour) in the US East (N. Virginia) Region. 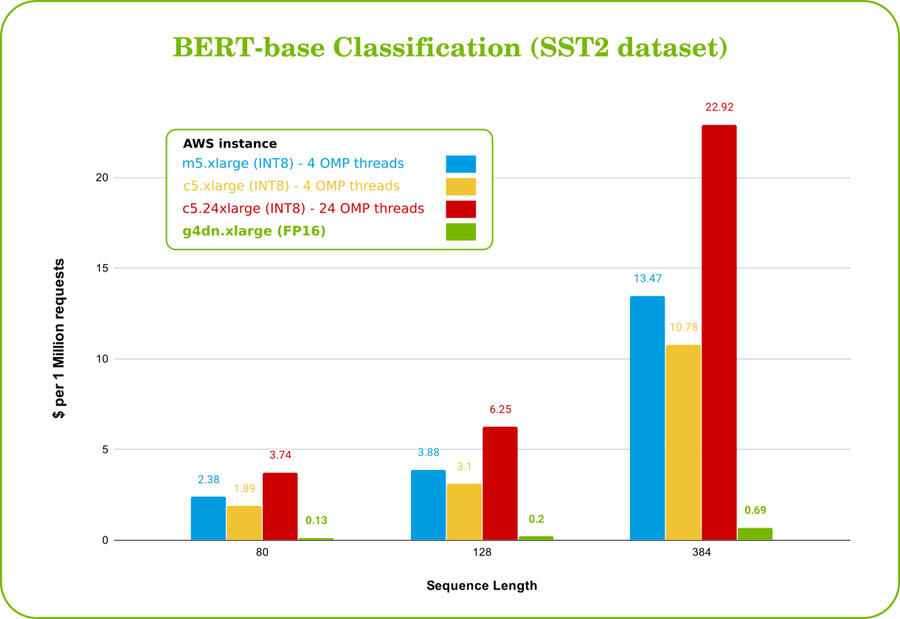 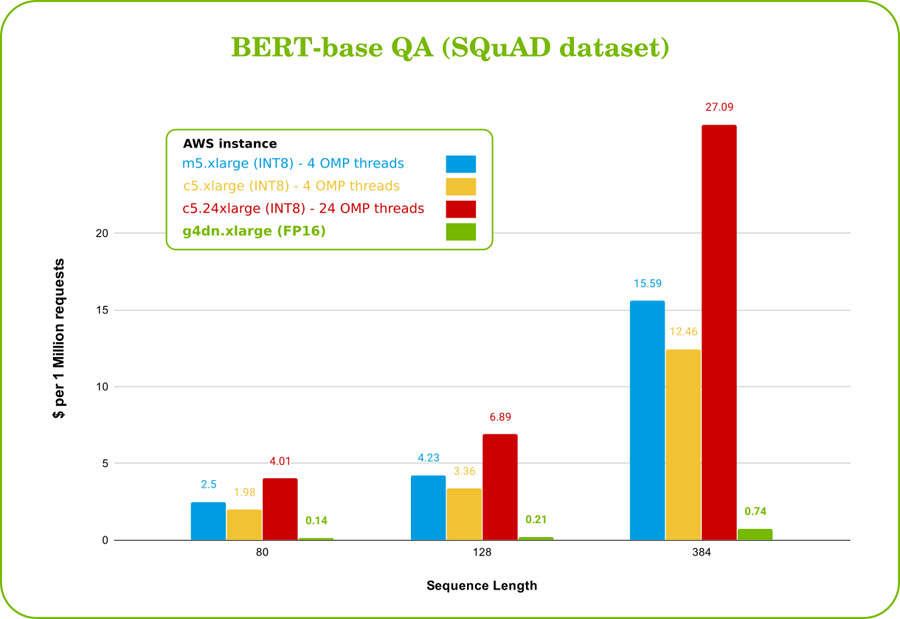 You can easily reproduce the results in the preceding section on a g4dn.xlarge instance. You can start from a pretrained model and fine-tune it for a specific task before running inference, or you can download one of the following fine-tuned models:

Then complete the following steps:

The command python setup.py install generates a custom graph pass (bertpass_lib.so) that optimizes the graph, and therefore performance. It can be passed to the inference script as an argument.

By default, these scripts run 3 epochs (to achieve the published accuracy in [1]).

They generate an output file, output_dir/net.params, where the fine-tuned parameters are stored and from where they can be loaded at inference step. Scripts also perform a prediction test to check accuracy.

You should get an F1 score of 85 or higher in question answering, and a validation metric higher to 0.92 in SST classification task.

These two layers are susceptible to overflow, so we recommend always using FP32. MXNet takes care of it if you set the following:

General matrix multiply operations don’t present accuracy issues in this model. By default, they’re computed using FP32 accumulation (for more information, see the section Optimizing BERT model performance on MXNET 1.6 and 1.7 in this post), but you can activate the FP16 accumulation setting:

This command exports the model (JSON and parameter files) into the output directory (output_dir/[task_name]), and performs inference using the validation dataset corresponding to each task.

It reports the average latency and throughput.

The second time you run it, you can skip the export step by adding the tag --only_infer and specifying the exported model to use by adding --exported_model followed by the prefix name of the JSON or parameter files.

Optimal latency is achieved on G4 instances with FP16 precision. We recommend adding the flag -dtype float16 and activating MXNET_FC_TRUE_FP16 when performing inference. These flags shouldn’t reduce the final accuracy in your results.

By default, all these scripts use BERT-base (12 transformer-encoder layers). If you want to use BERT-large, use the flag --bert_model bert_24_1024_16 when calling the scripts.

Computationally, the BERT model is mainly dominated by general matrix multiply operations (GEMMs). They represent up to 56% of time consumed when performing inference. The following chart shows the percentage of computational time spent on each operation type performing BERT-base inference (sequence length 128 and batch size 128). 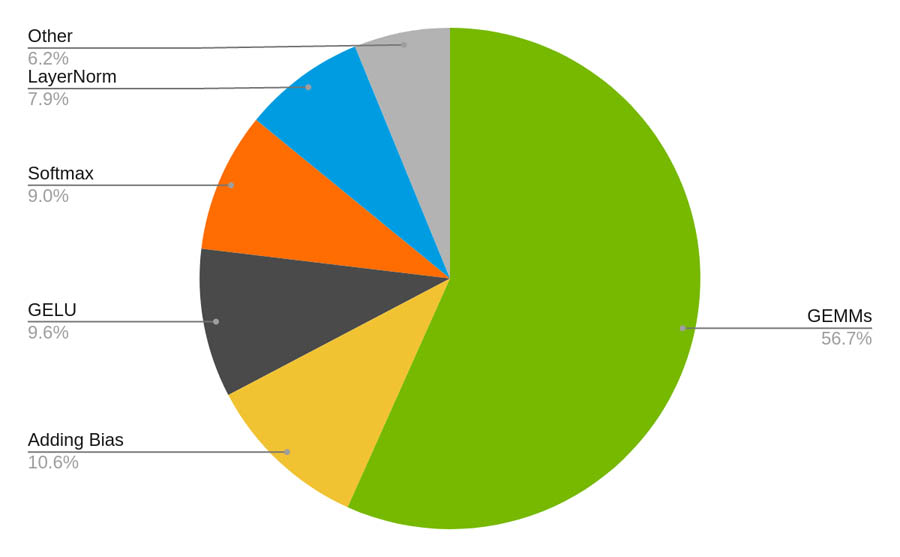 In this section, we discuss optimizing the most computational-consuming operations.

The following table shows the improvement of each optimization. The performance improvements were achieved by the different GPU BERT optimizations implemented on MXNet and GluonNLP, performing a question answering inference task (SQuAD dataset), and using a sequence length of 128. Speedup achieved is shown for different batch sizes.

Although LayerNorm was already optimized for GPUs on MXNet 1.5, the implementation of Softmax was optimized in MXNet 1.6. The new implementation improves inference performance on GPUs by optimizing the device memory accesses and using the CUDA registers and shared memory during reduction operations more efficiently. Additionally, you have the option to apply a max_length mask within the C++ Softmax operator, which removes the need to apply the mask at the Python level.

The addition of bias terms following GEMMs was also optimized. Instead of using an mshadow broadcast summation, a custom CUDA kernel is now attached to the FullyConnected layer, which includes efficient device memory accesses.

The following equation defines the attention mechanism used in the BERT model [2], where Q represents the query, K the key, V the value, and dk the inner dimension of these three matrices:

Three different linear projections (FullyConnected: GEMMs and Bias-Addition) are performed to obtain Q, K, and V from the same input (when the same input is employed, the mechanism is denominated self-attention), but with different weights:

In multi-head attention, many projections and attention functions are applied to the input as the number of heads, augmenting the dimensions of the weights so that each W size is ((NumHeads x ProjectionDim), EmbeddingDim).

All these projections are independent, so we can compute them in parallel within the same operation, producing an output which size is (BatchSize, SeqLength, 3 x NumHeads x ProjectionDim). That is, GluonNLP uses a single FullyConnected layer to compute Q, K, and V.

However, to perform such an operation in cuBLAS, we need to have the batches and heads dimensions contiguous (in order to have a regular pattern to express distance between batches), but that isn’t the case by default (SeqLength dimension is between them). To avoid rearranging Q, K, and V, GluonNLP transposes the input so that its shape is (SeqLength, BatchSize, EmbeddingDim), and Q, K, and V are directly projected into a tensor with shape (SeqLength, BatchSize, 3 x NumHeads x ProjectionDim).

This strategy allows us to compute QKT from a unique joint input tensor with cuBLASGEMMStridedBatched, setting the number of batches to (BatchSize x NumHeads) and the stride to (3 x ProjectionDim). We also use a strided batched GEMM to compute the dot product of V (same stride as before) with the output of the Softmax function. We implemented MXNet operators that deal with this cuBLAS configuration.

Since MXNet 1.7, you can compute completely in FP16 precision GEMMs. By default, when the data type is FP16, MXNet sets cuBLAS to internally use FP32 accumulation. You can now set the environment variable MXNET_FC_TRUE_FP16 to 1 to force MXNet to use FP16 as the cuBLAS internal computation type.

Finally, the feed-forward part of the model, which happens after each transformer layer, uses Gaussian Exponential Linear Unit (GELU) as its activation function. This operation follows a feed-forward FullyConnected operation, which includes bias addition. We use the MXNet functionality of custom graph passes to detach the bias addition from the FullyConnected operation and fuse it with GELU through the pointwise fusion mechanism.

In our custom graph pass for BERT, we also prearrange the weights and bias terms for the multi-head self-attention computation so that we avoid any overhead at runtime. As explained earlier, weights need to be interleaved, and bias terms need to be joint into a unique tensor. We do this before exporting the model. This strategy shows benefits in small batch size cases.

In this post, we presented an efficient solution for performing BERT inference tasks on EC2 G4 GPU instances. We showed how a set of MXNet optimizations boost GPU performance, achieving speeds up to twice as fast in both question answering and classification tasks.

We would like to thank Triston Cao, Murat Guney from NVIDIA, Sandeep Krishnamurthy from Amazon, the Amazon-MXNet team, and the NVIDIA MXNet team for their feedback and support.

Moises Hernandez Fernandez is an AI DevTech Engineer at NVIDIA. He works on accelerating NLP applications on GPUs. Before joining NVIDIA, he was conducting research into the brain connectivity, optimizing the analysis of diffusion MRI using GPUs. Moises received a PhD in Neurosciences from Oxford University.

Haibin Lin is a former Applied Scientist at Amazon Web Services. He works on distributed systems, deep learning, and NLP. He is a PPMC and committer of Apache MXNet, and a major contributor to the GluonNLP toolkit. He has finished his M.S. in Computer Science at Carnegie Mellon University, advised by Andy Pavlo. Prior to that, he has received a B.Eng. in Computer Science from University of Hong Kong and Shanghai Jiao Tong University jointly.

Przemyslaw Tredak is a senior developer technology engineer on the Deep Learning Frameworks team at NVIDIA. He is a committer of Apache MXNet and leads the MXNet team at NVIDIA.

Anish Mohan is a Machine Learning Architect at Nvidia and the technical lead for ML/DL engagements with key Nvidia customers in the greater Seattle region. Before Nvidia, he was at Microsoft’s AI Division, working to develop and deploy AI/ML algorithms and solutions.