Today, a lot of customers are using TensorFlow to train deep learning models for their clickthrough rate in advertising and personalization recommendations in ecommerce. As the behavior of their clients change, they can accumulate large amounts of new data every day. Model iteration is one of a data scientist’s daily jobs, but they face the problem of taking too long to train on large datasets.

Amazon SageMaker is a fully managed machine learning (ML) platform that could help data scientists focus on models instead of infrastructure, with native support for bring-your-own-algorithms and frameworks such as TensorFlow and PyTorch. SageMaker offers flexible distributed training options that adjust to your specific workflows. Because many data scientists may lack experience in the acceleration training process, in this post we show you the factors that matter for fast deep learning model training and the best practices of acceleration training for TensorFlow 1.x on SageMaker. We also have a sample code of DeepFM distributed training on SageMaker on the GitHub repo.

There are many factors you should consider to maximize CPU/GPU utilization when you run your TensorFlow script on SageMaker, such as infrastructure, type of accelerator, distributed training method, data loading method, mixed precision training, and more.

We discuss best practices in the following areas:

Accelerate training on a single instance

When running your TensorFlow script on a single instance, you could choose a computer optimized series such as the Amazon Elastic Compute Cloud (Amazon EC2) C5 series, or an accelerated computing series with multiple GPU in a single instance such as p3.8xlarge, p3.16xlarge, p3dn.24xlarge, and p4d.24xlarge.

Multiple CPUs on a single instance

In this section, we discuss manually setting operators’ parallelism on CPU devices, the tower method, TensorFlow MirroredStrategy, and Horovod.

TensorFlow automatically selects the appropriate number of threads to parallelize the operation calculation in the training process. However, you could set the intra_op threads pool and inter_op parallelism settings provided by TensorFlow and use environment variables of MKL-DNN to set binding for the OS thread. See the following code:

The environment variable KMP_AFFINITY of MKL-DNN is set to granularity=fine,compact,1,0 by default. After setting both intra and inter of TensorFlow to the maximum number of vCPUs of the current instance, the upper limit of CPU usage is almost the same as the number of physical cores of the training instance.

If you set os.environ["KMP_AFFINITY"]= "verbose,disabled", the OS thread isn’t bound to the hardware hyper thread, and CPU usage could exceed the number of physical cores.

Regarding the settings of TensorFlow intra parallelism, TensorFlow inter parallelism, and the number of MKL-DNN threads, different combinations of these three parameters result in different training speeds. Therefore, you need to test each case to find the best combination. A common situation is to set the three parameters (intra_op_parallelism_threads and inter_op_parallelism_threads for TensorFlow, os.environ['OMP_NUM_THREADS'] for MKL-DNN) to half the number of vCPUs (physical core) or the total number of vCPUs.

If you don’t set the CPU device manually, TensorFlow don’t use the tower method to average the gradients, so you don’t need to scale the batch size in such cases.

The following figure shows the ml.c5.18xlarge instance’s CPU utilization with the following configuration:

The CPU usage is higher when using the tower method, and it exceeds the number of physical cores.

When using TensorFlow MirroredStrategy, if you don’t set the CPU device, TensorFlow just uses one CPU as single worker, which is a waste of resources. We recommend manually setting the CPU device, because it will do a reduce operation on /CPU:0, so the /CPU:0 device isn’t used as a replica here. See the following code:

You need to scale batch size when using MirroredStrategy; for example, scale the batch size to a multiple of the number of GPU devices.

For the sub-strategy when you set CPU device, if you don’t set the cross_device_ops parameter in tf.distribute.MirroredStrategy(), TensorFlow uses the ReductionToOneDevice sub-strategy by default. However, if you set HierarchicalCopyAllReduce as the sub-strategy, TensorFlow just does the reduce work on /CPU:0. When you use the TensorFlow dataset API and distribute strategy together, the dataset object should be returned instead of features and labels in function input_fn.

There is a parameter of distribution in the SageMaker Python SDK Estimator API, which you could use to state the Horovod distributed training. SageMaker provisions the infrastructure and runs your script with MPI. See the following code:

When choosing a GPU instance such as ml.p3.8xlarge, you need to pin each GPU for every worker:

Generally, only the primary (Horovod rank 0) saves the checkpoint and model as well as the evaluation operation. You don’t need to scale the batch size when using Horovod. SageMaker offers Pipe mode to stream data from Amazon Simple Storage Service (Amazon S3) into training instances. When you enable Pipe mode, be aware that different workers on the same host need to use different channels to avoid errors. This is because the first worker process reads the FIFO/channel data, and other worker processes on the same instance will hang because they can’t read data from the same FIFO/channel, so Horovod doesn’t work properly. To avoid this issue, set the channels according to the number of workers per instance. At least make sure that different workers on the same host consume different channels; the same channel can be consumed by workers on a different host.

When using Horovod, you may encounter the following error:

The possible cause for this issue is that a certain rank (such as rank 0) works slower or does more jobs than other ranks, and this causes other ranks to wait for a long time. Although rank 0 sometimes has to do more work than other ranks, it should be noted that rank 0 shouldn’t do much for a long time. For example, for the model evaluation on the validation set and saving checkpoints during training, if it’s inevitable that these operations will take a long time, which could cause errors, one workaround is to let all workers do the same work as rank 0 (checkpoints saving, evaluation, and so on).

Data sharding is one of the most important things to consider when using distributed training. You can use TensorFlow dataset.shard() in your script. SageMaker also offers a dataset shard feature in the inputs channel by setting distribution=S3shardbykey in the dataset channel. See the following code:

The following figure shows the result when using Horovod (ml.c5.18xlarge, Horovod + LibSVM + default intra op and inter op setting), which you can compare to the tower method. 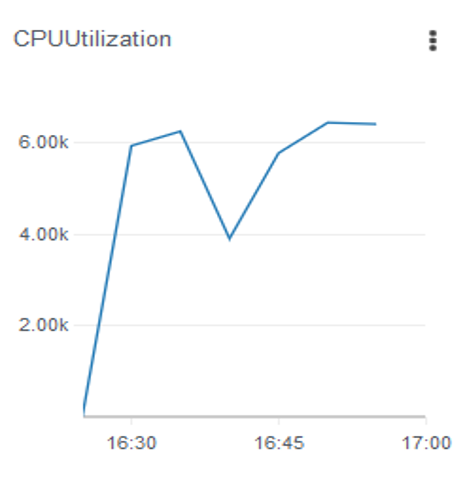 Distributed training with multiple GPUs on a single instance

The tower method here is almost the same as in multi-CPU training. You need to scale the batch size according to the number of GPUs in use.

The default sub-strategy of MirroredStrategy is NcclAllReduce. You need to scale the batch size according to the number of GPUs in use. See the following code:

There are four main methods for using multiple CPUs with multiple instances when enabling distributed training:

SageMaker training jobs support instances that only have one GPU, like the ml.p3.xlarge, ml.g4dn, and ml.g5 series. There are two main methods used in this scenario: parameter servers and Horovod.

For Horovod, just set processes_per_host=1 in the distribution parameter of the SageMaker Python Estimator API.

For parameter servers and the tower method, the code changes are basically the same as the tower method for a single instance with multiple GPUs, and there is no need to manually set the GPU devices.

For Horovod, set processes_per_host in the distribution parameter to the number of GPUs of each training instance. If you use Pipe mode, the number of workers per instance needs to match the number of channels.

In addition to the infrastructure we have discussed, there is another important thing to consider: the data pipeline. A data pipeline refers to how you load data and transform data before it feeds into neural networks. CPU is used to prepare data, whereas GPU is used to calculate the data from CPU. Because GPU is an expensive resource, more GPU idle time is inefficient; a good data pipeline in your training job could improve GPU and CPU utilization.

When you’re trying to optimize your TensorFlow data input pipeline, consider the API order used in TensorFlow datasets, the training data size (a lot of small files or several large files), batch size, and so on.

Let’s look at the interaction between GPU and CPU during training. The following figures compare interactions with and without a pipeline.

TensorFlow provides a transform API related to dataset formats, and the order of the transformation API in TensorFlow affects training speed a lot. The best order of calling the TensorFlow dataset API needs to be tested. The following are some basic principles:

For training on CPU instances, setting parallelism of intra op, inter op, and the environment variable of MKL-DNN is a good starting point.

When you start your deep learning model training in SageMaker, consider the following tips to achieve a faster training speed:

Keep in mind the following advice:

We also have a code sample in the GitHub repo, where we show two samples of DeepFM distributed training on SageMaker. One is a TensorFlow parameter server on CPU instances, the other one is Horovod on GPU instances.

Yuhui Liang is a Sr. Machine Learning Solutions Architect. He’s focused on the promotion and application of machine learning, and deeply involved in many customers’ machine learning projects. He has a rich experience in deep learning distributed training, recommendation systems, and computational advertising.

Shishuai Wang is a Sr. Machine Learning Solutions Architect. He works with AWS customers to help them adopt machine learning on a large scale. He enjoys watching movies and traveling around the world.