With the release of Core ML by Apple at WWDC 2017, iOS, macOS, watchOS and tvOS developers can now easily integrate a machine learning model into their app. This enables developers to bring intelligent new features to users with just a few lines of code. Core ML makes machine learning more accessible to mobile developers. It also enables rapid prototyping and the use of different sensors (like the camera, GPS, etc.) to create more powerful apps than ever.

Members of the MXNet community, including contributors from Apple and Amazon Web Services (AWS), have collaborated to produce a tool that converts machine learning models built using MXNet to Core ML format. This tool makes it easy for developers to build apps powered by machine learning for Apple devices. With this conversion tool, you now have a fast pipeline for your deep-learning-enabled applications. You can move from scalable and efficient distributed model training in the AWS Cloud using MXNet to fast run time inference on Apple devices.

To support the release of the converter tool we decided to build a cool iOS app. We were inspired by a previous AWS AI Blog post, Estimating the Location of Images Using MXNet and Multimedia Commons Dataset on AWS EC2, that showcases the LocationNet model to predict the location where pictures were taken.

In this blog post, we explain how to set up an environment to convert MXNet models into Core ML, convert an existing model, and then import it into a sample iOS app written in Swift. The iOS app feeds a picture to the model, which predicts the location where that image was taken, and shows it on an interactive map. For performance, we recommend that you run the app on a physical iOS device (e.g., an iPhone) installed with iOS 11 beta, but you can also try it on the Simulator that comes with the Xcode 9.0 beta.

Note that at the time of writing Xcode 9, iOS 11, and Core ML are still in beta and you need an Apple Developer Program account to download Xcode and iOS. However, after they are all released publicly later this year, you can use the App Store on your Mac and Software Update on your iOS device to obtain them.

Installation of MXNet and the converter tool

The tool was installed and tested on the macOS High Sierra 10.13 beta 8. However, as long as you don’t run inferences on a Core ML model on your Mac, you can run the converter on macOS El Capitan (10.11) and later.

To run the converter tool, you need to have Python 2.7 installed.

Run the following command to install the MXNet framework, and the mxnet-to-coreml tool:

Conversion of the MXNet model

The LocationNet model was trained using MXNet on a single p2.16xlarge Amazon EC2 instance with geo-tagged images from the AWS Multimedia Commons dataset. It is shared publicly on the MXNet Model Zoo.

As with any MXNet model, LocationNet has two parts:

Go ahead and download the .json model definition and the .params model parameters files stored on Amazon S3.

In addition, you will need to download the classes file grids.txt from the GitHub repository, which contains the geographic cells used for training the model. It was created with the training data using Google’s S2 Geometry Library. Each line in this text file is in the form of S2 Cell Token, Latitude, Longitude (e.g., 8644b594 30.2835162512 -97.7271641272). The Swift code in the iOS app will drop the S2 Cell Token information and only use the coordinates.

As explained on the GitHub repository for the conversion tool, we will now convert the model.

After you have everything downloaded in the same directory, run this command:

Internally, the model is first loaded by MXNet recreating the entire symbolic graph in memory. The converter walks through this symbolic graph converting each operator into its Core ML equivalent. Some of the supplied arguments to the converter are used by MXNet to generate the graph, while others are used by Core ML either to pre-process the input (before passing it to the neural network) or to process the output of the neural network in a particular way.

You should see the converter tool processing the multiple layers of the model, and then confirm SUCCESS with the name of the file generated. You will import the resulting file RN1015k500.mlmodel into your Xcode project in later stages. 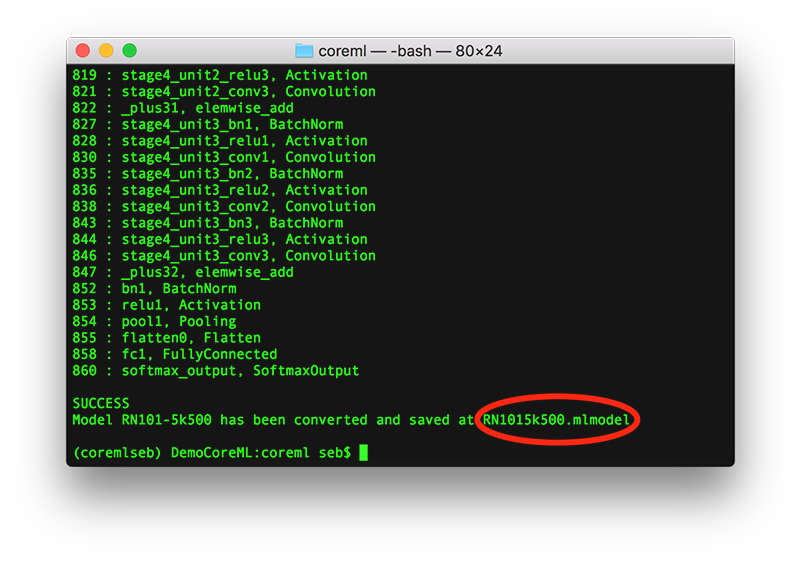 With Xcode installed, if you double-click this model file, you can get more information about it, such as its size, name, and parameters, which would usually be used within your Swift code: 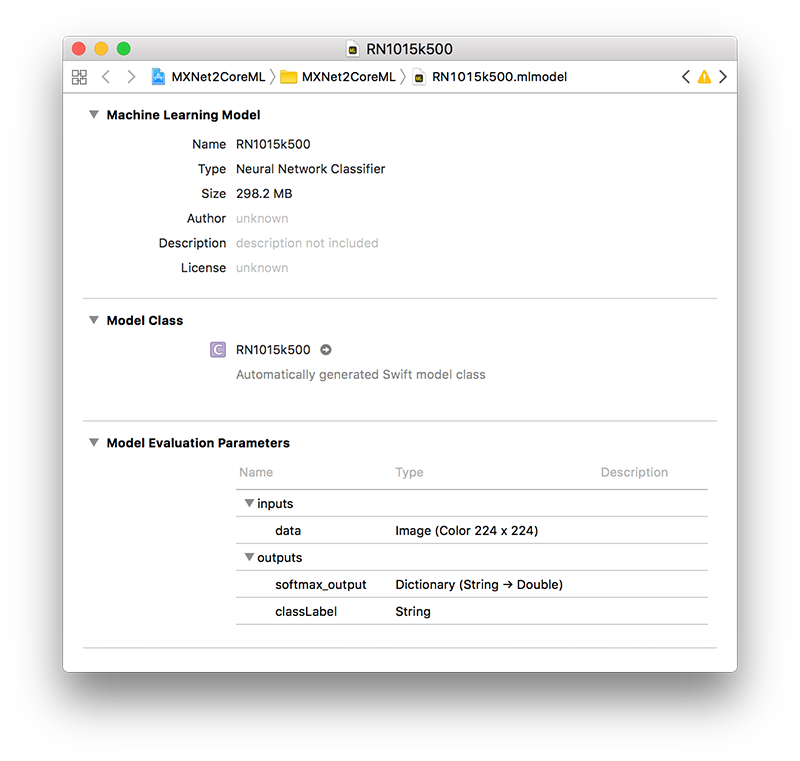 Download and configure the code for the iOS app

We decided to use Apple’s new Vision framework to facilitate the use of Core ML with images because it automatically converts an image to the format and size that the Core ML model expects. Vision provides solutions to computer vision challenges through a consistent interface, and its features include face tracking, face detection, landmarks, text detection, rectangle detection, barcode detection, object tracking, and image registration.

We used the following resources to get started:

Now let’s get going with building the app!

Go ahead and download the iOS sample app source code from this GitHub repository: MXNet2CoreML_iOS_sample_app.

Drag and drop the file RN1015k500.mlmodel that you generated earlier into your Xcode project navigator as shown on the right in the following picture, and make sure to tick the Target Membership checkbox for the current project.

In case you didn’t install the converter tool and you just want to try the iOS app, we uploaded the Core ML model RN1015k500.mlmodel here. Download the file then drag and drop it to the Xcode project navigator. 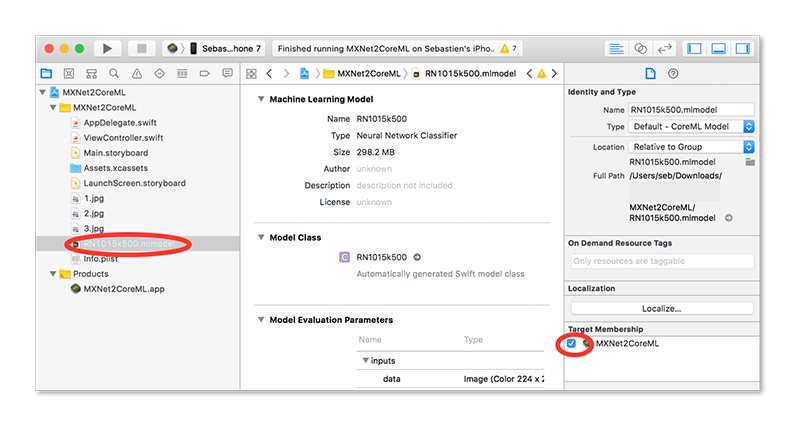 Run the app, see some magic

As stated previously, we recommend that you test the app on a physical device running iOS 11 (still in beta at the time of writing).

You can also run it in the Xcode Simulator but the performance and animations will not be great, especially if you pan or zoom in the map area.

Remember to sign the app with your Team account if you decide to run it on a physical iOS device, as shown in the following screenshot.

As we said in our preliminary notes, you will need an Apple Developer account for this to work. 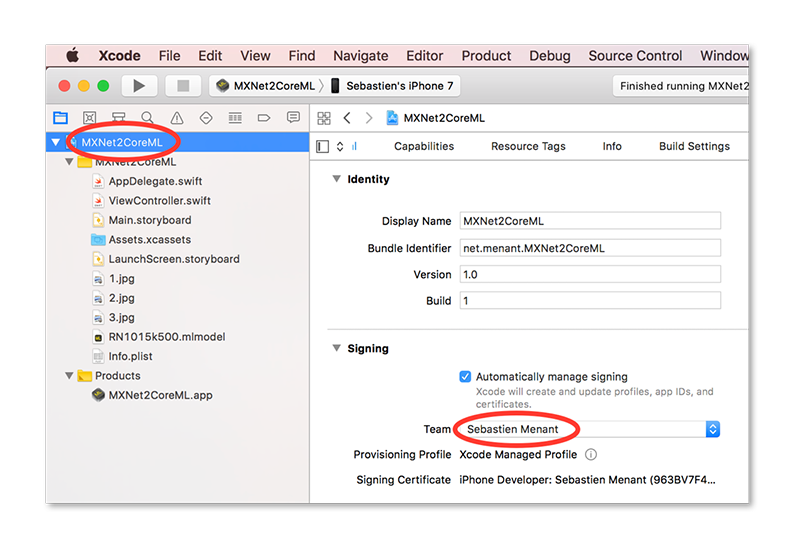 Press play to build your app and run it on the iPhone.

The app will install on the iPhone and you should see the following screen. 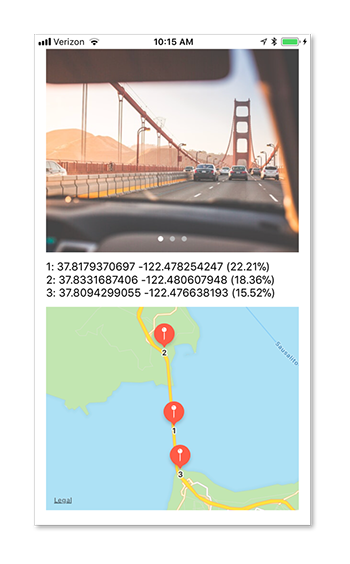 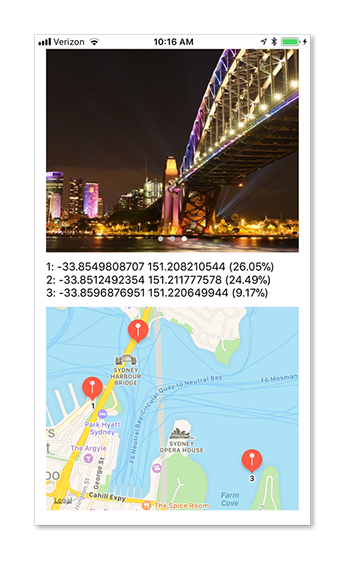 As this blog post demonstrates, you can now build and train sophisticated machine learning models on AWS using MXNet, convert them to Core ML format with the MXNet to Core ML converter tool, and quickly import them into Xcode. Now you can start experimenting and creating new amazing capabilities in your apps for iOS or other Apple devices.

If you want to try the app with your own picture saved on your computer, just rename your picture 1.jpg, delete the existing file from the Xcode project navigator, and drag and drop it. We discussed how to do this in the section on the Core ML model.

You could also develop the sample app a bit further by implementing a camera function that allows you to take pictures within the app or load from the camera roll, and perform real-time location prediction on images you have already taken or would take on the spot.

We are excited to discover the different ways this blog post will inspire you.  If you have questions, comments or suggestions, please post them in the Comments section below.

Learn how to use a pre-trained model created with Apache MXNet to estimate the location of images on AWS EC2.

Sebastien Menant is a Solutions Architect for Amazon Web Services. He started working with enterprise customers in Sydney and now helps customers in the San Francisco Bay Area innovate on AWS. He previously worked at Apple where he grew his interest for iOS software development and the Swift programming language.

Pracheer Gupta is a member of the AWS Deep Learning team in Palo Alto. He is currently a technical lead for Apache MXNet applications, helping customers build intelligent applications on top of MXNet. In the past, he worked on building a Paxos-based distributed lock manager, which became the foundational building block for much of AWS. In his spare time, he loves reading up on history and psychology.