In our previous post, “Securely scale multi-account architecture with AWS Network Firewall and AWS Control Tower”, we described how AWS Network Firewall can be implemented in an AWS Control Tower environment. AWS Network Firewall provides a stateful, managed firewall with rules to filter and block network and application layer traffic coming to your applications. Centralized deployment lets you ensure that all of the VPC traffic across multiple AWS accounts traverses through the centralized inspection point. However, network firewall does not have visibility on DNS queries made through the Route 53 Resolver. Amazon Route 53 DNS Firewall comes to the rescue to ensure that network security is comprehensive and handles the DNS query traffic.

In this post, we extend our solution of AWS Network Firewall with Control Tower to include a centralized deployment of DNS firewall rules that can be applied to existing and new VPCs created with the Control Tower environment. This approach lets network administrators and developers ensure security at the DNS layer with minimal operational overhead.

The following figure shows a multi-account structure that was created as part of the solution with some of the Route 53 DNS firewall components that are added as part of this post: 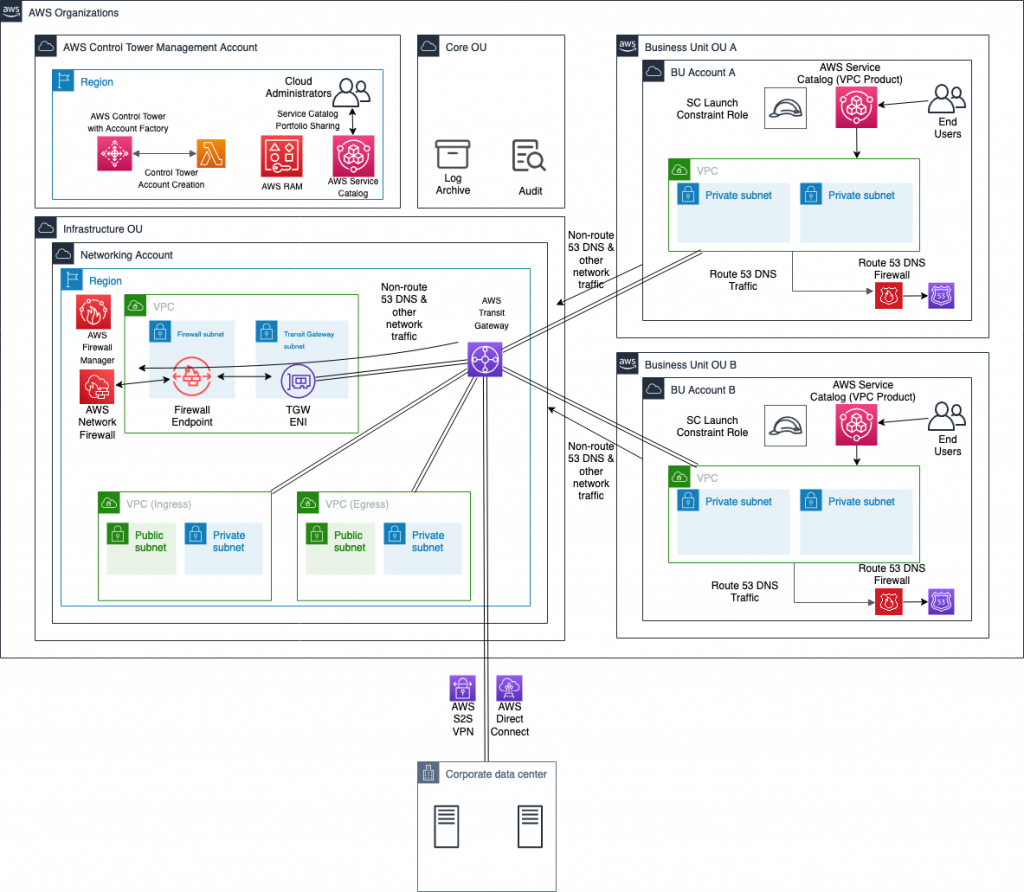 While most of the solution components, such as transit gateway and network firewall, are part of the previous solution, they are explained to ensure completeness. AWS Control Tower is set up in the management account. It creates a security OU that includes log archive and audit accounts. Based on the landing zone best practice, a separate infrastructure OU contains the networking account. This account hosts all of the centralized networking resources that support the networking requirements of the multi-account, multi-VPC architecture.

This approach lets network administrators govern and control networking requirements from a central location (the networking account). You can create other OUs and AWS accounts using AWS Control Tower, such as OU A with account A and OU B with account B through Account Factory, as shown in the previous figure. This makes it possible to consistently and automatically apply the AWS Control Tower guardrails and security baseline across these new accounts. This solution uses Account Factory and AWS Identity and Access Management (IAM) roles created by AWS Control Tower for the automation.

When the solution is deployed, the following components are created as part of the architecture. This is in addition to the solution components from the previous post which were comprised of a centralized deployment of AWS Network Firewall in the Networking account, AWS Lambda functions for automation, and AWS Service Catalog VPC product.

The architecture lets any traffic coming from VPCs be routed to the AWS Network Firewall first. The traffic is inspected before it goes to its destination, which could be another VPC, on-premises network, or internet through the egress VPC. DNS queries could be sent to non-Route 53 resolvers, such as Active Directory or other third-party DNS servers. In that case, having a Network Firewall stateful rule with a blocked domain list ensures that HTTP(S) traffic to these domains is blocked even though DNS queries are resolved. If those DNS queries are made to a Route 53 Resolver of the VPC through the “.2 resolver” or through resolver endpoints, then Route 53 DNS Firewall will block those queries. This ensures comprehensive security for your environment from malicious or unallowed domains.

The solution presented in this post ensures that this is pervasive across all of the VPCs in all of the accounts of Control Tower, as well as new AWS accounts created through the Account Factory. 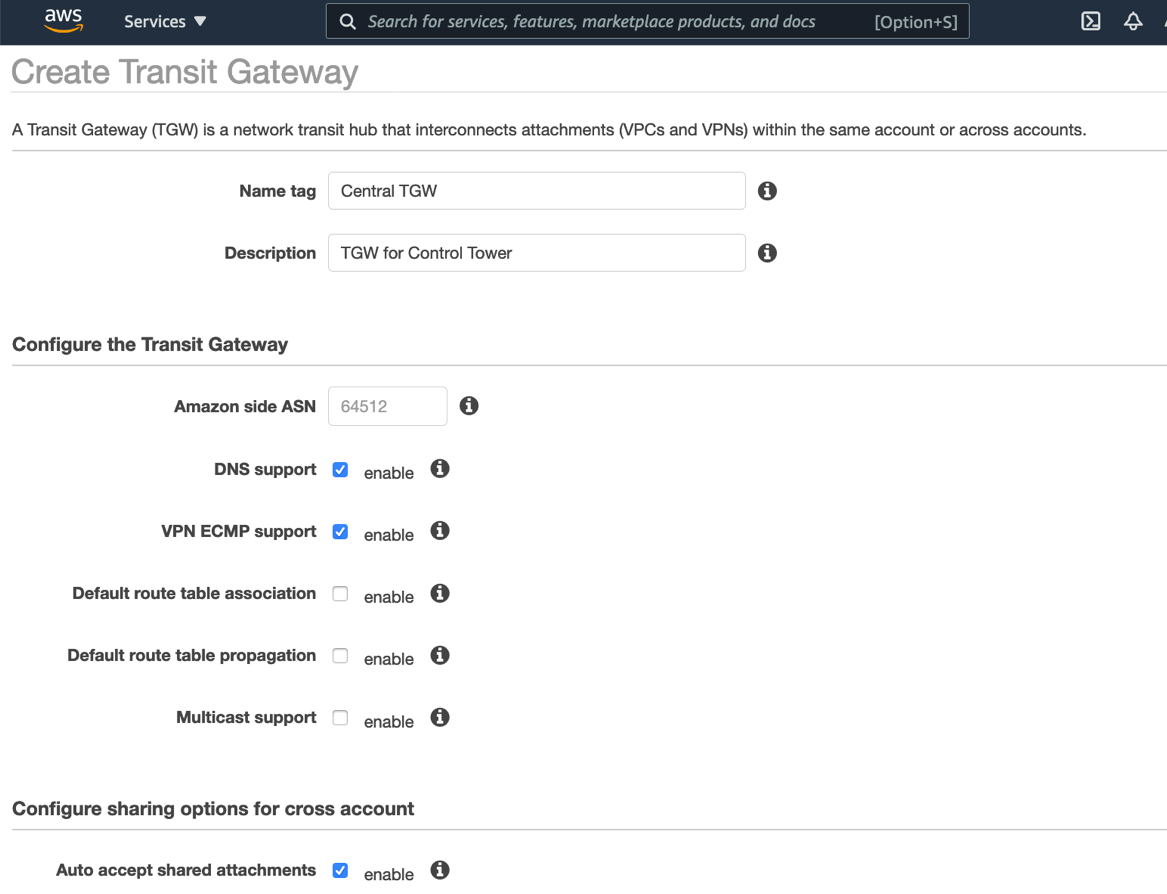 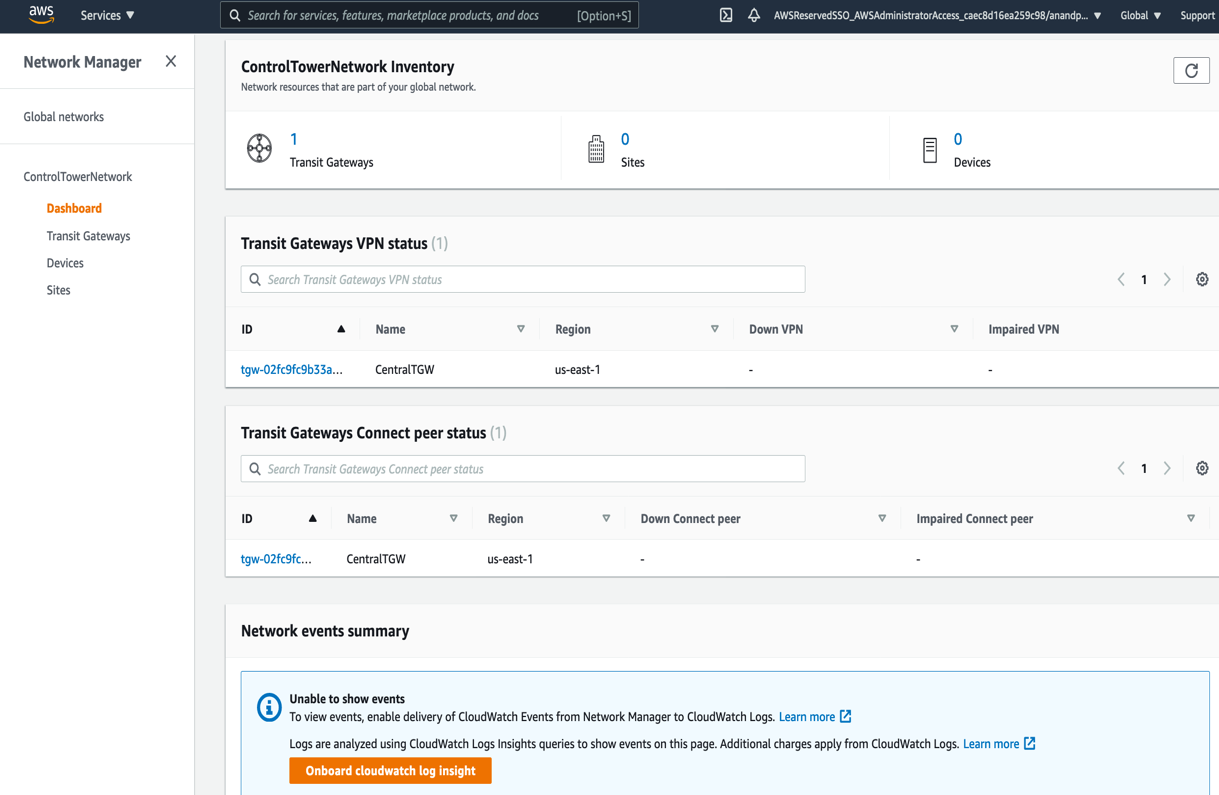 This allows events from AWS Transit Gateway, such as attachment, creation, or deletion, and route table changes, to be sent as events to CloudWatch Events. 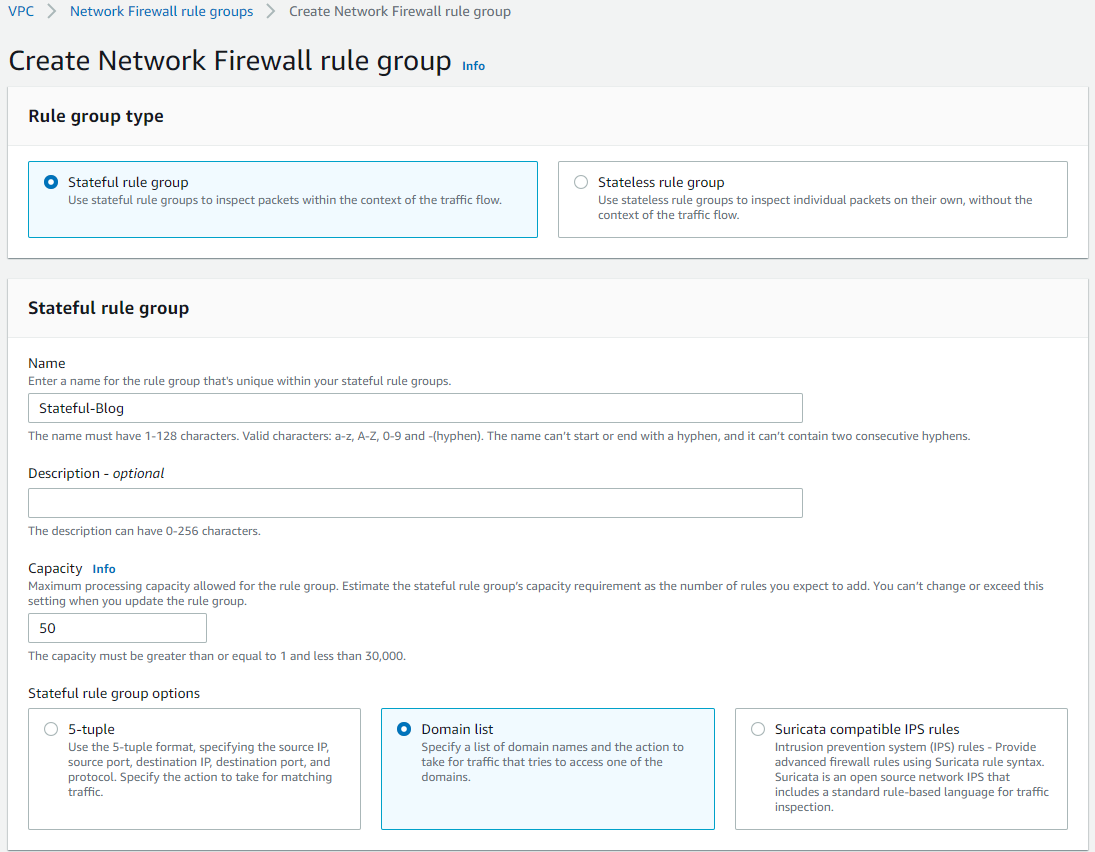 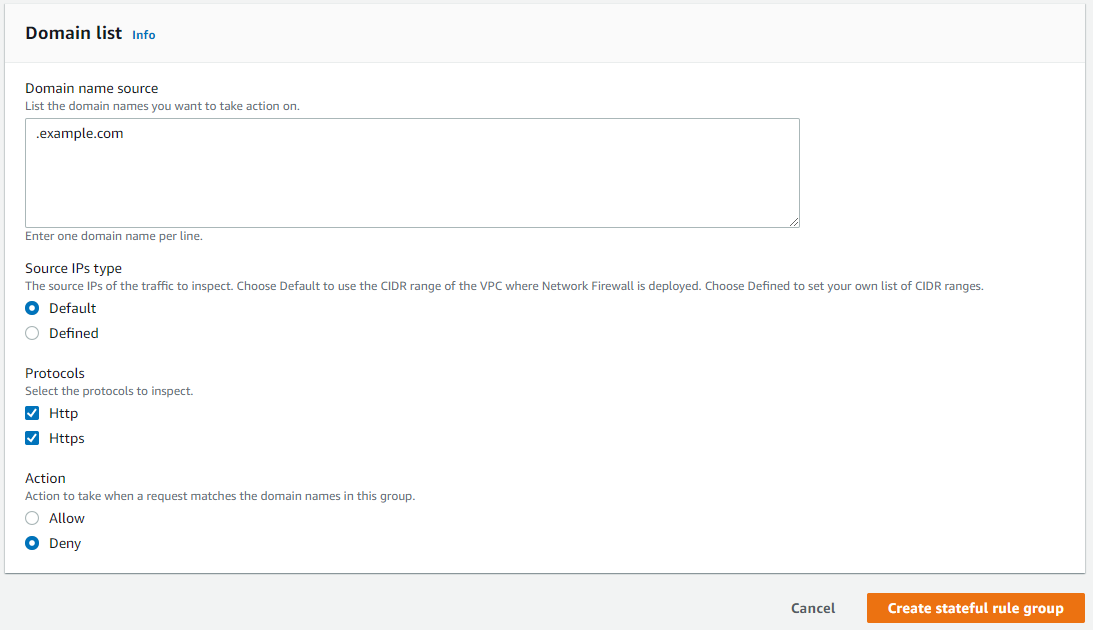 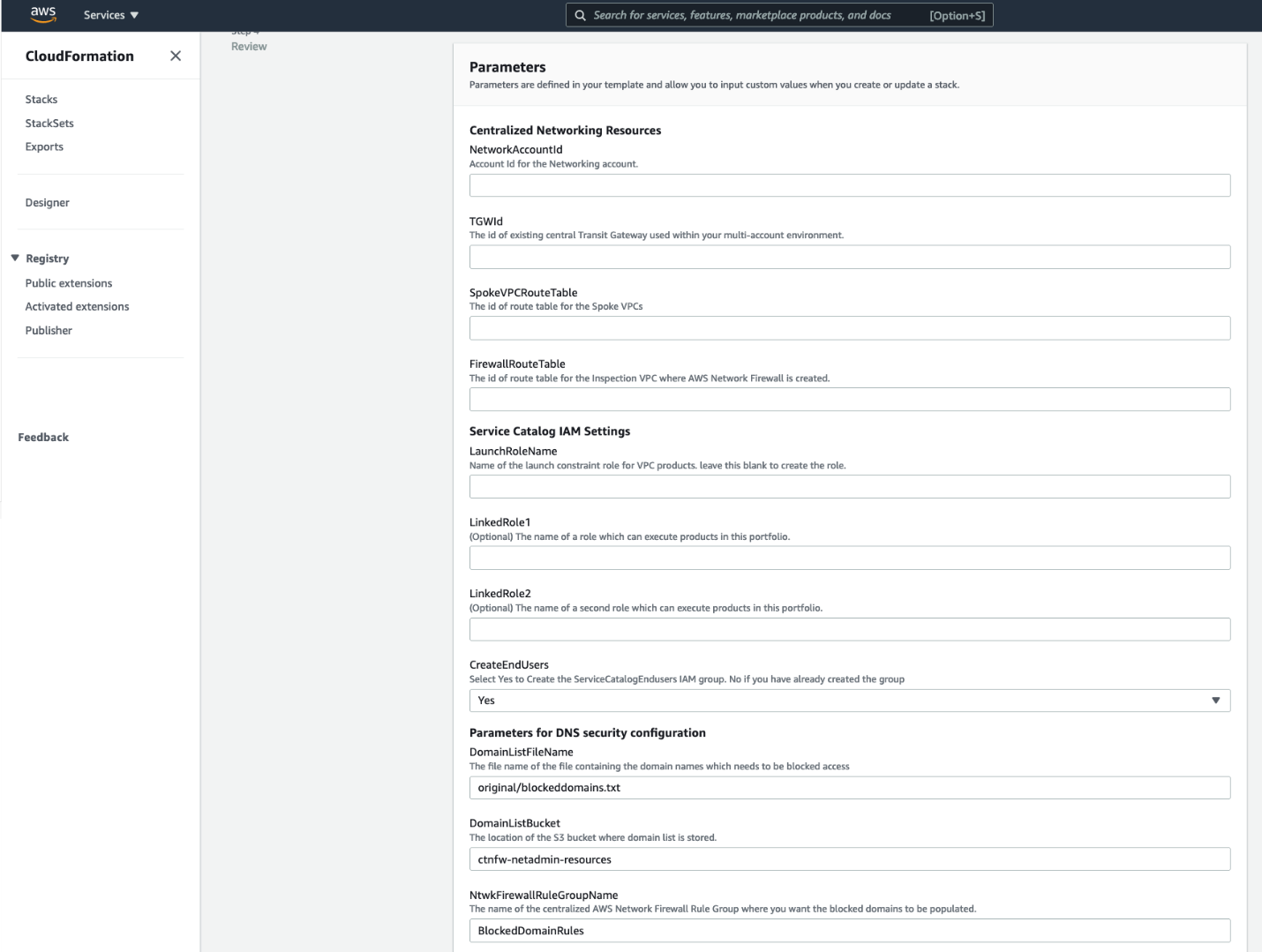 The input parameters required are explained as follows, and shown in the previous figure.

TGWId – Identifier of the centralized transit gateway created in Step 2.

SpokeVPCRouteTable – Identifier of the transit gateway route table used for associating spoke VPCs. This is created in Step 2.

FirewallRouteTable – Identifier of the transit gateway route table to which Inspection VPC is associated. This is created in Step 2.

LaunchRoleName – This is the name of the service catalog launch constraint role. If you have one in your environment, then you can specify that or leave the field blank. When this is left blank, CloudFormation will create a new one.

LinkedRole1 – Name of the role that can run products in this portfolio.

LinkedRole2 – Name of the role that can run products in this portfolio.

CreateEndUsers – Select Yes to create ServiceCatalogEndUsers IAM group. Select No if you already have this IAM group in your AWS environment.

DomainListBucket: The Amazon S3 bucket in Networking account that stores the list of domains to be blocked. Specify the name of the S3 bucket to create.

DomainListFileName: The name of the file that stores the list of domains including the path prefix. The default value is original/blockeddomains.txt. The Amazon S3 trigger relies on the path original/ and the file suffix .txt. The only part of this parameter that supports customization is the file name.

NtwkFirewallRuleGroupName: The name of the network firewall stateful rule group where the domain list will be populated. This rule was created in Step 6. 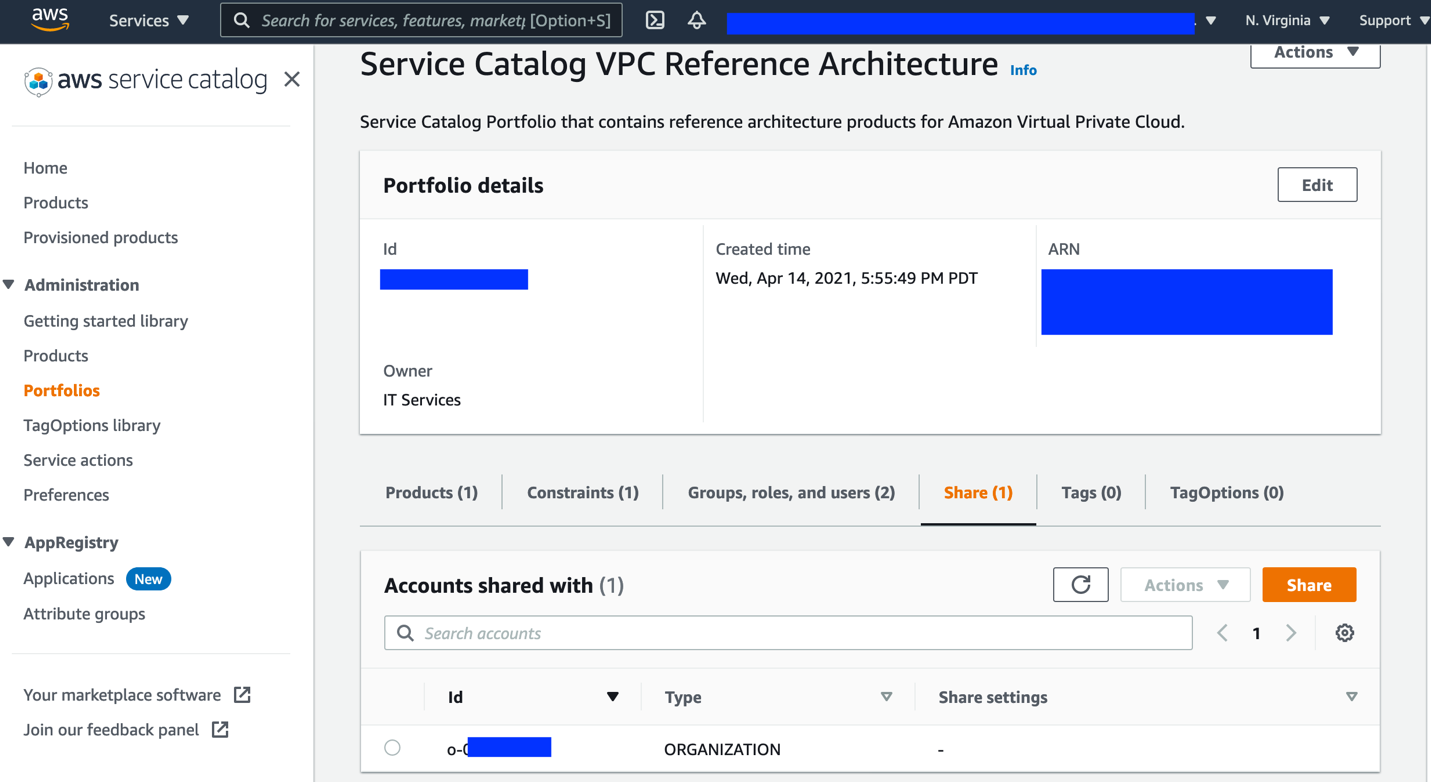 The following figure shows the sequence of events when the cloud administrator updates the blocked domain list in the Amazon S3 bucket. 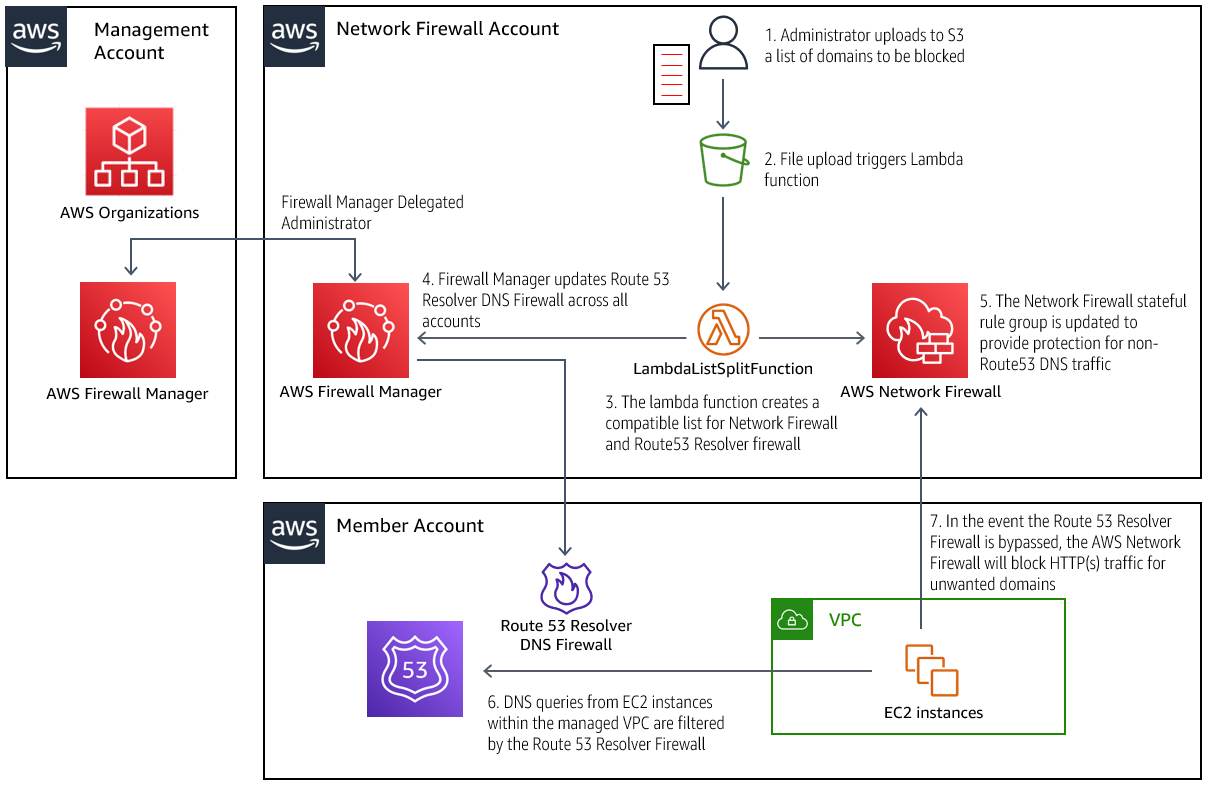 Follow the steps below to test the functionality of domain list blocking in DNS firewall and Network Firewall. 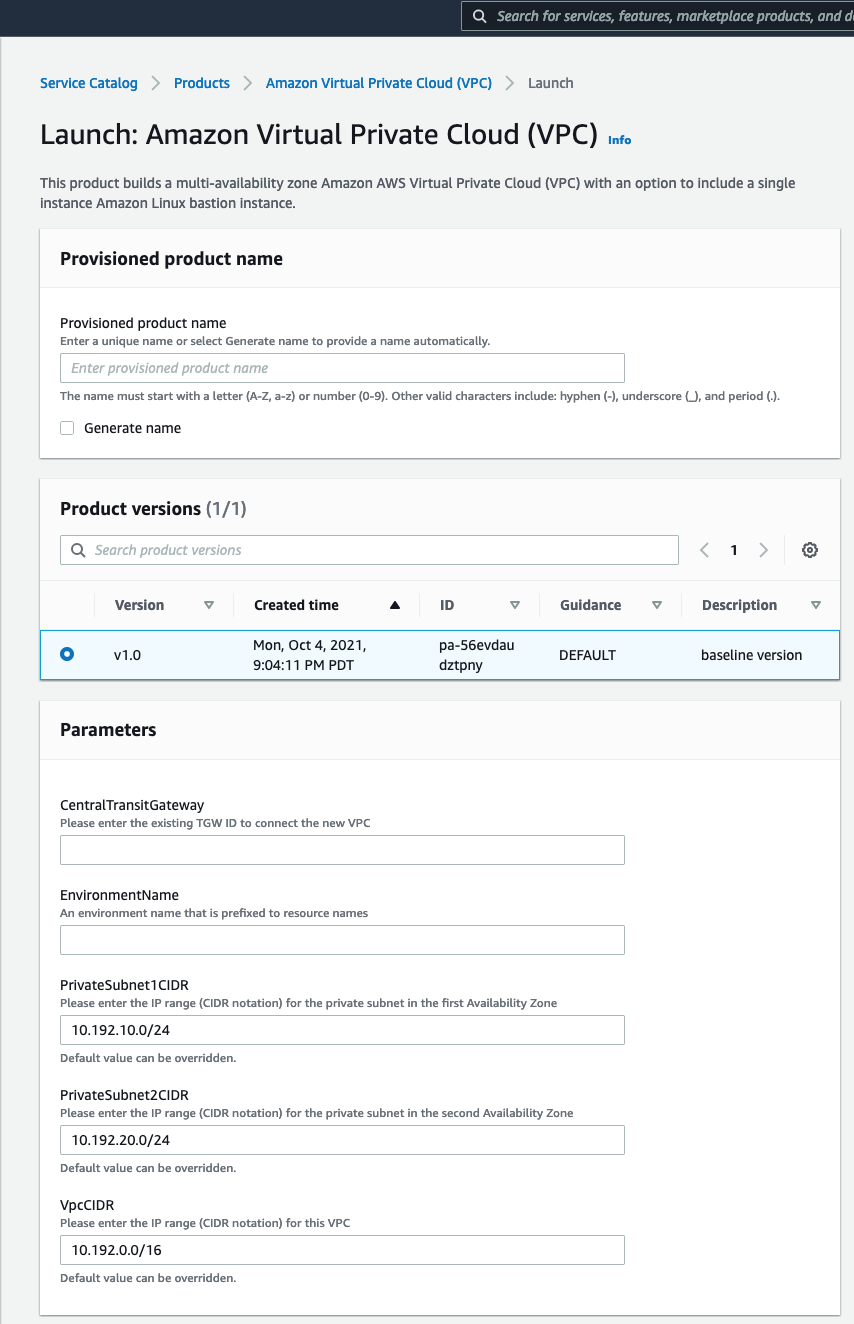 This lets you create a VPC that connects to your centralized transit gateway and with the required route table setup. The VPC CIDR range selected for the Backend VPC must be added to the stateful rule group created earlier. The “Source IP type” parameter in the stateful rule must be changed to “defined”, which will prompt for a list of CIDR ranges. Please see the documentation for more details.

Testing how DNS queries are blocked by the DNS firewall

It’s important to apply and adapt to the specific requirements of your environment. Consider the following: