In this post, we’ll look at how you can analyze for stale rules in the security groups and remove them based on usage and duration metrics. We’ll also look at a serverless solution leveraging Amazon Simple Storage Service (Amazon S3), AWS Glue, and VPC Flow Logs, as well as visualize the results in Amazon QuickSight. This solution will help parse the VPC Flow Logs and relate it to a particular rule of the security group. It also tracks the usage over time so that it’s easy to track the rules that are frequently used as well as clean up the stale ones.

You should follow these best practices when working with security groups:

The solution assumes that VPC Flow Logs are enabled and created with Amazon S3 as the destination type. This is based on a serverless architecture that leverages AWS Step Functions to run four Glue Jobs at a scheduled cron interval. The first Glue job parses all of the security groups present in an account and stores them in an Amazon DynamoDB table. The second Glue Job runs Amazon Athena queries to parse the VPC Flow Logs stored in an S3 bucket. The third Glue job computes the usage metrics of rules in security group and stores the results in another DynamoDB table. The parsed data is visualized in QuickSight to generate heat maps to identify which ports/protocols are frequently used.

Finally, the fourth Glue job is used to send an email notification using Amazon Simple Email Service (Amazon SES) client with usage metrics of the security group rule. You can remove these un-used security group rules to meet compliance requirements. This architecture is shown in the following figure. 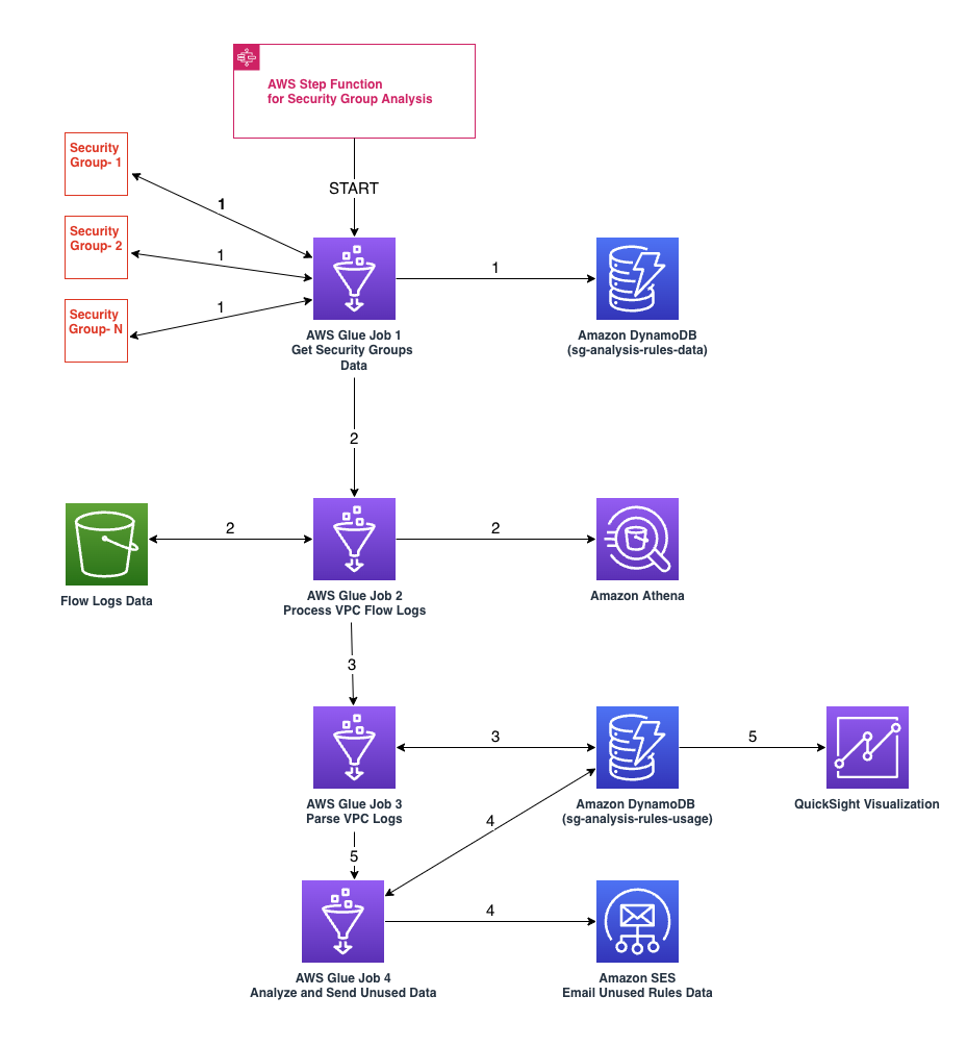 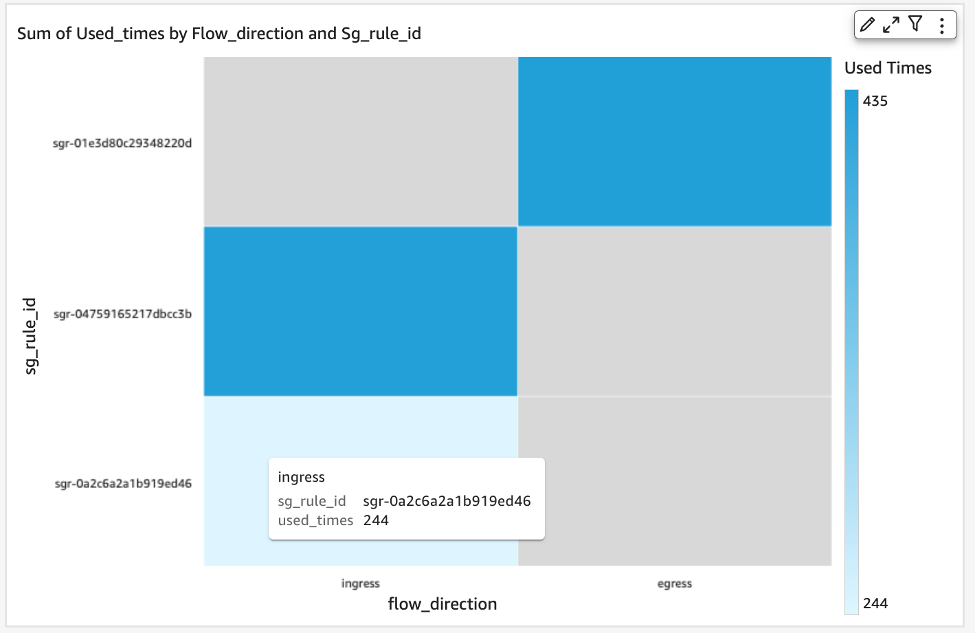 Figure 2: Visualization of varying color density of security group rules based on its usage count

Our solution deployment is comprised of a Step Function (with template definition of five Glue jobs) and a QuickSight visualization that consist of components such as Dataset, Analyses, and Dashboard.

The code for the solution deployment can be found in the GitHub repository. 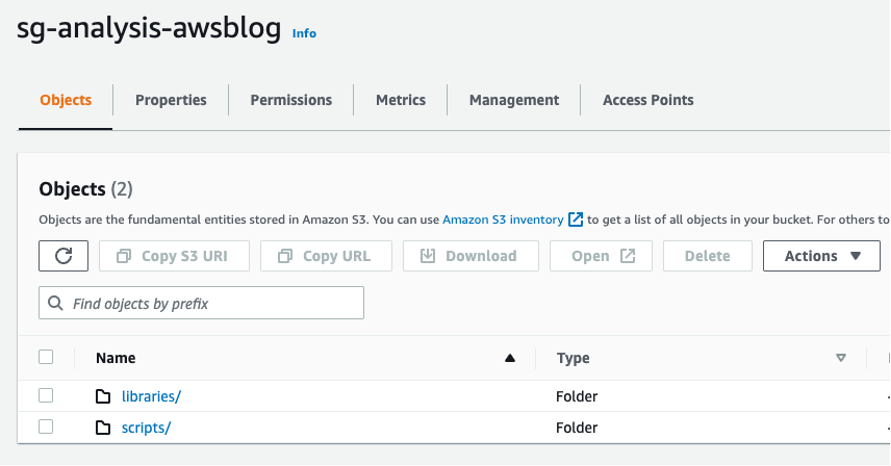 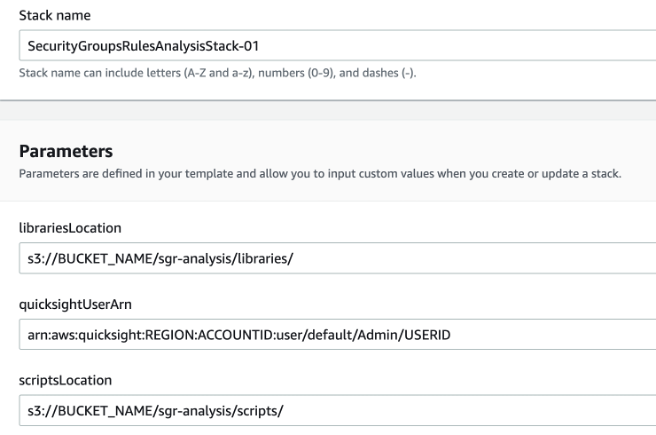 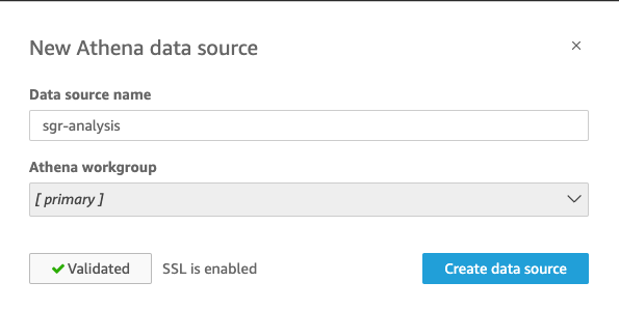 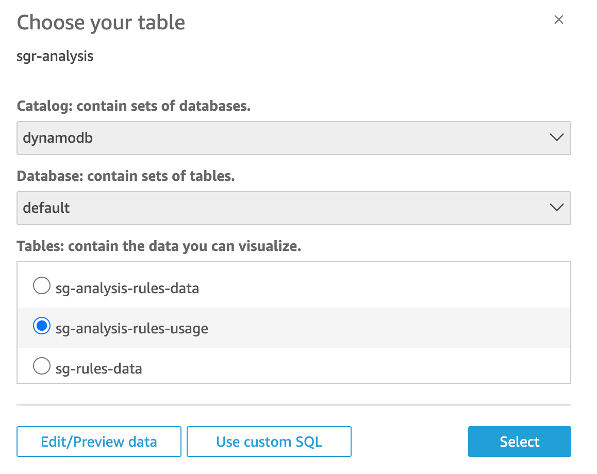 Figure 7: Selecting the sg-analysis-rules-usage table from the DynamoDB catalog 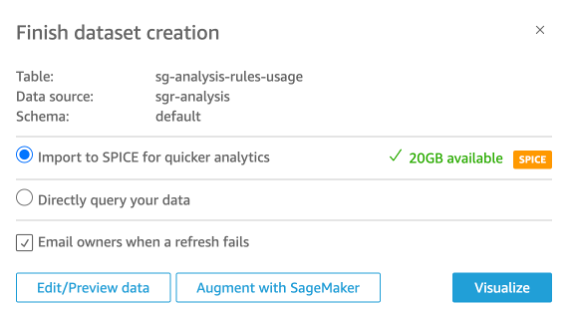 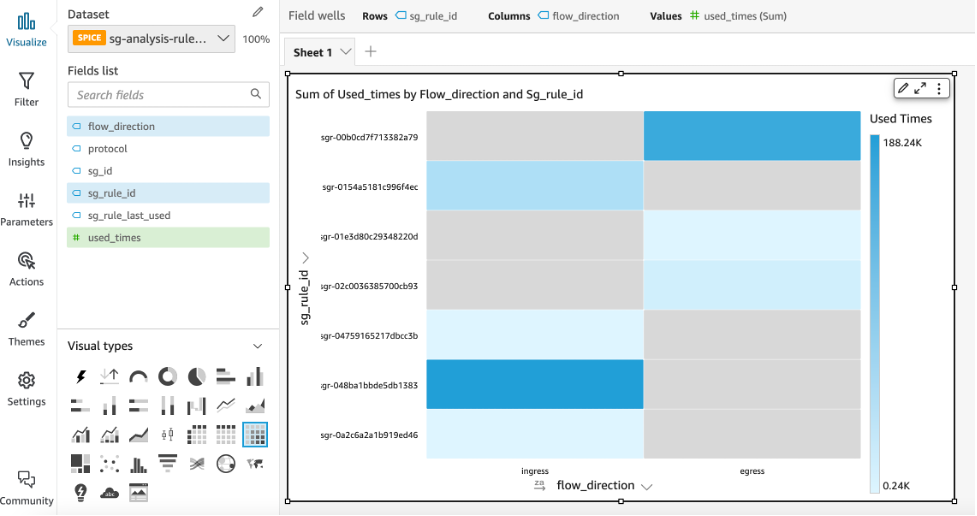 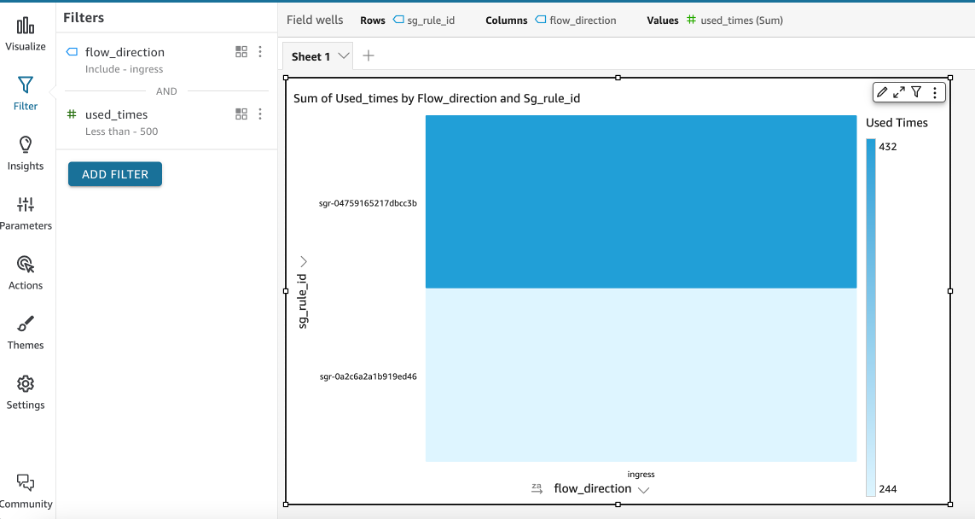 Follow these instructions to clean up the provisioned resources. Leaving resources that you no longer need in your AWS account may incur extra charges. Performing these steps will delete the Serverless infrastructure that was created as part of deploying the solution discussed in this post.

You can also delete the stack using the CloudFormation Console:

In this post, we’ve shown how to determine un-used security group rules present in an AWS account leveraging a serverless architecture based on Step Functions and AWS Glue Jobs. The solution provided visualizations of the usage metric in QuickSight and also sends out automated email notifications on un-used security group rules in an account. We removed the undifferentiated heavy lifting for setting up infrastructure by providing CloudFormation templates.

Shiva Vaidyanathan is a Senior Cloud Infrastructure Architect at AWS. He provides technical guidance, design and lead implementation projects to customers ensuring their success on AWS. He works towards making cloud networking simpler for everyone. Prior to joining AWS, he has worked on several NSF funded research initiatives on how to perform secure computing in public cloud infrastructures. He holds a MS in Computer Science from Rutgers University and a MS in Electrical Engineering from New York University.

Sundar Shanmugam is a Cloud Infrastructure Architect at AWS, where he helps customers to design, implement scalable and resilient solutions, migrate workloads and also adopt DevOps methodologies. He holds a Bachelor’s in Computer Science from Pondicherry University and loves to play/watch cricket during his spare time.