Update 10/13/22: Added walkthrough with the AWS Management console and link to code in CDK and Terraform.

One of the most common ways that customers connect securely to AWS from on premises is by using the AWS Site-to-Site VPN managed IPSec VPN solution. One key benefit our customers look for when using the service is not having to manage 3rd-party or custom VPN solutions built using EC2 instances. The native service is already built to be highly-available with two tunnels in two different Availability Zones and has native integration with AWS Transit Gateway (via a VPN attachment) which allows customers to scale the connectivity to multiple VPCs with a single Transit Gateway-based VPN connection.

The typical way to create native IPSec VPN connections is to use the Internet as a transport, however some customers create the IPSec VPNs using AWS Direct Connect. Why? Remember that Direct Connect is a private, dedicated connection from on-premises environments to AWS (unlike the Internet), but it is not encrypted. For some customers, security and compliance regulations require encryption at layer 2 or 3 for any communication using this dedicated line. Since April 2021 Direct Connect supports IEEE 802.1AE MAC Security Standard (MACsec) encryption for 10Gbps and 100Gbps Dedicated connections. This makes Site-to-Site VPNs the best way to achieve encryption for 1Gbps and sub-1Gbps Direct Connect connections. Previously, the only way to create Site-to-Site VPN connections over Direct Connect was by using Public VIFs and connecting to the service’s public endpoint. However, for many of our customers, the use of public IPs introduces several challenges:

That’s why we are announcing Private IP VPN, a new feature that provides customers the ability to deploy AWS Site-to-Site VPN connections over Direct Connect using private IP addresses (RFC1918). With this feature, customers can encrypt traffic between their on-premises networks and AWS via Direct Connect connections without the need for public IP addresses, thus enabling enhanced security and network privacy at the same time. Private IP VPN is deployed on top of Transit VIFs, so it allows you to use AWS Transit Gateway for centralized management of customers’ Virtual Private Clouds (VPCs) and connections to the on-premises networks in a more secured, private and scalable manner.

Following are some of the most typical use-cases for this feature:

How does this feature work?

A Private IP VPN connection requires a Direct Connect gateway and a Transit VIF as the underlying transport. The Private IP VPN attachment is then associated with the appropriate Direct Connect gateway attachment on the Transit Gateway – as can be seen in Figure 1. Each Private IP VPN connection comprises of two IPSec tunnels that encrypt all network traffic over those tunnels. You can assign private IP addresses to both ends of the IPSec tunnels (Transit Gateway and on-premises router).

Figure 1 shows the use case where you want to encrypt all the traffic over the Direct Connect link. In this example, only the Site-to-Site VPN attachment is associated and propagated to the Transit Gateway Route Table. You need to ensure that the traffic from the on-premises router is forwarded to AWS via the VPN tunnels. With this configuration, both VPCs will be able to communicate between each other, and with the on-premises network via the Site-to-Site VPN connection.

As mentioned before, another possible scenario is to use Private IP VPNs for traffic segmentation. In this particular use case, you can extend different on-premises VRFs to the Transit Gateway by creating one Site-to-Site Private IP VPN connection per VRF. In the Transit Gateway, one Route Table per environment is used to segment, and associate each VPN connection to a different Route Table. In Figure 2 you can see the Production and Non-Production Route Tables. Production VPC and Production VPN attachments are associated and propagated to the Production Route Table (same with the Non-Production attachments). The on-premises router simply needs to be configured to forward each VRF to the corresponding Site-to-Site VPN connection.

Figure 3. Encrypted and unencrypted traffic over a Direct Connect connection

You can create an AWS Site-to-Site Private IP VPN using the AWS Management Console or Command Line Interface (CLI). In this blog post, we’ll show both options. We’ll start with our Direct Connect connection and Transit VIF already created. The values used when creating the different resources will follow the ones shown in Figure 1. For the CLI steps, we’ll be using the AWS CLI v2 and jq to create the relevant AWS components. 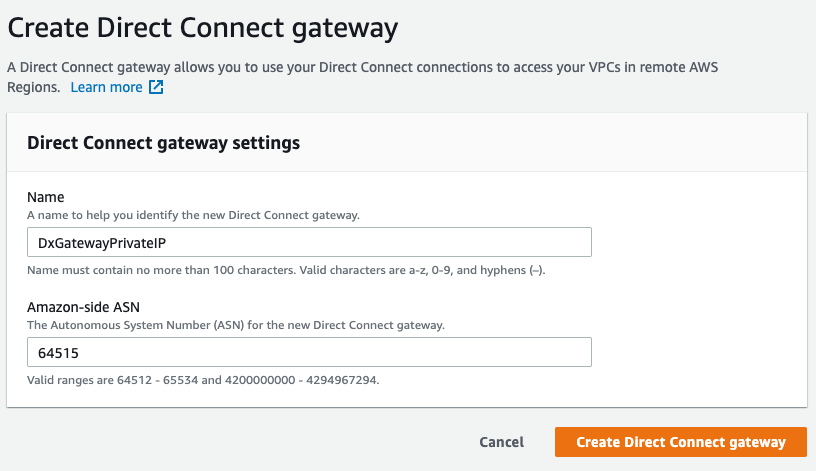 Next, we create the AWS Transit Gateway. To support the creation of the Private IP VPN, we also need to configure the Transit Gateway VPC CIDR block – in this example we are using 10.24.10.0/24 as CIDR block, and 64516 as Amazon Side BGP ASN: 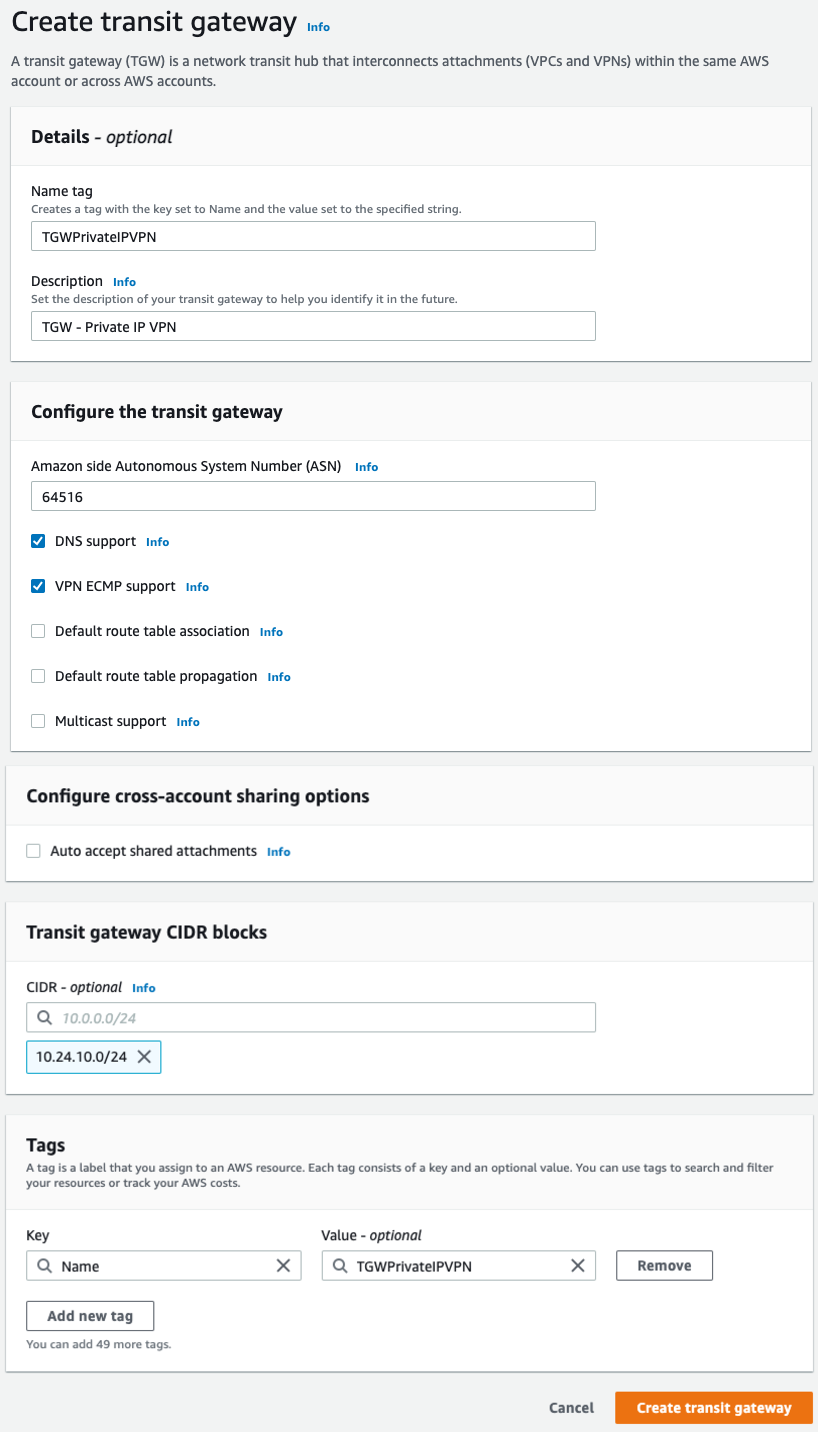 We need now to associate the Transit Gateway with the Direct Connect gateway. As you see in the image and CLI command below, we are adding the Transit Gateway CIDR block in the “Allowed prefixes” section. We are announcing this CIDR block to on premises, so when we are creating the VPN tunnels, the on-premises router can know that it needs to route the request to the private outside IP addresses via the Transit VIF. 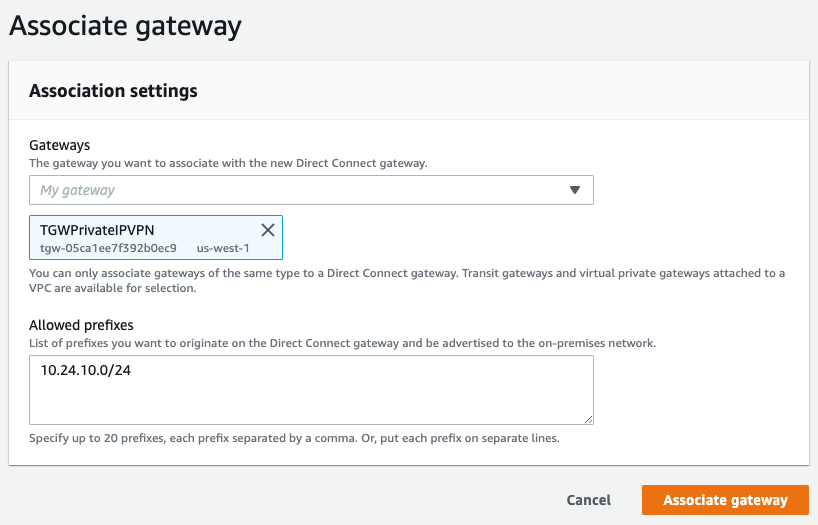 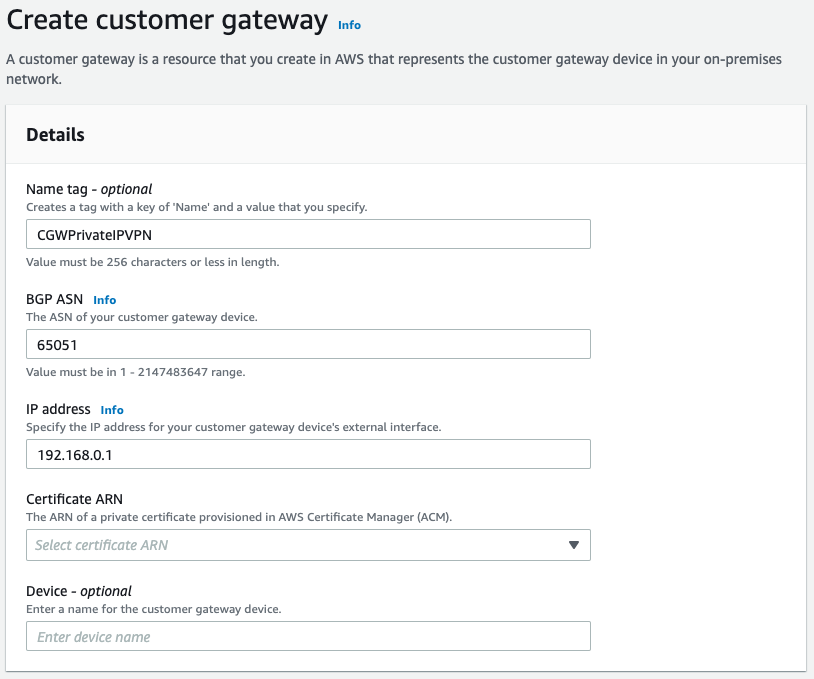 The IP address to configure in the Customer gateway should be from the Transit Gateway CIDR block we defined in Step 2, and the BGP ASN the one from your on-premises environment (and different from this example). 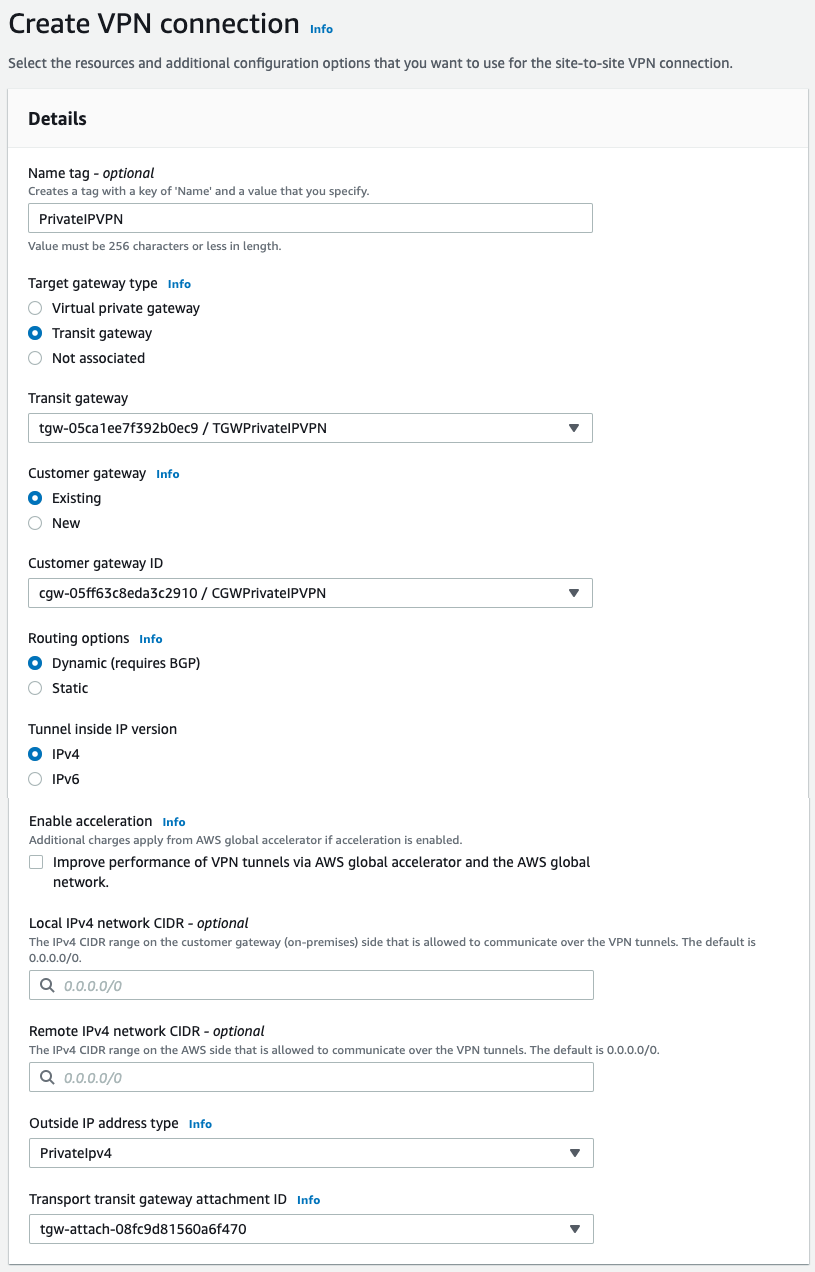 For the CLI command, to get the Direct Connect attachment ID, we will filter for attachments that are in both the associated state and available state:

We can then use the following CLI command to create the VPN connection:

With this, we have our Private IP VPN connection and VPN Transit Gateway attachment created. The tunnel configuration from on premises, and the propagation and association of the VPN attachment will work as with a normal AWS Site-to-Site VPN connection.

To get the details of the new IPSec VPN connection, we will filter using the specific Direct Connect attachment ID:

If you followed the steps above to test the creation of a Private IP VPN, remember that you need to clean the following resources to avoid undesired costs. In this section we are only showing the CLI commands needed for the clean-up. If you followed the walkthrough using the AWS Management Console, follow the same order when deleting the resources.

With this new feature, you can now create AWS Site-to-Site VPN connections on top of a Direct Connect connection using private IPs. Previously, customers had to use Public VIFs to achieve this traffic encryption, and therefore were forced to use public IP addresses for VPN endpoints. The usage of public IPs increases the probability of external attacks compelling customers to deploy additional security equipment for network protection. The Private IP VPN feature provides end-to-end private connectivity in addition to traffic encryption, improving the overall security posture.

Pablo is a Networking Solutions Architect at AWS, where he helps customers to design secure, resilient and cost-effective networks. When not talking about Networking, Pablo can be found playing basketball or video-games. He holds a MSc in Electrical Engineering from the Royal Institute of Technology (KTH), and a Master’s degree in Telecommunications Engineering from the Polytechnic University of Catalonia (UPC).

Andy is a Network Specialist Solutions Architect at AWS with a passion for Network Automation. Prior to joining AWS, Andy worked as a Network Architect in a number of industry segments such as Oil & Gas, Finance, UK Government and public sector specialising in Data Centre networking and network automation. In his spare time Andy has participated and taught various martial arts for the last 25 years.