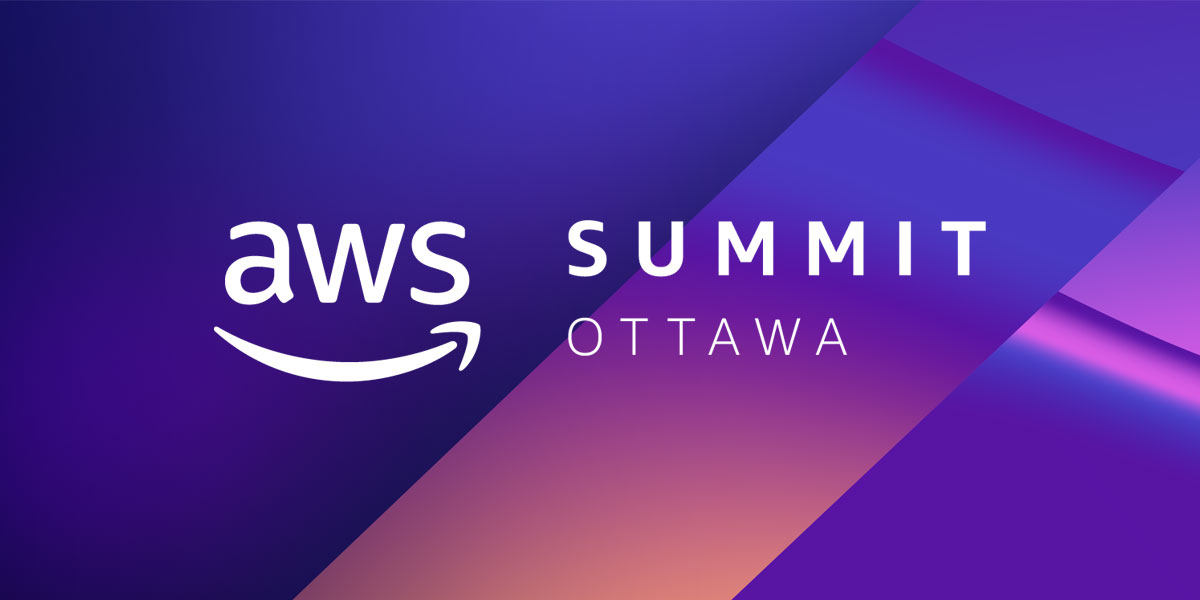 For the first time in three years, public and commercial sector customers gathered at the Shaw Centre for the AWS Summit Ottawa. During the keynote, Sean Roche, director of national security at Amazon Web Services (AWS), shared stories of innovation in the public sector, celebrated pioneers driving change, and provided an outlook on opportunities ahead.

The keynote outlined how to use AWS to turn data into an asset, push the boundaries of what is possible with flexibility and scale, and architect with security in mind while moving fast and keeping costs low. During the keynote, two Canadian public sector customers—Shared Services Canada and the Canada Revenue Agency—took to the stage to share their stories about how they are leveraging AWS to accelerate innovation, improve citizens’ lives, transform their operations, and drive their missions forward at scale.

A $20 billion-plus investment in Canada

To kick off the keynote, I joined Kirsten Robinson, AWS Canada’s federal government leader, to share how AWS is significantly increasing its investment in Canada. Since our launch here in 2016, we’ve invested $1.4B in the country’s economy, with plans to invest up to $21B in infrastructure, services, and job creation by 2037. One such investment is the AWS Canada West (Calgary) Region, launching in late 2023/early 2024. This new Region will provide more options for Canadian data residency, and it will reduce latency for customers in western Canada. Additionally, AWS is bringing two new AWS Local Zones to Toronto and Vancouver. Local Zones bring AWS compute, storage, databases, and other services closer to customers.

AWS is also investing in Canadian communities–and the planet more broadly. AWS currently has more than 2,800 employees in Canada, and has helped train more than 100,000 Canadians in cloud skills. We’re also on track to power our operations with 100% renewable energy by 2025—five years ahead of our original 2030 commitment. In 2021, Amazon announced its first renewable energy investments in Canada: two solar farms in Alberta that will generate 80 and 375 megawatts, respectively. They will provide enough energy to power nearly 120,000 Canadian homes for a year.

Public sector organizations are being challenged to do more with less, while digitally transforming the way they operate. It’s an ongoing process, and one that unlocks key opportunities: “That transformation enables what is most important to you: Giving your teams new and seemingly unlimited capacity to serve the people of Canada,” said Sean Roche.

Making everything a programmable resource

“No matter what mission you deliver, there’s nothing on your priority list that wasn’t needed yesterday,” said Sean. The cloud makes everything a programmable resource, where a challenge can be solved without a lengthy approval process or substantial cost investment. For example, AWS collaborated with Axiom Space to send an AWS Snowcone to the International Space Station. From hearing the challenge to deployment took only seven months. The solution will help speed up data delivery and analysis. Another example showed how AWS helped Ukraine preserve government and citizen data during the war by moving it to the cloud using an AWS Snowcone. To date, AWS has moved 10 petabytes of data.

Maximizing the potential of your biggest asset: your data

The cloud opens up the opportunity to turn data into an asset. It opens up the opportunity to address data bottlenecks by modernizing legacy data architecture. On top of that, customers can build a modern data strategy using AWS data, analytics, and machine learning services. Governments around the world, including in Canada, have realized these benefits and are making data a strategic focus.

One example of data in action is CANImmunize, an app that helps Canadians schedule and keep records of their vaccinations, anytime and anywhere. It reduces time to vaccination by 50% using Amazon Relational Database Service (Amazon RDS) to optimize performance. Another example is the City of Fort St. John, in western Canada. The city worked with smart cities technology company Cocoflo and AWS Partner OpsGuru to create an application that made their municipal services more accessible. Now the city’s residents use a single sign-on to pay bills, get city information, and more. The data is housed on AWS, and is located and backed up in Canada.

Enabling cloud for the government of Canada

As the hub for digital service delivery to the Government of Canada, Shared Services Canada (SSC) is at the forefront of federal digital change. SSC was created in 2011 to transform how the government manages and secures its IT infrastructure. And now, “the cloud is the new chapter in SSC’s enterprise evolution,” said Sony Perron, president of SSC.

During the Summit keynote, President Perron shared how SSC can help Canadian government organizations accelerate their digital transformation and make the path to cloud simpler and faster, by providing an enterprise approach to cloud services. In addition to brokering services, SSC also provides technical expertise and tools to guide customers and simplify cloud adoption. “Cloud computing is leading to greater reliability of government IT applications, increased agility in the development and implementation of new solutions, and improved government services to Canadians,” he concluded.

The Canada Revenue Agency (CRA) is the government of Canada’s revenue service. It collects taxes and administers benefit programs, like the Canada Emergency Response Benefit (CERB). CERB was launched to provide financial support to Canadians who were directly affected by COVID-19. When CERB was launched at the height of tax season, the CRA knew their on-premises call centre solution couldn’t handle the volume of calls. “Everyone was eager to help Canadians get the help they desperately needed,” said Janique Godin, CRA director-general for debt management, regulatory affairs, and the appeals directorate. The CRA turned to AWS to create a hybrid solution that could scale to meet the huge volume of calls to their call centres. The call centre solution was set up in about two days, which allowed CRA to onboard 5,000 volunteer CRA staff to answer calls and deliver services. This allowed the CRA to answer seven million calls in the first month.

Moving forward, “The cloud will be the foundation of the CRA’s service strategy in the future…Our seamless service experience vision is to provide a number of integrated service channels or entry points to the CRA based on the needs or preference of Canadians,” said Michael Honcoop, director-general of the CRA’s contact centre services directorate. “We firmly believe that this will result in citizens feeling more empowered and supported, which will in turn help Canadians comply with their tax obligations and access the benefits that are entitled to.” Reflecting on the effort overall, he concluded, “I have never been more proud to be a public servant,”

Accelerating research and time to science and insights

If there’s one key takeaway from the AWS Summit Ottawa keynote, it’s that organizations are using the cloud to drive innovation on an unprecedented scale. And this is just the beginning. Join us at next year’s event on April 20, 2023, and discover the next wave of cloud-powered change.

Learn more about AWS Summit Ottawa and explore how AWS is empowering the public sector in Canada.

Read more about AWS for the Canadian public sector: