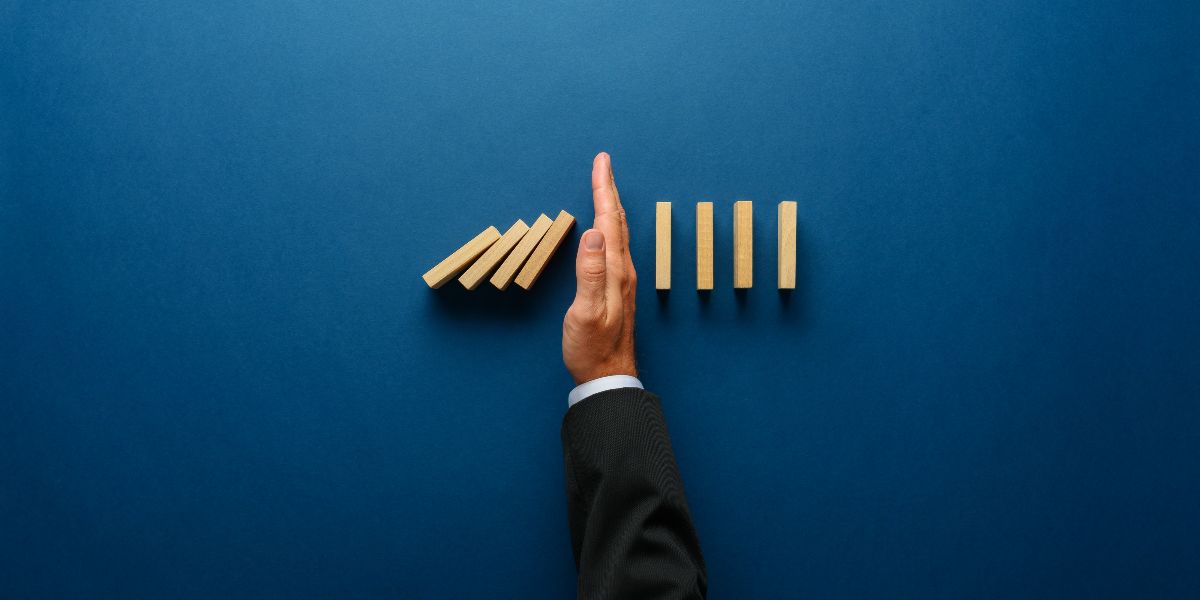 Around the world, citizens rely on their governments for a myriad of essential public services—especially during emergencies. However, interruptions to IT systems can be dire emergencies too, since they can have a far-reaching impact on organizations and the people who rely on them. As extreme weather events become more common, public sector organizations need to design their IT solutions to be resilient and have a plan for unexpected events. Disaster recovery (DR)—the process of providing fast, reliable recovery of IT systems to minimize downtime and data loss—is a crucial investment for public sector organizations, along with business continuity planning (BCP) and disaster preparedness.

Many public sector organizations have been making meaningful progress on modernizing their approaches to IT, including adopting the cloud. However, out-of-date DR and BCP policies prevent organizations from improving in these critical areas. Lifting and shifting old DR strategies into the cloud can diminish the potential benefits of using the cloud to improve operational resilience. For example, organizations that have only used on-premises hosting often ask their new cloud provider how far apart cloud data centers are located from each other, for DR purposes. The emphasis on specific distances between data center sites comes from the legacy approach to DR, in which the greater the distance between an organization’s data centers, the less chance that a single adverse event will impact IT operations in all of the data centers at the same time.

This assumption has been the bedrock of legacy DR approaches for the last few decades. This is why Amazon Web Services (AWS) provides its customers with DR options that include the ability to deploy workloads in a multi-Region, active-active architecture where customers can achieve recovery point objectives (RPOs) of near zero and very low recovery time objectives (RTOs). For example, many AWS customers in Canada use a second AWS Region in the US or other locations for DR purposes. However, there are some organizations that would like to keep their data within the borders of Canada, and these tend to be the organizations that ask for specific distance requirements between data centers for DR purposes. Organizations with such requirements have a range of options to achieve their RPOs and RTOs with AWS using the AWS Region in Canada that is backed by three Availability Zones (i.e. clusters of data centers).

Governments and organizations can’t achieve aggressive RPOs and RTOs simply by building data centers further apart. This line of thinking doesn’t account for a key reality: the greater the distance between data centers, the greater the network latency. At some point, the limitations imposed by the speed of light make data replication with relational databases or running distributed systems very challenging. Unfortunately, no amount of innovation increases the speed of light. This could mean that the very distance requirements that are supposed to help support DR objectives actually introduce latency that make RTOs and RPOs more challenging or even impossible to meet. Latency, down time, and data loss are literally built into the legacy approach.

The following graphic (Figure 1) provides estimates of how much latency would be observed as data centers move further apart. Our experience shows us that for high availability applications, there is a Goldilocks zone for infrastructure planning: a distance that’s not too close, and not too far, but just right. The Goldilocks zone is the distance between Availability Zones or data centers that can support aggressive RPOs and RTOs while keeping latency low enough for high availability applications.

When you look at the risk that natural disasters pose, clearly the further away the better—but after only tens of miles, there are diminishing returns. Beyond tens of miles, the types of disasters mitigated would likely be extinction-level events, like the meteor that killed the dinosaurs. This isn’t an exact range and what qualifies as too close varies on geographic region; things like seismic activity, hundred-year flood plains, and the probability of large hurricanes and typhoons, all influence how we think about too close. But we want miles of separation.

And what about too far? Here we look at the latency between all the Availability Zones in a Region and target a maximum latency round trip of about one millisecond. Whether you are setting up replication with a relational database or running a distributed system like Amazon Simple Storage Service (Amazon S3) or Amazon DynamoDB, we’ve found that maintaining the network conditions to support high availability applications gets fairly challenging when latency goes beyond one millisecond. 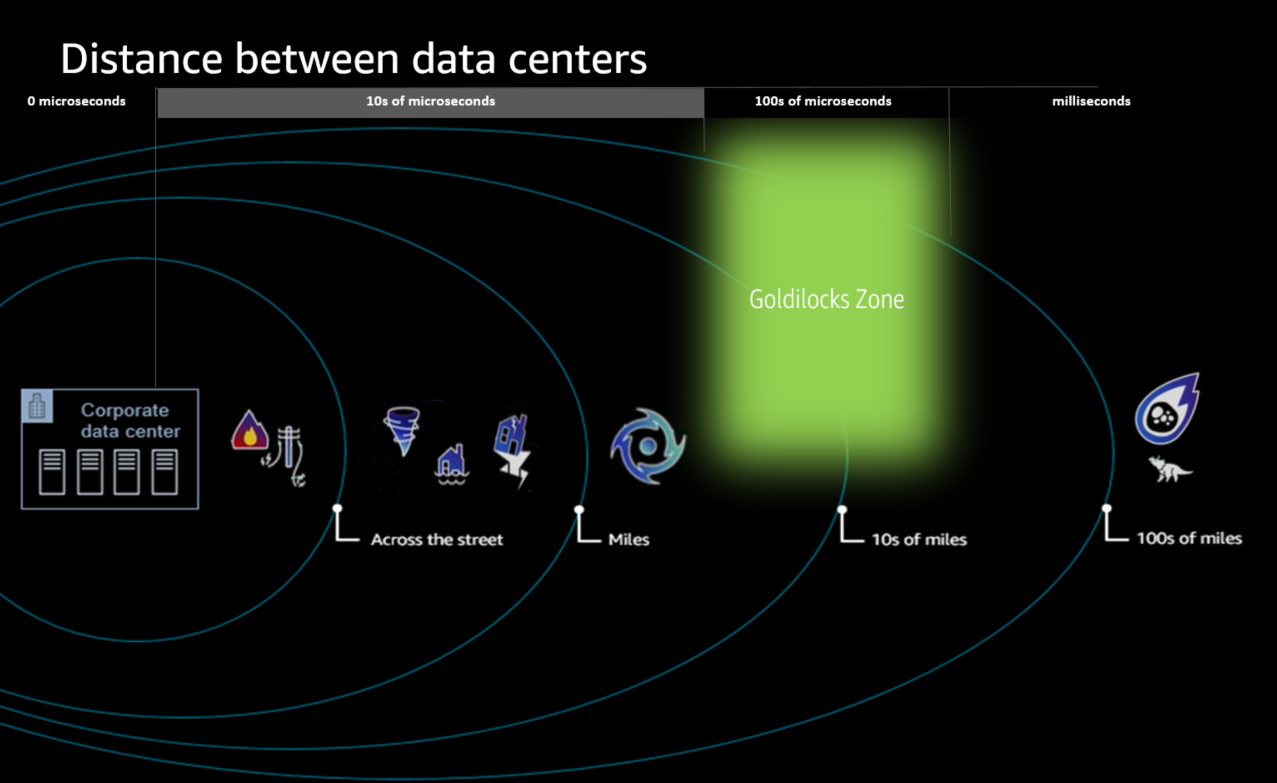 In Canada, for example, AWS looked at decades of data related to floods and other environmental factors before we settled on a location for the AWS Canada (Central) Region. Launched in 2016 in Montréal, Québec, this Region has three Availability Zones. Consistent with the Goldilocks zone concept, the region’s third Availability Zone (AZ3) is more than 45 kms (28 miles) away from the next-closest Availability Zone. Based on our years of experience building and operating AWS Regions around the world, this is enough distance to significantly reduce the risk of a single event impacting availability.

Canada’s Great Ice Storm of 1998 was one such unexpected weather event that became the catalyst for AWS customer Hydro-Québec to transform its infrastructure. “The ice storm gave us an opportunity to upgrade and establish a more robust and reliable power grid that could endure natural disasters and be repaired faster. It also allowed us to implement an improved company-wide approach to ensure and measure resiliency,” explains Christian Déjean, Chief of Economic Development & Strategy at Hydro-Québec. Now, AWS’s three Canadian Availability Zones are almost entirely powered by Hydro-Québec’s clean, renewable hydropower.

The improvements to the power grid in this geographic area, coupled with the redundancies designed in AWS data centers, provide AWS customers with a resilient infrastructure for their workloads in the AWS Canada (Central) Region. Water, power, telecommunications, and internet connectivity are designed with redundancy to maintain continuous operations in an emergency. Electrical power systems are designed to be fully redundant so that in the event of a disruption, uninterruptible power supply units can be engaged for certain functions, whereas generators can provide backup power for the entire facility. People and systems monitor and control the temperature and humidity to prevent overheating, further reducing possible service outages.

On November 8, 2021, AWS announced plans to open a second infrastructure Region in Alberta, Canada, in late 2023/early 2024. The AWS Canada West (Calgary) Region will consist of three Availability Zones at launch. With this new Region, AWS will be the only hyperscale cloud provider with a Region in Western Canada, driving greater fault tolerance, resiliency, and availability. Additionally, AWS has recently announced the availability of new services that can help customers plan and test resilience and DR, including AWS Resilience Hub, AWS Fault Injection Simulator, and AWS Elastic Disaster Recovery. And like the Canada (Central) Region, the new Canada West (Calgary) Region will follow the “Goldilocks zone” principle of making sure that its Availability Zones are not too close, but also not too far, from each other.

Designing for disaster recovery is an important investment that every organization needs to implement early on. Using the Goldilocks zone approach can help you optimize your DR without falling into the trap of requiring arbitrary distances between hosting sites. To get started, review our best practice resources below. Got questions? Contact our team.