How to add DNS filtering to your NAT instance with Squid

September 23, 2020: The squid configuration file in this blog post and associated YAML template have been updated.

September 4, 2019: We’ve updated this blog post, initially published on January 26, 2016. Major changes include: support of Amazon Linux 2, no longer having to compile Squid 3.5, and a high availability version of the solution across two availability zones.

Amazon Virtual Private Cloud (Amazon VPC) enables you to launch AWS resources on a virtual private network that you’ve defined. On an Amazon VPC, many people use network address translation (NAT) instances and NAT gateways to enable instances in a private subnet to initiate outbound traffic to the Internet, while preventing the instances from receiving inbound traffic initiated by someone on the Internet.

For security and compliance purposes, you might have to filter the requests initiated by these instances (also known as “egress filtering”). Using iptables rules, you could restrict outbound traffic with your NAT instance based on a predefined destination port or IP address. However, you might need to enforce more complex security policies, such as allowing requests to AWS endpoints only, or blocking fraudulent websites, which you can’t easily achieve by using iptables rules.

In this post, I discuss and give an example of how to use Squid, a leading open-source proxy, to implement a “transparent proxy” that can restrict both HTTP and HTTPS outbound traffic to a given set of Internet domains, while being fully transparent for instances in the private subnet.

In this section, I present the architecture of the high availability NAT solution and explain how to configure Squid to filter traffic transparently. Later in this post, I’ll provide instructions about how to implement and test the solution. 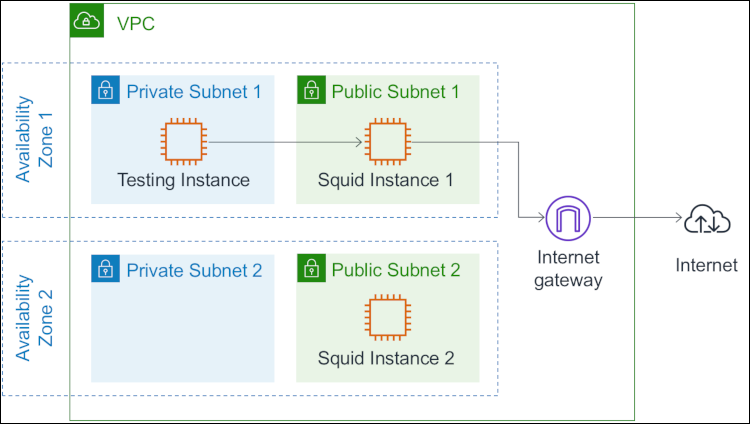 In each availability zone, the route table associated to the private subnet sends the outbound traffic to the Squid instance (see Route Tables for a NAT Device). Squid intercepts the requested domain, then applies the following filtering policy:

Note 1: Some older client-side software stacks do not support SNI. Here are the minimum versions of some important stacks and programming languages that support SNI: Python 2.7.9 and 3.2, Java 7 JSSE, wget 1.14, OpenSSL 0.9.8j, cURL 7.18.1

Note 2: TLS 1.3 introduced an optional extension that allows the client to encrypt the SNI, which may prevent Squid from intercepting the requested domain.

The SslPeekAndSplice feature was introduced in Squid 3.5 and is implemented in the same Squid module as SslBump. To enable this module, Squid requires that you provide a certificate, though it will not be used to decode HTTPS traffic. The solution creates a certificate using OpenSSL.

The following code shows the Squid configuration file. For HTTPS traffic, note the ssl_bump directives instructing Squid to “peek” (retrieve the SNI) and then “splice” (become a TCP tunnel without decoding) or “terminate” the connection depending on the requested host.

The text file located at /etc/squid/whitelist.txt contains the list of whitelisted domains, with one domain per line. In this blog post, I’ll show you how to configure Squid to allow requests to *.amazonaws.com, which corresponds to AWS endpoints. Note that you can restrict access to a specific set of AWS services that you’ve defined (see Regions and Endpoints for a detailed list of endpoints), or you can set your own list of domains.

You may have noticed that Squid listens on port 3129 for HTTP traffic and 3130 for HTTPS. Because Squid cannot directly listen to 80 and 443, you have to redirect the incoming requests from instances in the private subnets to the Squid ports using iptables. You do not have to enable IP forwarding or add any FORWARD rule, as you would do with a standard NAT instance. 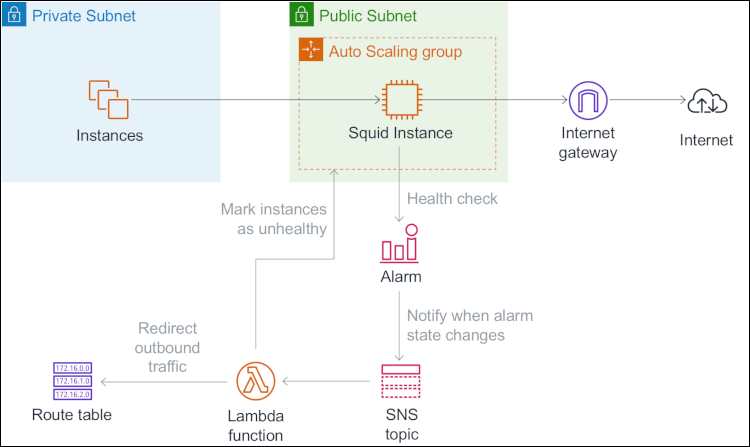 Figure 2: The architecture to address if a Squid instance fails within an Availability Zone

Each Squid instance is launched in an Amazon EC2 Auto Scaling group that has a minimum size and a maximum size of one instance. A shell script is run at startup to configure the instances. That includes installing and configuring Squid (see Running Commands on Your Linux Instance at Launch).

The solution uses the CloudWatch Agent and its procstat plugin to collect the CPU usage of the Squid process every 10 seconds. For each Squid instance, the solution creates a CloudWatch alarm that watches this custom metric and goes to an ALARM state when a data point is missing. This can happen, for example, when Squid crashes or the Squid instance fails. Note that for my use case, I consider watching the Squid process a sufficient approach to determining the health status of a Squid instance, although it cannot detect eventual cases of the Squid process being alive but unable to forward traffic. As a workaround, you can use an end-to-end monitoring approach, like using witness instances in the private subnets to send test requests at regular intervals and collect the custom metric.

When the CloudWatch agent starts collecting the custom metric again on the replacement Squid instance, the alarm reverts to OK state. Similarly, CloudWatch sends a notification to the SNS topic, which then triggers the Lambda function. The Lambda function completes the lifecycle action (see Amazon EC2 Auto Scaling Lifecycle Hooks) to indicate that the replacement instance is ready to serve traffic, and updates the route table associated to the private subnet in the same availability zone to route traffic to the replacement instance.

Implementing and testing the solution

Now that you understand the architecture behind this solution, you can follow the instructions in this section to implement and test the solution in your AWS account.

First, you’ll use AWS CloudFormation to provision the required resources. Select the Launch Stack button below to open the CloudFormation console and create a stack from the template. Then, follow the on-screen instructions.

CloudFormation will create the following resources:

After the stack creation has completed (it can take up to 10 minutes), connect onto the Testing Instance using Session Manager, a capability of AWS Systems Manager that lets you manage instances through an interactive shell without the need to open an SSH port:

Note: Session Manager makes calls to several AWS endpoints (see Working with SSM Agent). If you prefer to restrict access to a defined set of AWS services, make sure to whitelist the associated domains.

After the connection is made, you can test the solution with the following commands. Only the last three requests should return a valid response, because Squid allows traffic to *.amazonaws.com only.

To find the requests you just made in the access logs, here’s how to browse the Squid logs in Amazon CloudWatch Logs:

You can now delete the CloudFormation stack to clean up the resources that were just created.

The solution that I describe in this blog is fully transparent for instances in the private subnets, which means that instances don’t need to be aware of the proxy and can make requests as if they were behind a standard NAT instance. An alternate solution is to deploy a forward proxy in your Amazon VPC and configure instances in private subnets to use it (see the blog post How to set up an outbound VPC proxy with domain whitelisting and content filtering for an example). In this section, I discuss some of the differences between the two solutions.

A major drawback with forward proxies is that the proxy must be explicitly configured on every instance within the private subnets. For example, you can configure the HTTP_PROXY and HTTPS_PROXY environment variables on Linux instances, but some applications or services, like yum, require their own proxy configuration, or don’t support proxy usage. Note also that some AWS services and features, like Amazon EMR or Amazon SageMaker notebook instances, don’t support using a forward proxy at the time of this post. However, with TLS 1.3, a forward proxy is the only option to restrict outbound traffic if the SNI is encrypted.

Deploying a forward proxy on AWS usually consists of a load balancer distributing traffic to a set of proxy instances launched in an Auto Scaling group. Proxy instances can be launched or terminated dynamically depending on the demand (also known as “horizontal scaling”). With forward proxies, each route table can route traffic to a single instance at a time, and changing the type of the instance is the only way to increase or decrease the capacity (also known as “vertical scaling”).

The solution I present in this post does not dynamically adapt the instance type of the Squid instances based on the demand. However, you might consider a mechanism in which the traffic from a private subnet is temporarily redirected through another Availability Zone while the Squid instance is being relaunched by Auto Scaling with a smaller or larger instance type.

Deploying a centralized proxy solution and using it across multiple VPCs is a way of reducing cost and operational complexity.

With a forward proxy, instances in private subnets send IP packets to the proxy load balancer. Therefore, sharing a forward proxy across multiple VPCs only requires connectivity between the “instance VPCs” and a proxy VPC that has VPC Peering or equivalent capabilities.

In this section, I give an example of how to share a transparent proxy across multiple VPCs using AWS Transit Gateway. The architecture is illustrated in the following diagram. For the sake of simplicity, the diagram does not include Availability Zones.

Here’s how instances in the private subnet of “VPC App” can make requests via the shared transparent proxy in “VPC Shared:”

You could also use AWS Transit Gateway to implement a transparent proxy solution that scales horizontally. This allows you to add or remove proxy instances based on the demand, instead of changing the instance type. With this approach, you must deploy a fleet of proxy instances – launched by an Auto Scaling group, for example – and mount a VPN connection between each instance and the transit gateway. The proxy instances need to support ECMP (“Equal Cost Multipath routing”; see Transit Gateways) to equally spread the outbound traffic between instances. I don’t describe this alternative architecture further in this blog post.

In this post, I’ve shown how you can use Squid to implement a high availability solution that filters outgoing traffic to the Internet and helps meet your security and compliance needs, while being fully transparent for the back-end instances in your VPC. I’ve also discussed the key differences between transparent proxies and forward proxies. Finally, I gave an example of how to share a transparent proxy solution across multiple VPCs using AWS Transit Gateway.

If you have any questions or suggestions, please leave a comment below or on the Amazon VPC forum.

If you have feedback about this blog post, submit comments in the Comments section below.