Using a content delivery network (CDN) such as Amazon CloudFront to cache and serve static text and images or downloadable objects such as media files and documents is a common strategy to improve webpage load times, reduce network bandwidth costs, lessen the load on web servers, and mitigate distributed denial of service (DDoS) attacks. AWS WAF is a web application firewall that can be deployed on CloudFront to help protect your application against DDoS attacks by giving you control over which traffic to allow or block by defining security rules. When users access your application, the Domain Name System (DNS) translates human-readable domain names (for example, www.example.com) to machine-readable IP addresses (for example, 192.0.2.44). A DNS service, such as Amazon Route 53, can effectively connect users’ requests to a CloudFront distribution that proxies requests for dynamic content to the infrastructure hosting your application’s endpoints.

In this blog post, I show you how to deploy CloudFront with AWS WAF and Route 53 to help protect dynamic web applications (with dynamic content such as a response to user input) against DDoS attacks. The steps shown in this post are key to implementing the overall approach described in AWS Best Practices for DDoS Resiliency and enable the built-in, managed DDoS protection service, AWS Shield.

AWS hosts CloudFront and Route 53 services on a distributed network of proxy servers in data centers throughout the world called edge locations. Using the global Amazon network of edge locations for application delivery and DNS service plays an important part in building a comprehensive defense against DDoS attacks for your dynamic web applications. These web applications can benefit from the increased security and availability provided by CloudFront and Route 53 as well as improving end users’ experience by reducing latency.

The following screenshot of an Amazon.com webpage shows how static and dynamic content can compose a dynamic web application that is delivered via HTTPS protocol for the encryption of user page requests as well as the pages that are returned by a web server.

The following map shows the global Amazon network of edge locations available to serve static content and proxy requests for dynamic content back to the origin as of the writing of this blog post. For the latest list of edge locations, see AWS Global Infrastructure.

How AWS Shield, CloudFront, and Route 53 work to help protect against DDoS attacks

To help keep your dynamic web applications available when they are under DDoS attack, the steps in this post enable AWS Shield Standard by configuring your applications behind CloudFront and Route 53. AWS Shield Standard protects your resources from common, frequently occurring network and transport layer DDoS attacks. Attack traffic can be geographically isolated and absorbed using the capacity in edge locations close to the source. Additionally, you can configure geographical restrictions to help block attacks originating from specific countries.

The request-routing technology in CloudFront connects each client to the nearest edge location, as determined by continuously updated latency measurements. HTTP and HTTPS requests sent to CloudFront can be monitored, and access to your application resources can be controlled at edge locations using AWS WAF. Based on conditions that you specify in AWS WAF, such as the IP addresses that requests originate from or the values of query strings, traffic can be allowed, blocked, or allowed and counted for further investigation or remediation. The following diagram shows how static and dynamic web application content can originate from endpoint resources within AWS or your corporate data center. For more details, see How CloudFront Delivers Content and How CloudFront Works with Regional Edge Caches. 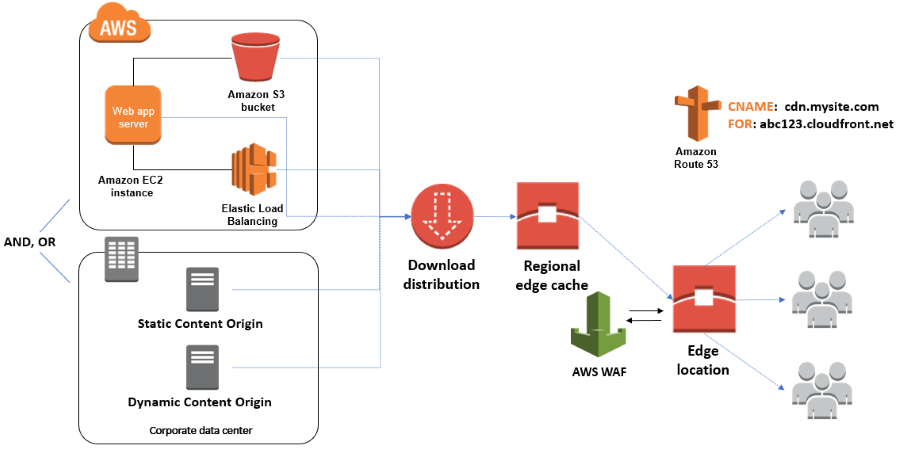 Route 53 DNS requests and subsequent application traffic routed through CloudFront are inspected inline. Always-on monitoring, anomaly detection, and mitigation against common infrastructure DDoS attacks such as SYN/ACK floods, UDP floods, and reflection attacks are built into both Route 53 and CloudFront. For a review of common DDoS attack vectors, see How to Help Prepare for DDoS Attacks by Reducing Your Attack Surface. When the SYN flood attack threshold is exceeded, SYN cookies are activated to avoid dropping connections from legitimate clients. Deterministic packet filtering drops malformed TCP packets and invalid DNS requests, only allowing traffic to pass that is valid for the service. Heuristics-based anomaly detection evaluates attributes such as type, source, and composition of traffic. Traffic is scored across many dimensions, and only the most suspicious traffic is dropped. This method allows you to avoid false positives while protecting application availability.

Route 53 is also designed to withstand DNS query floods, which are real DNS requests that can continue for hours and attempt to exhaust DNS server resources. Route 53 uses shuffle sharding and anycast striping to spread DNS traffic across edge locations and help protect the availability of the service.

The next four sections provide guidance about how to deploy CloudFront, Route 53, AWS WAF, and, optionally, AWS Shield Advanced.

To take advantage of application delivery with DDoS mitigations at the edge, start by creating a CloudFront distribution and configuring origins:

A hosted zone, similar to a DNS zone file, is a collection of records that belongs to a single parent domain name. Each hosted zone has four nonoverlapping name servers in a delegation set. If a DNS query is dropped, the client automatically retries the next name server. If you have not already registered a domain name and have not configured a hosted zone for your domain, complete these two prerequisite steps before proceeding:

After you have registered your domain name and configured your public hosted zone, follow these steps to create an alias resource record set:

The following screenshot of the Route 53 console shows a Route 53 alias resource record set that is configured to map a domain name to a CloudFront distribution.

AWS WAF is a web application firewall that helps detect and mitigate web application layer DDoS attacks by inspecting traffic inline. Application layer DDoS attacks use well-formed but malicious requests to evade mitigation and consume application resources. You can define custom security rules (also called web ACLs) that contain a set of conditions, rules, and actions to block attacking traffic. After you define web ACLs, you can apply them to CloudFront distributions, and web ACLs are evaluated in the priority order you specified when you configured them. Real-time metrics and sampled web requests are provided for each web ACL.

You can configure AWS WAF whitelisting or blacklisting in conjunction with CloudFront geo restriction to prevent users in specific geographic locations from accessing your application. The AWS WAF API supports security automation such as blacklisting IP addresses that exceed request limits, which can be useful for mitigating HTTP flood attacks. Use the AWS WAF Security Automations Implementation Guide to implement rate-based blacklisting.

The following diagram shows how the (a) flow of CloudFront access logs files to an Amazon S3 bucket (b) provides the source data for the Lambda log parser function (c) to identify HTTP flood traffic and update AWS WAF web ACLs. As CloudFront receives requests on behalf of your dynamic web application, it sends access logs to an S3 bucket, triggering the Lambda log parser. The Lambda function parses CloudFront access logs to identify suspicious behavior, such as an unusual number of requests or errors, and it automatically updates your AWS WAF rules to block subsequent requests from the IP addresses in question for a predefined amount of time that you specify. 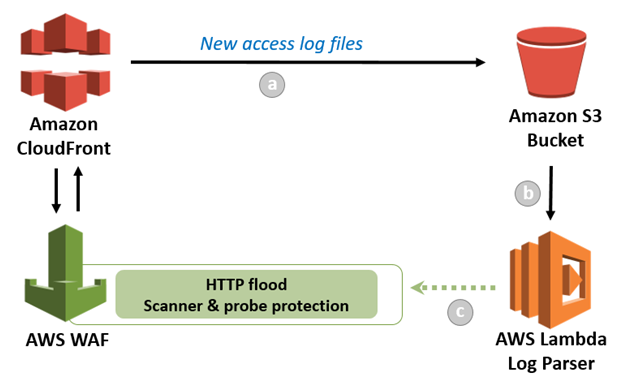 In addition to automated rate-based blacklisting to help protect against HTTP flood attacks, prebuilt AWS CloudFormation templates are available to simplify the configuration of AWS WAF for a proactive application-layer security defense. The following diagram provides an overview of CloudFormation template input into the creation of the CommonAttackProtection stack that includes AWS WAF web ACLs used to block, allow, or count requests that meet the criteria defined in each rule.

To implement these application layer protections, follow the steps in Tutorial: Quickly Setting Up AWS WAF Protection Against Common Attacks. After you have created your AWS WAF web ACLs, you can assign them to your CloudFront distribution by updating the settings.

In this blog post, I outline the steps to deploy CloudFront and configure Route 53 in front of your dynamic web application to leverage the global Amazon network of edge locations for DDoS resiliency. The post also provides guidance about enabling AWS WAF for application layer traffic monitoring and automated rules creation to block malicious traffic. I also cover the optional steps to activate AWS Shield Advanced, which helps build a more comprehensive defense against DDoS attacks for your dynamic web applications.

If you have comments about this post, submit them in the “Comments” section below. If you have questions about or issues implementing this solution, please open a new thread on the AWS WAF forum.