PKWARE has been working on finding and protecting sensitive data in a range of data stores over the last 15 years.

PK Protect Data Store Manager (DSM) is PKWARE’s flagship product for data stores that can scan for sensitive elements in structured and unstructured data, and optionally mask or encrypt the data.

In this post, we describe the steps to scan objects in Amazon S3 buckets and protect them with masking or encryption.

PKWARE is an AWS Data and Analytics Competency Partner that provides enterprise software for personal data discovery and protection.

There are four layers in the deployment architecture, as shown in Figure 1:

For Amazon S3 operations, the overall architecture is simplified in Figure 2. Users interact with the PK Protect DSM server via either the browser-based UI or REST APIs.

The PK Protect DSM server sends commands to the S3 IDP for scanning or protecting objects within S3 buckets. The S3 IDP provisions its own compute for the processing.

The resources allocated for the compute are fully configurable by the user of PK Protect DSM. The S3 IDP can reside in the same Amazon Elastic Compute Cloud (Amazon EC2) instance or in a separate EC2 instance from the Controller. Multiple IDPs can be attached to a single Controller.

The DimCustomer.csv table contains personal information about customers. Figure 3 shows an overview snapshot of the first few columns of the table. 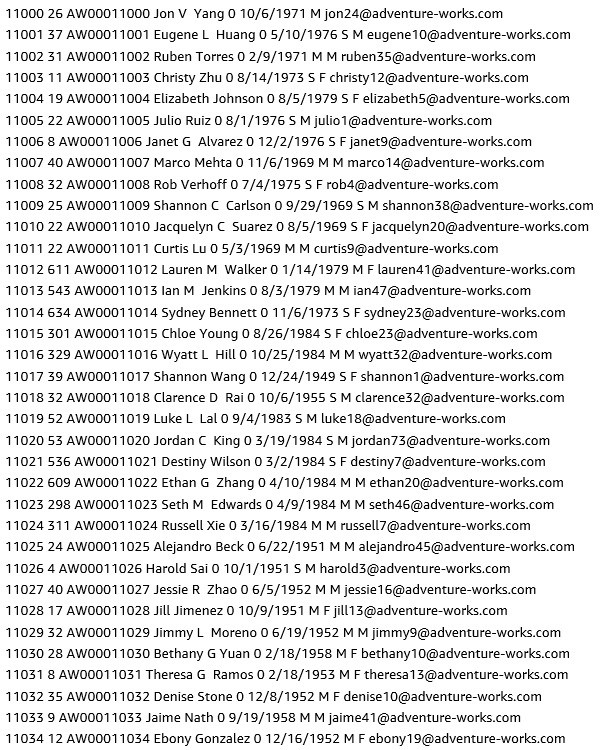 The first few columns from a couple of rows that will be discussed in detail are shown in Figure 4.

Scanning or protecting data via PK Protect DSM requires the creation of a task that operates on the data store. A task requires a policy and details of the target upon which the policy is applied. The following are the relevant key concepts within PK Protect DSM that help set up and execute tasks:

In this section, we’ll get into the details of creating and executing detection and protection tasks on Amazon S3. The three major steps are Policy Creation, Task Definition, and Task Execution.

The first step is to determine which policies are applicable in your organization. If one or more of the predefined policies are sufficient, then no further action is needed.

More typically, especially in large organizations, the need is felt to create custom policies, and in many cases, custom sensitive types. For example, a proprietary customer identifier may be needed, as well as additional context to confirm an item is indeed of a particular type. 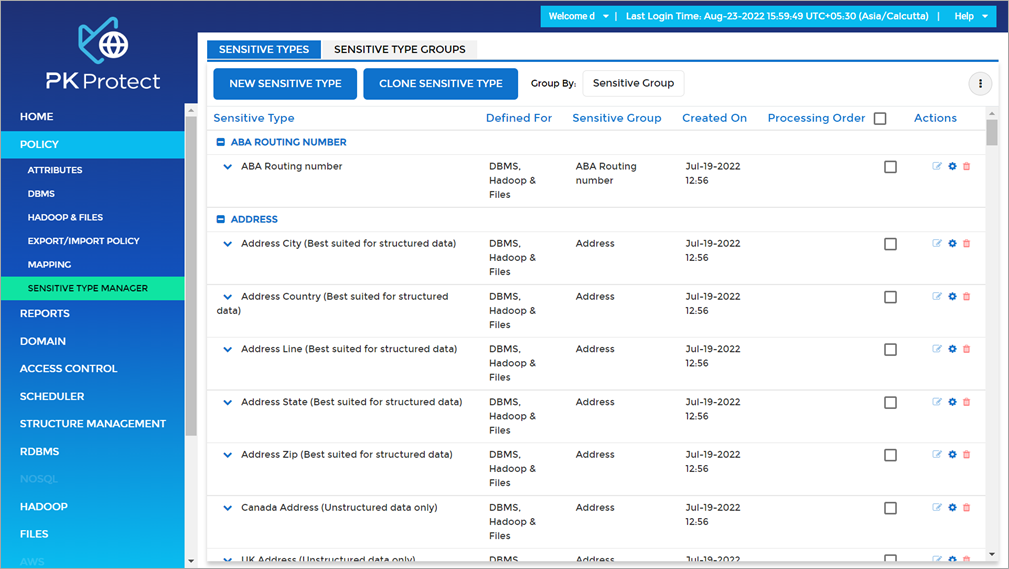 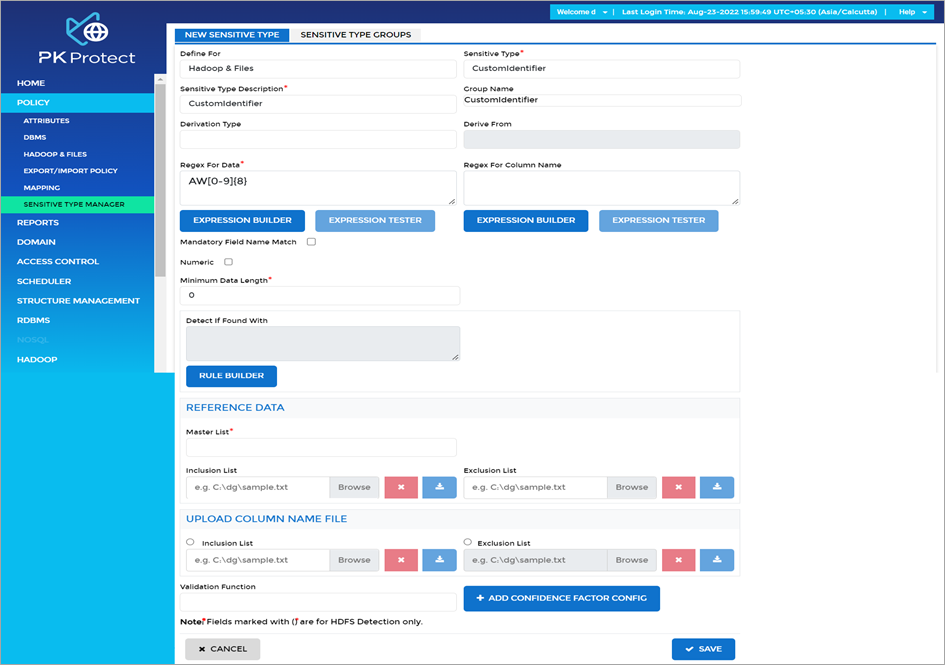 In Figure 7, we show how the contents of Column 3 of the sample data set DimCustomer.csv can be defined as a sensitive type so that detection and protection can be done. This particular custom type, named CustomIdentifier, starts with the letters “AW” followed by eight numerical digits.

In this case, the logic applied to find elements of this custom type is based only on regular expressions. However, PK Protect DSM supports far more complex methods of specifying custom types, including reference lists, custom validation methods, and machine learning. 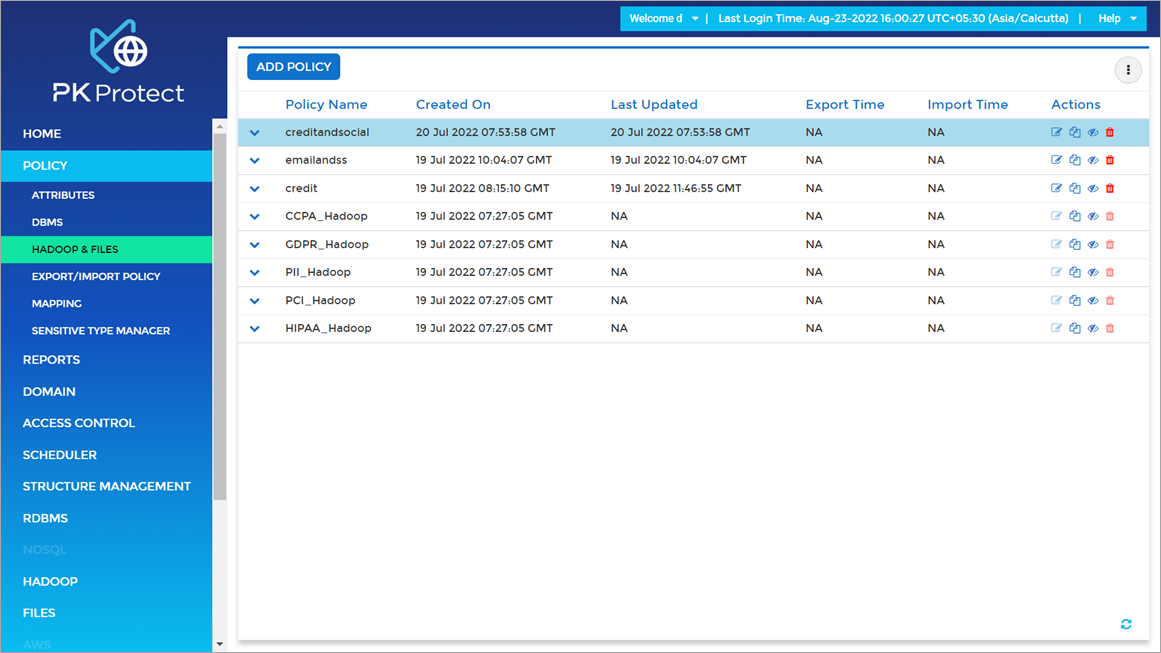 Once all custom sensitive types needed are defined, a new policy can be created by clicking the New Policy tab in the Policy Screen, as shown in Figure 8. All types needed in the policy can be included there with optional protection options selected.

Once the set of policies is decided upon, tasks need to be created to scan specific buckets or paths within a bucket. Figure 9 shows the PK Protect DSM browsers that enable point-and-click selection of scan paths. 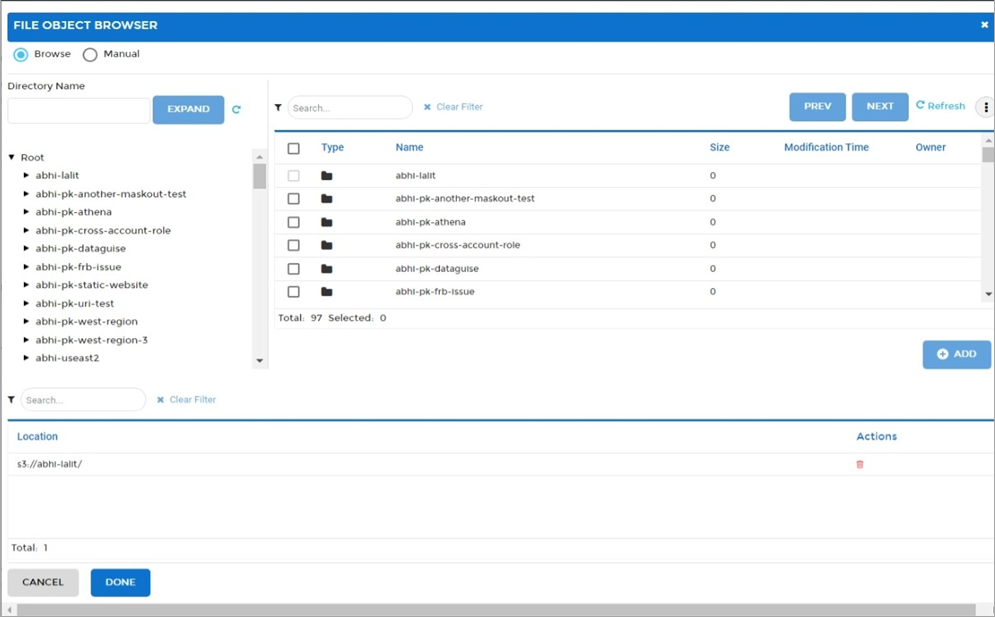 As discussed before, each task type has many options. PK Protect DSM offers anywhere between single-digit to 100 percent sampling of the data for detection. Another option, provided for both detection and protection, is incrementality of the scan.

By default, scans are incremental in that previously scanned objects are not scanned again. This can be overridden using the Full Scan option.

Once the task definition is set, the task can be executed any number of times from the Tasks screen. 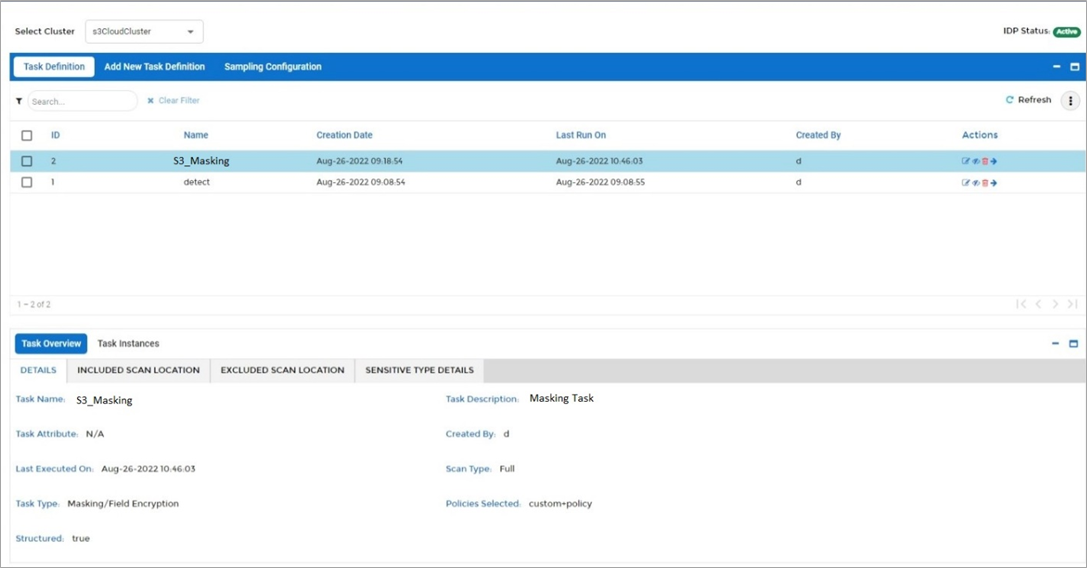 Completed tasks show the results in the UI, and there are three panes in the results screen. The top pane is a listing of task instances that executed. If one of these instances is selected, the other two panes show information for that task. The Task Instance Overview section in the middle pane shows details about the execution of the task instance selected in the top pane. The Results Overview tab in the bottom pane consists of four graphs.

Clicking the Detailed Results tab of the bottom pane gives a breakdown of the sensitive data information on a per-object basis. The results can be exported to PDF or Excel for further analysis or presentation. 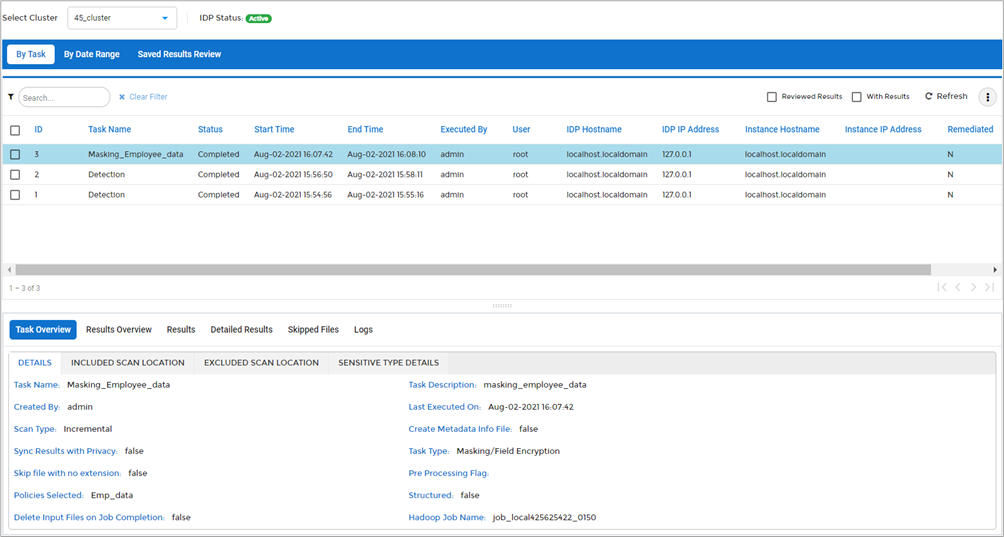 In addition to the summarized results in Figure 11, where aggregate numbers are shown for each sensitive type as part of the pie chart, the Detailed Results tab shows counts of sensitive types found in each Amazon S3 object. 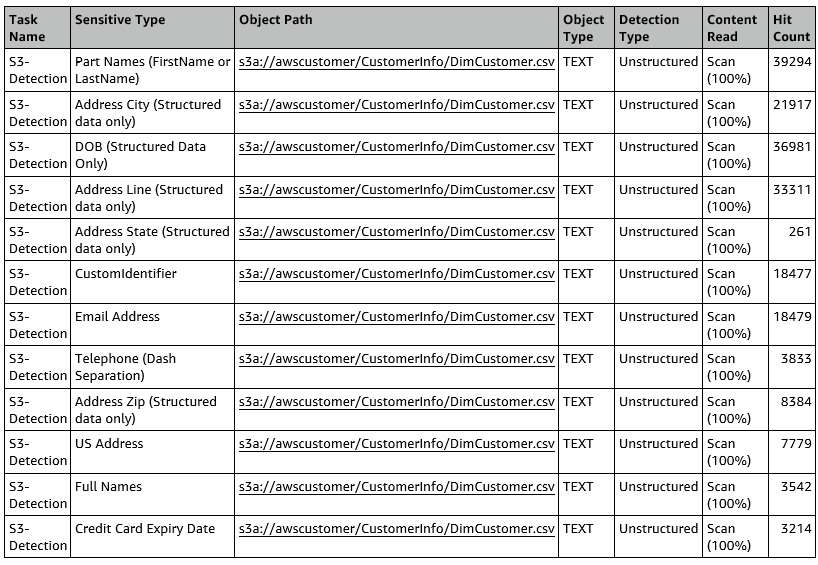 A masking or encryption task can be set up similar to the above for detection. The appropriate task type is to be selected, as shown in Figure 13.

In the case of structured data, masking or encryption can also be done without first running detection. For this, structure definition and import capabilities are provided.

For masking and encryption, a target bucket and path name within the bucket can be designated. Masked and/or encrypted copies of the original objects will be placed in the target bucket/path name. The source data can optionally be deleted as part of these operations.

If a masking or encryption operation has been performed, results can be seen in the target bucket and path specified earlier as part of task definition.

Note that Columns 3, 4, 5, 7, and 10 are masked. The masking option chosen, Format-Preserving Masking, retains the alphabetical characters as alphabets and numerics as numerics, but substitutes other values for these.

The decryption library returns decrypted values dynamically based on the executor’s rights to decrypt. In both cases, the rights to decrypt can be set for various users at the granularity level of sensitive type groups. PK Protect DSM provides integration to enterprise directory systems to import users and apply decryption rights.

PK Protect DSM also includes command line capability (DGCL) and a REST API to fully automate the above scans and other capabilities provided in the product.

Using the REST API, the command to execute a task is:

tomcatPort – port at which Tomcat is listening

taskID – ID of the task to execute

This post has focused on detecting and protecting sensitive data at the element level in Amazon S3 with PK Protect Data Store Manager (DSM).

PKWARE is an AWS Data and Analytics Competency Partner that provides enterprise software for personal data discovery and protection.