Customers that have decided to embark on a cloud transformation of their applications typically need to create detailed plans on how to secure business continuity during the migration period.

This entails migrating the application workloads to Amazon Web Services (AWS) with minimal or no downtime, as well as ensuring historical datasets and user configurations are also moved and retained.

In this post, we will discuss how MYCOM OSI was able to design workload migrations for its suite of Experience Assurance and Analytics (EAA) applications from on-premises private data center environments into a software-as-a-service (SaaS) model based on AWS.

In today’s fast-paced world, with 24/7 application and database availability, mission-critical stateful applications such as EAA typically can’t afford significant downtime while migrating to the cloud.

Cost and scalability are very compelling, but so is the need for enterprises to increase their agility and speed with which they can change their customer experience.

AWS has been architected to be the most flexible and secure cloud computing environment available. AWS core infrastructure is built to satisfy the security requirements for military, global banks, and other high-sensitivity organizations.

AWS uses the same secure hardware and software to build and operate each of the regions, so customers worldwide can benefit from the only commercial cloud that has had its service offerings and associated supply chain vetted and accepted as secure enough for top-secret workloads. This is backed by a deep set of cloud security tools, with more than 230 security, compliance, and governance services and key features.

Challenges and De-Risking Migration to the Cloud

Now that we understand the motivations and benefits of running application on AWS, we need to enumerate the challenges around how to migrate and mitigate risk around the migration itself.

Migrating an existing set of EAA assurance applications that are already running in a private data center environment can be a particular challenge for several reasons:

To address these challenges and satisfy the requirements, the design decision was taken to parallel-build the target set of applications on AWS. The parallel-build approach is also known as a “blue-green” upgrade and opens up a range of de-risking options to systematize and automate elements of the upgrade and migration.

AWS provides various tools in the cloud migration space, which are tested and proven tools that support data migration use cases and take away a significant number of challenges. This includes AWS Database Migration Service (AWS DMS) and AWS DataSync—both services map to specific areas of the EAA application data pools that are migrated.

AWS DMS facilitates the migration of databases to AWS. It can migrate relational databases, data warehouses, NoSQL databases, and other types of data stores into the AWS Cloud. AWS DMS equally supports homogeneous and heterogenous migrations between different database platforms.

MYCOM OSI’s migration design also leverages AWS DataSync, which is used to copy and synchronize EAA historical data pools and application configuration data to AWS. It is a secure, online service that automates and accelerates moving data between on premises and AWS storage services.

MYCOM OSI decided on a reproducible and incremental migration methodology that in aggregate amounts to a blue-green migration sequence for stateful application migrations.

The sequence adopted was defined as follows:

The parallel build-out covers preparatory areas such as on-premises connectivity and networking to AWS. The combination of AWS Direct Connect and AWS PrivateLink are a common preference in the context of mission-critical and latency sensitive applications.

AWS Direct Connect is the shortest path to AWS Cloud resources. While in transit, the network traffic remains on the AWS global network and never touches the public internet. This reduces the chance of hitting bottlenecks or unexpected increases in latency.

Interface VPC endpoints, powered by AWS PrivateLink, can also connect to services hosted by AWS Partners and supported solutions available in AWS Marketplace. This is an important concept for SaaS, as PrivateLink securely enables the SaaS-provider and SaaS-consumer model and clear service endpoints.

The application migration progresses into the next stage once the connectivity between the data center and AWS Cloud-footprint is established.

In MYCOM OSI’s case, there are two main elements to migrating data history:

The most intensive task is the initial full-load and replication of the RDBMS data; once completed, only the ongoing changes need to be replicated via CDC to the target, such as the Amazon RDS for Oracle instance.

After the database migration is complete, the target database remains synchronized with the source for as long as you choose, allowing users to switchover the database at a convenient time.

All AWS DMS features such as data validation and transformations are available for any replication task.

Setting up the migration of the numerical datastore is based on the AWS DataSync agent, which runs on a virtual machine in the source data center. The agent commences with the full replication of the historical data store to the target file system in the cloud, and then moves into replicating changes as and when they happen.

Both replication streams are running in parallel and run continuously in CDC mode until the time of the cutover. 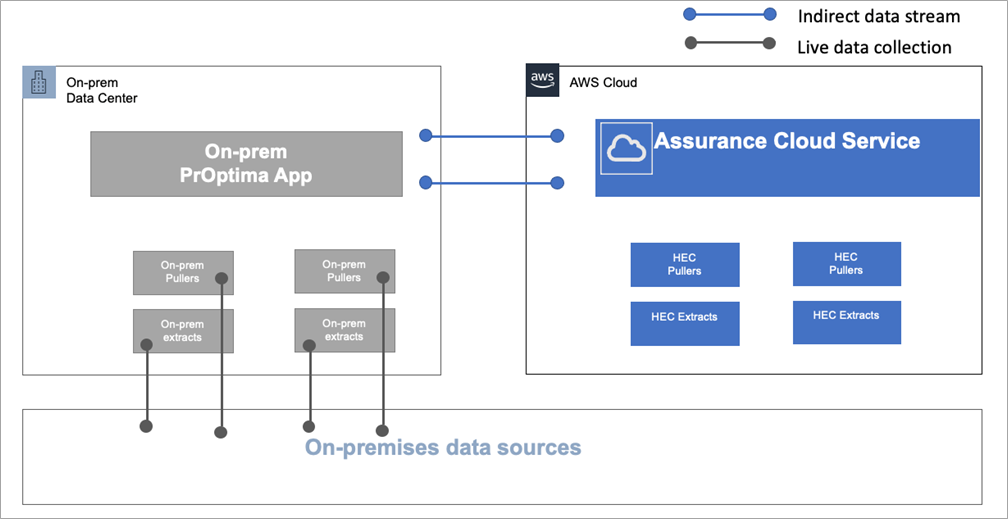 The tradeoff is between protecting source systems from double-collection and the ability to run a full parallel data-load. Both options are possible, hence there is a clear customer choice available.

Equally, a choice can be made by data collection protocol. Typically, data collection protocols would fall into a push/pull model and a publication/subscription model. Protocols that rely on the pull model are most likely the ones that do not easily sustain multiple collection streams and are best migrated via “indirect data relays.” Whilst the relays introduce additional latency to the end-to-end data flow, the avoidance of double-collection can be a priority.

At this stage, the historical dataset and near real-time dataset and ingestion are available in the “green” target application instance running in the AWS Cloud.

The validation phase begins once both the blue and green systems and data collectors are running in parallel. The datasets on both application instances can now be readily compared.

The validation is based on KPIs such as data collection latency, data importation latency, data completeness, and data integrity. Other benchmarks such as computation time for specific user-generated activities and application fluidity can be measured and reported on.

For MYCOM OSI, there were several decisions that had been made to arrive at a reproducible and de-risked approach for customer workload migrations to AWS. These are the key ingredients for successful Experience Assurance and Analytics (EAA) application migrations to AWS:

Customers that deploy and operate EAA applications in on-premises data centers have a proven path to migrating to AWS and SaaS. Each customer deployment will typically have some degree of particularities, but having a proven migration methodology can shorten the path to a de-risked workload migration project.

MYCOM OSI is an AWS Partner that offers assurance, automation, and analytics SaaS applications for the digital era.