There has been a lot of buzz about a new data architecture design pattern called a Lake House.

With a data lake or data warehouse, customers often had to compromise on several factors like performance, quality, or scale. A Lake House approach integrates a data lake with the data warehouse and all of the purpose-built stores so customers no longer have to take a one-size-fits-all approach and are able to select the storage that best suits their needs.

With customers storing data in multiple locations, there’s a need for a unified semantic layer on top of the data, so business intelligence (BI) analysts and data scientists have a single pane of glass through which they can access all of their data.

In this post, we’ll show how to take advantage of powerful and mature Amazon Web Services (AWS) technologies like Amazon Redshift, coupled with a semantic layer from AtScale, to deliver fast, agile, and analysis-ready data to business analysts and data scientists.

AWS offerings in these areas include:

Combining the components above with a business-friendly semantic layer delivers value by making data consumable by anyone.

In the world of data lakes and cloud data warehouses, combined with the rapid growth of self-service data analytics, there are some core requirements that a modern analytics platform must satisfy:

Along with core AWS services, AtScale delivers a platform that robustly satisfies all of these key requirements. AtScale enables a design experience directly on S3 data, while its autonomous data engineering feature leverages Amazon Redshift to deliver an interactive query experience.

In the rest of this post, we’ll provide an end-to-end demonstration of how S3, Amazon Redshift, Amazon Redshift Spectrum, and AtScale provide a complete solution for cloud-based data lake house intelligence.

For the purpose of this scenario, imagine there’s a need to allow business analysts and data scientists to easily interact with and analyze the performance of content delivered using Amazon CloudFront, a content delivery network (CDN). 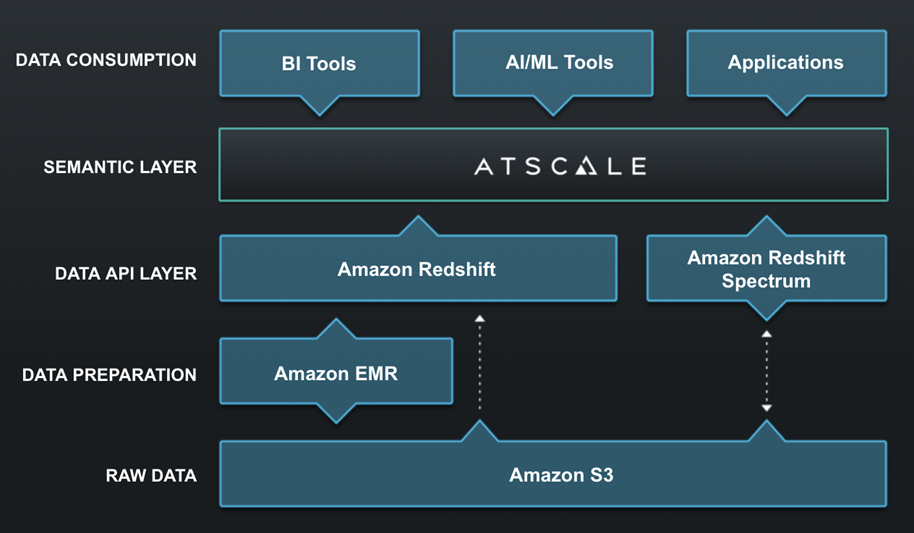 Now, let’s dive into the specific steps to realize this use case.

The logs for Amazon CloudFront are stored on S3, and the first step to making them consumable is to use a batch processing system like Amazon EMR to prepare the data.

Given the volume of raw CDN data and the batch nature of data parsing required, this EMR processing step may be run on a daily or hourly basis, writing back row-level records back to S3.

The Hive DDL to create the table looks like:

Using the code above, a table called cloudfront_logs is created on S3, with a catalog structure registered in the shared AWS Glue Data Catalog.

Because of the shared nature of S3 storage and AWS Glue Data Catalog, this new table can be registered on Amazon Redshift using a feature called Spectrum.

The process of registering an external table using Amazon Redshift Spectrum is simple.

Then, create an external table reference that points to the CloudFront data that was output from the EMR Hive process:

To view the external Amazon Redshift Spectrum table definition and confirm its creation, you may query the SVV_EXTERNAL_COLUMNS system view within your Amazon Redshift database.

Step 3: Create an AtScale Semantic Model on the CloudFront Dataset

Once the CloudFront dataset in S3 has been registered within Amazon Redshift, it’s possible to start creating a semantic layer with AtScale using this data set as the core building block.

The screenshot below shows what the design experience in AtScale looks like when designing a semantic layer on top of data in Amazon Redshift and Amazon S3. 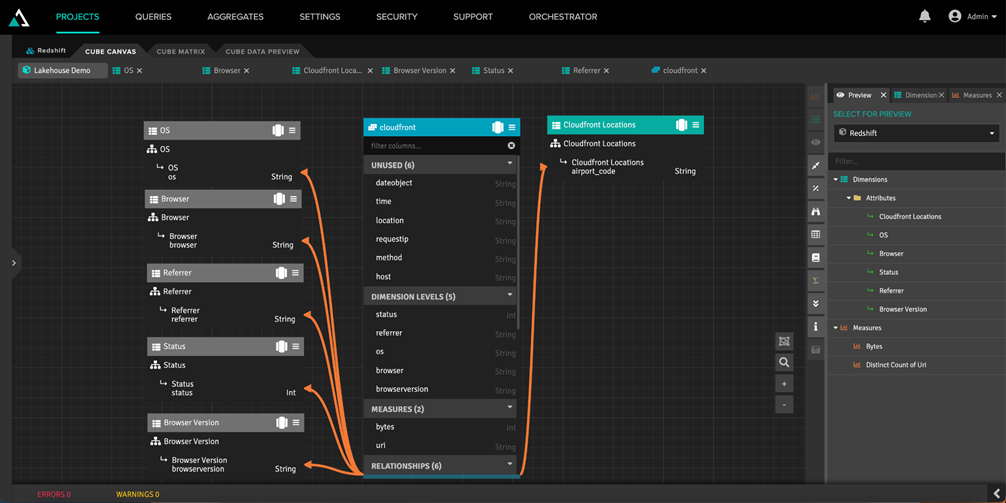 The screenshot above highlights several core capabilities that AtScale and AWS are able to support when used as an end-to-end data lake intelligence solution:

This level of flexibility means that AtScale, Amazon Redshift, and Amazon S3 can be used together to support a broad range of raw data structures sourced from a data lake and/or a cloud data warehouse.

Once created, the AtScale semantic layer can be exposed to virtually any data analytics tool that generates SQL, MDX, DAX, REST, or Python queries.

Let’s take a look at what the CloudFront model looks like when queried using Tableau. 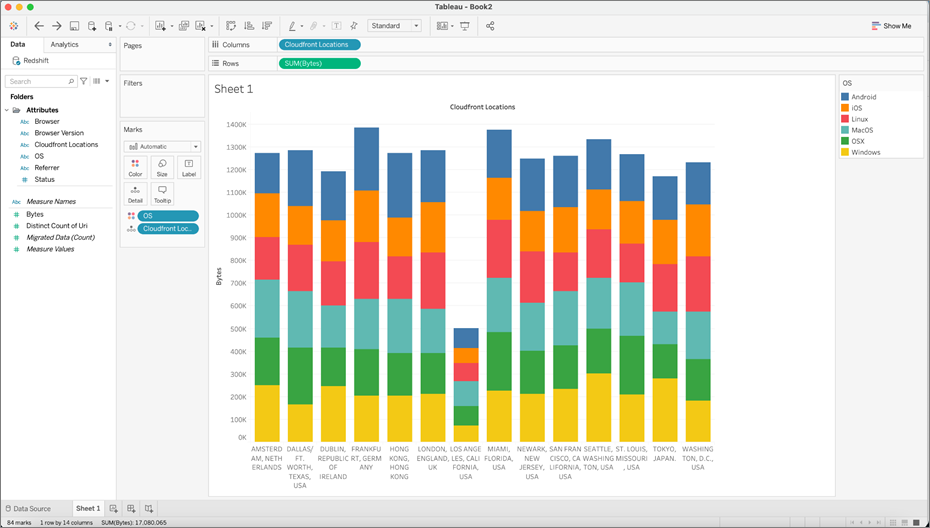 In this view, we are showing the total number of bytes distributed across CloudFront locations, and with the OS of the requestor highlighted by different colors. Note there are 255,475 bytes associated with Linux for CloudFront Locations in Miami, FL.

Looking at the query logs for this query in AtScale helps to better understand the mechanics of the system. First, the inbound query (the query from Tableau to AtScale) shows a very simple SELECT with a GROUP BY:

Upon receiving this query, AtScale uses its knowledge of the AtScale semantic model, along with the availability of data on the Amazon Redshift cluster, to construct an appropriate query to push down to Amazon Redshift, as show in the outbound query below:

Note the query above is able to access both the CloudFront data in S3 (by querying the previously created spectrum.cloudfront table) and join it with data stored as a native Amazon Redshift table: the cloudfront_location table.

Let’s take a look at a query using this same AtScale semantic model from Excel. 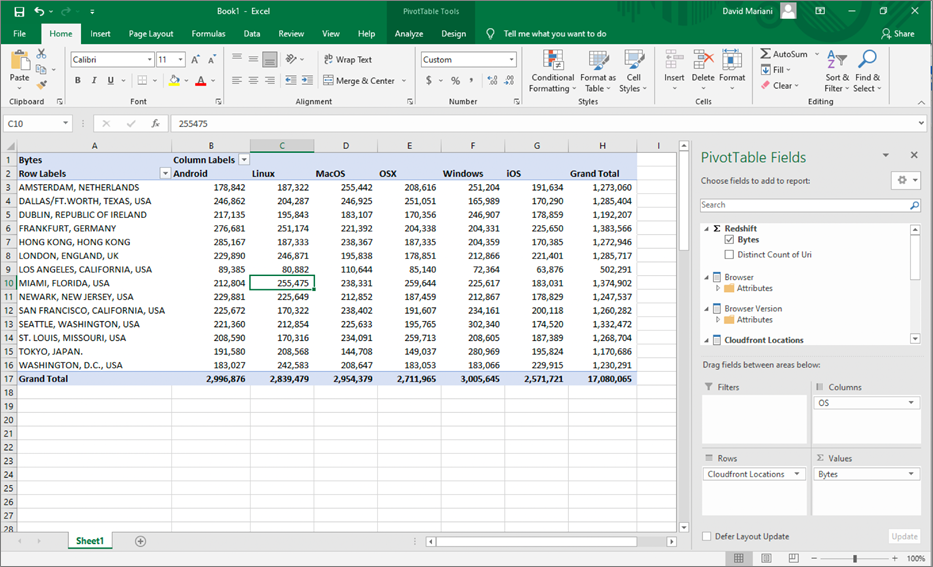 Figure 4 – Excel report showing the number of bytes by location and OS.

Note that even though the BI client in this case is different, the results are identical to the Tableau results: 255,475 bytes for Linux and Miami, FL. Also, note the inbound query for this result set was created in MDX instead of SQL. 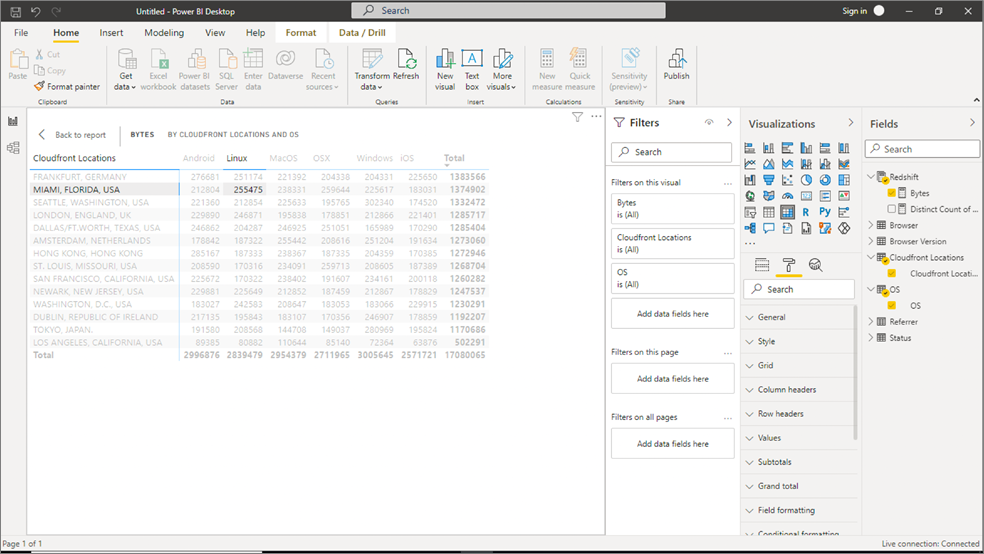 Again, the answers are the same regardless of the client tool. Moreover, in Power BI, if you select the “Model” view, you can see the same model we created in AtScale Design Center. 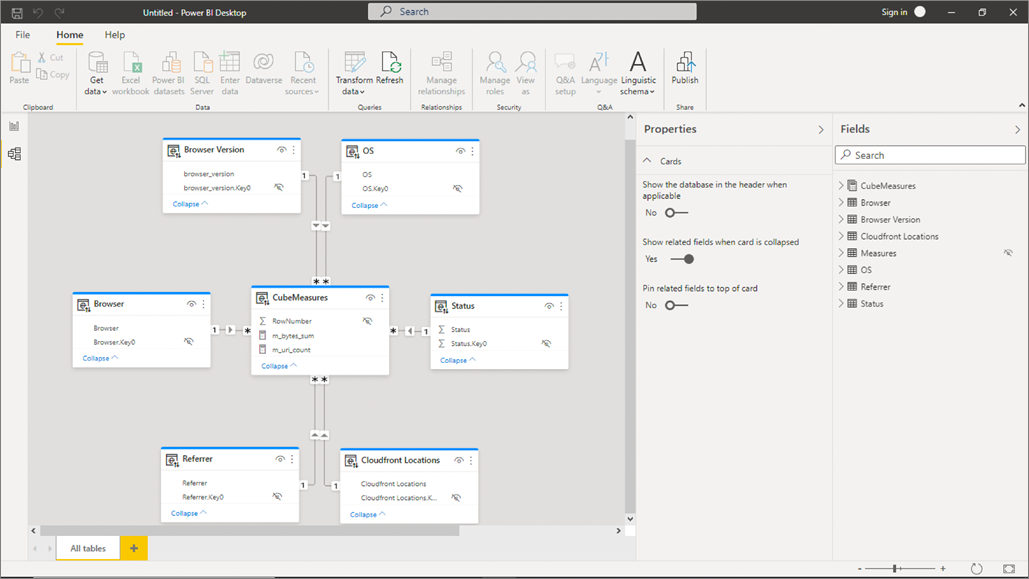 Figure 6 – View of the data model in Power BI.

The AtScale semantic layer also works for data scientists (as you can see below) with Amazon SageMaker using a Jupyter Notebook connected through Python. 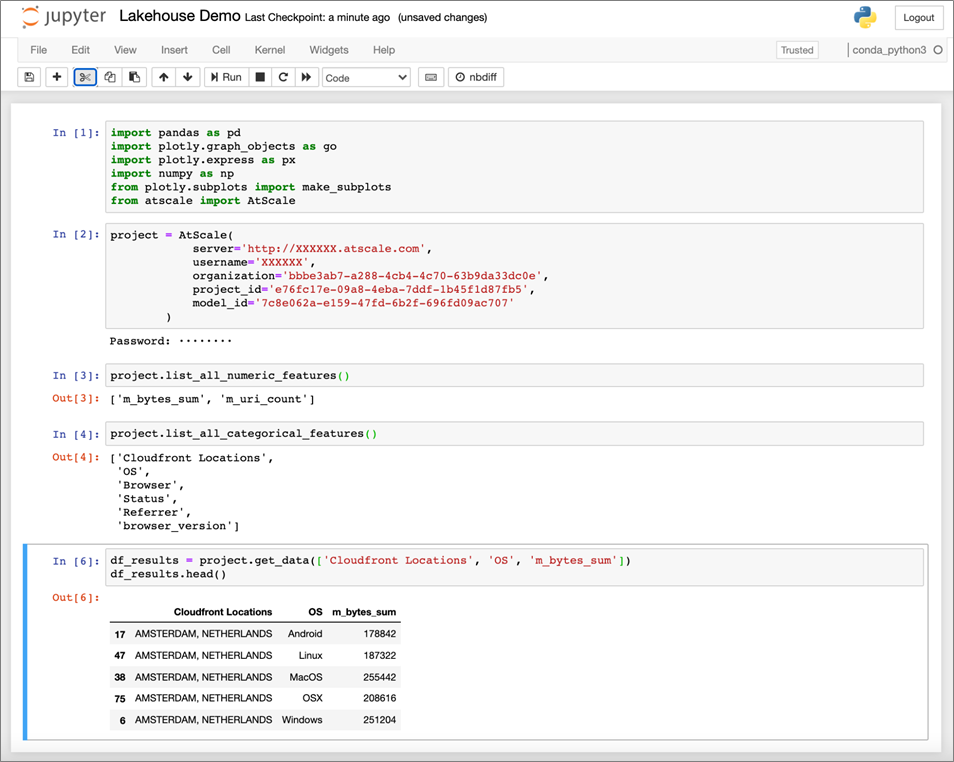 As this scenario highlights, AtScale’s semantic layer—with its support for SQL, MDX, DAX, REST, and Python clients—is able to act as a single and consistent interface for business intelligence and data science.

This capability alone is of great value to enterprises trying to bridge the gap between their big data platforms and analytics consumers.

In order to enable interactive query performance on the largest datasets, AtScale constantly monitors end user query patterns and determines if the creation of an aggregate table would more efficiently satisfy similar versions of the same query.

This aggregate was created in response to the original Tableau query that requested the sum of Bytes grouped by OS and Location. This means that for the MDX query from AtScale, the query can be satisfied by an AtScale managed aggregate table in Amazon Redshift and not the raw data in Spectrum.

The outbound query to satisfy the Excel-derived MDX query is shown below:

Although this query hit the aggregate table (and as a result was faster than a query against the raw data), the results and user experience were consistent for the end user.

In this post, we have shown how AtScale complements Lake House architecture by adding a meaningful semantic layer, creating a data model and defining the measures and dimensions in the data, shielding the analyst from where data is stored within the lake house, and delivering consistent and results regardless of the BI tool used to query the data.

We have also seen how AtScale can increase the performance of queries by automatically creating aggregate tables based on observing query patterns.

With AtScale and AWS, Lake House intelligence is possible without compromises. The Lake House architecture provides the ability to store, access, and analyze vast amounts of data. By combining these technologies with the AtScale semantic layer, organizations can deploy a modern architecture that drives business agility.

AtScale and AWS can help service the needs of business users and data scientists alike while providing speed, security, governance, and flexibility.

AtScale is an AWS Partner that delivers a universal semantic platform for business intelligence and machine learning on Amazon Redshift and Amazon S3.