When you are developing ETL applications using AWS Glue, you might come across some of the following CI/CD challenges:

In this post, I walk you through a solution that implements a CI/CD pipeline for serverless AWS Glue ETL applications supported by AWS Developer Tools (including AWS CodePipeline, AWS CodeCommit, and AWS CodeBuild) and AWS CloudFormation.

This solution uses AWS CodePipeline, which lets you orchestrate and automate the test and deploy stages for ETL application source code. The solution consists of a pipeline that contains the following stages:

1.) Source Control: In this stage, the AWS Glue ETL job source code and the AWS CloudFormation template file for deploying the ETL jobs are both committed to version control. I chose to use AWS CodeCommit for version control.

To get the ETL job source code and AWS CloudFormation template, download the gluedemoetl.zip file. This solution is developed based on a previous post, Build a Data Lake Foundation with AWS Glue and Amazon S3.

2.) LiveTest: In this stage, all resources—including AWS Glue crawlers, jobs, S3 buckets, roles, and other resources that are required for the solution—are provisioned, deployed, live tested, and cleaned up.

3.) DeployToProduction: In this stage, all the resources are deployed using the AWS CloudFormation template to the production environment.

This code pipeline takes approximately 20 minutes to complete the LiveTest test stage (up to the LiveTest approval stage, in which manual approval is required).

To get started with this solution, choose Launch Stack:

This creates the CI/CD pipeline with all of its stages, as described earlier. It performs an initial commit of the sample AWS Glue ETL job source code to trigger the first release change.

In the AWS CloudFormation console, choose Create. After the template finishes creating resources, you see the pipeline name on the stack Outputs tab.

After that, open the CodePipeline console and select the newly created pipeline. Initially, your pipeline’s CodeCommit stage shows that the source action failed.

Allow a few minutes for your new pipeline to detect the initial commit applied by the CloudFormation stack creation. As soon as the commit is detected, your pipeline starts. You will see the successful stage completion status as soon as the CodeCommit source stage runs. 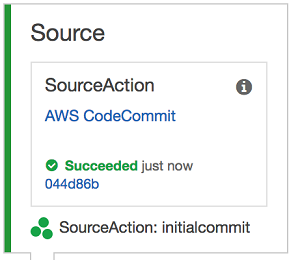 In the CodeCommit console, choose Code in the navigation pane to view the solution files. 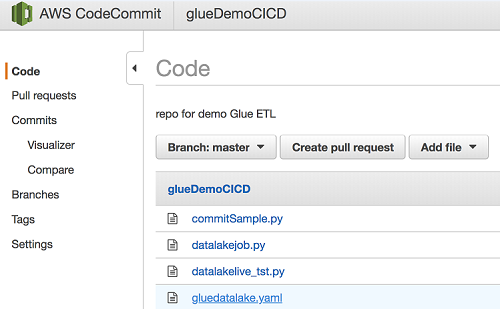 Next, you can watch how the pipeline goes through the LiveTest stage of the deploy and AutomatedLiveTest actions, until it finally reaches the LiveTestApproval action.

At this point, if you check the AWS CloudFormation console, you can see that a new template has been deployed as part of the LiveTest deploy action.

At this point, make sure that the AWS Glue crawlers and the AWS Glue job ran successfully. Also check whether the corresponding databases and external tables have been created in the AWS Glue Data Catalog. Then verify that the data is validated using Amazon Athena, as shown following.

Open the Amazon Athena console, and run the following queries. Verify that the record counts are matching.

The following shows the raw data:

The following shows the transformed data:

The pipeline pauses the action until the release is approved. After validating the data, manually approve the revision on the LiveTestApproval action on the CodePipeline console. 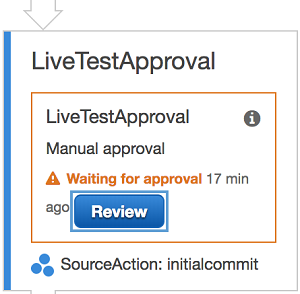 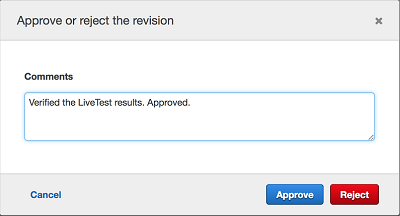 The LiveTestApproval stage now appears as Approved on the console. 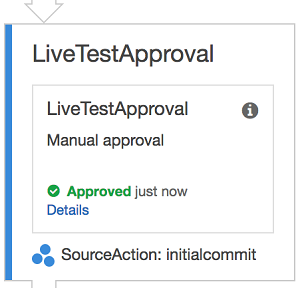 After the revision is approved, the pipeline proceeds to use the AWS CloudFormation template to destroy the resources that were deployed in the LiveTest deploy action. This helps reduce cost and ensures a clean test environment on every deployment. 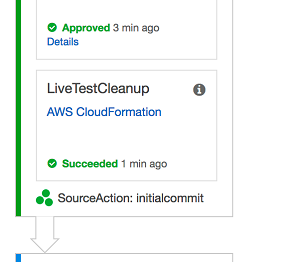 Production deployment is the final stage. In this stage, all the resources—AWS Glue crawlers, AWS Glue jobs, Amazon S3 buckets, roles, and so on—are provisioned and deployed to the production environment using the AWS CloudFormation template. 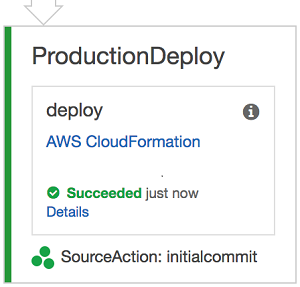 After successfully running the whole pipeline, feel free to experiment with it by changing the source code stored on AWS CodeCommit. For example, if you modify the AWS Glue ETL job to generate an error, it should make the AutomatedLiveTest action fail. Or if you change the AWS CloudFormation template to make its creation fail, it should affect the LiveTest deploy action. The objective of the pipeline is to guarantee that all changes that are deployed to production are guaranteed to work as expected.

In this post, you learned how easy it is to implement CI/CD for serverless AWS Glue ETL solutions with AWS developer tools like AWS CodePipeline and AWS CodeBuild at scale. Implementing such solutions can help you accelerate ETL development and testing at your organization.

If you found this post useful, be sure to check out Implement Continuous Integration and Delivery of Apache Spark Applications using AWS and Build a Data Lake Foundation with AWS Glue and Amazon S3.

Prasad Alle is a Senior Big Data Consultant with AWS Professional Services. He spends his time leading and building scalable, reliable Big data, Machine learning, Artificial Intelligence and IoT solutions for AWS Enterprise and Strategic customers. His interests extend to various technologies such as Advanced Edge Computing, Machine learning at Edge. In his spare time, he enjoys spending time with his family.

Luis Caro is a Big Data Consultant for AWS Professional Services. He works with our customers to provide guidance and technical assistance on big data projects, helping them improving the value of their solutions when using AWS.