This post discusses how the game scales to support concurrent users (CCU) under a load test. While this post focuses on Simple Trivia Service, you can apply the concepts to any serverless workload.

Simple Trivia Service is launching at a new trivia conference. There are 200,000 registered attendees who are invited to play the game during the conference. The developers are following AWS Well-Architected best practice and load test before the launch.

Load testing is the practice of simulating user load to validate the system’s ability to scale. The focus of the load test is the game’s microservices, built using AWS Serverless services, including:

Defining success criteria is one of the first steps in preparing for a load test. You use success criteria to determine how well the game meets the requirements and includes concurrent users, error rates, and response time. These three criteria help to ensure that your users have a good experience when playing your game.

Excluding one can lead to invalid assumptions about the scale of users that the game can support. If you exclude error rate goals, for example, users may encounter more errors, impacting their experience.

The success criteria used for Simple Trivia Service are:

Common metrics to monitor include:

Documentation and other services are also helpful during load testing. Centralized logging via Amazon CloudWatch Logs and AWS CloudTrail provide your team with operational data for the game. This data can help triage issues during testing.

You can place automation around load testing tool to reduce manual effort of running tests. Automation can include allocating environments, deploying and running test scripts, and collecting results. You can include this as part of your continuous integration/continuous delivery (CI/CD) pipeline. You can use the Distributed Load Testing on AWS solution to support Taurus-compatible load testing.

Also, document a plan, working backwards from your goals to help measure your progress. Plans typically use incremental growth of CCU, which can help you to identify constraints in your game. Use your plan while you are in development once portions of your game feature complete. 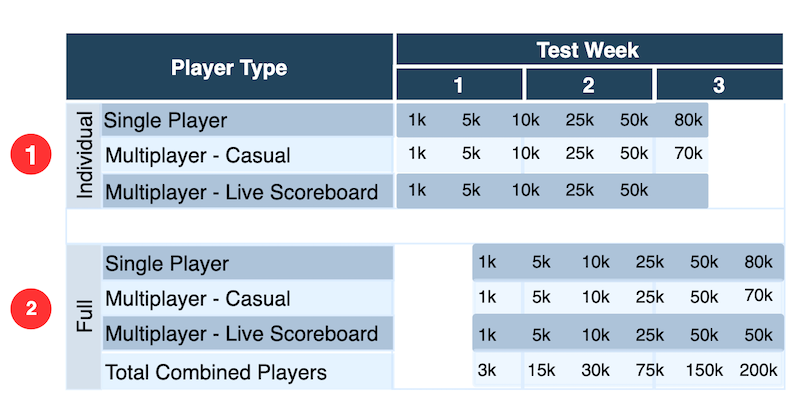 Finally, evaluate your load test and architecture against your AWS Customer Agreement, AWS Acceptable Use Policy, Amazon EC2 Testing Policy, and the AWS Customer Support Policy for Penetration Testing. These policies are put in place to help you to be successful in your load testing efforts. AWS Support requires you to notify them at least two weeks prior to your load test using the Simulated Events Submission Form with the AWS Management Console. This form can also be used if you have questions before your load test.

Additional help for your load test may be available on the AWS Forums, AWS re:Post, or via your account team.

After triggering a test, automation scales up your infrastructure and initializes the test users. Depending on the number of users you need and their startup behavior, this ramp-up phase can take several minutes. Similarly, when the test run is complete, your test users should ramp down. Unless you have modeled the ramp-up and ramp-down phases to match real-world behavior, exclude these phases from your measurements. If you include them, you may optimize for unrealistic user behavior.

While tests are running, let metrics normalize before drawing conclusions. Services may report data at different rates. Investigate when you find metrics that cross your acceptable thresholds. You may need to make adjustments like adding Lambda Provisioned Concurrency or changing application code to resolve constraints. You may even need to re-evaluate your requirements based on how the system performs. When you make changes, re-test to verify any changes had the impact you expected before continuing with your plan.

Finally, keep an organized record of the inputs and outputs of tests, including dashboard exports and your own observations. This record is valuable when sharing test outcomes and comparing test runs. Mark your progress against the plan to stay on track.

Moving into the full test phase of the plan with combined game types identified additional areas for performance optimization. In one case, dashboards highlight unexpected error rates for a Lambda function. Consulting function logs and DevOps Guru to triage the behavior, these show a downstream issue with an Amazon Kinesis Data Stream: 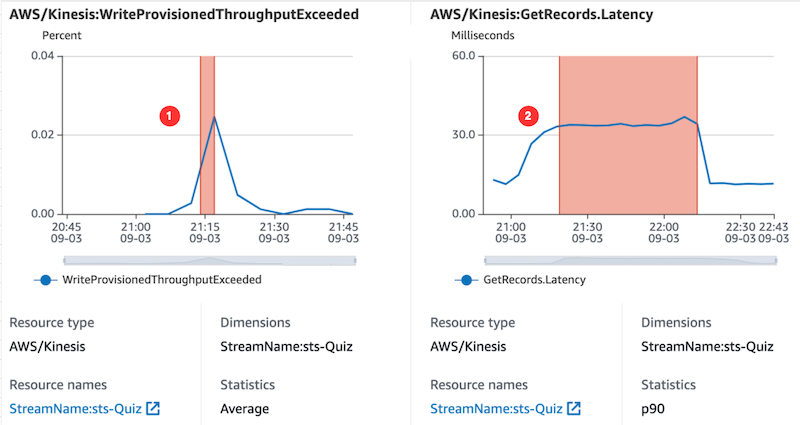 DevOps Guru also links to a recommendation for Kinesis Data Streams to troubleshoot and resolve the incident with the data stream. Following this advice helps to resolve the Lambda error rates during the next test.

By following the plan, making incremental changes as optimizations became apparent, you can reach the goals.

The preceding table is a summary of data from Amazon CloudWatch Lambda Insights and statistics captured from Locust: 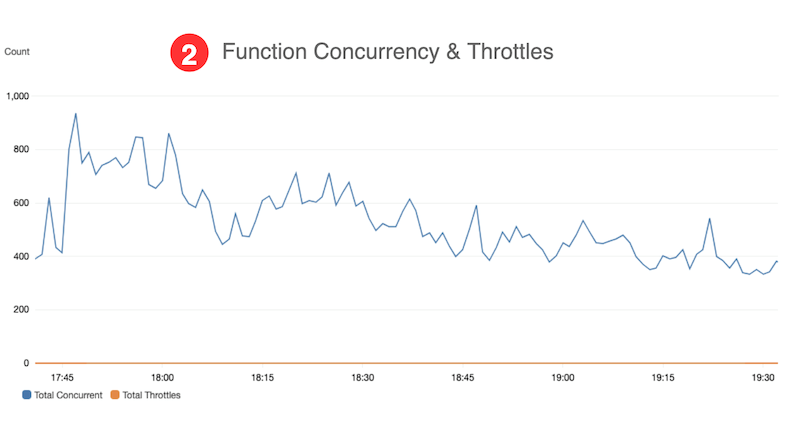 This post discusses how to perform a load test on a serverless workload. The process was used to validate a scale of Simple Trivia Service, a single- and multi-player game built using a serverless-first architecture on AWS. The results show a scale of over 220,000 CCUs while maintaining less than 1-second response time and an error rate under 0.05%.