8 best practices when automating your deployments with AWS CloudFormation

You can integrate automation tools, such as AWS Lambda and AWS Systems Manager, into your AWS CloudFormation templates. With automation tools, you can automate the provisioning of custom workloads on top of the defined AWS infrastructure.

The AWS Quick Start program provides over 170 examples of AWS Partner and AWS native deployments, all of which use AWS CloudFormation templates.

When you use AWS CloudFormation to develop infrastructure as code, first check to see if what you plan to deploy has already been developed and shared with the community. Check for your entire solution as well as aspects of it.

For example, look at AWS Quick Starts, which are open-source and available on GitHub. On the AWS Quick Starts home page, you can search the catalog by partner, product, or keyword, and you can filter by common use cases. Also look at AWS Labs, another open-source GitHub organization with a number of sample AWS CloudFormation templates developed by AWS and by the community of AWS Partners and customers.

While you could use a single AWS CloudFormation template to automate a complex deployment, it’s easier to work with multiple smaller templates. For example, let’s take a three-tier web application with the following parts:

Using a modular approach like this, you and others could reuse the smaller templates. For example, you might copy the database template and use it for another web application.

3. Use existing repositories as submodules 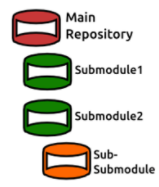 Use submodules to take advantage of work that has already been done. Submodules not only save you time during development but also reduce the need to maintain redundant resources.

The Amazon Virtual Private Cloud (Amazon VPC) Quick Start is a good example. If you’re deploying infrastructure that requires a new VPC, you can add the Amazon VPC Quick Start to your repository as a submodule. Either fork the quickstart-aws-vpc repo to your GitHub account or clone it directly from the aws-quickstart account. Then, your parent stack can call the submodule template as a child stack, passing parameters into it to define the VPC. Parameters include the number of Availability Zones to use, whether to deploy network address translation (NAT) gateways, etc.

4. Use an integrated development environment with linting

The amount of time it takes to launch an AWS CloudFormation template varies from a few minutes to several hours. With complex deployments, a developer might make a simple mistake and not realize it until a stack fails late during testing. Discovering mistakes at he last minute can lead to unnecessary frustration and wasted time.

While AWS CloudFormation templates and scripts can be developed with any text editor, working in an integrated development environment (IDE) can improve the process. An IDE can catch formatting mistakes in real time, can display aspects of your code in different colors to highlight them, and can reformat multiple lines of code simultaneously. Most IDEs can incorporate third-party linting tools to ensure that your code is developed correctly for particular applications, including AWS CloudFormation.

5. Use parameters to define paths to your external assets

Future-proof your AWS CloudFormation templates by avoiding hardcoded paths to external assets. For example, imagine that you have developed a template that deploys an EC2 instance that downloads installation media from an S3 bucket. You could hardcode the path to the installation media as something like this:

If you did, though, future changes to the S3 bucket (in this case, customerbucket)—such as removing public access or deleting the bucket entirely—would cause the deployment to fail.

Instead of hardcoding the path to the installation media, define it as a parameter, and set the URL as the default.

6. Use the same names for common parameters

For example, take the parameter VPCID (the ID of VPC into which the Quick Start is deployed). If you were to deploy the Amazon VPC Quick Start as a submodule, then you would deploy assets into the new VPC by passing the VPCID output from the submodule as a parameter value to your other templates. Using the parameter name VPCID in all your templates simplifies keeping track of your outputs and parameter values.

Here are some other common parameter names to keep the same:

When you build AWS CloudFormation templates, you must test them. Testing typically involves the following steps:

It’s time-consuming to manually deploy AWS CloudFormation templates across multiple AWS Regions and then clean up the assets you deployed during testing. In addition, you may lose track of the assets you deployed. So when you clean up the test environment manually, you may overlook assets that remain active in your account. These overlooked assets can lead to unexpected charges on your next AWS billing statement.

To address these issues, the AWS Quick Start team has developed a process to automate AWS CloudFormation testing using an open-source tool called TaskCat. You enter Regions and parameter values into a YAML-formatted file called taskcat.yml in the root of your repository. TaskCat uses these values to automatically deploy your AWS CloudFormation templates. It then logs the results of the deployment—whether it succeeded or failed (and, if it failed, the reason)—and deletes any assets that were deployed.

When you use TaskCat to test your AWS CloudFormation templates, you can focus on other things while waiting for the deployment to complete. You can also prevent resources that were deployed during testing from lingering in your AWS accounts.

Since AWS CloudFormation templates are used to automate deployments, they are often reused for months or years. As a result, they can get out of date. For example, EC2 instance types may become deprecated, Amazon Machine Images (AMIs) may be removed from general availability, and new functionality may be added to a database service.

Test your AWS CloudFormation templates periodically to ensure that they continue to work as expected. Incorporate new service functionality as it becomes available.

As an AWS CloudFormation developer, you can save time, effort, and frustration when you follow the best practices described in this post. For more, see the following resources:

Let me know your thoughts in the comments, or send an email to quickstart@amazon.com.