Today, at the AWS Summit in Santa Clara, California, we kicked off the 2019 season of the world’s first global autonomous racing league. The AWS DeepRacer League allows developers of all skill levels to get hands on with machine learning through a series of live racing events at AWS Global Summits around the world. The AWS DeepRacer League includes virtual events and tournaments throughout the year.

It was an exciting day as developers put their machine learning skills to the test! After 9 hours, 400 autonomously driven laps, and over 5 miles of racing, the Santa Clara winner was declared. Chris Miller, founder of Cloud Brigade, based in Santa Cruz California, topped the leaderboard and will be the first victor to advance on an expenses-paid trip to the AWS DeepRacer Championship Cup at re:Invent 2019 in Las Vegas, Nevada. With a winning time of 10.43 seconds, Chris and his team came to the Santa Clara Summit with the intent to learn more about AI and ML “I’m excited about machine learning and the technology that is being made available for modern applications”. Chris trained his winning model in one of the AWS DeepRacer workshops at the summit. Next on the agenda for Chris –  he is now preparing for re:Invent by learning more about machine learning and how he can customize his model further. 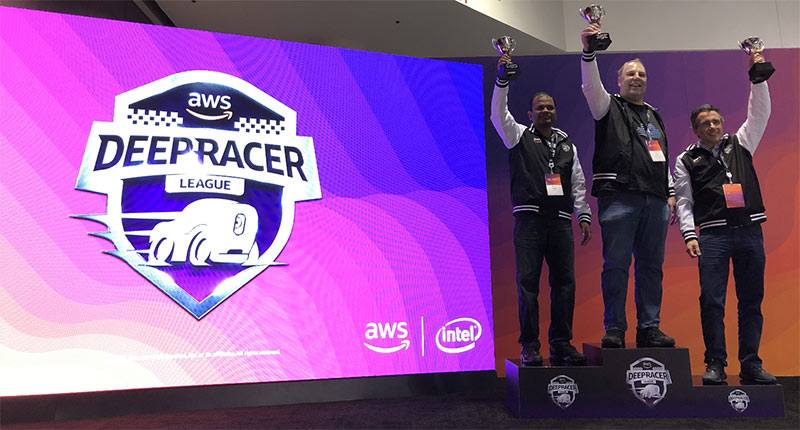 Machine Learning available for all

The league is only just beginning and you don’t have to be at an AWS Summit to start learning about machine learning with AWS DeepRacer. Today we are launching a new online digital training course called AWS DeepRacer: Driven by Reinforcement Learning. The course is available at no cost as part of AWS Training and Certification, within the AWS Machine Learning Developer Learning Path. The course has 6 self-guided chapters and in 90 minutes will help you prepare to compete in the AWS DeepRacer League. You will learn how to build a reinforcement learning model and find tips and tricks about how to tune those models to climb the leaderboard.

The journey to crown the 2019 AWS DeepRacer Champion continues on April 2nd at the AWS Summit in Paris. Follow the live results on the AWS DeepRacer League webpage. While you’re there, plan your next race. And don’t forget, this competition is open to all. If you don’t have an AWS DeepRacer car or your own model, our Summit pit crew is there to help you select a pre-trained model and race it straight-away. Also, if you can’t make it to any of the in-person events, our virtual circuit is coming soon and will allow anyone, anywhere to compete.

See you on the tracks!