We are excited to announce Amazon CodeWhisperer, a machine learning (ML)-powered service that helps improve developer productivity by providing code recommendations based on developers’ natural comments and prior code. With CodeWhisperer, developers can simply write a comment that outlines a specific task in plain English, such as “upload a file to S3.” Based on this, CodeWhisperer automatically determines which cloud services and public libraries are best suited for the specified task, builds the specific code on the fly, and recommends the generated code snippets directly in the IDE.

Although the cloud has democratized application development by giving on-demand access to compute, storage, database, analytics, and ML, the traditional process of building software applications still requires developers to spend a lot of time writing boilerplate sections of code that aren’t directly related to the core problem that they’re trying to solve. Even the most experienced developers find it difficult to keep up with multiple programming languages, frameworks, and software libraries, while ensuring that they’re following the correct programming syntax and best coding practices. As a result, developers spend a significant amount of time searching and customizing code snippets from the web. With CodeWhisperer, developers can stay focused in the IDE and take advantage of real-time contextual recommendations, which are already customized and ready to use. Fewer distractions away from the IDE and ready-to-use, real-time recommendations help you finish your coding tasks faster and provide a productivity boost.

In this post, we discuss the benefits of CodeWhisperer and how to get started.

Bringing the power of ML to the developer’s fingertips 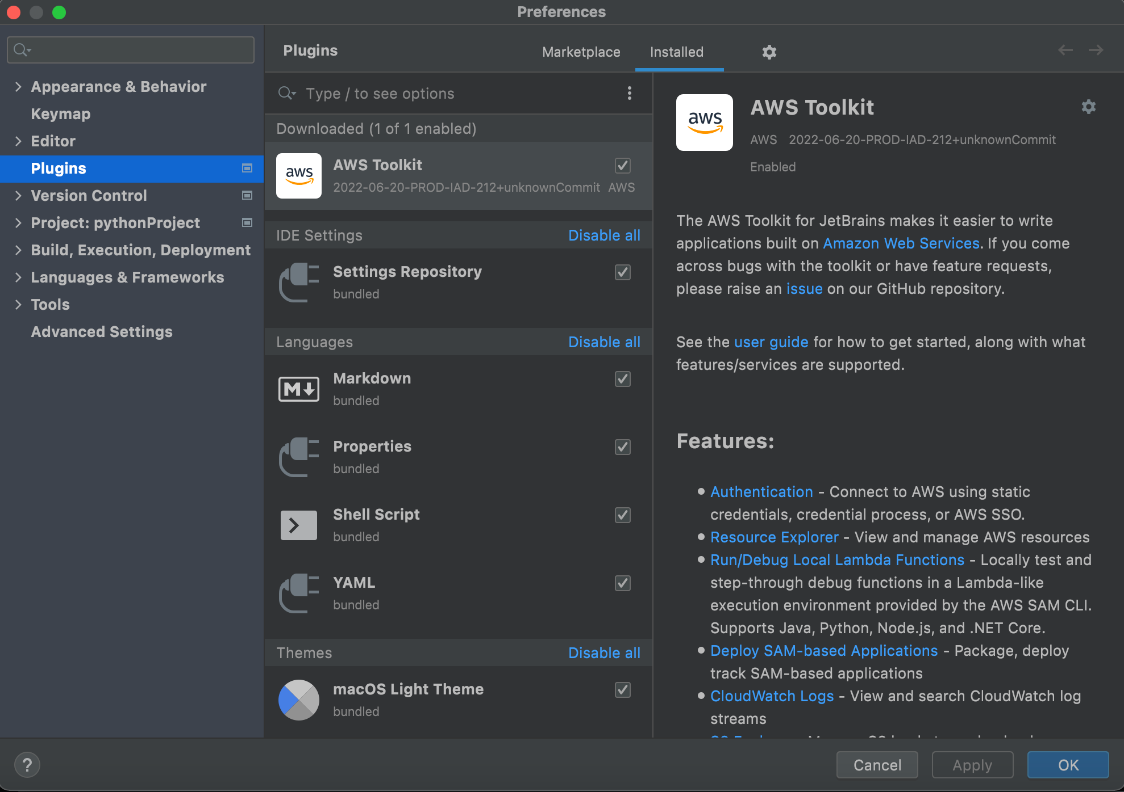 After CodeWhisperer is enabled, you automatically start receiving code recommendations in your IDE as you start writing your code or comments. By meeting developers where you are, we’re making CodeWhisperer easy to use and experiment with. You can get started within a few minutes and start enjoying the productivity benefits right away.

Much more than traditional autocomplete

Traditional autocomplete tools provide single-word completions, for example, a list of properties or methods for an object. CodeWhisperer provides a much better productivity boost by generating entire functions and logical code blocks at a time. Also, CodeWhisperer understands the developer’s intent as expressed through plain English comments. The following example shows how CodeWhisperer generates the entire function to convert a JSON file into a CSV file, while considering the developer’s intent about using the keys in the JSON file as the headers of the CSV file. 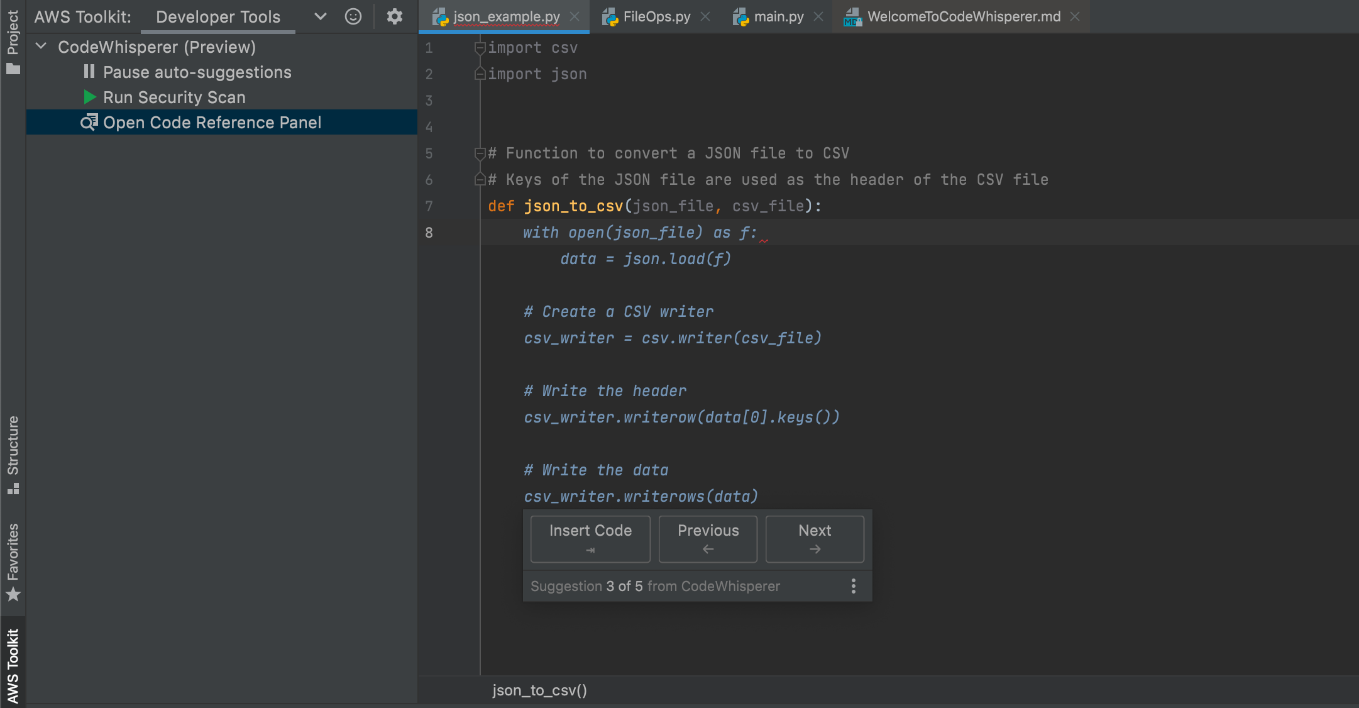 CodeWhisperer makes it easy for developers to use AWS services by providing code recommendations for AWS application programming interfaces (APIs) across the most popular services, including Amazon Elastic Compute Cloud (Amazon EC2), Lambda, and Amazon Simple Storage Service (Amazon S3). As you write code in your IDE, CodeWhisperer automatically analyzes the comment, assembles the code using the relevant cloud services and public software libraries for the desired functionality, and recommends code snippets and even entire functions directly in the IDE that meet best practices. The following example shows how CodeWhisperer can generate the entire function to upload a file to Amazon S3 using server-side encryption. 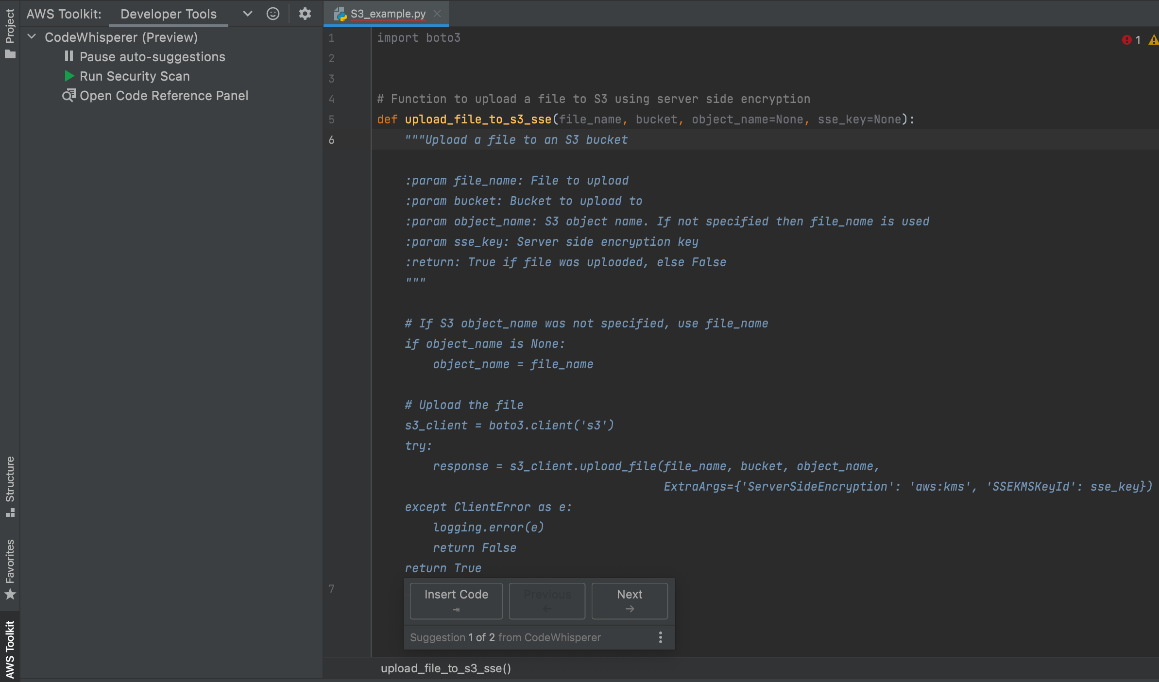 Harnessing the power of AI responsibly

We have trained the CodeWhisperer model on vast amounts of publicly available code to improve the accuracy of recommendations. Simply put, the accuracy of the model is directly proportional to the size of the training data. And while this has helped us on the accuracy front, these types of models can also learn some unwanted patterns. We believe while AI can undoubtedly boost productivity, we have to harness this power in a responsible manner. There are a few standout capabilities that make CodeWhisperer unique in this space.

At AWS, we like to say security is job zero. That’s why CodeWhisperer also provides the ability to run scans on your code (generated by CodeWhisperer as well as written by you) to detect security vulnerabilities. The following screenshot illustrates the security scanning functionality of CodeWhisperer. We have included a code snippet that may cause resource leak. When you choose Run Security Scan, CodeWhisperer detects this vulnerability and displays the issue.

Second, we’re providing a reference tracker that can detect when generated outputs may be similar to particular training data. Although the model has learned how to write code and generates completely new code based on the learning, in very rare cases, an independently generated code recommendation may resemble a unique code snippet in the training data. By notifying you when this happens, and providing you the repository and licensing information, CodeWhisperer makes it easier for you to decide whether to use the code in your project and make the relevant source code attributions as you see fit.

Lastly, we’re implementing techniques to detect bias based on common stereotypes. We have implemented filters that detect obvious bias in the generated code and remove code recommendations that may be considered biased and unfair. For example, imagine a recruiting software that helps hiring managers by automatically short-listing candidates. In the event of a tie, the software depends on a tie-breaker logic. While generating a recommendation for this scenario, it’s possible that an AI model may generate code that favors candidates based on inappropriate parameters. CodeWhisperer can detect bias in its recommendations and filter it out before ever showing recommendations to the developer.

“Distractions are a constant challenge while coding, especially when it’s necessary to switch context to look up code samples and documentation on the web. Amazon CodeWhisperer keeps me focused on the code by automatically offering helpful suggestions right when I need them, so I never have to leave my editor.”

“We are excited to work with AWS on bringing Amazon CodeWhisperer to the IntelliJ Platform. At JetBrains, we aim to make software development a smooth and enjoyable experience. Availability of the plugin for our tools will help developers stay focused in their IDE and reduce the need to search and customize code snippets from the web. As of today, users of IntelliJ IDEA, PyCharm, and WebStorm can start working with Amazon CodeWhisperer right in their IDE, with more IDEs to be supported in the near future.”

During the preview period, CodeWhisperer is available to all developers across the world for free. To access the service in preview, join the waitlist by signing up. For more information about the service, visit Amazon CodeWhisperer.

Ankur Desai is a Principal Product Manager within the AWS AI Services team.

Atul Deo is a Director of Product Management with the AWS AI Services team.