The AWS DeepRacer League is the world’s first global autonomous racing league. There are races at 21 AWS Summits globally and select Amazon events, as well as monthly virtual races happening online and open for racing. No matter where you are in the world or your skill level, you can join the league. Get a chance to win AWS DeepRacer cars and the top prize of an all-expenses-paid trip to re:Invent 2019, to compete in the AWS DeepRacer Championship Cup.

The competition is heating up as the Summit Circuit hit the halfway mark in Sweden this week. It was another exciting day of racing at the AWS Summit Stockholm, where all three of our podium finishers came to the summit to compete in the league.

In third place was Charlie, who also raced in the league at the AWS Summit in London on May 8. He secured a top 10 finish, which wins him an AWS DeepRacer car, but wanted to come to Stockholm to try once more to win. In London, he was just 0.8 of a second from the top spot, with a time of 9.7 seconds. With a little more training on his model, he managed to clinch third place in Stockholm with a time of 9.5 seconds. Although he did not win on his second attempt, Charlie is now at the top of the overall summit leaderboard. If the results stay the same, he will get his ticket to re:Invent 2019. Now he’s a pro at the league, so listen to how Charlie approached building his model.

Amy (@cloudreach) was the second-place finisher and the second female to stand on the podium this season, in her second summit race. Like Charlie, earlier this month she competed in London, where her teammate Raul also took second place. Between races, she worked hard on her model and improved her time significantly from 33.2 seconds in London, to 9.25 in Stockholm.

Although she didn’t win, taking part in more than one race has scored her a place on the overall summit leaderboard, giving her another shot at winning a ticket to compete at re:Invent 2019. Learn more about points and prizes to find out how. Here’s a little insight from Amy and one of her teammates on strategy!

In first place was Jouini Luoma, with a time of 8.73 seconds. He works for Cybercom, as a data scientist and AWS DeepRacer racer. Yes, upon his return from sabbatical, his company gave him this new and coveted title! Jouini’s strategy was to build a few models in advance of the race and test each of them out on the track to see how they performed.

He was first in line at 8AM, with six models that he had been training in the AWS DeepRacer console since its launch on April 29. Each was tuned in different ways to give him the best chance to win. His advice? “Keep it simple; do not over complicate it.” 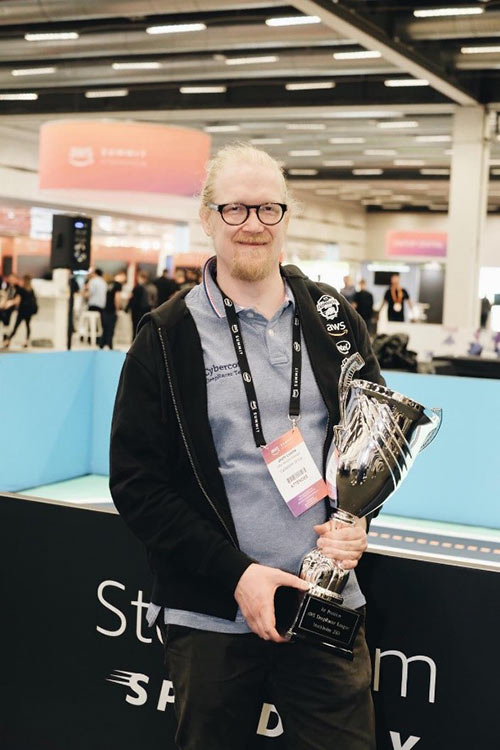 Take a step inside the league with AWS DeepRacer TV

As with all the winners so far, Jouni found success by experimenting with several strategies to apply to his code, to give him the best chance to win. Developers of all skill levels are building their machine learning expertise, and you can now follow your favorites along the way, with the launch of AWS DeepRacer TV.

Episode 1 follows the competition to Amsterdam, featuring Carolinea, Norbert, Kasper, Jesper, and many more developers, all hoping to qualify for a chance to win the Championship Cup at AWS re:Invent 2019. Watch as developers train their models, develop strategies, and discover the potential of machine learning in a fun and competitive environment. Also featured in this episode is the topic of convergence, which is a critical step in the model building process to be ready to race. AWS DeepRacer subject matter expert, Blaine Sundrud, explains more about this topic and some of the basics of competing in the league.

More tips from our experts

The AWS DeepRacer experts are here to help developers through their journey in the league. Sunil Mallya, principal solutions architect at AWS, and also one of the data scientists behind AWS DeepRacer, recently tweeted a tool that helps those who are coming across some common challenges. The logbook analysis tool helps you debug models for a chance to improve lap times and win—both in the virtual and in-person races.

Points mean prizes! The virtual races are open to all from anywhere in the world. They provide you with multiple chances to win tickets to re:Invent 2019—and you can get started for free, with up to 10 hours of training.

The London Loop race is close to finishing, and a new track opens up on June 1. Fuel up on some racing tips in the developer documentation and be on the lookout for more advice from AWS experts as we head to Chicago and re:MARS for the next in-person AWS DeepRacer events.